Market volatility is up in recent sessions, and END_OF_DOCUMENT_TOKEN_TO_BE_REPLACED

As tech takes a tumble this week, there END_OF_DOCUMENT_TOKEN_TO_BE_REPLACED

Shares of Apple have an uncanny ability to report at seemingly the worst possible time. At least, when it comes to the ebbs and flows of the trade situation between the U.S. and China over the past six months.

Apple reported earnings in late April, just before the trade war drastically escalated between the U.S. and China. After falling about 20% in just one month despite solid quarterly results, shares were able to finally recover those losses going into the late-July earnings report.

Again, trade tensions surfaced and despite another better-than-expected quarter, Apple stock took a tumble. This time, though, shares did not suffer a 20% post-earnings haircut. While it hasn't quite shown the steady hand that Roku or Starbucks have this month, Apple has been a dependable beacon of reassurance for the bulls.

However, if further selling pressure materializes, that bullishness may wane as September gets underway. 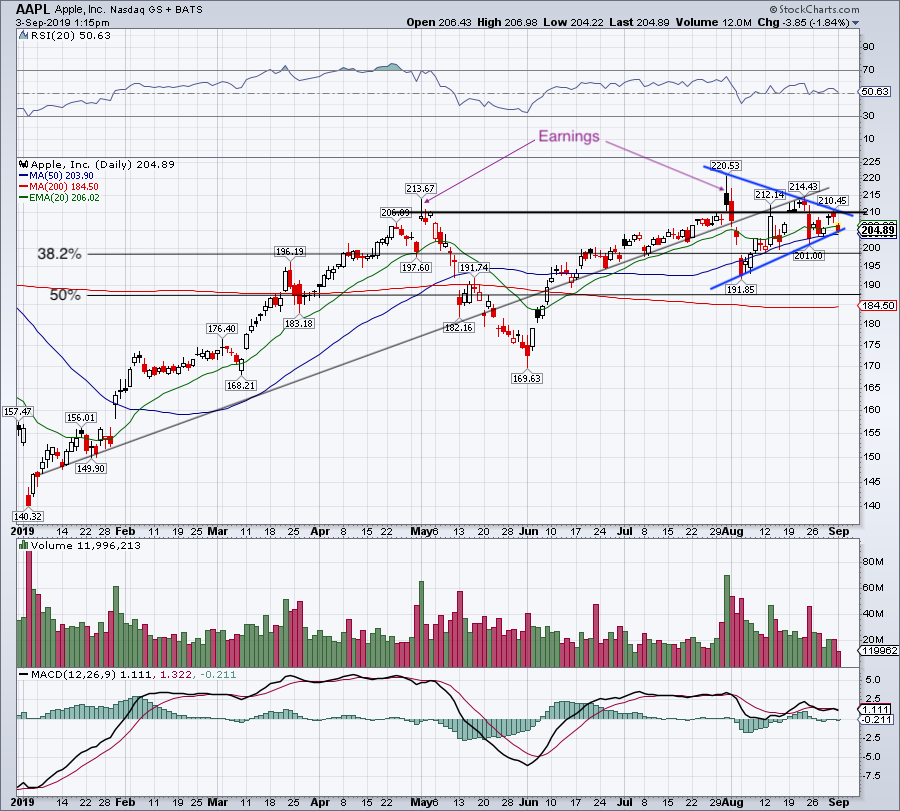 A glance at the chart above shows a few obvious observations.

First, the $210 level is proving to be a tough nut to crack for Apple stock. Its post-earnings price action in May could not maintain above this mark, while this level has also proven difficult over the past six weeks.

Also worth noting? Apple stock continues to make a series of higher lows and lower highs, meaning, it is forming a wedge pattern on the daily chart.

Traders don't have to follow that action on Apple stock, but regardless, a wedge setup is what's formed on the charts. Making uptrend support even more important is the 50-day moving average, currently near $204.

If Apple loses this mark, it will be a blow to the bull case in the short to intermediate term. Particularly if the stock doesn't quickly reclaim this mark. Below the 50-day and AAPL stock may decline to the 38.2% retracement near $198. Below that and the August lows are on the table.

On the upside, see if Apple stock can push above $210. If it can, shares will be above stiff resistance and downtrend resistance. It also opens the door to a run up to the $220 mark.