Investors Too Quick To Cash Out

If the events of the past two weeks have taught us any lesson, it’s that investors are only too ready to throw out the proverbial baby with the bathwater. The slightest appearance of bad news, especially as it pertains to the global trade outlook, is still used by many as an excuse to head for the exits. But as I’ll argue in today’s report, this willingness to assume the worst in the face of bad news – and the market’s tendency to bounce back quickly from it – is yet further evidence that the bull market lives on and will continue to surprise investors with its resilience.

U.S. equities have bounced strongly in the last couple of trading sessions as Wall Street’s hopes for a trade war resolution increase. Yet despite these hopes, there's also an undeniable undercurrent of fear that the strong economic foundation on which the bull market rests is weakening.

Stocks in Asia, meanwhile, have bounced from 3 ½-month lows on hopes that the U.S.-China trade war can be amicably resolved. There is still a widespread fear, however, that China’s economy rests on a very fragile foundation. For example, China’s retail sales growth recently slumped to its lowest level in 16 years, as the country’s consumers reduce spending on everyday purchases as well as big-ticket items like cars. Weakening employment and declining income in the wake of the trade war were listed as reasons for the disappointing sales figures.

China isn’t the only country experiencing a retail sales slowdown. According to the Commerce Department, April retail sales in the U.S. fell 0.2% after a sizable 1.7% increase in March. The biggest declines occurred in car sales (-1.1%) along with electronics and appliance sales (-1.3%). Economists are reportedly perplexed by the up-and-down nature of retail sales figures in the last few months as there seems to be no discernible spending trend among U.S. consumers so far this year.

I would argue that the volatility in U.S. retail sales is an extension of the neutrality that has been prevalent in the investor sentiment numbers in the last several months. According to data provided by the American Association of Individual Investors (AAII), there have been an above-average percentage of neutral investors for much of 2019. The extended fence-sitting among individual investors is an obvious sign that great uncertainty prevails over the future direction of not only the equity market, but also the economy. And while neutral sentiment normally carries no forecasting implication for stocks, investor neutrality in the face of an extremely liquid stock market is ultimately supportive of higher stock prices.

My reasoning behind this bullish assumption is that since investors are clearly not over-extended in terms of equity holdings, there is little danger of a major stock market decline in the foreseeable future. Investors have shown an increased willingness to hold cash or safe-haven assets rather than equities, and this means the stock market is less subject to sudden waves of selling panic since individuals have so little skin in the game.

Consider right now some of the leading sectors, all of which are defensive in nature. The following illustration graphs the performance of the real estate sector via the Vanguard Real Estate ETF (VNQ), consumer staples via the Consumer Staples Select Sector SPDR ETF (XLP), and utilities via the Invesco DWA Utilities Momentum ETF (PUI). I’ve made the case in previous reports that these three sectors will likely continue to lead the broad market higher in the coming months, and the forward momentum and institutional demand behind all three sectors argue strongly in favor of this bullish interpretation. 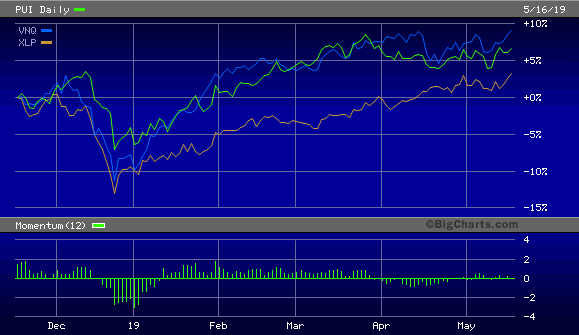 Yet the very fact that market leadership is so incredibly defensive in nature also proves, ironically, that investors are still very much apprehensive about the future. This factor will also support the bull market’s continuation by strengthening the “wall of worry” which every bulls needs in order to survive the challenges it faces. Fear and uncertainty, as reflected by the high demand for safe-haven assets, serve as fuel for future short-covering rallies due to the buildup in short positions engendered by widespread fear. As long as the defensive sectors of the stock market are in the lead, participants shouldn’t be too concerned about a bear market.

There have also been growing calls for China’s government to “do something” in the wake of higher trade tariffs. According to Michelle Toh of CNN Business, Beijing is under pressure to stimulate the Chinese economy. Toh wrote:

Economists now widely expect the government to introduce more stimulus to support the private sector in the coming months.”

Moreover, there are growing expectations even among U.S. investors that the Federal Reserve might step in to stimulate the financial market by lowering interest rates. Fears of a full-blown trade war have given rise to a belief among some economists and investors that the Fed will cut its benchmark rate within the next eight months. There is currently an 80% chance of a rate cut by January 2020, according to the CME’s FedWatch Tool.

The fact that so many observers are calling for stimulus is, if nothing else, an additional sign that investors are extremely vigilant and concerned about the sudden appearance of a bear market. The Fed itself has already shown a willingness earlier this year to capitulate to the market's demands for a less strict monetary policy. This bodes well for the bull's continuation, for bull markets normally don't end until central banks remove the proverbial punch bowl by tightening monetary policy.

Yet another important technical factor that has helped the stock market maintain its equipoise in the face of rising volatility is the continued surge of its intermediate-term internal momentum. One of my favorite measures of broad market internal momentum is the 120-day rate of change in the 52-week new highs and lows on the NYSE. This indicator has historically shown the market’s intermediate-term path of least resistance. When the indicator is rising steadily over a period of several weeks-to-months, the integrity of the intermediate rising trend in the S&P 500 Index is virtually assured.

As you can see here, 120-day high-low momentum on the Big Board continues to rise even in the face of the recent choppy market environment. This should allow the bulls to eventually recover the short-term trend and push the SPX to higher levels by later this month. 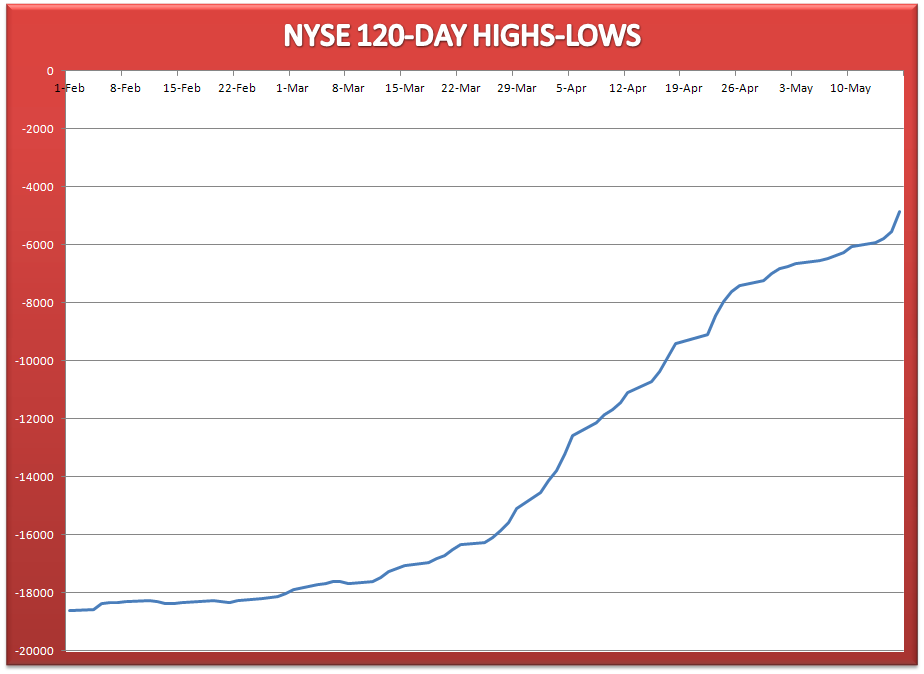 The latest pullback in the major averages also did a remarkable job of improving the market’s investor sentiment profile, both on a short-term and an intermediate-term basis. Shown here is the intermediate-term Rydex Funds Nova/Ursa Ratio Sentiment Indicator. This indicator measures the degree of bullishness or bearishness among traders of the Rydex family of bull and bear mutual funds. Right now, fund traders clearly favor a bearish outlook for equities. This is good news from a contrarian perspective since it suggests that there has been a big rise in short selling and put buying. As previously intimated, this increases the likelihood that a short-covering rally will take place once the market’s latest fear over the trade war has dissipated.

From a fundamental perspective, the basis for a continuation of the bull market in the face of mounting trade war concerns remains intact. According to data compiled by FactSet, the forward 12-month earnings per share (NYSEARCA:EPS) for the S&P 500 continues to trend higher and is at a 10-year high right now. This will also give the short sellers something to seriously ponder once the market’s latest wave of fear has completely dissipated. 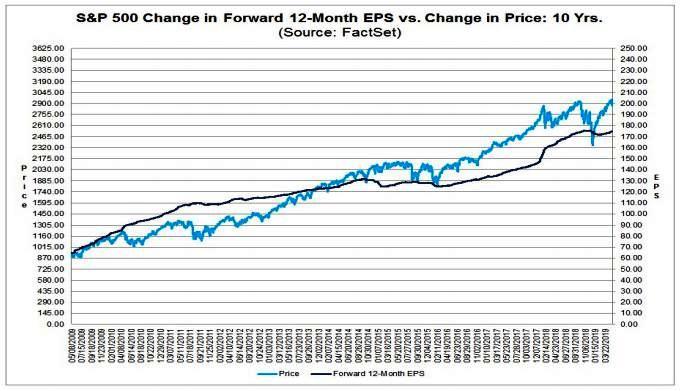 Nonetheless, fear and uncertainty will likely continue to plague investors periodically throughout 2019 just as it has in the previous years. Investors will get defensive at the first signs of trouble, and this bodes well for the defensive segments of the stock market in the coming months. This includes the utilities, consumer staples, and real estate. I also expect the S&P 500 Index (SPX) to eventually plow through its previous high by later this spring and continue making new highs into the summer months.

For now, though, investors should maintain a bullish intermediate-term stance but hold off on making new commitments until the S&P 500 has decisively closed above its 15-day moving average on a weekly basis. While the SPX has recovered almost half its losses from the last two weeks as of May 16, the index stopped short of closing above its 15-day moving average (below). This implies that the bulls haven’t yet completely recovered control of the short-term trend. Once the SPX has broken above the 15-day MA, however, it should encourage additional short covering. 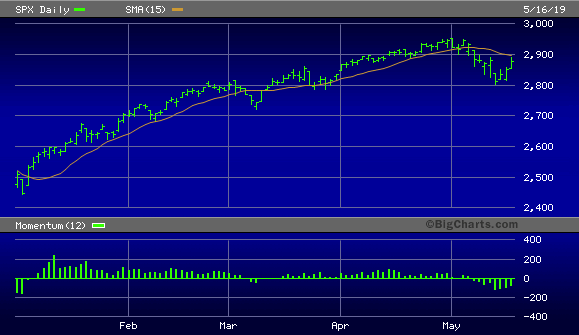 On a strategic note, my trading position in my favorite market-tracking ETF, the Invesco S&P 500 Quality ETF (SPHQ), was stopped out on May 13 after the ETF fell under the $31.70 level on an intraday basis, triggering my stop loss. This puts me back in a cash position in my short-term trading portfolio. Meanwhile, investors can maintain longer-term positions in fundamentally sound stocks in the top-performing consumer staples, real estate and utilities sectors as we wait for the latest short-term market weakness to dissipate.