Disk-drive demand continues to be warped by the END_OF_DOCUMENT_TOKEN_TO_BE_REPLACED

Anything perceived as scarce and getting scarcer will see its price rise and eventually become overvalued.

Today — with global economic growth patchy and monetary policy shifting fast — investors see certainty and predictability in short supply and have been bidding up assets viewed as containing these rare attributes in high concentrations.

This helps explain the persistent compression in government-bond yields, attracting and reinforced by massive flows of cash into fixed-income funds. The rush for “stability” also animates the crowding of investors into the elite class of big growth stocks believed to have the most durable profit streams. And it offers a clue as to why assets built to be boring and slow-moving have become some of the highest-momentum winning trades in the markets.

It’s now worth asking whether this tilt toward assets deemed safe or predictable has overshot the mark. Because after all, the world is always uncertain and unpredictable, even when investors are highly confident in how things will turn out (see the January 2018 market peak). A consensus that things are unusually uncertain today can just as easily be a trap as a reliable guide.

It’s become common to point to the $13 trillion or so in negative-yielding bonds in Europe and Japan as both a reflection and a cause of the craze to lock in certain returns elsewhere. Certainly this pool of securities has anchored U.S. Treasury yields below where economic conditions would seem to dictate — and has made the Federal Reserve’s short-term rate target of 2.25-2.5% appear a wild outlier.

The refusal of the 10-year yield to lift much above 2% even as bullish bond sentiment has appeared extreme for weeks is a testament to this. This isn’t truly a bond bubble, despite this term being thrown around. A bubble requires an open-ended “greed” storyline promising massive upside, which the rationale for owning bonds at today’s prices lacks.

But it’s a collective determination that inflation will stay low for years to come, central banks are trapped and growth acceleration is unlikely.

Ned Davis Research looked at prior periods when bond bullishness hit an extreme and a buying frenzy sent yields rushing to an important low. This chart hints that the recent low in the 10-year yield and reversal higher could prove consequential. 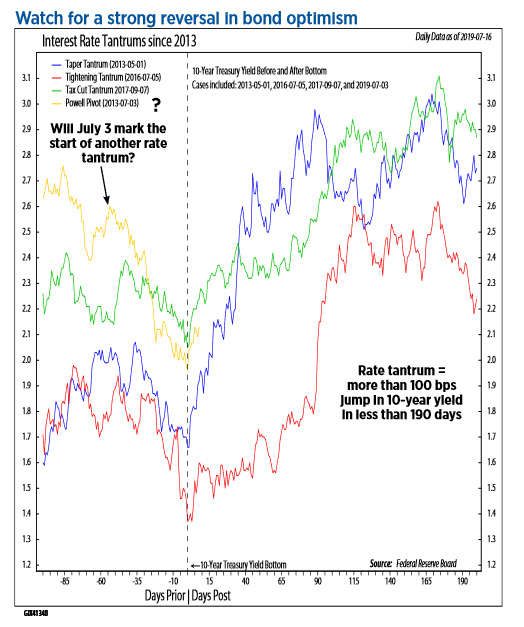 In stocks, the “certainty trade” shows up in the high demand for promises of “low-volatility” equity exposure. The most popular ETF packed with the lowest-volatility blue chips in the S&P 500 this year (SPLV) has nicely tracked the similarly popular fund containing the S&P 500 stocks exhibiting the best price momentum (MTUM). 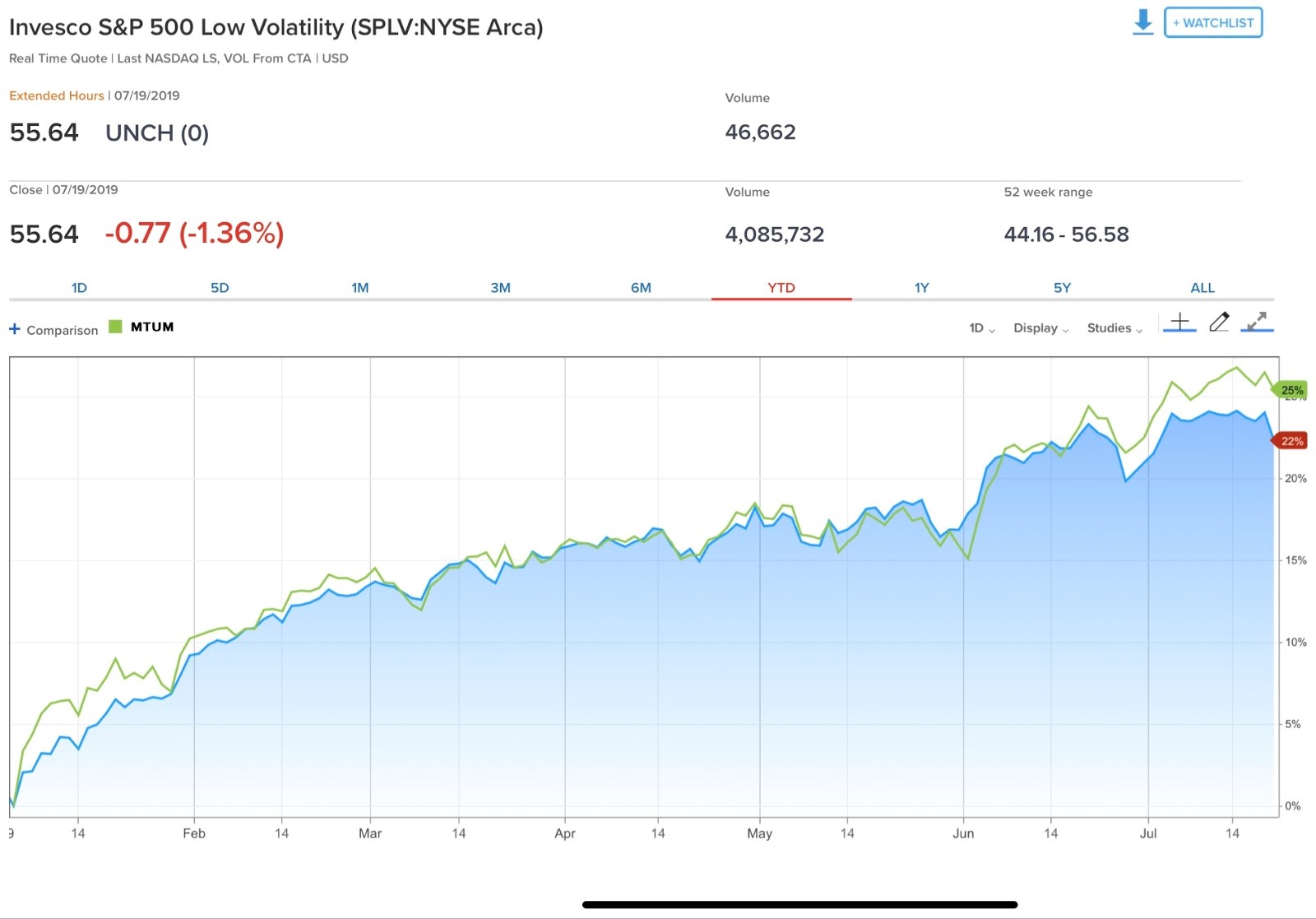 Not unrelated: the gaping premium in returns and valuation enjoyed by big growth stocks — loved for their enduring competitive advantages, high-margin businesses and lack of sensitivity to every economic blip and shudder. 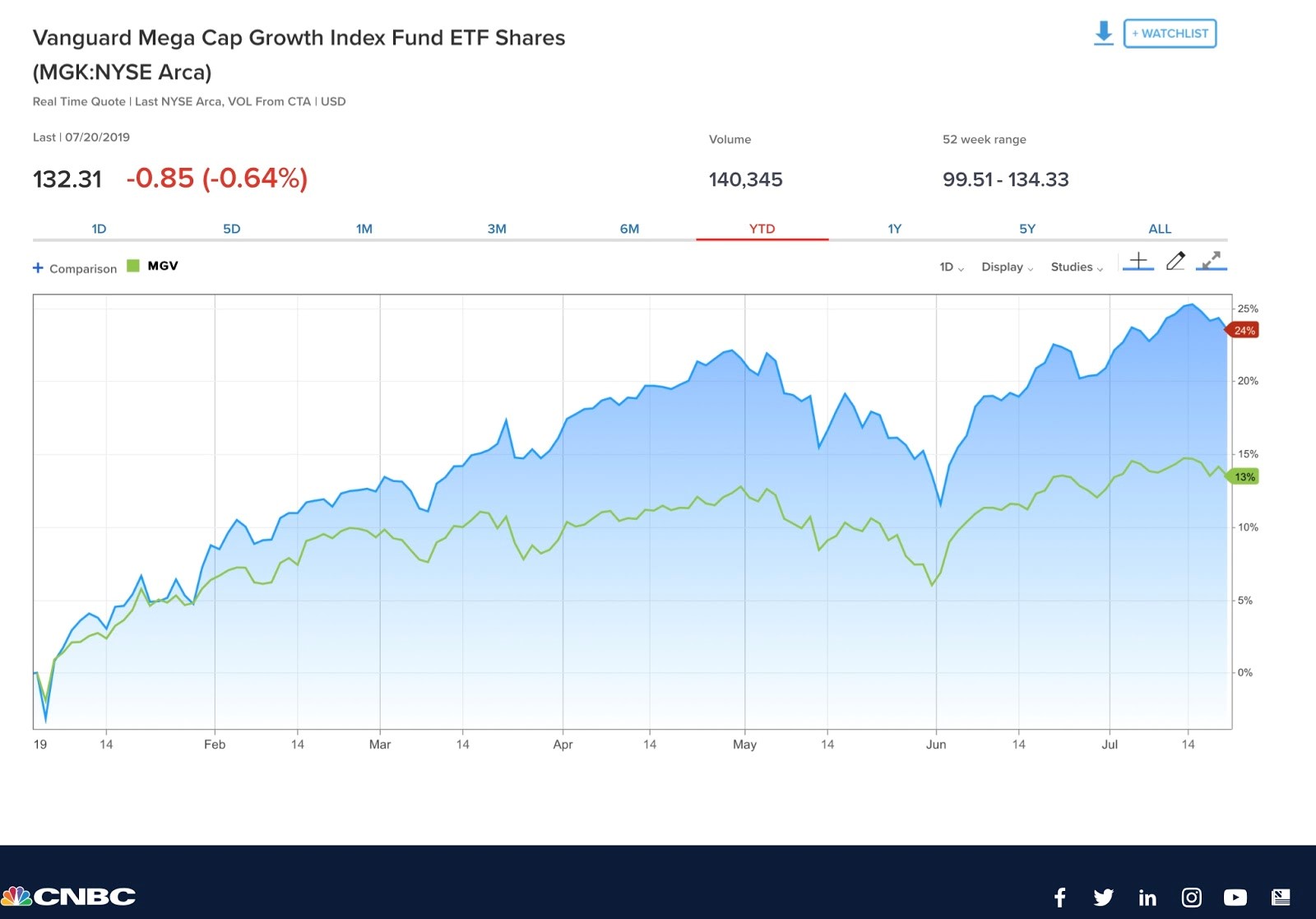 It’s common to observe that secular-growth stocks do better when broad economic growth is faltering. But there is also an element of simply joining the crowd in the most popular stocks.

And, on the flip side, “risk or uncertainty factors are close to record historic levels of cheapness. … Companies with a high level of ‘analyst disagreement,’ measured by dispersion among EPS estimates, are trading at a notable 51% discount” to their long-term average.

This chart from J.P. Morgan offers a visual of this behavioral pattern. 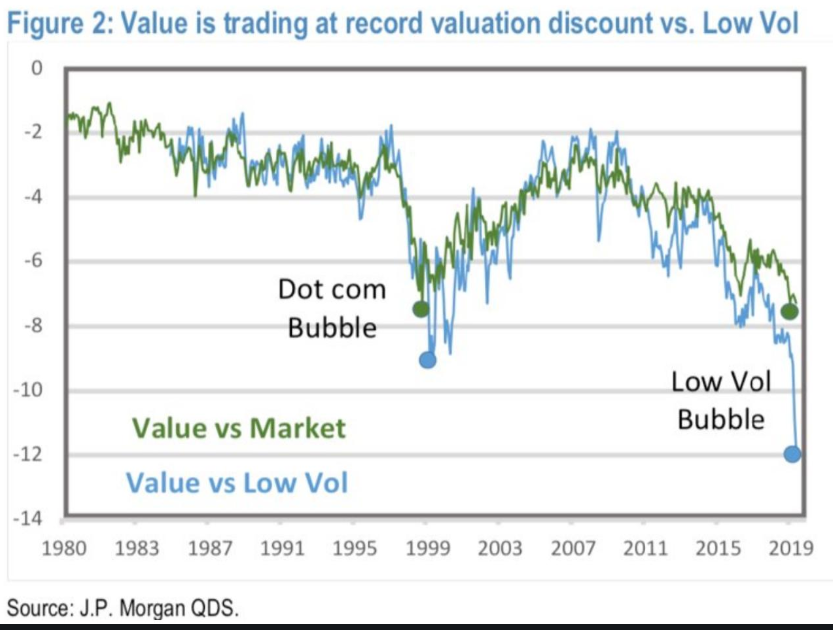 Even on a sector basis, this aggressive bid for the supposed “sure thing” and shunning of cyclical and policy risk is on display.

Jared Holz, health-care-stock trading strategist at Jefferies, noted this with a tinge of exasperation late last week: “All that matters is momentum. Like everything else, investors are willing to pay up for growth at any price in the healthcare space, ... Investors would rather just hang out in stocks that go up every day though on pure numbers possess less upside than stocks that are (more) out of favor. And that has been a winning strategy so as much as we would like to think that there should be a bit more reversion in the market, it is not happening.”

This manifests in the wide canyon in returns to medical-device stocks — gauged by the IHI ETF here — and health-care providers, the IHF. 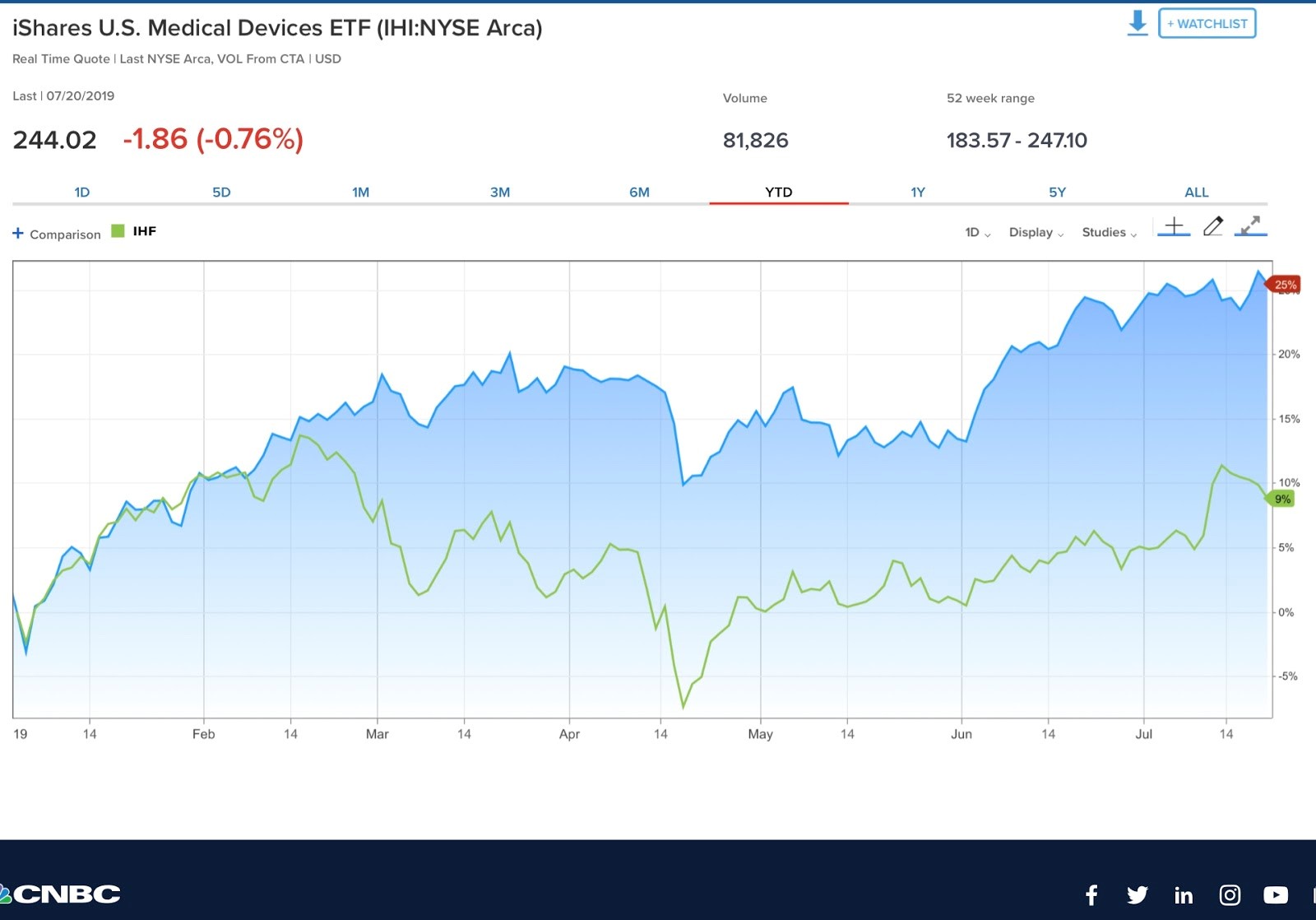 All these examples add up to a clear theme but not a clear course of action for investors. Cheap-looking, controversial and highly cyclical stocks have lagged for years and often struggle in the later phases of an economic cycle. Even when value strategies did great, such as in the early 2000s, it began in the crucible of a bear market rather than as a gentle handoff while the S&P was near a record high, as it is now.

There have been signs that the neglected parts of the market might have bottomed on a relative basis, with banks holding firm lately and transportation and auto names improving.

If indeed the Fed cuts rates next week as expected and it’s seen as a preemptive move to sustain the expansion, that could be an excuse for the areas lately seen as “too risky” to work again.

The clearest takeaway might be for investors to resist falling too hard for the promise of “certainty at any price.”