Though the novel coronavirus has forced a rethink in many sectors, particularly those involving holistic or natural therapeutics, the cloud hanging over Aurora Cannabis (NYSE:ACB) is very dark indeed. Sure, Aurora Cannabis stock has finally demonstrated some signs of life. However, it’s going to take a gargantuan effort – and some good fortune heading its way – for ACB to make sense.

As you know, the cannabis sector has been in bloom recently due to the electoral victory of Joe Biden and Kamala Harris. While I don’t want to dismiss entirely the ongoing lawsuits filed by the Trump campaign, the probability is very much that – unless team Trump can show hard evidence to the contrary – that Biden will be the President next year.

Naturally, Aurora Cannabis stock spiked higher on the development. After a torrential year with the pandemic, the ensuing economic crisis and the subsequent political vitriol, it was nice to get some clarity regarding future governance.

More importantly for the cannabis sector, Biden and Harris have committed to decriminalizing marijuana, which is a significant step forward.

However, before you dive into Aurora Cannabis stock, be mindful that decriminalization doesn’t equate to full legalization. Historically, Biden has been opposed to recreational marijuana, marking a conspicuous contrast with the progressive element of the Democratic party.

Although he may cave in – after all, cannabis represents strong economic opportunities that we desperately need – it’s no guarantee.

For one thing, Biden may not have full control of the government. Realistically, the Democrats must win both runoff races in Georgia to secure the tie-breaking vote in the Senate. It could happen but the political divisiveness in our nation makes this unlikely.

Moreover, let’s not forget the main reason why skepticism should be a part of your analysis on Aurora Cannabis stock. Frankly, the underlying company has been a disappointment, evaporating half of its fiscal 2019 asset base due to paying egregiously for overpriced acquisitions.

In other words, Aurora is in a rough situation, which may lead to further volatility down the road.

A Long Shot in Japan Could Lift Aurora Cannabis Stock

If I were a betting man, I’d say that Aurora Cannabis stock has a better shot of rising higher from here than President Trump does of winning the 2020 election. Of course, that’s not saying much because the chances of Trump winning would involve a legitimately disputed election being decided by Congress.

Still, here’s the thing – most everybody has dumped on Aurora Cannabis stock for the obvious reasons and then some. Personally, I’d rather not repeat the talking point. Instead, let’s do this – ACB is probably a name 90% of investors should avoid. But if you’re in that 10%, all roads may lead to Japan.

First, one of the reasons why Wall Street initially appreciated Aurora Cannabis was the company’s advantage in international expansion. At the time, global legislative momentum suggested that cannabis was steadily shedding its stigmatized image. And among the key markets was Asia, specifically for medicinal and therapeutic applications.

Second, the novel coronavirus pandemic is the perfect catalyst for a retry in Asia. For instance, the Washington Post detailed how Covid-19’s disruptiveness impacted Americans sleeping schedule.

Potentially, cannabis-based products such as cannabidiol (CBD) – essentially cannabis without the high – can offer natural relief. With cases starting to spike throughout the world, the importance of CBD could impact Asia.

Third, Japan is an incredibly dynamic market, if cannabis evangelization can take root. Under strict government protocol, CBD is actually legal in Japan. You can color me surprised. And according to Japanese Clinical Association of Cannabinoids chief director Dr. Minoru Arakaki, “Japan has a history of cannabis cultivation of more than 10,000 years.”

I guess you learn something new every day! 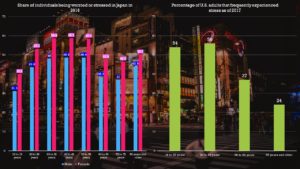 Should public opinion in conservative Japan change, however, CBD could very well soar. According to a 2016 Japanese survey on stress levels in the nation, an average of 42% of males and nearly 52% of females felt stress across age brackets from 12 years and higher.

Contrast that with the U.S. From age brackets of 18 years and older, an average of 43% felt stress. However, from 50 years and older, American average stress levels dropped to 31%. That means the usage of CBD for stress-related reasons will be limited to younger, working individuals.

But that’s not the case in Japan. Generally, from 20 years to the great beyond, the Japanese have a consistent level of high stress. Cynically, this translates to a higher demand for cannabis firms that specialize in or are willing to pivot to Japan-compliant CBD products.

Still, whenever I think about Aurora Cannabis stock, I can’t help but think about the drag racing scene around the middle of the film, The Fast and The Furious. In it, one of the protagonist’s friends ends up racing the story’s main antagonist. At first, the good guy seems to be pulling ahead for the victory after boosting his car with NOS.

Unfortunately, the antagonist had been doing these races for so long. With a wry smile, he responded, “Too soon, junior!”

What in the heck does this have to do with Aurora Cannabis stock? Well, the underlying company may have hit the NOS button prematurely by expending its resources on overpriced assets.

Further, with the rough shape that the company is in, I’m not sure if management is willing to take on a far-flung Hail Mary in Japan. Instead, the execs probably want to focus on encouraging developments in the U.S.

Which is a darn shame because the Japanese market, with enough time, could be huge for any company willing to make the bet on cannabis evangelization. Further, the added stress of the coronavirus could make the Japanese consumer even more willing to try CBD.

Perhaps Aurora can hang around for it to take a shot. But really, this is an extremely high-risk, high-reward idea.