If You Invested In Microsoft 10 Years Ago, Here’s How Much You’d Have Now

On Friday, Oct. 25, it was announced that Microsoft beat out Amazon Web Services in securing a $10 billion deal with the Pentagon.

While Microsoft’s shares have done well over the years, any individual stock can over- or underperform and past returns do not predict future results. 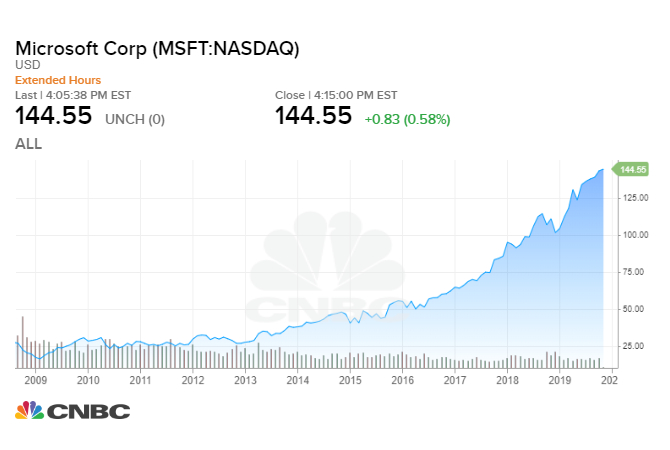 How Microsoft Got Its Start

Microsoft got its start in 1975 when its founders, Bill Gates and Paul Allen, launched the company’s first product: A BASIC language interpreter that ran on the MITS Altair 8800 computer, the first commercially successful personal computer. BASIC stands for “Beginner’s All-purpose Symbolic Instruction Code,” and is a family of general purpose programming languages that’s designed to make operating computers a more user-friendly experience.

By 1981, Microsoft launched its Microsoft Disk Operating System (MS-DOS), which ran on IBM personal computers. In 1983, Microsoft released its new software, “Windows,” to improve the MS-DOS interface. Within 10 years of launching Windows, Microsoft had released Windows 1.0 in 1985, Windows 2.0 in 1987 and Windows 3.0 in 1990. With each iteration, computer use became more accessible to everyday people, and as a result, use of Microsoft PC software soon became commonplace in homes, offices and schools.

Microsoft’s Challenges Along The Way

While Microsoft has consistently been at the forefront of tech innovation, it has also faced challenges.

On May 18, 1998, Microsoft was sued by the Department of Justice for allegedly breaking federal antitrust laws, a case that’s been compared with recent antitrust investigations by the DOJ against Google.

During the trial, the government claimed Microsoft had been illegally acting as a monopoly by making it difficult for consumers to install competing software on Windows computers.

Initially regarding the case, Microsoft said that once a Windows PC boots up for the first time, a person can “set up the PC to display another, competing software program offered by the PC maker or installed by the consumer every time the PC is turned on.” The company said the case was “completely groundless” in court filings a couple months later.

In June 2000, Microsoft lost the case and was ordered by the DOJ to divide its company into two parts, with one half owning its operating systems and the other owning software products. However, the ruling was overturned in 2001 by a federal appeals court.

A 2002 final judgment imposed several rules on Microsoft that were meant to provide a better experience to consumers and a more level playing field for other technology companies. For years after the agreement Microsoft filed reports documenting its compliance.

Jump to 2013 when Microsoft acquired mobile phone carrier Nokia for $7.6 billion. This was Microsoft’s attempt at breaking into the mobile space, especially since the purchase came with Nokia’s patent portfolio. However, just two years later, in July 2015, Microsoft announced that it had written off the deal and cut 7,800 jobs in the process. Microsoft wanted to streamline its phone business in the near term to “better focus and align resources,” a news release from the U.S. Securities and Exchange Commission said.

By 2017, Joe Belfiore, corporate vice president at Microsoft, announced in a series of tweets that the company would no longer develop new features or hardware for Windows Mobile products, and by 2019, the tech giant officially announced the end of Windows Phone support by Microsoft.

Through the years, Microsoft has managed to bounce back from adverse happenings. In December 2018, it briefly held the title of “the world’s most valuable publicly traded company,” just behind Apple. Many attributed Microsoft’s chart-topping stock moment to strong leadership from CEO Satya Nadella, who tripled Microsoft’s stock by July 2018, after just four and a half years in charge. Nadella succeeded former Microsoft CEO Steve Ballmer in 2014.

The Latest on Microsoft

Now that Microsoft beat out rival cloud computing services for the Joint Enterprise Defense Infrastructure deal, otherwise known as “JEDI,” with the U.S. Defense Department, Microsoft has proven the worth of its cloud computing service, Azure, in a major way. Microsoft’s victory is “the best possible validation [Microsoft] could get,” said Jim Cramer, host of CNBC’s “Mad Monday,” during a segment of the show on Oct. 28, 2019.

Under the JEDI contract, Microsoft will construct an enterprise cloud infrastructure for the purpose of aiding the Defense Department’s operations. “The Pentagon’s basically saying that Microsoft’s cloud platform is just as good as Amazon’s, or at least close enough for government work,” said Cramer.

If you are considering getting into investing, experts, including Warren Buffett, often advise starting with index funds, which hold all of the companies in an index, such as the S&P 500. Because index funds fluctuate with the market and aren’t tied to the performance of a single business, they’re less risky than individual stocks, making them a safer choice for beginners.