Those who read me often know that I am long Adobe Systems (ADBE) . They also know that I have been a supporter of the software / cloud industry, who cut bait across the industry when share prices wavered, and very recently started re-entering several of these names in smaller size. Except for Adobe. Never cut back on that one.

I have been a long-time fan of this name that is perhaps best known for tools used by creative professionals as well as folks at home. Even if Adobe survived last week's rotation somewhat better than its peers, what now? Even here, those long the shares for more than a few months still have profits to protect.

Adobe posted adjusted EPS of $2.05 for its fiscal third quarter on revenue of $2.83 billion. These results illustrate an $0.08 beat for profits on sales growth of 23.6% year over year -- also a beat.

In my opinion, this was another excellent quarter put to the tape by CEO Shantanu Narayen who has gotten investors used to revenue growth of not less than 23%, and not more than 25%. The epitome of consistency.

So, why the overnight selloff that has carried into the Wednesday session? Forward guidance was light. The revenue outlook for the fourth quarter would now stand at $2.97 billion versus industry consensus of $3.02 billion. Fourth-quarter EPS guidance would now be $2.25, a nickel below what Wall Street is looking for.

If one listened to, or read the earnings call, then one knows that subscription bookings growth from the Marketo mid-market account-based marketing and analytics platform did not meet expectations. In addition, there were delays in Analytics Cloud subscription bookings. Adobe states that these issues are being addressed through investment in demand generation and inside sales.

Do I trust Narayen to get this right? I do.

I did notice that though revenue ran from nearly $2.3 billion for third quarter 2018 to more than $2.8 billion for third quarter 2019, net cash provided by operating activities actually dropped to $922 million from $955 million over that same period. That does not thrill me all that much. However, cash on hand is up and total assets grew by nearly $900 million while total liabilities (sans stockholder equity) increased by little more than $400 million. I do like that. 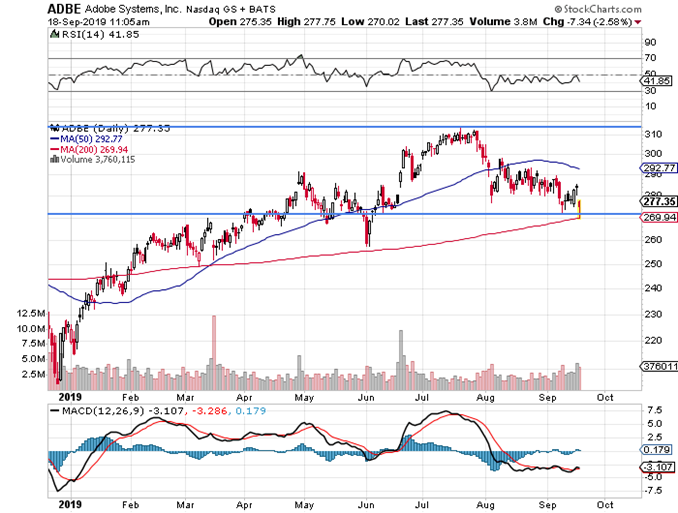 Taking a look at the chart, above, the July highs of $313 now seem a long way off. The shares seem to have found -- for now -- support at the 200-day simple moving average just below $270. My thought is that as long as ADBE holds that line, or better yet closes on Wednesday above the $272-ish low of one week ago, that these shares would remain unbroken. Keep in mind, there a lot of balls in the air here.

Between economic growth depending on global trade and a yield curve that, as is, discourages capital investment, there is enough to consider. One more item to consider would be the company's Nov. 4 investor / analyst event.

I have found eight analysts that have opined on Adobe this morning. Five of the eight rate as five-star analysts. Four of those five have either reiterated or maintained "buy" ratings or the equivalent on this stock and have average price targets of roughly $317 on the stock. There is one "hold" rating among the five.

My target price for this name has been $355, so I have been way above the Street. Obviously, I will have to bring that target in a bit, but let me tell you this: If ADBE hangs tough at the level here, I am more likely to add than subtract.

My thinking is that I probably want to have a larger long position going into that Nov. 4 event than I have right now.