How Facebook Stock Could Climb Back to All-Time Highs

Shares of Facebook have been trading much better over the last six months. Shares are flirting with a move back over $200 and if it can get there, it could trigger a much higher move back to its all-time highs.

While the stock was hammered in late-May and early June, the rebound since has been impressive. The stock has run from roughly $160 to currently just over $195. That rally of almost 22% stands out, both among FAANG stocks and the overall market.

It helps that Facebook unveiled the Libra cryptocurrency. The fact that the currency has so many large supporters adds credibility to the excitement. Adding even more excitement has been the rally in bitcoin. Even though bitcoin prices have come off the recent highs, its explosive -- although brief -- move to $14,000 rekindled investors' hope that new highs in the cryptocurrency remain possible.

Should it regain and maintain some of that bullish momentum, Facebook stock is likely to benefit as well. 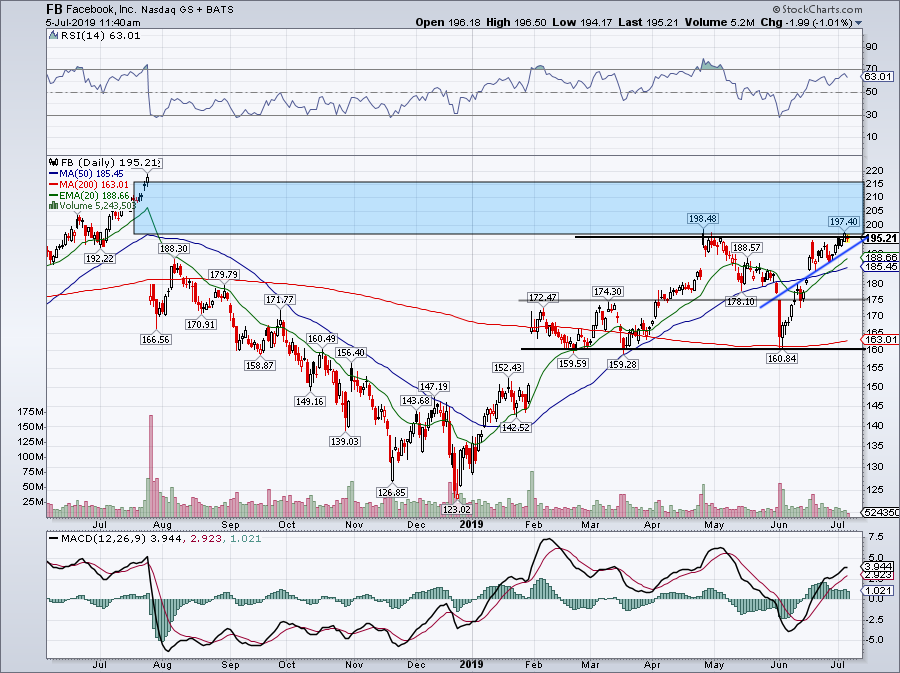 The stock's rally is surprising to some investors, given how much backlash Facebook has been getting. There are privacy concerns and complaints against its platform, while worries over news on elections and other noteworthy world events can sway public opinion. The company has also drawn the ire of regulators, causing concerns on the antitrust front as well.

For Facebook stock, bulls would love to see the stock hurdle this $197 to $198 level. It's where FB stock topped out in the second quarter and where it's struggling now. It's putting in a series of higher lows (blue line) and maintaining above all of its major moving averages. That bodes well for a potential move through $200. If it can push through, investors will be anxious to see if Facebook stock can fill its gap back up toward $215. It it can, new all-time highs will certainly be on the table.

However, we have to keep earnings in mind. Facebook will report its quarterly results later this month and it's the same time last year where the stock plunged lower. Will FB shake off the rust and hit new highs or will history repeat?

Luckily, we won't have to wait long to find out.