Homebuilders Could Be Heading Toward A Bigger Breakout, Trader Says

Homebuilding stocks are hammering out gains this year.

Mark Newton, technical analyst at Newton Advisors, does not see the rally slowing down.

“Homebuilders still look constructive to me,” Newton said Wednesday on CNBC’s “Trading Nation.” “We’ve had a decent uptrend so far this year. We’ve recouped a lot of what was lost last year. As many remember, 2018 was a very negative year for the group. But in general, we’ve almost quadrupled off the lows almost 10 years ago.” 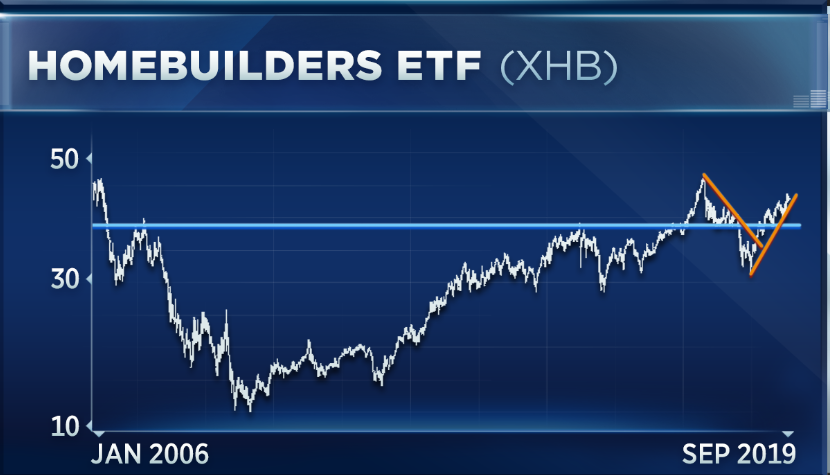 The XHB ETF, which counts Home Depot, D.R. Horton and PulteGroup among its components, tumbled 27% in 2018. That was its worst annual performance since 2008 during the housing crisis.

“The patterns are still very much in good shape. We’re not as overbought as we were really even last year or back in 2013. My gauges of RSI on a monthly basis are about a 60 versus levels that were prior above 70 and in 2013, above almost 80,” Newton said.

Its moderate RSI suggests to Newton that it could have more room to run, possibly as high as $45 to $47. A rally to $47 implies 8% upside.

“Everybody that looks at the housing market tends to first look at the Fed,” Sanchez said during the same segment. “As the Fed has managed to create their midcycle correction, we have seen things that have started to soften -- for example, existing home sales had really softened, we had seen a drop in mortgage applications and housing starts -- all of those are actually starting to bounce.”

U.S. housing starts raced to a more than 12-year high in August, climbing 12.3%, according to the Commerce Department. Single- and multifamily housing construction rose.