Market volatility is up in recent sessions, and END_OF_DOCUMENT_TOKEN_TO_BE_REPLACED

As tech takes a tumble this week, there END_OF_DOCUMENT_TOKEN_TO_BE_REPLACED

The four don’t have much in common save for one eye-catching trend: Exchange-traded funds based on these themes have all made notable gains in 2019, topping the list of the year’s best-performing ETFs.

In first place for the year is the Invesco Solar ETF, up 51%. A market-cap-weighted ETF priced at 75 basis points, it holds 22 stocks tied to solar technology, a popular sub-theme within the larger Environmental, Social & Governance, or ESG, push taking hold in the ETF space. Solaredge Technologies, First Solar and Sunrun are among its top holdings. 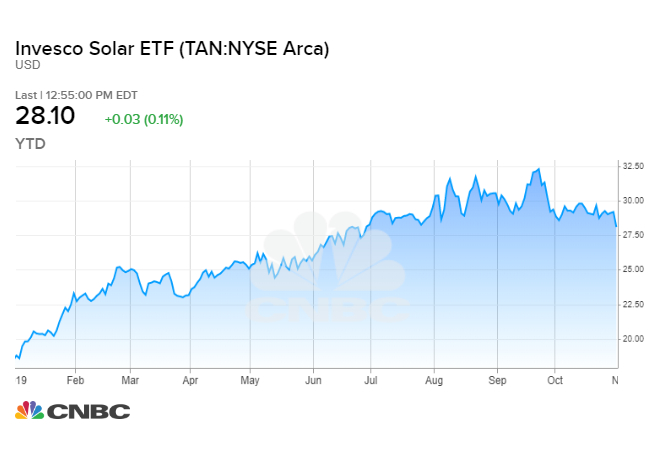 Not far behind TAN is the iShares U.S. Home Construction ETF, up 48% for the year. Also a market-cap-weighted fund, it costs 42 basis points and holds 45 stocks of U.S. homebuilders, which have been having a banner year as homebuilder confidence climbed to new highs. D.R. Horton and Lennar are its two biggest holdings at over 25% of the portfolio. 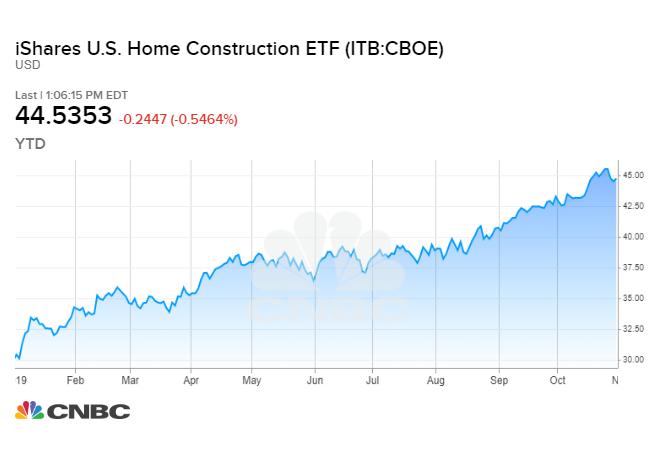 Third up is the VanEck Vectors Semiconductor ETF with a 45% gain. The 25-stock portfolio is market-cap weighted, costs 35 basis points and tracks the widely followed chipmaking stocks. Taiwan Semiconductor, Intel, Nvidia and Texas Instruments are its largest holdings as of Thursday. 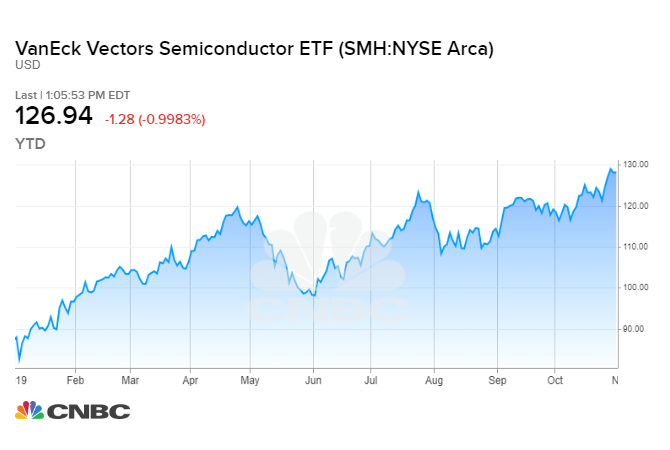 The Global X MSCI China Consumer Staples ETF has a 44% gain for 2019. A market-cap-weighted ETF focused on the Chinese consumer, it costs 65 basis points to own and holds 26 stocks including conglomerate China Resources and liquor producer Kweichow Moutai. 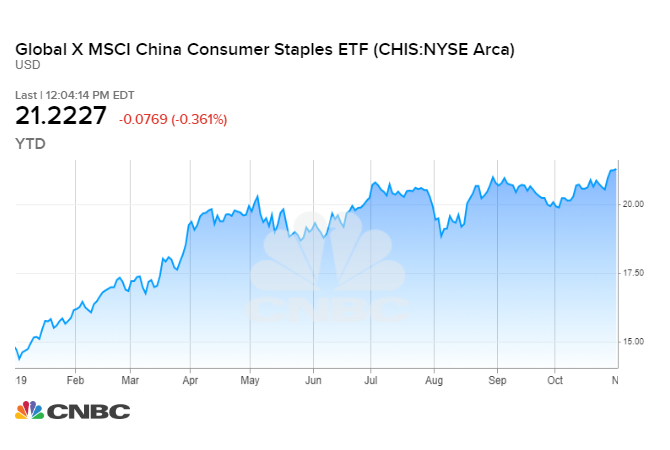 What The Pros Think

“When I think about what’s going on in China, I also think about where we priced expectations for the Chinese economy,” Tim Seymour, founder and chief investment officer at Seymour Asset Management, said Monday on CNBC’s “ETF Edge.”

Despite soft data and troubling predictions on China’s growth prospects from top economic bodies such as the International Monetary Fund — which cited uncertainties around trade and “other geopolitical forces” as reasons for its muted forecast — there’s a chance Chinese consumers aren’t in as treacherous a position as it seems, Seymour said.

“I think there is a broader consumption trend going on in China,” he said. “People forget: Although we think it’s this big industrial and commodity economy, consumption in China has moved from about 30% 10 years ago to about 40%, and it’s moving higher. So, the Chinese consumer has been more resilient here, and they’re not quite the U.S. consumer, but they’re getting there.”

“Even with all of the trade issues, semiconductors are in a secular bull market,” she said in the same “ETF Edge” interview. There is a “lot of volatility with them on the upside and the downside, but we think there’s still a lot of return.”

That falls in line with Bartels’ view that a U.S. recession is still far off if not out of the question.

“We don’t see a recession. We’ve only put that at 30% [probability],” the strategist said. “We do see modest growth. And in a modest-growth environment with the valuations where they are, we think cyclicals are more attractive than the defensive space.”

“We do like cyclicals here, especially if we’re going to get a year-end rally, and we’re starting to move into one of the most positively seasonal periods within the market,” Bartels said. “The market has been faced with a lot of challenges, really hasn’t been going down, and ... the defensive [sectors] have led. But … we find better valuations sitting in the cyclicals, and we still like semiconductors, and we like also the SMH to play semis.”

Seymour, who appears as a regular trader on CNBC’s “Fast Money,” said he also liked the SMH, but more as a gauge for where the market’s headed next versus the ETFs he’d recommend buying.

“If ETFs are telling a story, I’d first look at the SMH, which is the semiconductors, and then I would look at the more either late-cycle ETFs or exposure to the underlying [stocks] and say that this isn’t just about a defensive rally,” Seymour said.

Instead, it could be a sign of a broader rotation into areas of the market that have fallen behind, he suggested.

“What’s fascinating about where we are right now [is] the breakout of banks,” Seymour said. “If you look at financials, they’re kind of getting back above that long-term moving average, which gives you some sense of some confidence in the move, although we’ve been here before. Emerging markets, the [iShares MSCI Emerging Markets ETF, or] EEM, has been sideways, basically, for nine to 12 months, but looks like it’s starting to break out. And then the other cyclical parts of the world. So, look at the [Global X DAX Germany ETF, or] DAX and look at the [iShares MSCI Germany ETF, or] EWG, which is a way to play that.”