Has Bitcoin Entered A Bull Market?

Bitcoin prices have climbed sharply over the last several months, rising more than 60% after reaching a recent low in December.

This strong rally beg the question: after suffering through a long winter, has bitcoin entered a bull market?

Some have answered in the affirmative, contending that the digital currency has indeed entered such territory.

However, others are not so sure, emphasizing that investors should wait back and see what happens before coming to any conclusions.

Bitcoin has been in a bull market since mid-February, claimed digital currency trader Marius Rupsys, citing data culled from his short-term and mid-term algorithmic trading programs.

He emphasized the positive developments surrounding the cryptocurrency, including Fidelity's announcement that it would start custodying bitcoin and U.S. pension funds investing in the digital asset.

Over the last few weeks, prices have moved higher, and it seems we are breaking free of a consolidation period that has lasted for several months, he stated.

Tim Enneking, managing director of Digital Capital Management, offered a similar point of view, stating that when bitcoin prices fell to nearly $3,000 in mid-December, many suspected this to be the bottom.

Bitcoin has benefited from a lot of positive sentiment in recent months, according to industry data provided by cryptocurrency analytics platform TheTIE.io.

"We saw a very strong recovery in sentiment at the end of 2018," and "an even stronger rally in investment sentiment in early February 2019," said Joshua Frank, cofounder of TheTIE.io.

"In March 100 day average sentiment score on Bitcoin peaked to the highest level it has been at since December 2017," he added.

The chart below graphically depicts these changes in sentiment, as well as bitcoin's market capitalization (market cap). 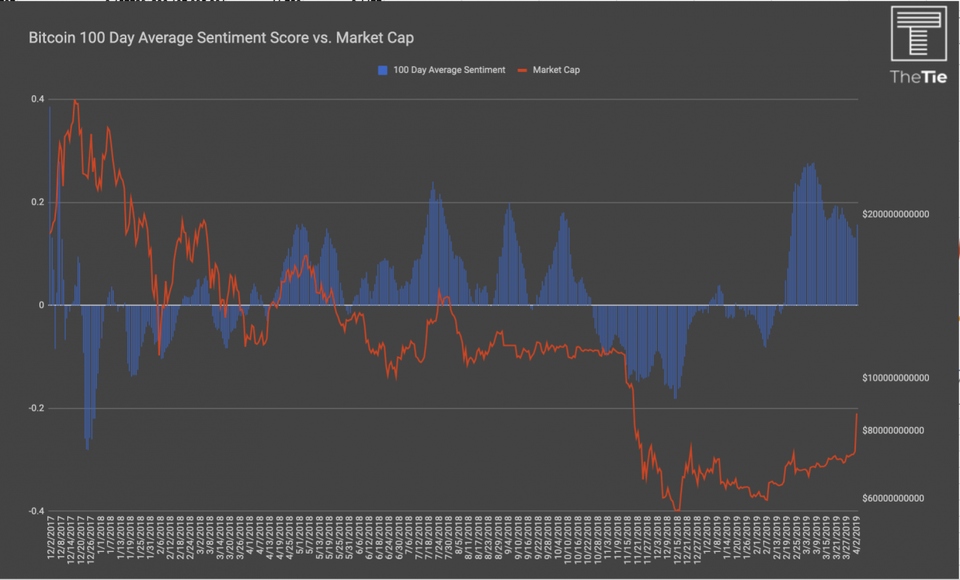 "As is apparent from the chart, 100 day average sentiment score is a leading indicator of price movement," noted Frank.

"It remains strongly positive and is a bullish sign."

While some analysts seemed optimistic that bitcoin has entered a bull market, others appeared a bit more cautious, emphasizing that investors should wait and see how the digital currency performs.

"I do believe that we’ve exited the bear market, but that doesn’t mean we’ve entered a bull market," he added.

"Approaching the market with caution would probably be best as an ounce of prevention is worth more than a pound of cure," concluded Garcon.

While bitcoin has experienced some notable gains lately, this isn't enough to conclude the cryptocurrency has entered a bull market, he said.

Jon Pearlstone, publisher of the newsletter CryptoPatterns, went a bit further in his analysis, pointing to the key importance of the $6,000 price level.

Until bitcoin has established itself above this point, we shouldn't even ask whether the digital currency has entered a bull market, he maintained.