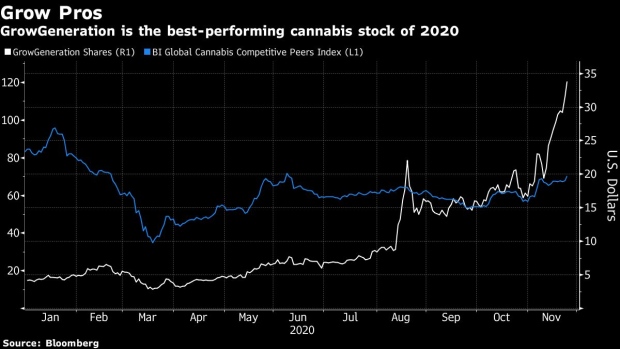 GrowGeneration Corp., the largest hydroponic garden-center chain in North America, is on a tear worthy of its name.

The gardening supply company has gained over 700% so far this year, making it the best-performing cannabis stock of 2020 amid a sector-wide rally on hopes the U.S. is poised for federal legalization after the election.

Investors are drawn to the $1.6 billion retailer, which sells equipment used to grow pot, as it’s one of the few U.S.-based cannabis plays listed on the Nasdaq. It’s also free of the legal risks that growers pose as it doesn’t actually sell the plant itself.

“Our success is directly tied to the growth of the cannabis industry, which is exploding,” Chief Executive Officer Darren Lampert said in an interview.

The initial investment of starting a grow operation can require thousands of dollars in costs for grow lights, fans and other equipment. And while GrowGeneration caters to general at-home gardeners, Lampert said its top focus is on pot. “That’s where most of the money is made,” he said.

With Democrat Joe Biden claiming victory in the U.S. presidential election and five additional states voting to legalize cannabis on election night, shares in cannabis stocks including Halo Labs Inc. and Aurora Cannabis Inc. have soared. This has helped the BI Global Cannabis Competitive Peers index to pare back its year-to-date losses to about 15% from nearly 60% in March.

Within the index, no other stock has gained as much this year as GrowGeneration, which earlier this month posted its 11th consecutive quarter of record revenue, propelling shares even higher.

The company has been touted as the next Home Depot Inc.. But while that retailer suspended its full-year forecast in May due to Covid-19 uncertainty, GrowGeneration increased its guidance. In 2021, the company expects to make up to $300 million in revenue, up 1,000% from the nearly $30 million it ended 2018 with.

“The writing is on the wall,” Craig-Hallum analyst Eric Des Lauriers said. “Legalization is coming and GrowGeneration gets you long-term secular growth exposure.”

But as the stock has climbed, so have bets against it. The company’s short interest has reached 23% of its float, and last week it had one of the biggest increases in short interest relative to tradable shares among Russell 3000 Index companies, according to data from financial analytics firm S3 Partners.

Des Lauriers said the high percentage of shorts has more to do with the stock’s rising price than doubts about the business. Lampert doesn’t take it personally. He noted people short his company in order to bet against the historically volatile cannabis industry as a whole.

“Like anything else, there’s haters all over the world,” Lampert said. “But the shorts have certainly had a hard time at GrowGen of late.”

The retailer has 36 garden centers in 11 states and plans to expand its presence to places embracing the industry, including the five states that just legalized it.

In 2021, the company aims to have 50 locations in 15 states as it buys up competitors in the fragmented industry. Last week, Lampert finalized an acquisition of GrowBiz, the third-largest hydroponics retailer in the country with five stores. He has no plans of slowing down either.