The global semiconductor shortage is a grave challenge END_OF_DOCUMENT_TOKEN_TO_BE_REPLACED

General Electric (GE) has been a terrible investment for shareholders in the last two, three years, and lots of investors probably wouldn't want to touch GE with a ten-foot pole. That said, though, management is laser-focused on improving cash flow and capital efficiency, and earnings expectations are so low that it won't take much for General Electric to surprise to the upside in 2019 and beyond. General Electric's shares are still quite cheap, and have the potential to outperform its industrial peers as the restructuring gains steam. I am looking to double my money with GE over the course of the next one to three years.

It's a bold statement, but the truth of the matter is that money is often made with investments that don't look too good on first glance. And I think we all agree that General Electric fits this bill:

It is hard to make an investment case for a company like this, isn't it?

Not really. General Electric is taking massive action to correct course and reposition the industrial company around its core businesses aviation, power and renewables, and while it may take some time to steer a containership into a new direction, management is doing all the right things that should yield positive results for shareholders over time.

Most importantly, the monetization of GE's healthcare business and the divestment of the company's Baker Hughes stake could not only lead to a significant cash influx for General Electric in 2019/20, but improved capital efficiency could be a positive catalyst for General Electric's beaten down stock.

General Electric can be expected to be quite active in the capital markets this year.

GE's Outlook Could Be A Positive Catalyst For The Stock

So far, General Electric has guided for a low to mid single-digit increase in organic revenues and an improvement in free cash flow in 2020/21 as the company completes its power restructuring. 2019, however, will likely be defined by continued weakness in its power business. If General Electric's guidance next week surprises to the upside, more investors are likely going to move back into the stock.

Can You Double Your Money With General Electric?

One probably can. The question is how long it will take.

Earning high risk-adjusted returns with turnaround stocks is nothing uncommon though. Just look at General Electric.

If you bought General Electric's shares at the point of maximum pessimism in 2018 (when shares dropped as low as $6.66), you would already be up considerably on your investment. Since shares today sell for $9.45, investors that managed to gobble up shares near the bottom are looking at an unrealized capital return of ~42 percent. That's not a bad return for a holding period of just a couple of months. 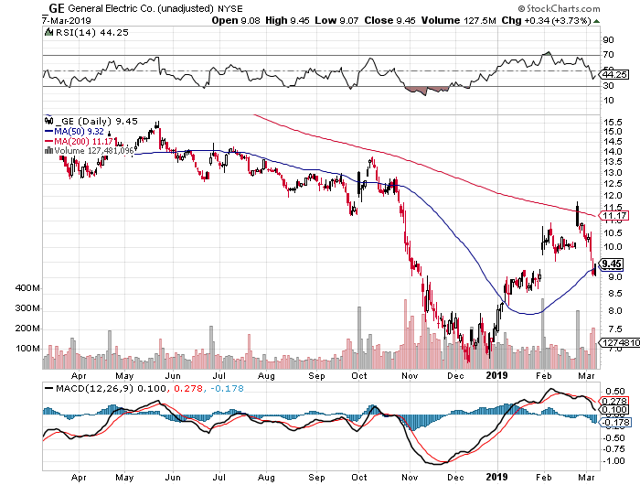 If General Electric manages to turn around its industrial free cash flow and improves margins in 2019, a major reassessment of GE's stock is likely going to take place that could drive the share price much higher. Hence, investors with a high risk tolerance that buy into General Electric as long as the industrial company remains out-of-favor could potentially earn high risk-adjusted returns here, in my opinion.

Going forward, I expect management to report more good news than bad news as the company's restructuring gains steam and the power business is slowly but gradually returned to profitability.

Importantly, General Electric could use money from the monetization of its healthcare business to make growth investments in its core businesses which in turn could drive a multiple re-rating for General Electric's shares. Investor sentiment is already improving (clearly reflected in a higher share price), and institutional investors are backing GE's turnaround plan and have made bullish bets on GE stock.

Based on its forward-P/E-ratio, General Electric has huge upside and potential to catch up to its industrial peers in the sector. GE's earnings multiple could almost double and GE would still not be overvalued, relative to its peers. 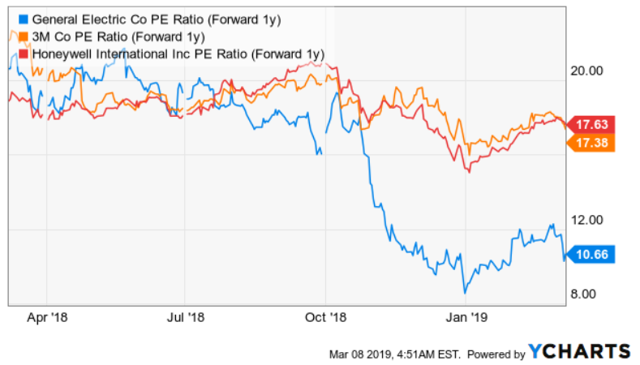 For one thing, a recession could derail the investment thesis. A major earnings and cash flow decline (in addition to the one that has already happened) on the back of a cyclical downmarket would likely erode investor trust in management's ability to turn things around and likely trigger a deterioration of investor sentiment. A failed turnaround in the power business also poses a considerable risk factor that investors need to account for.

General Electric remains a high-potential stock for investors with an above-average risk tolerance. GE's shares have already bounced back more than 40 percent from their most recent low, and the industrial company retains upside on the back of successful capital measures, improving cash flow and capital efficiency, and growth investments. The upcoming guidance could also be a positive catalyst for GE's stock. The company further has institutional support and should have the worst behind it. Shares are moderately valued, and have an attractive risk/reward. Speculative Buy.