General Electric: Much Ado About Nothing

Last week, General Electric (GE) CEO Larry Culp presented GE's 2019 outlook to analysts and investors. I expected fireworks after the event. I also suspected Culp would speak to the company's recent shelf registration and a potential capital raise. However, there was more "happy talk" from Culp on what could potentially happen in the future. The stock is flat since the meeting. Overall, it was a more happy talk from Culp, but nothing earth-shattering.

Cash Burn Could Be $2 Billion

Management divulged industrial free cash flow ("FCF") for full-year 2019 could be anywhere from $0 to -$2 billion. GE has been hiving off assets for nearly two years now, which has energized bulls. However, the company's underlying businesses still appear to be in disarray. FCF is a major metric in determining a company's health. 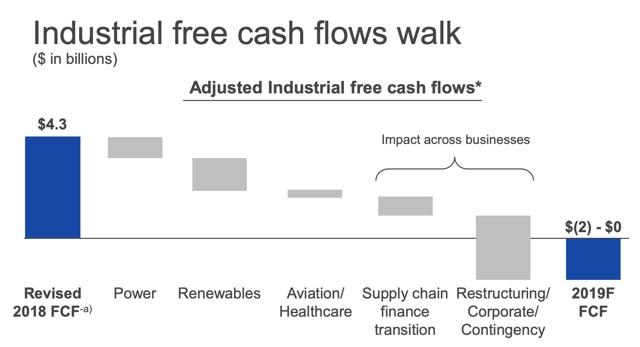 Fitch recently revised GE's credit to Negative from Stable, citing concerns over FCF. Culp's recent announcement that cash burn could be in the billions will likely not strengthen the company's case with the rating agencies. FCF has been a problem ever since John Flannery was CEO. Combined with its high debt load, GE's uneven cash flow has been a concern. In 2018, free cash flow was $4.5 billion; Power dragged down full-year FCF by about $2.7 billion. If the rating agencies decide to downgrade the debt again, then sagging FCF could be a rationale.

NewCo Is Still In Disarray

Despite asset sales and changes in strategy, GE's core businesses remain in disarray. In Q4 2018, revenue growth from core operations ("NewCo") - Power, Renewable Energy, and Aviation - was flat Y/Y. However, operating profit fell by double digits. NewCo's dismal performance gives the impression that GE is selling its most-attractive assets. The assets left behind could be the dregs of the business.

NewCo's 2019 outlook is not very encouraging. Management forecasts revenue for Power (36% of total revenue) will be down by high single digits. A healthy contractual services book could be offset by challenges in Grid and Power Conversion. Revenue from Renewables is forecast to be up by double-digits as Renewable Energy continues to disrupt the traditional Power segment. Revenue from Aviation is forecast to be up by high double digits; the segment is expected to capitalize on military and next-generation applications.

Management explained several efforts to deleverage the balance sheet, ranging from sales of Biopharma, Transportation, and a major stake in Baker Hughes (BHGE). At Q4 2018, GE's total debt load was $110 billion, down from about $115 billion at Q3 2018. Proceeds from the Biopharma sale could bring in $20 billion and help the company reduce debt even further. Management claims its industrial net debt at year end was $55 billion and its target debt/EBITDA is less than 2.5x. It also wants to reduce GE Capital's ("GECC") debt/equity to less than 4x.

Bifurcating GE's credit metrics between industrial debt and debt at GECC seems opaque. That logic may have worked a few years ago when (1) GE's core businesses were not in disarray and (2) GECC did not have the potential to be a black hole. Given the consistent losses at GECC, I believe its total debt should be measured against its total EBITDA. I previously estimated GE's total debt to EBITDA was around 7x, which would be considered below investment grade. That said, GECC's equity appears highly-subjective. It is partly determined by the value the company places on PP&E, receivables, and other assets. Given GECC's consistent operating losses, how much value should investors place on GECC's assets or equity?

When Culp came aboard as CEO he talked about making GE's finances less opaque. On the 2019 earnings outlook, I expected him to walk investors through GE's debt/EBITDA, before and after asset sales. Since he did not, I would assume the worst about GE's credit metrics. Culp has had months to illustrate GE's total debt/EBITDA. The fact that this is still an open issue could imply the answer may not be favorable to GE.

GE's 2019 outlook was much ado about nothing. NewCo remains in disarray and GE's credit metrics remain opaque. Sell GE.