General Electric Co. ousted CEO John Flannery just over a year into his tenure and replaced him with a renowned turnaround expert -- a surprise move that stoked the biggest rally in nine years for the company’s depressed shares.

Larry Culp, who won Wall Street’s praise for transforming manufacturer Danaher Corp., takes over immediately, GE said in a statement Monday. GE now expects to miss its 2018 earnings forecast and said it will take an impairment charge for almost all of the $23 billion of goodwill associated with its struggling power segment.

“He’s an outsider and maybe it’s going to take an outsider to come in and fix this thing,” said Scott Davis, an analyst with Melius Research who “didn’t see this coming at all.” Flannery “seemed like he was on the right path, but he was slow.”

The stunning shakeup underscores the urgency at GE, which has lost half a trillion dollars in market value since the peak in 2000. The problems deepened in the past two years as GE faced cash-flow shortfalls, slumping demand and investigations by the U.S. Securities and Exchange Commission.

The shares surged 13 percent to $12.85 at 9:36 a.m. in New York after advancing as much as 16 percent for the biggest intraday gain since March 2009. The rally had GE flirting with the highest level in almost two months after it fell 35 percent this year through Sept. 28. The company tumbled 45 percent in 2017 and was expelled in June of this year from the Dow Jones Industrial Average.

GE declined further comment and had no conference call planned.

Flannery had taken a series of steps to try to stop the bleeding, including cost cuts and significant portfolio changes. He had already pledged to sell or spin off longtime GE businesses including transportation, health care and lighting while narrowing the remaining company’s focus on power generation, aviation and renewable energy.

Culp, 55, who joined the board in April, becomes the first outsider named as GE’s CEO in the company’s 126-year history, highlighting the monumental changes afoot at the beleaguered manufacturer. Thomas Horton, the former CEO of American Airlines who also joined GE’s board this year, was named lead director. 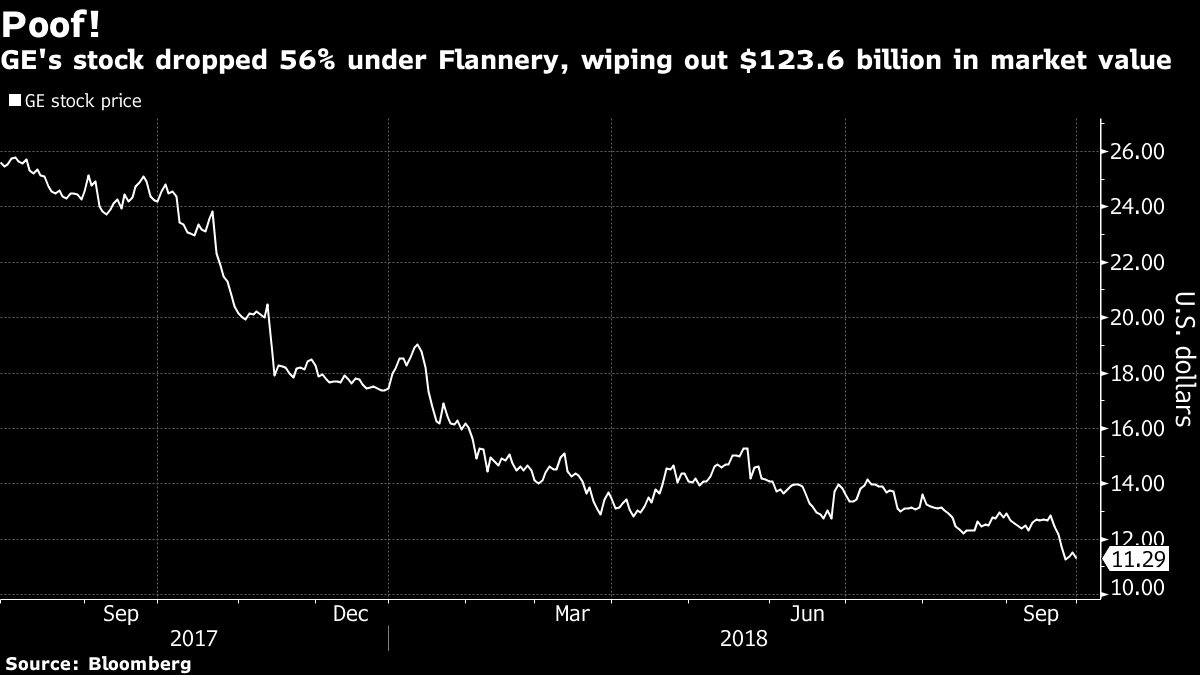 “We will be working very hard in the coming weeks to drive superior execution, and we will move with urgency,’’ Culp said in the statement.

Culp’s time as CEO of Danaher was marked by expanding the reach of the company into fields as diverse as dental imaging and water filtration. More than 90 percent of the transactions Culp oversaw at Danaher were company takeovers, according to data compiled by Bloomberg.

Deal volume topped $22 billion during Culp’s 14 years at the head of the company, with his biggest move being the 2011 acquisition of diagnostic-equipment maker Beckman Coulter Inc. for $6.8 billion.

The impairment charge is the latest setback for the struggling power unit, which has grappled with falling demand for gas turbines, declining market share and, recently, technical issues. GE disclosed last month that its flagship turbine is facing an “oxidation issue’’ that forced a customer to temporarily shut down two U.S. power plants. That prompted the biggest weekly decline since March.

Analysts have been bracing for a writedown after Flannery acknowledged that the power assets acquired from Alstom SA in 2015 weren’t performing up to expectations. Former CEO Jeffrey Immelt pushed through the $10 billion deal just as the market started to turn.