Market volatility is up in recent sessions, and END_OF_DOCUMENT_TOKEN_TO_BE_REPLACED

As tech takes a tumble this week, there END_OF_DOCUMENT_TOKEN_TO_BE_REPLACED

Gains In China Have These 3 Stocks Soaring To New Highs

China is in the headlines seemingly every day with trade wars, Trump, or something else rocking markets. A lot of this is noise, little of it is meaningful. The never-ending cycle of trade talks improving only to breakdown again seemingly has no end. That shouldn't stop investors from taking advantage of companies executing in China though. Here are three stocks making headlines for the right reasons. These stocks are strong performers in China today despite tariffs and trade wars.

Xpel Inc (XPEL) was the company I first wrote about on Seeking Alpha. I placed a price target of $10.94 per share on the company when I published that article. At the time, the company's stock had fallen from around $7.00 to under $5.00 after they posted a 40% revenue decline in China in Q1. The company makes, sells, and installs paint protection film, window film, headlight film, and several other aftermarket automobile products. The company also has recently ventured into the architectural building window film market. 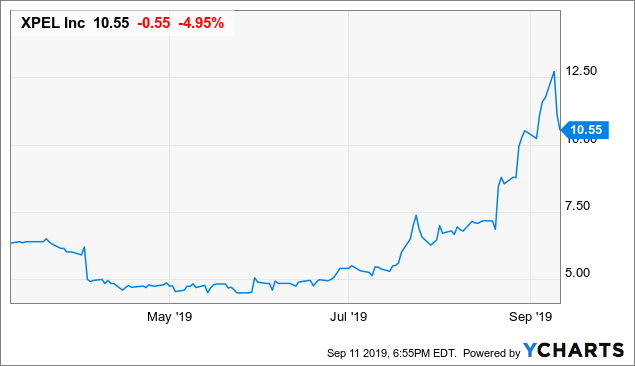 The weakness in Q1 in China for Xpel was due to two main factors. First, there was a build-up of inventory in the country from the previous year. Second, increased competition had an effect on Xpel's sales in China. I thought, however, that the company would be able to recover by the year's end as inventory works its way through the system and Xpel's brand and superior quality would ultimately hold up long term. I did a DCF analysis and saw the stock was likely trading at a price that left more than 100% potential upside with conservative estimates.

Update 09/18/2019 11:27 AM: The 20% growth rate refers to total revenue growth; this has been corrected from an earlier version that indicated China revenue.

Since the company reported 1st quarter 2019 results, the stock uplisted from the OTC markets to the NASDAQ and reported 2nd quarter 2019 results. I had figured it was only a matter of time before China recovered. It looks like China is returning to positive momentum, although will likely still be down year over year in Q3. In the 2nd quarter call management said they now expect total revenue in Q3 to increase by around 20%. The stock rallied immediately after earnings and recently hit an all-time high of $13.20. A 166% increase since I wrote that article in June 2019.

Xpel has been my largest position by far from under $5.00 per share, and I still haven't sold a single share. In fact, I've bought more. This is a fantastic company. The potential is massive, even after the stock has more than doubled. I am holding this one for the long term. 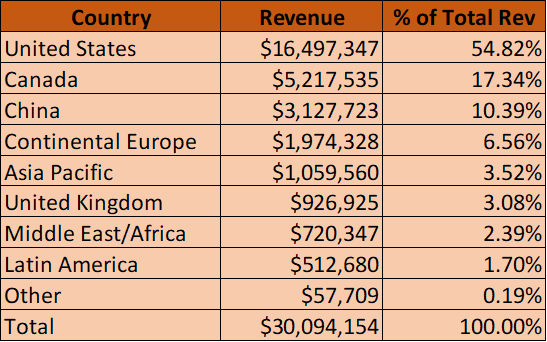 As for China going forward, China still makes up a relatively small portion of the company's revenue. In Q2, China accounted for just 10.4% of total revenue. Compared to Canada and the United States, China remains severely under-penetrated relative to their population. To give you an idea of how fast the company is growing elsewhere, here are the growth rates year over year in Q2 from some other regions. Canada - 18%, Unites States - 56%, Asia Pacific - 50%, Continental Europe - 14%, United Kingdom - 14%. China represents a huge market for Xpel that remains its largest opportunity. Xpel's management has learned how to handle inventory going forward in the country, and I think sales there will be able to sustain mid-double-digit growth for many years yet. Xpel is a great company benefiting not only from the beginning of a recovery in their China business but also a return to growth overall.

Costco (COST) is a discount retailer that sells large volumes of discounted merchandise. The company requires a paid subscription to shop there. This helps them offer the lowest prices on all the goods they sell. This is one of my favorite companies in the entire world. They have an incredibly strong moat as they're the largest warehouse membership retailer. This allows them to negotiate better prices than almost anyone else on goods that they can then turn around and sell to consumers for almost no markup. It is a genius business model that makes it incredibly difficult to compete on price with. 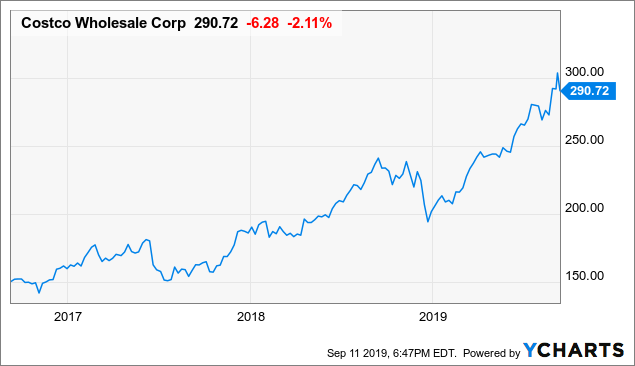 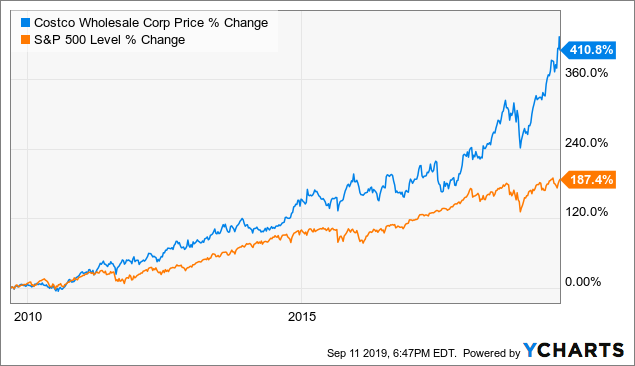 The company has outperformed the market and done very well for shareholders over the last decade. It's done even better if you bought the stock several decades ago.

But concerns about growth have some investors claiming the stock is overpriced. At a forward P/E of 34, it certainly appears expensive. 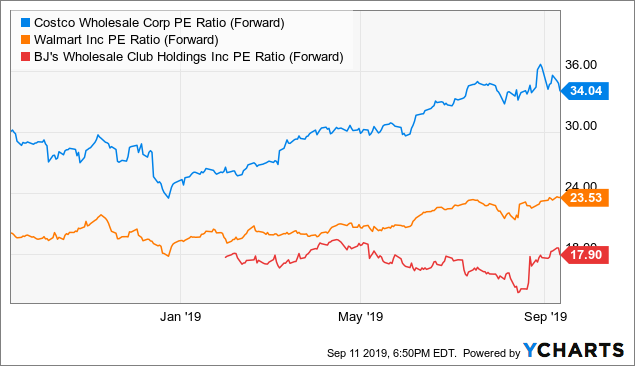 The company opened their first store in China recently. Lines were so long and the store was so packed they had to shut down on day 1. This added fuel to their stock price, which was already doing well, sending it above $300 per share.

In my last article on Costco, I made two arguments somewhat in favor of the bulls. First, Costco shouldn't be priced like other retail stocks, and second, the company still has quite a bit of growth left. The company, I argued, should be priced more like a bond than a stock, as they're so consistent in delivering revenue and profits to shareholders. I left that article with a final verdict of neutral on the stock, but recent developments have made me realize that my growth projections were likely too low. I am now bullish on the company. 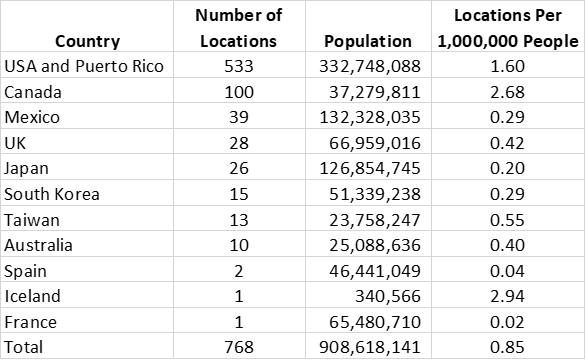 Clearly, China is potentially huge for Costco. If the United States can support more than 500 stores, then what can a country with more than 4 times as many people support? Certainly hundreds, possibly thousands. Additionally, Chinese consumers may appreciate lower retail prices more than people in the US, as GDP per capita is lower. China is a growth prospect for Costco that is simply astonishing. It has the potential to double the number of Costco stores in existence. As long as Costco can maintain and grow its China presence, the company is in for continued success.

The retail world has, for the most part, struggled in 2019. Sales continue to shift online, and old traditional retailers can't keep up. Lululemon is one of the exceptions (though I'd hardly call it old and traditional). The company is posting strong growth across the board, in many regions, through multiple channels (both in retail stores and online). In Q2 2019 the company declared 17% growth in comparable sales year over year on a constant currency basis. Their highest growth region? China. In the Q2 2019 conference call, CEO Calvin McDonald revealed China revenue grew by 68% compared to the same quarter last year. He also said the company is on track to open 15 new stores in China in 2019. At the end of 2018 Lululemon had 15 stores in China. By the end of 2019, they should have close to 30. 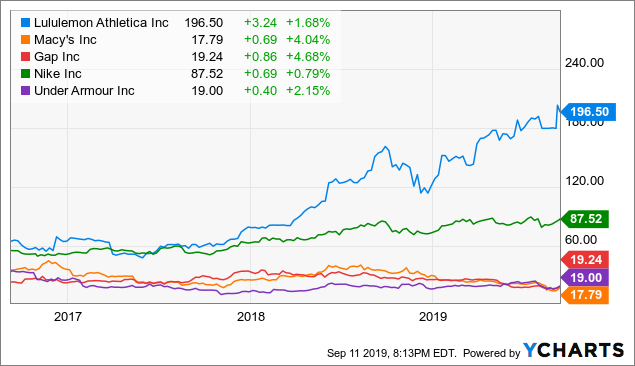 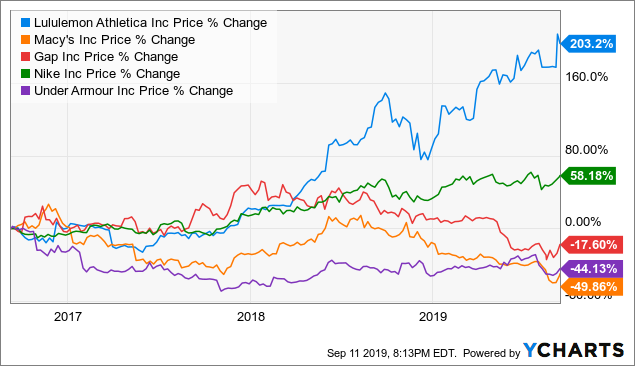 Lululemon's strong growth has been ongoing for multiple years now. The stock continues to move higher every quarter as the company has beat expectations 10 quarters in a row on both the top and bottom lines.

The story here is similar to Costco. Lululemon has caught on with Chinese consumers, and when compared to the company's US store numbers, there is still tons of room for growth in China. In Lululemon's most recent 10-k, they listed 285 stores in the United States. With just 30 by the end of this year in China, potential for hundreds more remains.

Furthermore, compared to Under Armour (UA) or Nike (NKE), Lululemon still has room to grow in the sportswear market overall. Nike will likely bring in $42B in total revenue in 2019 while Under Armour should bring in well over $5B. Lululemon estimates are currently projecting $3.97B in revenue in fiscal 2019.

Investors are often best served by ignoring the noise and buying and holding great companies. When it comes to China, there's a new headline every day. Sometimes bad, sometimes good. Ignoring the noise and looking into companies actually executing and producing real results in China is the best way to go for investors. These three companies, Xpel, Costco, and Lululemon are doing exactly that.