The buzz is largely gone. And today’s situation END_OF_DOCUMENT_TOKEN_TO_BE_REPLACED

Psychedelics could be a game-changer for millions struggling END_OF_DOCUMENT_TOKEN_TO_BE_REPLACED

First a Buying and Then a Selling Opportunity

The sky didn’t fall. Risk assets enjoyed a slight rebound Tuesday after the big selloff sparked by the U.S.’s decision to impose additional tariffs on China and that country’s decision to respond in kind. The relief rally can be justified by the likely absence of pressing reasons to sell for the next few weeks. The current target appears to be for the U.S. and China to strike some kind of deal at the Group of 20 summit in Osaka late next month. That gives time for both sides to try to find a way to avoid any further escalation. Meanwhile, the tariffs announced in the last few days will not take effect until the end of this month.

So the likelihood of major outbreak in the trade war in the immediate future is low. That, at least, is the reasoning behind those doing the buying. The case for a bounce is reinforced by the fact that markets already looked oversold before the latest events. Longview Economics in London published the following chart Friday morning. The dotted line is the S&P 500 and the red line is the firm’s indicator of risk sentiment. 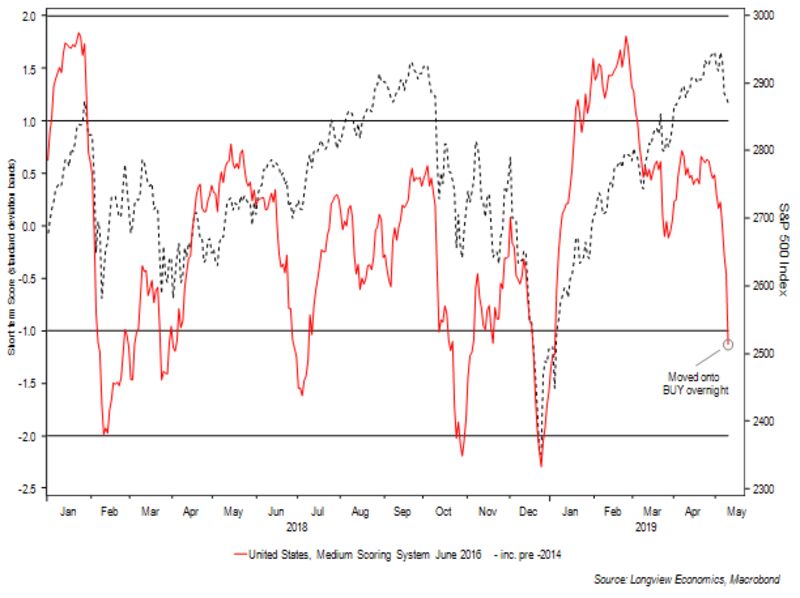 It may seem surprising that a risk sentiment indicator was already suggesting a contrarian buying opportunity as early as Friday, but Longview’s Chris Watling points out that it takes data from a number of asset classes. U.S. equities, as is often the case, were the last asset class to get the message that there was reason to be nervous:

[T]his week’s price action and the trade war associated weakness in global risk assets has pushed a number of our medium term market timing models back onto BUY. Those models had already been rolling over since early/mid-April, as many risk assets have been performing poorly since that time (e.g. Chinese equities down 12% since April 11th, oil down 6% since April 24th & various base metals which have been performing poorly in recent weeks). This week’s weakness, therefore, served as the last piece of the puzzle to complete that move back onto BUY.

A “buy-the-dips” rally that is overtaken by a likely new selling opportunity as Osaka approaches is the best bet, Watling suggests.

All of this is, to be clear, for the very short term. For the longer term, the problem is that neither Osaka nor any other summit for years to come will resolve China’s trading relationship with the rest of the world definitively. Many think of this dispute as having a binary outcome, but this may stem from force of habit. As Sarah Ponczek pointed out for Bloomberg News, traders are accustomed to analyzing Brexit, which does have a binary outcome. The future for China is far more fluid.

And it also matters more. Following a discussion in the comments thread to Monday’s newsletter, I looked up China’s share of global GDP. It had doubled in the eight years before acceding to the World Trade Organization in 2001. It has since almost quadrupled. This means great economic power. The terms on which China trades with the rest of the world are crucial: 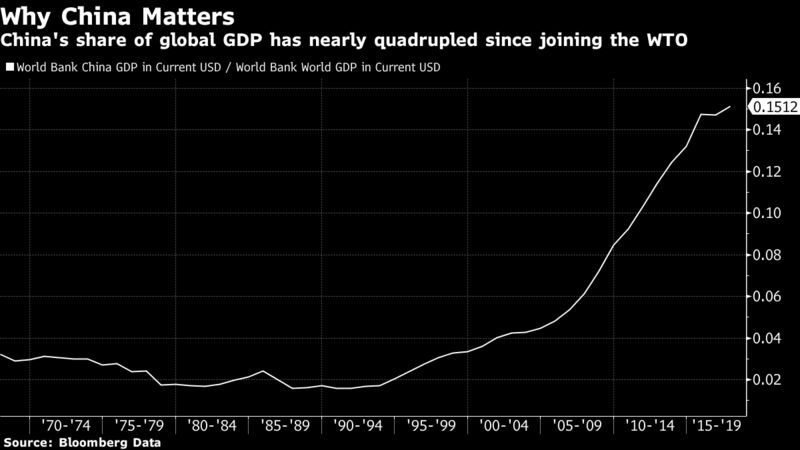 Many have long accused China of currency manipulation to keep the yuan artificially weak. This chart shows China’s real effective exchange rate (after taking account of differences in inflation) with its international trading partners, as calculated by JPMorgan. Increases mean that the currency is growing less competitive. The case that China was benefiting from an artificially cheap currency during its explosive growth in the first decade of this century is hard to dispute: 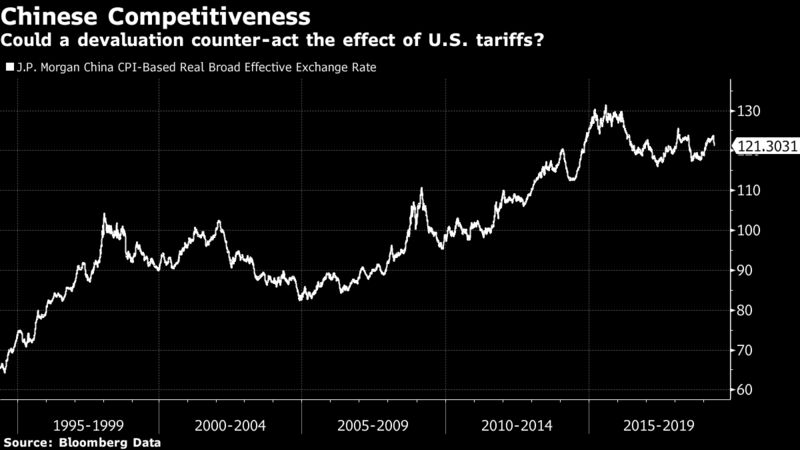 But the era of manipulation to keep the currency weak appears to be over. If anything, the authorities are now intervening to keep it from depreciating. Meanwhile, their attempts at a steady but slow liberalization of the currency, while still maintaining ultimate control, are being tested by the market. This is crucial because a sharp devaluation, which is quite conceivable, would automatically cancel out any trade advantage that the U.S. might gain from tariffs. And as currency moves have been used by the Chinese authorities to send signals in the past, there is the risk that a concession to market forces could be mistaken as a hostile signal. As it stands, the moves in the Chinese currency against the dollar in recent days are plainly unfriendly: 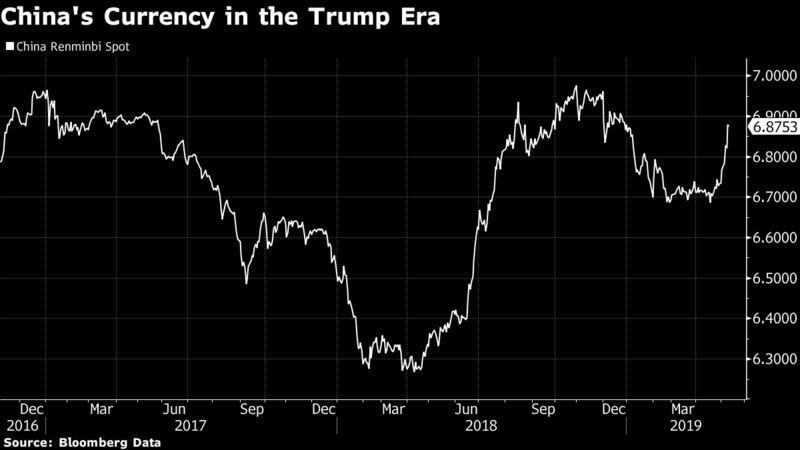 George Magnus, the former long-time foreign-exchange strategist who is now an associate at Oxford University’s China Centre, put the problem to me this way:

The currency is an additional vulnerability in an already tense situation. When the Yuan traded up to 6.70 [per U.S. dollar] it looks as though that was the People’s Bank of China at work, supporting or gently nudging it higher at a time when it looked like the trade talks were going well. But it now looks like the PBoC has let it go all the way back. I think the Yuan just wants to go down.

The problems include the removal of some companies from supply chains in China as they re-evaluate their business on the assumption of greater trade hostility, with beneficiaries possibly including other countries in Asia or Mexico. Capital flight is a problem. And there is also the issue of China’s over-extended credit. “At some point over the medium term,” says Magnus, “if domestic credit keeps growing then the fundamentals of that pegged currency will become unsustainable.” The question is not whether there is a further carefully signaled devaluation, but rather an uncontrolled break of the peg, followed by a very substantial devaluation. Neither China nor the U.S. wants this to happen, but it could yet upend their delicate trade negotiations.

Globalization And Its Discontents.

The companies of the S&P 500 avoided a serious drop in earnings during the first quarter. According to FactSet, earnings per share declined by only 0.5 percent. But this concealed a startling divergence between the fortunes of companies that made most of their sales in the U.S. and multinationals who took more than half of their revenue from outside the U.S.

For multinationals, as FactSet’s chart shows, earnings were down 12 percent from a year earlier, on the back of sales that grew by only 0.2 percent. In both respects, these numbers were far inferior to domestically focused companies: 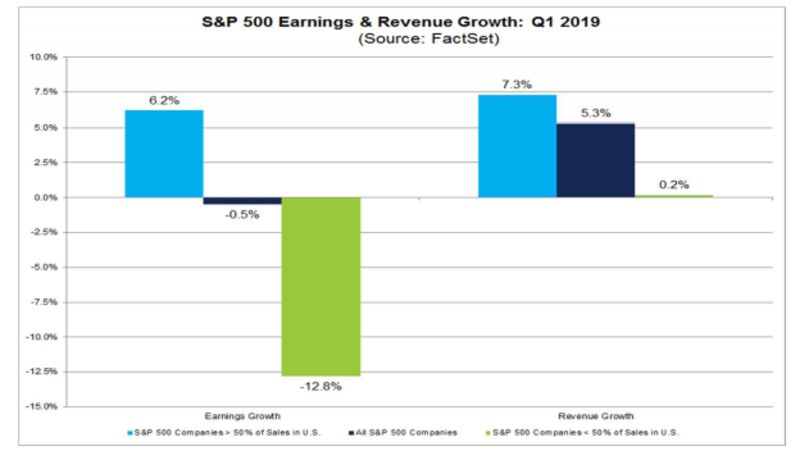 What is going on? The strong dollar must bear most of the blame. On average, Bloomberg’s trade-weighted dollar index was 5.4 percent stronger during the first quarter of this year than it was in the same period of 2018, which automatically makes life harder for U.S. exporters hoping to show impressive profits. Beyond that, trade tensions and slow economic growth are not helping Corporate America, or the shares of companies quoted in the U.S.

Let us assume that the ongoing result of the current trade tension is a more protectionist world in which it is harder for companies to use stretched out supply chains, sourcing different components and parts of production from different parts of the world. If trade slows and supply chains are disrupted, who stands to suffer the most, and who can survive unscathed?

This fascinating chart compiled by Luca Paolini at Pictet Asset Management has a few surprises. Singapore, the ultimate trading nation, looks most exposed, followed by a number of former communist nations in Eastern Europe, which have developed into suppliers for the industrial powerhouses of the EU, and by “tiger” economies such as Taiwan, Malaysia and Vietnam  that are reliant on the halo around China. Argentina and New Zealand, both geographically remote, unsurprisingly stand to survive relatively unscathed in a world of greater trade barriers. What is more interesting is that the U.S. is the next least intricately involved in global supply chains, while a number of the biggest emerging markets are also relatively lightly integrated into the rest of the world: 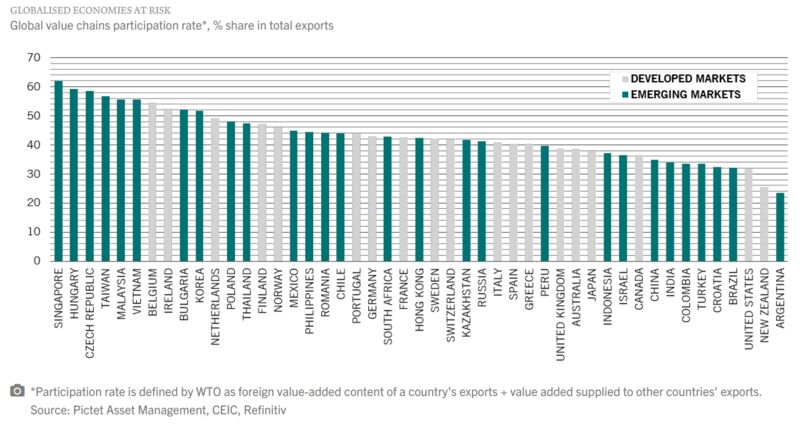 Paolini’s calculations suggest that everyone would lose from a trade war. Here is the math:

Our calculations show a full-scale trade war between the US and China has the potential to tip the global economy into a recession and lead to a sharp decline in world stocks. Our model shows that if a 10 per cent tariff on US trade were fully passed onto the consumer, global inflation would rise by about 0.7 percentage points. This, in turn, could reduce corporate earnings by 2.5 per cent and cut global stocks’ price-to-earnings ratios by up to 15 per cent.
All of which means global equities could fall by some 15 to 20 per cent. This in effect would turn the clock back on the world stock market by three years. US bond yields may fall, but the scale of decline will be limited due to an inflationary impact from tariffs.

Note that as U.S. companies are more expensive than their counterparts elsewhere, and are heavily exposed to the rest of the world, the U.S. stock market could still expect to be badly affected. If you want a precedent for this rather gloomy analysis, Paolini suggests going back to Richard Nixon:

The picture that emerges from our analysis is similar to what investors have previously experienced. The history of financial markets shows that the erection of trade barriers is bad for equity markets: the S&P 500 fell 10 per cent in the three months after US President Richard Nixon imposed a 10 per cent tariff on imports in mid-1971.