Stocks tanked on Monday after more cases of the coronavirus were confirmed over the weekend, ratcheting up worries over the virus’ impact on the world economy.

There are 2,862 confirmed cases so far in China and the death toll in China has risen to 81. The World Health Organization’s director general is traveling to China to meet with government and health officials. In the U.S., a fifth case of coronavirus was confirmed over the weekend.

“China is the biggest driver of global growth so this couldn’t have started in a worse place,” said Alec Young, managing director of global markets research at FTSE Russell. “Markets hate uncertainty, and the coronavirus is the ultimate uncertainty in that no one knows how badly it will impact the global economy.” 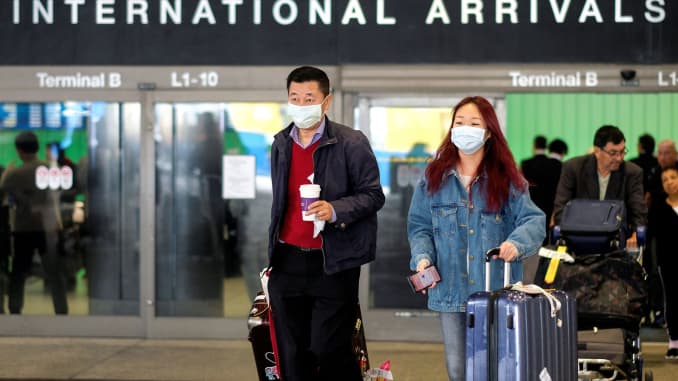 Travel stocks Expedia, Carnival and Marriott International all pulled back at least 2.1%. Consumer shares with exposure to China such as Apple, Disney, Nike and Estee Lauder all dropped at least 1.8%.

Caterpillar, a bellwether for global growth, fell 3.3% while the VanEck Vectors Semiconductor ETF (SMH) dropped 4%. Nvidia and Micron Technology fell more than 4% each while AMD dropped 2.2%.

Overseas, global stocks took a hit, as the Japanese Nikkei 225 dropped 2% while the German Dax lost 2.6%. France’s CAC 40 also pulled back more than 2%. The Stoxx 600 index — which tracks a broad swath of European equities — tanked by 2.3%. The iShares MSCI Emerging Markets ETF (EEM) dropped 3.5%. Chinese markets were closed due to the Lunar New Year holiday.

“The market had run up a lot on the belief that economic data would improve post the trade war,” said Brent Schutte, chief investment strategist for Northwestern Mutual Wealth Management. “This, to me, could potentially push out the time for that data to improve.”

Traditional safe havens such as Treasurys and gold got a lift as worries over the sickness permeated. The 10-year U.S. Treasury yield fell to 1.61% and hit its lowest level since October while gold futures climbed about 0.6%.

The Cboe Volatility Index (VIX), widely considered to be the best fear gauge on Wall Street — jumped to around 18.2 from about 14.5.

Coronavirus fears have been rattling investors since last week. Stocks closed lower on Friday, marking their first weekly decline of the young year.

“Investors tapped the brakes last week as overbought conditions and concerns over the coronavirus created a few speed bumps on the path to record-highs,” said Craig Johnson, chief market technician at Piper Sandler. “We continue to believe there is an elevated risk for a deeper pullback to develop.”

Elsewhere, American Express shares fell 3.1% after an analyst at Stephens downgraded them to equal weight from overweight. The analyst also trimmed his price target on the stock, citing a stretched valuation.