Delta 9 Cannabis (TSE:DN) Takes On Some Risk With Its Use Of Debt

Legendary fund manager Li Lu (who Charlie Munger backed) once said, ‘The biggest investment risk is not the volatility of prices, but whether you will suffer a permanent loss of capital.’ When we think about how risky a company is, we always like to look at its use of debt, since debt overload can lead to ruin. As with many other companies Delta 9 Cannabis Inc. (TSE:DN) makes use of debt. But the more important question is: how much risk is that debt creating?

What Risk Does Debt Bring?

Debt assists a business until the business has trouble paying it off, either with new capital or with free cash flow. Part and parcel of capitalism is the process of ‘creative destruction’ where failed businesses are mercilessly liquidated by their bankers. However, a more common (but still painful) scenario is that it has to raise new equity capital at a low price, thus permanently diluting shareholders. Of course, the upside of debt is that it often represents cheap capital, especially when it replaces dilution in a company with the ability to reinvest at high rates of return. The first step when considering a company’s debt levels is to consider its cash and debt together.

What Is Delta 9 Cannabis’s Debt?

You can click the graphic below for the historical numbers, but it shows that as of March 2020 Delta 9 Cannabis had CA$22.3m of debt, an increase on CA$7.49m, over one year. However, it does have CA$6.32m in cash offsetting this, leading to net debt of about CA$16.0m. 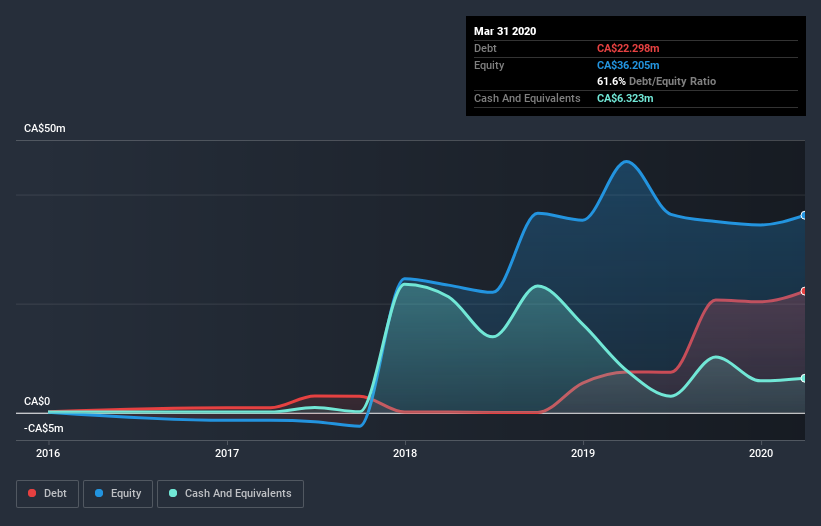 While this might seem like a lot, it is not so bad since Delta 9 Cannabis has a market capitalization of CA$51.7m, and so it could probably strengthen its balance sheet by raising capital if it needed to. But it’s clear that we should definitely closely examine whether it can manage its debt without dilution.

We use two main ratios to inform us about debt levels relative to earnings. The first is net debt divided by earnings before interest, tax, depreciation, and amortization (EBITDA), while the second is how many times its earnings before interest and tax (EBIT) covers its interest expense (or its interest cover, for short). Thus we consider debt relative to earnings both with and without depreciation and amortization expenses.

While we wouldn’t worry about Delta 9 Cannabis’s net debt to EBITDA ratio of 3.4, we think its super-low interest cover of 0.71 times is a sign of high leverage. In large part that’s due to the company’s significant depreciation and amortisation charges, which arguably mean its EBITDA is a very generous measure of earnings, and its debt may be more of a burden than it first appears. It seems clear that the cost of borrowing money is negatively impacting returns for shareholders, of late. However, the silver lining was that Delta 9 Cannabis achieved a positive EBIT of CA$1.6m in the last twelve months, an improvement on the prior year’s loss. There’s no doubt that we learn most about debt from the balance sheet. But ultimately the future profitability of the business will decide if Delta 9 Cannabis can strengthen its balance sheet over time.

Finally, a business needs free cash flow to pay off debt; accounting profits just don’t cut it. So it’s worth checking how much of the earnings before interest and tax (EBIT) is backed by free cash flow. During the last year, Delta 9 Cannabis burned a lot of cash. While investors are no doubt expecting a reversal of that situation in due course, it clearly does mean its use of debt is more risky.