Cameco Could Be One Of Best Stocks To Own This Decade

I started buying uranium mining stocks in 2017 after I predicted that the uranium spot price would bottom at the end of 2016. While my call for the uranium price bottom in late 2016 turned out to be correct, uranium prices mostly traded sideways for the rest of the last decade. One of the two stocks I invested in as a way to play the uranium turnaround story was Cameco (CCJ). I should note that Cameco is my main bet, with my other investment UR-Energy (URG) only making up about a third of my original financial allocation for my overall uranium play. Neither stock did spectacularly well, with my uranium investments being flat so far since 2017. But I do believe that Cameco in particular is set to have a very strong decade ahead. The uranium fundamentals combined with the company's specific prospects make it potentially one of the best long-term investments for this decade, not just within the uranium sector but within the overall mining industry.

Uranium supply/demand should tighten, with demand being pushed higher by need for low emissions electricity.

All over the world there's an effort to reduce or at least help limit global emissions growth in order to fight the perceived threat from climate change. Natural gas is enjoying a demand boom as a result, given that it's the cleanest burning fossil fuel, while there's very little economic disruption associated with switching from coal to gas. Low natural gas prices helped to make the change relatively painless. There are limits however to just how much conversion from coal to gas the world can achieve, given that it's a finite resource with conventional natural gas production far outpacing new discoveries in the past few decades. Shale gas production has its limits as well, with much of the shale industry suffering financial losses in the past decade. Nuclear power will therefore be the best choice going forward for economies looking to expand or at the very least maintain current electricity generation levels, while also achieving emissions reductions meant to at the very least make it seem like they are doing something about climate change.

The idealistic view has been that renewable sources of electricity such as wind and solar will replace most fossil fuel use as well as nuclear power generation. Some countries like Germany will continue to pretend for a little while that this can be achieved, which is why it's committing to phasing out its nuclear power generation capacity even as it pledges to cut emissions. But even in Germany reality is starting to hit home as wind power generation growth is starting to stall out. Domestic opposition to wind turbines is often cited as being a major culprit, but in truth Germany has reached its maximum potential wind and solar electricity generation mix due to a lack of storage capacity, which is needed given the very unreliable nature of wind and solar power generation, which depends on weather patterns. Current electricity storage solutions are not economical, therefore not ready to be mass implemented. 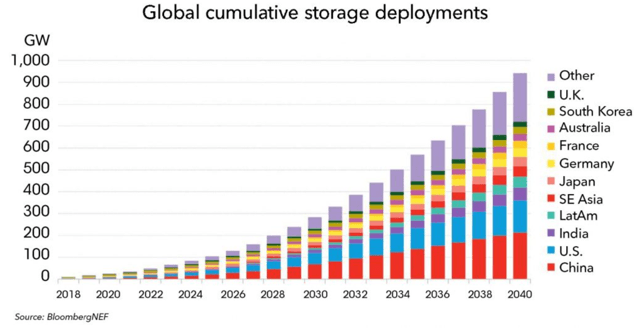 While the increase in electricity storage capacity worldwide is impressive, it only looks so because of the low starting base. Based on the forecast above, there will be 900 GW storage capacity by 2040, which will be less than adequate in meeting the needs of the world's growing electricity demand with only renewable energy. By a recent estimate, the US East Coast alone would need about 279 GW of storage capacity in order to run only on wind and solar. Based on most current estimates current electricity storage costs are far too high to be economical, which makes even the chart above overly optimistic. In the absence of economically-viable mass storage of electricity, the only way for the global economy to reduce emissions while maintaining a healthy pace of economic growth is to adopt more nuclear energy, which is what I believe the inevitable conclusion will be within a few years.

The global uranium supply/demand picture looks increasingly tight and it's mostly due to demand growing in the developing world, but it could see a significant boost in Europe as well, as I already pointed out. In fact, I think the level of demand may be far underestimated for the longer term, given that renewable energy supply growth may end up disappointing worldwide. 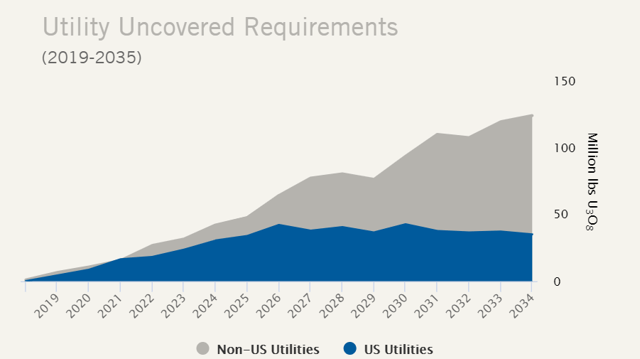 The chart above tells us that there's a lot of expected demand in the next 15 years that utilities have not contracted for yet. If I'm correct about renewable sources disappointing due to lack of electricity storage, it's quite likely that the gap may be even larger.

Even though uranium did not perform spectacularly since the spot price bottomed back in late 2016, I continue to hold on to my uranium investments because at some point this decade I think the uranium market will break much higher. The timing of it is hard to predict, which is why I don't want to risk selling and then trying to time the market.

If one has to wait for a market event to take place in the uranium market, Cameco happens to be perhaps the best company to remain invested in, given that it remains a solid player. With 467 million pounds of proven reserves and almost as much in probable reserves, the value of its resources alone represent a solid value base which gives investors some peace of mind. In terms of the profitability of its reserves, for the first nine months of 2019 it recorded a net loss of $53 million on revenues of $988 million. For the same period of 2018, it registered a net income of $9 million on revenues of $1.26 billion. Cameco's decision to reduce production in order to adjust to shorter term market balance issues were in part responsible for the loss of revenue.

It's worth noting the fact that Cameco's debt situation has improved significantly compared with 2018.

The significant improvement in debt is important for Cameco investors because it represents an improvement in the company's resilience. When investing in any mining company, I personally tend to place a premium on resilience given the very volatile nature of the business. Resilience allows investors to ride out downturns and hold out for a recovery instead of being forced to sell into a downturn out of fear that a company will not survive the downturn. Cameco stock will not be among the top gainers when a significant rally in uranium will occur. But unlike many of its peers, the risk of being wiped out is far lower, given that most of its peers will collapse before it will, in the event that a uranium price crash will occur in the shorter term.

If the supply/demand situation were to improve significantly, Cameco would be in a good position to exploit its reserves profitably, while also raising production. Given the overall trends with regard to global energy I see no reason to expect the uranium market to remain stagnated, therefore this should be a very good decade for Cameco stock. While I recognize the fact that it takes much patience to wait for this investment to work out, I think it will be worth it.