Market volatility is up in recent sessions, and END_OF_DOCUMENT_TOKEN_TO_BE_REPLACED

As tech takes a tumble this week, there END_OF_DOCUMENT_TOKEN_TO_BE_REPLACED

Buying high-quality stocks for a discounted valuation can produce outstanding returns. However, such opportunities are hard to find, and when you find a world-class business trading at bargain prices, that is often because the company is facing some uncertainties in the short term.

In the case of Facebook (FB), the FTC investigation is clearly hurting the stock price recently. However, the most probable scenario is that regulatory pressure will have a modest impact on the company's fundamentals over the long term, and investors who are willing to purchase the stock in times of uncertainty should well be rewarded with attractive returns in the years ahead.

The Market Seems To Be Overreacting

The regulatory scrutiny on Facebook will probably have a negative impact on investor sentiment about the stock. However, chances are that the long-term impact on the business fundamentals and financial performance will remain contained.

History shows prior anti-trust investigations have taken years to play out, and the durable impact on big tech corporations has not been particularly damaging.

Microsoft (MSFT), for example, faced an antitrust lawsuit in 1998 due to the dominant position of its Windows operating system. Yet, the stock was making new historical highs at the end of 1999, in the midst of the tech bubble. While Microsoft suffered some setbacks as the company lagged the competition in key areas such as mobile and online advertising in the 2000s, Microsoft is currently the biggest company in the US market by market capitalization, and the stock is trading close to historical highs as of the time of this writing.

Another relevant example to consider is Alphabet's (GOOG, GOOGL) Google. The company reached a deal with the FTC in 2013, and it remained under investigation for more than a decade in Europe. At the end of the day, the online search giant paid some reasonably modest fines, and the business fundamentals have not been permanently damaged by regulatory oversight.

Facebook is a dominant player in online advertising - that is beyond discussion. However, market dominance on its own is not unlawful unless it is accompanied by evidence of anti-competitive behavior.

It's hard to say that Facebook is a monopoly, since most social media users have accounts across multiple social media platforms such as Facebook, Twitter (TWTR), YouTube, Pinterest (PINS), Snapchat (SNAP) and LinkedIn (MSFT), to name a few popular examples. The old monopolies of the industrial era used to have a captive customer base, but users in social media are literally one click away from one platform to the other.

It's important to note that Facebook has enormous amounts of financial resources and human talent to defend itself from regulatory pressure and comply with all kinds of requirements. However, smaller competitors and potential new entrants don't have access to the same resources, so regulators need to be careful not to put too much pressure on the sector, because this could ultimately hurt innovation and ultimately consolidate the top players in their dominant positions.

At the end of the day, the most likely scenario is that regulatory measures will be focused on reasonable goals, such as policing privacy and user content. It can take time, money and effort for Facebook to adapt to new regulations, but the company is strong enough to continue thriving under such a scenario.

In any case, regulatory risk is already incorporated into market expectations and into the stock price. If anything, the short-term uncertainty surrounding Facebook seems to be creating a buying opportunity for long-term investors in the company.

The Size Of The Opportunity

Facebook is still growing at full speed, revenue last quarter reached $15.1 billion, growing by 26% year over year and surpassing expectations of $14.976 billion. The company produced 30.7 billion in cash from operations and 15.8 billion in free cash flow over a trailing 12-months basis, so cash generation is more than healthy.

The company is launching new experiences in commerce and shopping on Instagram over the coming months, and it has successfully launched WhatsApp payments in India. Facebook is also venturing into cryptocurrencies, an area that offers intriguing potential going forward. According to some analysts, Facebook's streaming business could be worth $5 billion in the coming years. 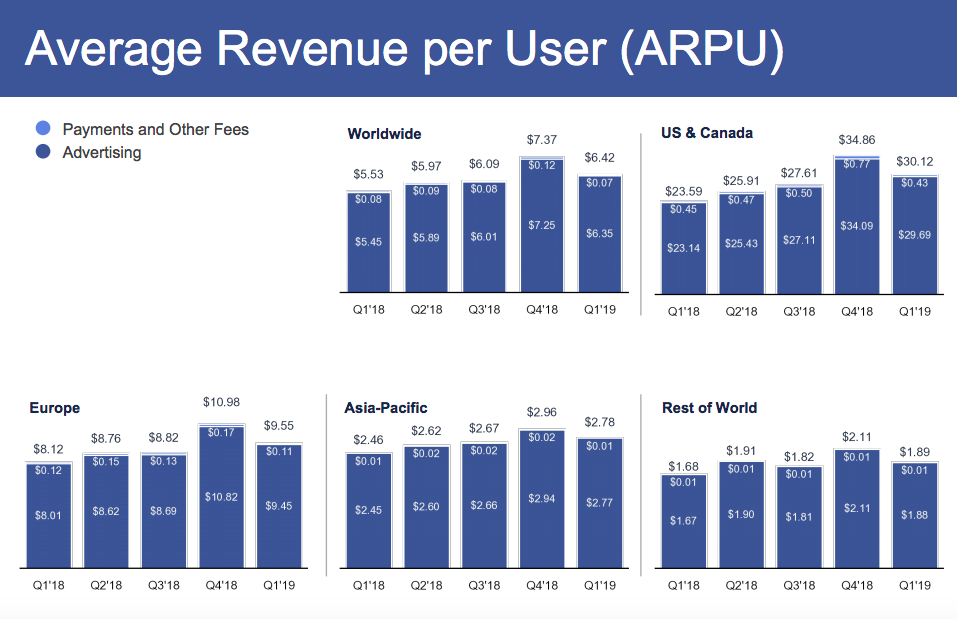 Revenue per user is only $6.42 on a worldwide scale, which means it's only 21% of what the company makes per user in the US and Canada. Facebook has abundant potential to bring monetization levels around the world more in line with those of the US and Canada, which could be a powerful growth engine for the business.

The main point is that Facebook has plenty of room for growth over the long term, and the stock price is remarkably attractive for such a high-quality business.

The discounted cash flow analysis of FB stock is based on the following assumptions:

Under these assumptions, we reach a fair value estimate of $251 per share for Facebook, which means that the stock is currently undervalued by over 38%.

Discounted cash flow projections necessarily carry a large margin of error in the assumptions and estimations. However, the main point is not reaching a precise estimate of fair value for the stock, but rather, assessing valuation in relation to the company's cash flow generation capabilities.

The key consideration is that FB stock is attractively valued, even when making conservative assumptions about free cash flow generation in the coming years.

When it comes to a big and widely followed company such as Facebook, investors need to ask themselves what kind of edge they could have in terms of evaluating the stock.

In theory, since Facebook is being closely watched by the media and by market participants, it's practically impossible to know something that other investors ignore, and there should be no edge available when investing in Facebook.

However, the main edge you can have in a position such as this one is behavioral as opposed to informational. Everyone is watching Facebook, but not everyone is focused on the same drivers and on the same time frame. Looking at the same company but seeing different things and managing the position with a longer time horizon can make all the difference in the world.

The market is really concerned about the negative news flow regarding regulatory risk and the potential impact on Facebook stock price over the coming months. From that perspective, it's really hard to know how the stock price will evolve in the short term.

However, when you look at the business fundamentals and the valuation over a long-term time frame, Facebook stock looks like a compelling opportunity at current prices.