Buy This Dip in Marijuana Stocks

Scott Gottlieb’s resignation may delay a CBD greenlight from the FDA, but it won’t stop it

FDA Commissioner Scott Gottlieb unexpectedly resigned this past Wednesday, sending marijuana stocks down across the board.

Why? What was the connection?

It involves something called “CBD” and the murky pathway toward the FDA’s approval of the compound.

In this Digest, we’ll go over the details and use Gottlieb’s resignation as a way to explore an often-misunderstood aspect of the marijuana industry.

Then, we’ll point out why any lingering weakness in quality marijuana stocks based on this news should be interpreted as a buying opportunity.

To make sure we’re all on the same page about CBD, I’m going to turn to Matt McCall. Matt is our marijuana expert, helping his Investment Opportunities subscribers navigate the complex marijuana investment industry.

CBD is shorthand for cannabidiol, which is one of more than 400 chemical compounds found in a cannabis plant. Of those 400, over 60 are unique to the cannabis plant, and they are referred to as cannabinoids.

CBD is what’s called a non-psychoactive compound found in both the cannabis and hemp plants. That’s a fancy way of saying CBD will not get you “high.”

I could write an entire book on the benefits of CBD, but I’m going to keep it simple for you. It’s actually been used by wellness and medical professionals for years as an alternative to traditional pharmaceuticals to treat everything from anxiety and depression to chronic pain to the reduction of inflammation to childhood epilepsy. If it were a drug, we would call it a wonder drug. CBD is considered one of the most beneficial compounds available to humans, and it does not have the nasty side effects that many drugs do.

For any readers who are skeptical on marijuana’s medicinal properties, a recent New York Times piece echoes Matt’s commentary:

CBD is the most promising drug that has come out for neuropsychiatric diseases in the last 50 years,” said Dr. Esther Blessing, an assistant professor at New York University School of Medicine, who is coordinating a study of CBD as a treatment for post-traumatic stress disorder and alcohol use disorder. “The reason it is so promising is that it has a unique combination of safety and effectiveness across of very broad range of conditions.”

This past December, Congress approved the 2018 Farm Bill. Part of the bill legalized hemp, which is used to make CBD.

Unfortunately, it’s not that simple.

You see, CBD can be sourced from both hemp and marijuana. And since marijuana hasn’t yet been legalized by the federal government, there’s still gray area.

Until the FDA decides that hemp CBD is safe to consume, or individual states hammer out their own laws, officials have enough reason to make life hard for establishments selling CBD-infused food, drink, and other products.

On that last point, we’ve been seeing crackdowns in recent months. Rolling Stone reports that the lack of formal guidance from the FDA is leading state and local officials from New York to Nebraska to begin shutting down some sales of CBD-infused products.

Given the legislative confusion, as well as enforcement from state and local governments, a group of lawmakers have asked for answers.

Last month, Rep. Chellie Pingree (D-ME) and 11 other lawmakers wrote to Scott Gottlieb at the FDA:

In light of the aforementioned state enforcement actions and the resulting confusion, we are calling on FDA to swiftly provide guidance on lawful pathways for food products with CBD. 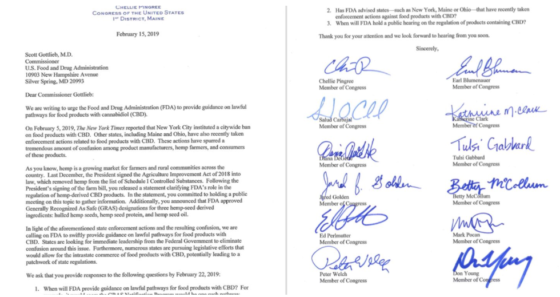 Back in December, Gottlieb released the following statement:

Given the substantial public interest in this topic and the clear interest of Congress in fostering the development of appropriate hemp products, we intend to hold a public meeting in the near future for stakeholders to share their experiences and challenges with these products, including information and views related to the safety of such products.

And just last week, Gottlieb ratcheted up his comments:

We’re planning to seek broad public input on this pathway, including information on the science and safety behind CBD. But we know that this process could take time. So we’re also interested in hearing from stakeholders and talking to Congress on possible alternative approaches to make sure that we have an appropriately efficient and predictable regulatory framework for regulating CBD products.

This brings us to Wednesday’s unexpected news that Gottlieb is resigning. The fear is that his sudden departure will now make CBD’s approval timeline even longer.

Gottlieb’s Resignation is a Short-term Speedbump, Which Should Actually be Interpreted as a Buying Opportunity for the Right CBD Stocks

Yes, Gottlieb’s resignation might prolong the shorter-term CBD approval process, but it’s not going to affect the market’s long-term growth.

Matt goes on to tell us we’re looking at an industry with the potential to be 55 times larger in just five years. From a recent note to subscribers:

We’ll also see CBD-infused edibles and beverages. There are already drinks at health and wellness stores with low levels of CBD. Instead of a sports drink that is high in sugar or water with a high pH level, you’ll be able to chug a beverage that contains the health benefits of CBD.

And If You Want One More Sign Of What’s To Come For CBD, All You Have To Do Is Look At Whole Foods

The high-end grocer (now owned by Amazon) recently enlisted a “seasoned trend-spotter” to make predictions about the hottest items for 2019. Can you guess which product made the top-10 list?

From a news report last week:

And while it will take some further legislative changes before Whole Foods is comfortable selling marijuana products, the passage of the 2018 Farm Bill, which legalized industrial hemp, could at least open the door for hemp-derived CBD products to be sold down the line.

We’ll give Forbes the final word:

… CBD-infused products aren’t going away. Today, nearly 7% of American adults use CBD products. That number is expected to grow to 10% over the next several years, and as CBD continues gaining popularity, it will continue to attract even greater numbers of new consumers into the market.