The data is improving and that should be a good thing.

I've variously argued (both on this platform and on my site) that the most important takeaway from last week was also the simplest. US equities hit new highs even has bond yields rose.

Here's a simple chart I used in my traditional Sunday week ahead preview that illustrates the point:

2019 has been all about the "disconnect" between stocks and bonds, with the former refusing to roll over despite the latter arguably yelling "recession".

Of course, the purported "discrepancy" isn't hard to explain. Expectations for central bank easing and the prospect that more monetary accommodation will help avert a downturn have given equities an excuse to ignore any dire warnings from bonds, which have rallied on a worsening global growth outlook, falling inflation expectations and rampant uncertainty. It goes without saying (or at least it should) that everything benefits when central banks pivot decisively dovish as the promise of lower rates and abundant liquidity supports bonds, equities and credit simultaneously, which accounts for 2019's "everything rally." And then there's the simple, mechanical support equities get from lower bond yields.

On Saturday, I suggested that if stocks could keep rising even as bonds pull back (i.e., as long-end yields rise), it would open the door to good news being greeted with cheers from risk assets rather than the jeers that sometimes accompany upbeat economic data when the "good news is bad news" regime (which has prevailed at various intervals in the post-crisis era) is entrenched, as it has been this year.

Fast forward to Tuesday and there's been a series of better-than-expected economic prints, including, obviously, a raft of upbeat June activity data out of China. While it's true that the Chinese economy grew at the slowest pace in nearly three decades in the second quarter, the closely watched retail sales/industrial production/fixed asset investment trio handily beat estimates for June. Even the Q2 GDP print was in line with consensus, which, assuming you believe the data that comes out of Beijing, means things are basically stable in the world's second largest economy. And, please, spare everybody the sarcasm about unreliable Chinese economic data. You may not know it, but that joke is so tired now that joking about the numbers has itself become a joke.

Meanwhile, stateside, Empire manufacturing rebounded 13 points in July following the worst monthly drop in history. That's according to the latest survey out Monday.

To be sure, it wasn't all good news. The new orders index remained negative and the employment gauge fell to its lowest since January of 2016, but the improvement in the headline was a welcome development.

On Tuesday morning, retail sales in the US doubled consensus estimates, printing 0.4% for June. The result was ahead of expectations on all major breakdowns. Factory output came in better than expected too.

Tuesday morning's data is pushing yields back up near last week's local highs, which, in keeping with everything said above, will pose a challenge for stocks. The question is: Is this a market that's really prepared to accept good news as good news again now that the Fed has all but committed to insurance cuts, or is the rampant uncertainty around how many cuts we will ultimately get still enough to usher back in the perverse "good news is bad news" dynamic?

How important is this for stocks at this juncture? Well, potentially pretty important. We are, after all, headed into the teeth of earnings season, so a rapid rise in yields could make for a rocky backdrop if it undercuts sentiment, making the market vulnerable to any high-profile misses or guide-downs. Of course, that cuts both ways. If rates rise in an orderly fashion on good data, stocks could be further buoyed, helping to either cushion the blow from any earnings disappointments or turbocharge things on any big name beats.

I'm not just speculating here. The bond-stock correlation across the pond (so, the correlation between the Stoxx 600 and German bunds) spiked last week as yields rose and worries about another bund tantrum proliferated. 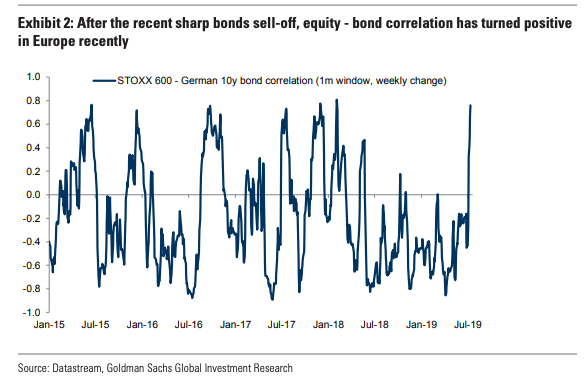 As Goldman reminds you, in a straightforward note out Monday evening, "higher rates are generally good for equities as they usually represent an improvement in growth expectations, but sharp increases in bond yields are likely to turn equity-bond correlation into positive territory and be a speed limit for equity performance."

Specifically, if US 10-year yields rise more than 2 standard deviations in a short window, the stock-bond return correlation tends to flip positive, meaning equities sell off with bonds. 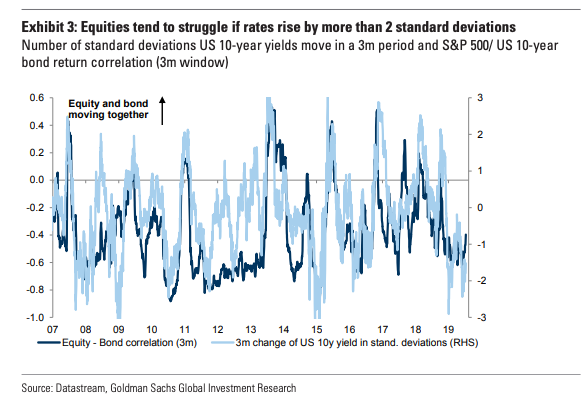 Remember, the simple fact that stocks and bonds rally simultaneously (as they have in 2019) over a given period doesn't necessarily mean the correlation is positive, depending on the window you use. Indeed, for the majority of the past two decades, investors have enjoyed a "have your cake and eat it too" environment, where stocks and bonds have generally rallied, while the correlation between the two has been generally negative. In other words, it's been the best of both worlds, as both pillars of a balanced portfolio performed well, and investors retained the diversification benefit.

But, again, when yields spike too quickly (as they did in late January/early February 2018 and then again in September/October), the correlation has a pernicious tendency to flip, to the detriment of stocks.

To be clear, this is nothing to panic about for the time being, and as I wrote over the weekend, the chances of another "tantrum"/VaR shock are probably a bit overstated in the financial media.

Still, considering the two episodes highlighted in red in the visual and knowing what we know about the tendency for stocks to falter on a rapid rise in yields over a short window, this is something to keep a close eye on with 10-year yields in the US now 20bp off the lows.