Market volatility is up in recent sessions, and END_OF_DOCUMENT_TOKEN_TO_BE_REPLACED

As tech takes a tumble this week, there END_OF_DOCUMENT_TOKEN_TO_BE_REPLACED

With Friday's slight correction, it's looking like shoppers may have taken some profits on Friday and used them to shop. Although we don’t have final Black Friday data available yet, the early reports indicate that “online sales on Thanksgiving Day were up 20% from a year ago”.

Some of last week’s enthusiasm for stocks was based on more positive comments regarding the US-China trade deal, even though the signing of the Hong Kong Human Rights and Democracy Act by President Trump dampened the optimism heading into this weekend. 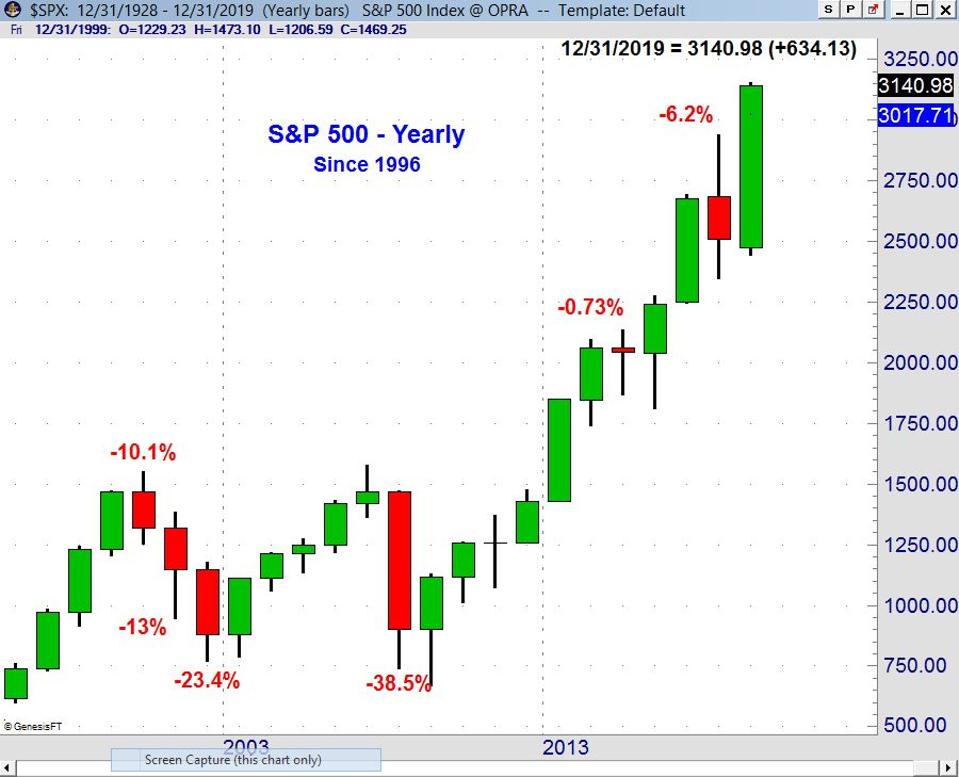 By March 2016, the advance/decline lines had made new highs and have not diverged from prices since then. I argued in both early and late 2018 that this was a sign that the bull market was intact, which has continued to be true. 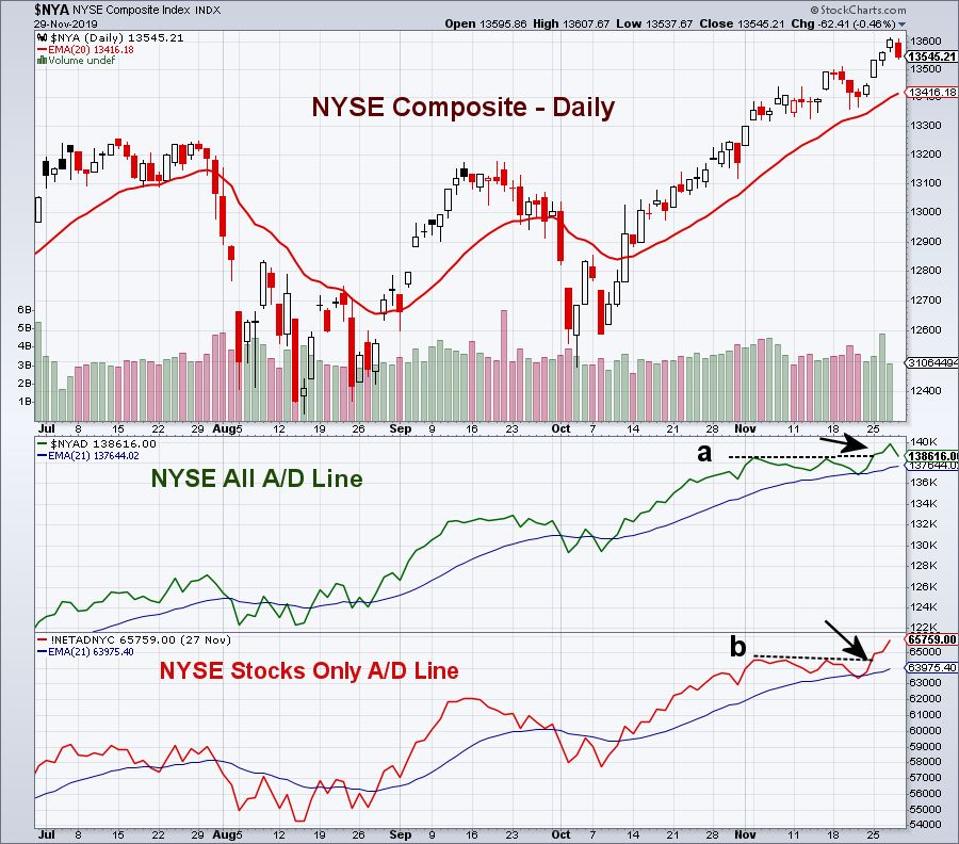 In last week's article, “One Economic Report to Watch in the Months Ahead”, I pointed out that the daily NYSE All A/D line and NYSE Stocks Only A/D line had not made new highs since early in the month, and therefore had formed negative divergences, (labeled a and b). These divergences were overcome with last Tuesday’s close, as both A/D lines surged to new highs and that confirmed a new rally phase.

The other major averages I watch (S&P 500, Nasdaq 100, Dow Jones Industrials, and the S&P Small-Cap) have exhibited similar behavior. This is a sign that the breakout of the recent trading range likely has further to go. It would now take a decline below the most recent lows to turn the A/D lines negative.

Two consumer-focused ETF's, the Consumer Discretionary Select (XLY) and SPDR S&P Retail (XRT), both led the S&P 500 last week. This is a good sign even though they were a bit lower on Friday. For the month, the S&P Value Index (IVX) was up 3.6%, as it continues to lead the S&P Growth Index (IGX), which was up 3.2%.

The yield on the 10-Year T-Note was a bit higher last week, but the daily momentum still favors even lower yields, with key support at 1.670%. Crude oil had a tough week, closing down $2.70 per barrel or 4.3% for the week. There is still major support in the $50-area. 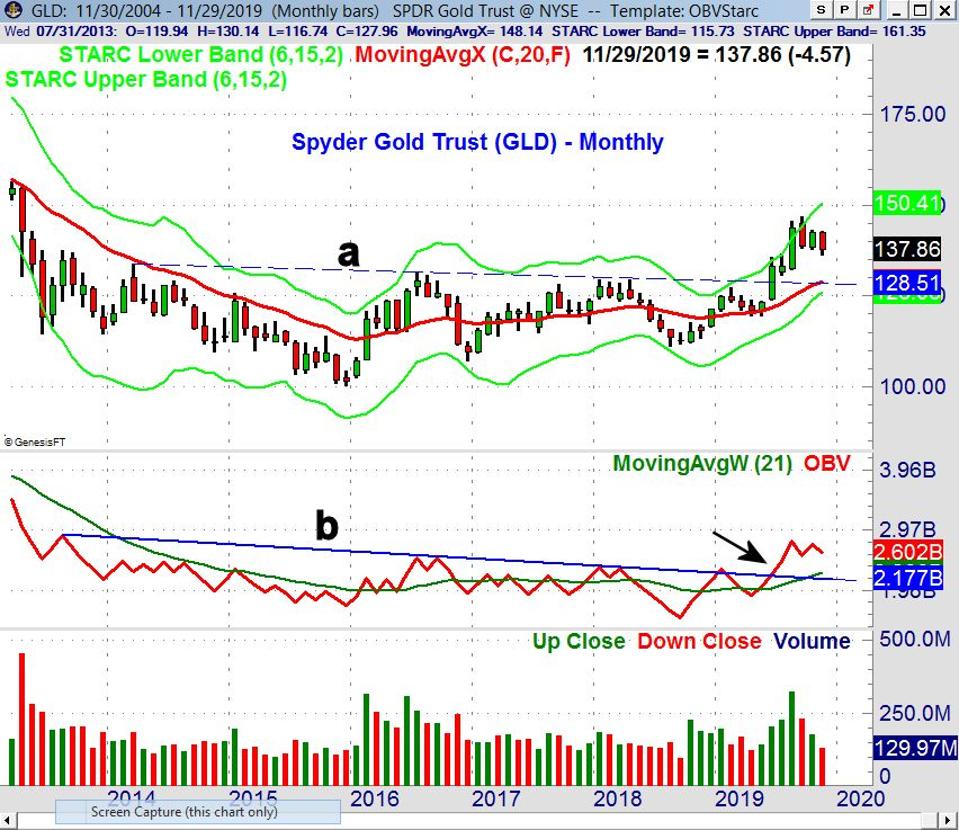 The Spyder Gold Trust (GLD) was barely higher for the week, but was down 3.2% for the month. This has not changed the longer term bottoming formation, as GLD closed above major monthly resistance at $128.41 (line a) in June. The price action was confirmed by the On Balance Volume (OBV) as it overcame the resistance going back to 2013 (line b). A weekly close above $139 will be the first sign that the worst of the selling is over.

The new highs in the daily A/D lines have erased one of my concerns from last week. On a weekly basis, in the NYSE, there were 1904 stocks advancing and 1147 stocks declining, which is a sign of strength. Despite last week’s gains, there are just 70% of the S&P 500 stocks above their 50-day MA's. This market indicator was over 80% at the July market peak, and over 90% in late February. This means there are still a number of stocks that look attractive. However, be careful not to chase prices. Picking the correct entry level is often the key to successful investing or trading.