Market volatility is up in recent sessions, and END_OF_DOCUMENT_TOKEN_TO_BE_REPLACED

As tech takes a tumble this week, there END_OF_DOCUMENT_TOKEN_TO_BE_REPLACED

Best Stocks for 2019: Adobe Will Stand Out This Earnings Season

Last December, we made an argument in favor of Adobe (NASDAQ:ADBE) based on its strong market position and fundamental growth rates. One of the most important drivers behind this strength has been ADBE’s stable revenue and high margins from its suite of Creative products (including subscription revenue), as well as its strong growth in expert services and marketing.

One of the important benefits of ADBE stock’s shift into services, subscription and cloud products over the last few years has been an improvement in margins. This is particularly critical right now as investors prepare for poor first-quarter earnings reports from some of the components of the S&P 500.

Many companies were able to show very good profit growth rates in 2018 because of the effect of the 2017 tax cut. While that did a lot to increase after-tax net margins, it disguised the negative performance common at the operating margin level.

Operating margin is the ratio of the income earned after operational expenses (before interest and taxes) divided by total revenue or sales. On average, operating margin was flat in 2018 and is forecasted to be negative in 2019. ADBE hasn’t been immune to the soft growth in margin last year, but they have a distinct advantage — 91% of total sales is driven by recurring revenue rather than new sales.

Over the last year, ADBE’s earnings per share grew by 42.86%, which was assisted by the tax cut. However, unlike many firms, topline growth — which has nothing to do with the tax cut — rose 17.61% on a trailing-12-month basis and 46% over the last 24 months.

We expect those trends to continue in the short-term, which will make the company stand out among its peers during the upcoming earnings season. 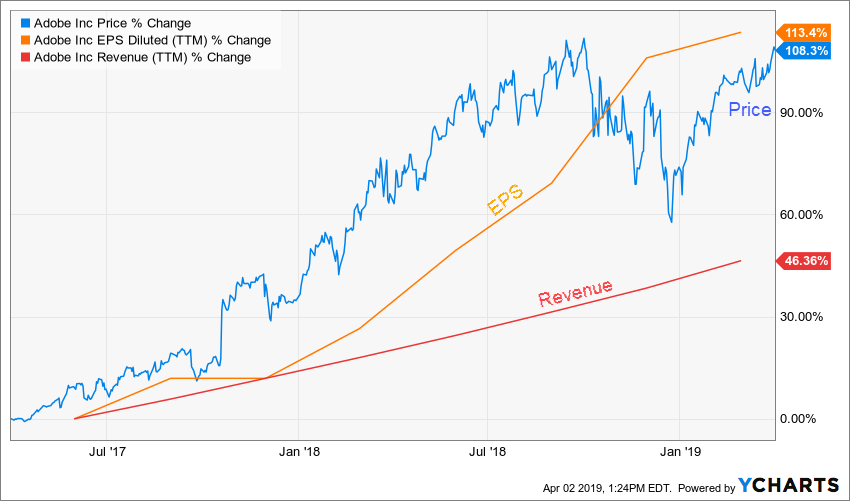 When we wrote our original recommendation, the ADBE stock price was forming an inverse head-and-shoulders pattern that was expected to be confirmed once the stock crossed above $245 per share. That pattern was confirmed, but its initial price target in the $278 range has not been met yet. Price growth has been slow as the stock retested its neckline breakout point in late February-March.

Because the breakout has been slow, another interesting pattern has had time to form which signaled a higher likelihood for more gains. In the following chart we have outlined a “diamond” continuation pattern that was confirmed on April 1 with a break to new highs.

Although diamonds can be difficult to identify, the historical data suggests a high probability for it to precede new short-term highs. We believe this happens because the pattern is the result of a period of distribution when weaker traders are either moving out of tech or just taking profits while new traders are accumulating the position. This pattern of distribution and accumulation could explain why the trading range goes through a pattern of widening and then narrowing swings.

Our upside target remains in the $278 range, but we are more confident the stock will reach that level in the short-term following this recent breakout. One investment strategy could be for investors to leave the stock uncovered through that target, but then consider a hedge or short call position if the stock consolidates in the $278 range, where it may run into the resistance from the prior highs.

A Few Issues to Watch With Adobe

Last December, we warned that investors should be wary of economic slowing in Europe and the UK and how that may affect ADBE’s revenues. This persistent issue is still a problem, but we don’t believe Adobe is exposed to it to a greater extent than its peers. One way to manage this risk could be to combine a long position in ADBE with a short position in another tech stock (e.g. semiconductors) that has greater exposure to European economic problems. If economic conditions worsen significantly, the profits from the weaker short position should offset the losses in ADBE.