We’ve been pounding the table on Lucid Motors END_OF_DOCUMENT_TOKEN_TO_BE_REPLACED

Bank of America Stock Could Be a Buy

Shares of Bank of America (BAC) have been showing signs of life lately. In early Tuesday trading, the stock was up by more than 2%. However, those gains have evaporated to some degree, with shares up just 65 basis points in midday trading to $28.25.

Still, BoA stock has been trying to build some bullish momentum over the past few days, along with some of its peers like Citigroup (C) , Goldman Sachs (GS) and JPMorgan (JPM) .

It's got investors wondering if this low-valuation bank is a worthwhile buy or if it's only bouncing with the overall market before eventually heading lower.  Financials are a tough group. It's one of the first sectors to sell when recession fears rise and more lately, rates have been a big worry. As the yield curve tightens, it hurts banks' profitability.

While the earnings have been solid, the valuations are low and the dividends are for the most part attractive. Investors just haven't been drawn to this group. Let's look at the charts. 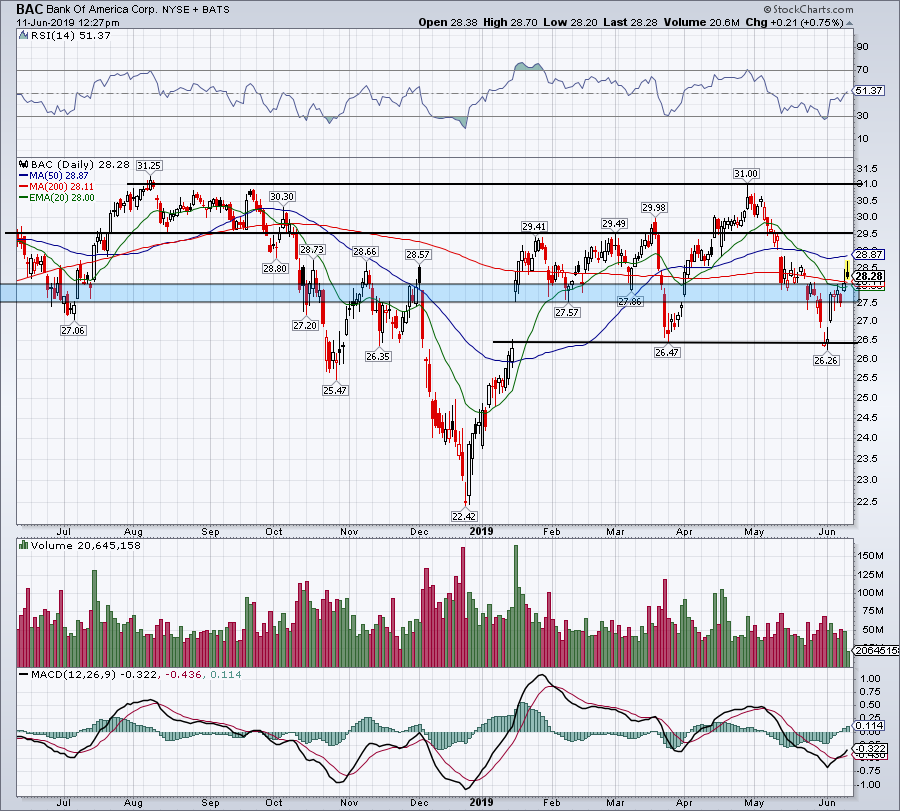 Ultimately $29.50 gave way, allowing Bank of America stock to breakout and run to $31. A yield curve inversion scare ultimately drove BofA stock back below range resistance ($29.50) and ultimately through range support ($27.50 to $28). In fact, this price action took place twice, in both March and May.

Currently, we're seeing Bank of America struggling to push higher and the 50-day moving average appears to be acting as resistance. Even over this moving average, I would conservatively assume that $29.50 range resistance will act as a short-term ceiling to Bank of America. That makes it a tough buy right here.

If this area fails as support, a decline to the $26 to $26.50 area could be in the cards. Below that area and BAC stock may very well be in trouble. However, if a pullback materializes that far and holds, it will present investors with a solid buying opportunity.