If you’re looking for an optimistic take on Aurora Cannabis (NYSE:ACB), then move along. You won’t find any positivity in today’s piece, as Aurora stock remains a widowmaker.

The absence of even an ounce of bullish commentary isn’t for lack of trying. I’ve scoured every time frame and filtered through countless indicators; Yet, the evidence remains clear and wholly one-sided. Aurora stock is bearish, and banking on lower prices is still the best bet.

Let’s begin with the price trend, which has been locked in a death spiral since last March. The weekly, daily and even intraday time frames are all pointing lower. Such is usually the case when a stock is courting 52-week lows. The 200-day, 50-day, and 20-day moving averages are careening lower and sit heavy atop the stock.

Initially, rallies ascended to the 50-day before turning lower, but now sellers are rejecting rebounds swiftly at the 20-day. From peak-to-trough, ACB stock has fallen 82% from last March’s peak.

The downtrend’s momentum leaves much to be desired, as well. Though the Relative Strength Index (RSI) indicator could be starting to form a bullish divergence, I wouldn’t put much faith in it. We’ve seen other such rays of hope quickly fail during this ten-month downward spiral.

Besides, the November RSI downswing that Aurora stock shares have failed to match during the current drop was driven by a dismal earnings report. It’s hard to match that type of momentum on the next downswing. 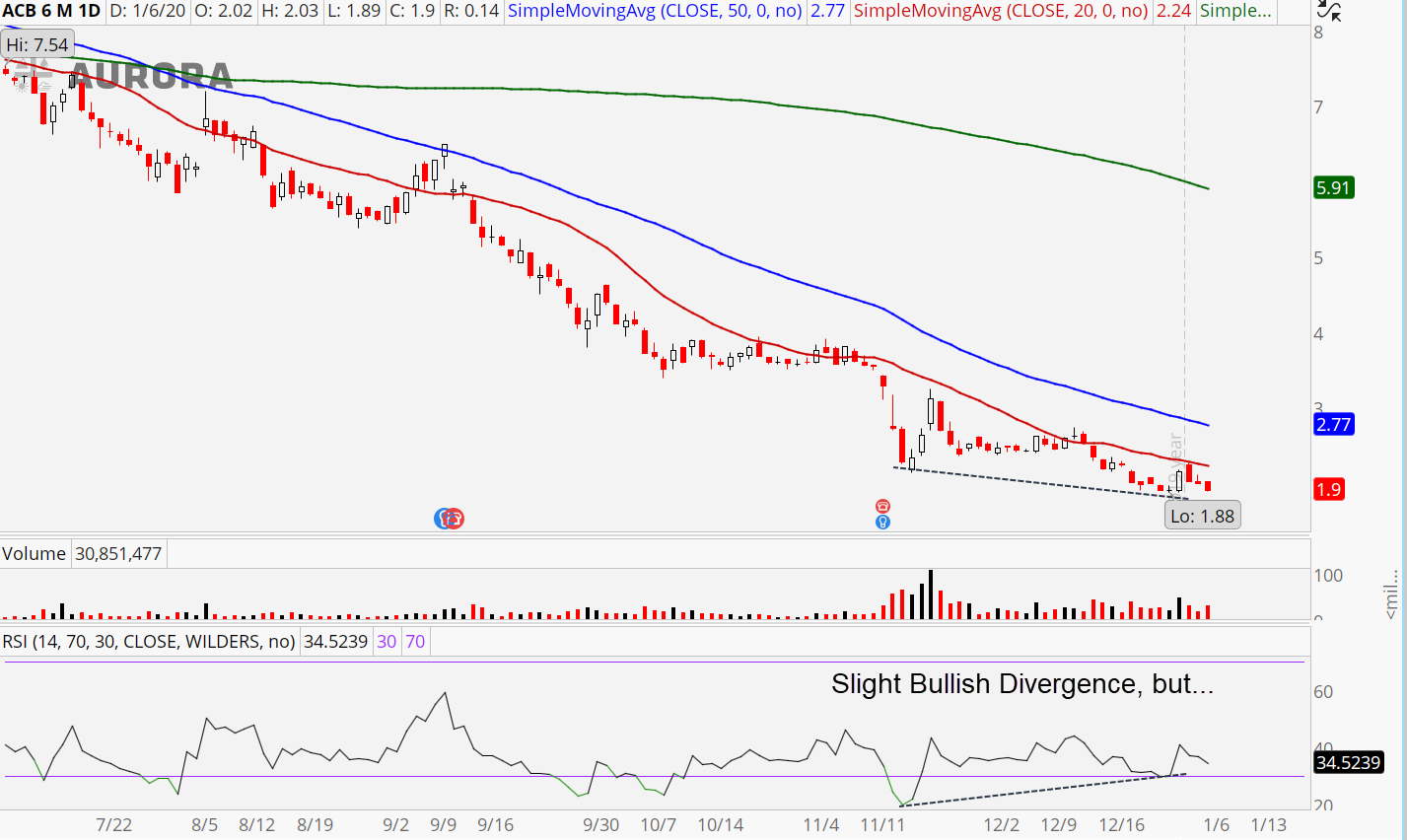 As for volume, we’ve seen a few accumulation days crop up over the past two months, but these high volume up days have proven powerless in the face of the steroid-injecting bears that now dominate the field. Plus, a broader view reveals they’ve been outnumbered by distribution days — confirming sellers still very much hold the high ground.

Even nasty downtrends can experience robust rebounds when they stretch too far, though. This is where measures of overbought and oversold come into play. Unfortunately, we can’t even make the case that Aurora stock is oversold! Because of the steady drumbeat of selling over the past month, the decline has been gradual, and it still sits close to the descending 20-day moving average.

The final nail in the coffin comes from comparing the price action of ACB stock to that of its peers — namely, Canopy Growth Corp (NYSE:CGC) and Cronos Group (NASDAQ:CRON). Technicians call this relative performance. Remember, if you’re shopping for marijuana stocks, you have choices — and a side-by-side comparison reveals Aurora stock is the worst of the bunch. CGC stock is the best looking right now, boasting a price trend that is trying to turn a corner. It has also just above its 50-day moving average, and has stabilized over the past quarter. 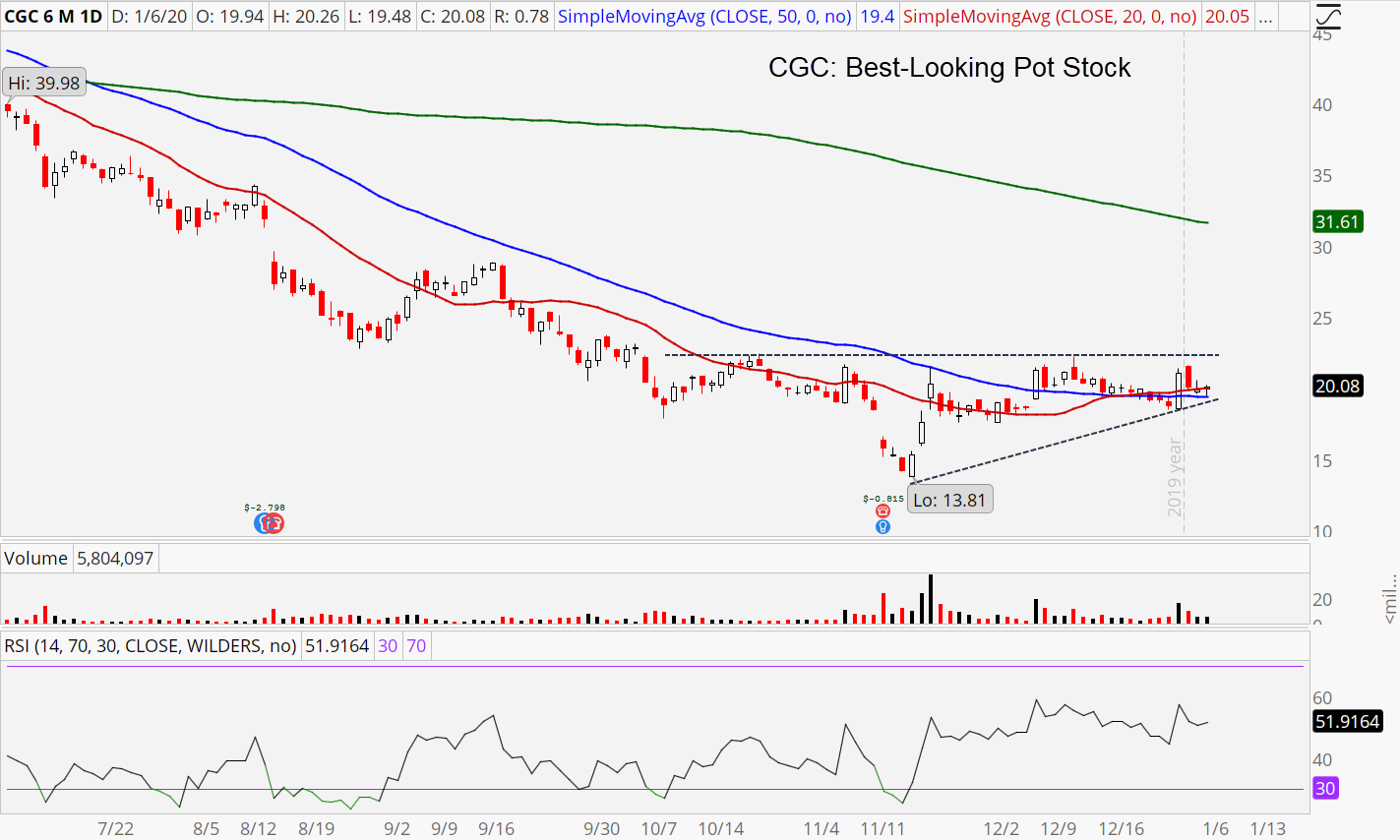 CRON stock is also slightly better-looking because it hasn’t yet fallen back to last November’s lows. That said, it is back below its major moving averages and likely headed to new lows eventually.

I’m obviously not a fan of buying Aurora Cannabis stock here, but bearish trades have some issues due to the stock’s extremely low price. You could short stock with a stop above the pivot high of $2.27. Buying puts is also an option, but they’re pricing in a pretty big move so you’d need the stock to drop beneath $1 to really win big. I’d suggest the $2 or $3 strike puts out to March.