Aurora Cannabis: On The Mend

In a matter of months, Aurora Cannabis (ACB) has turned from a company facing a questionable financial future to one completely on the mend. The Canadian cannabis company now has operating expenses in line with demand, setting up a realistic path to profits. The biggest obstacles to a bullish investment thesis here is valuation and unpredictable industry shifts.

The Canadian cannabis industry built production capacity and an operating structure for a massive global business. At one point, the company actually thought it needed to produce enough cannabis to supply the whole world with a goal of reaching up to 700K kg of annual capacity. The problem here is that several other Canadian companies had the same plan, while the global market didn't even materialize.

Entering the year, Aurora Cannabis needed to align costs with current market demand realities. The global market never materialized, and the real opportunity is now in the U.S., Canada and, possibly, Germany.

Canopy Growth Corp. (OTC:CGC) is out with an analysis where a C$70 billion global opportunity by 2023 is 90% focused on these three countries, with Germany having a 10x opportunity off a very small base. In essence, the majority of the opportunity in the near term is the U.S. and Canada. In the case of stocks listed on the U.S. exchanges, the opportunity is limited to Canada and U.S. CBD markets. Along with Germany, these markets are listed at a TAM of C$22 billion, with far over half the revenues attached to the U.S. CBD market alone.

For this reason, large global operations don't make a lot of sense. The path taken by Aurora Cannabis to drastically reduce costs is the most logical and viable path, especially considering a lot of the growth opportunity in Canada remains based on shifting illicit sales to legal. The company can't spend more to make this happen faster. 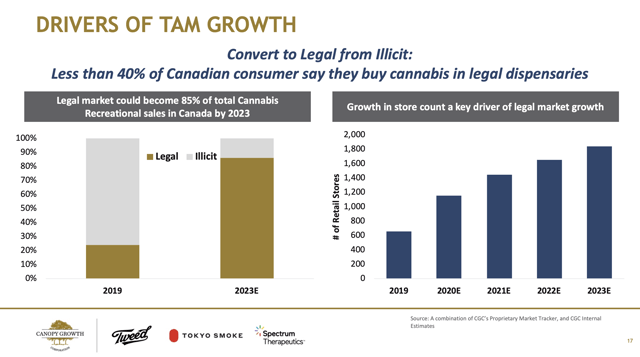 Aurora Cannabis now forecasts SG&A expenses for FQ1 at C$42 million for an annual rate of almost C$170 million. The company was spending C$102 million per quarter entering 2020. This amount didn't even include the C$21 million in depreciation costs and another C$20 million in share-based compensation. 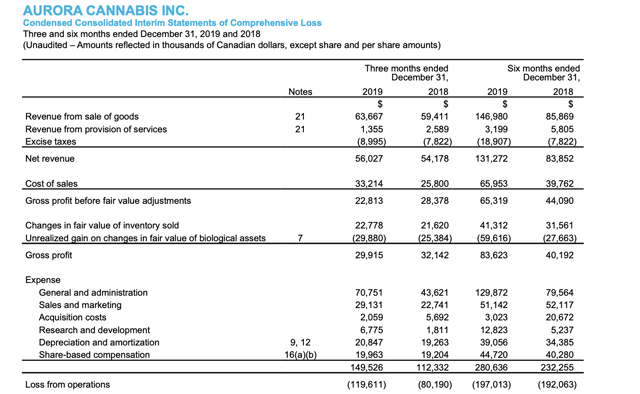 With analysts forecasting sales of C$85 million in the September quarter and C$92 million in the December (FQ2) quarter, Aurora Cannabis is finally on track for reaching EBITDA positive. The only possible hiccup is the inability of the sector to predict future demand.

A prime example is the value sector going from 6% of the market a year ago to 23% in the last quarter. As the Canadian market looks to grab more illicit sales, the value market is likely to gain far more share.

The issue here is that the value brands have bounced around, with the leaders last Q3 now struggling behind a new brand. As an example, Brand B went from 31% of the value market when the value market was small last Q3 to only 10% as the market quadrupled by Q1. 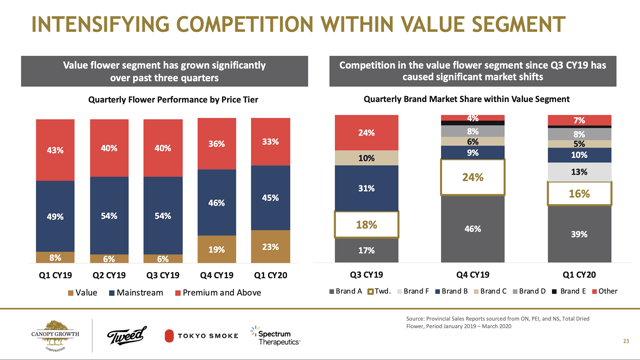 So, while the ability to drive consistent revenues remains a major concern, Aurora Cannabis can improve the inventories and gross margins by further streamlining production operations. The company plans to shut down the following production facilities in the next two quarters to reduce and consolidate production:

The company has the 230,000 kg Aurora Sun facility in Canada only scaled to six grow bays, allowing for substantial scale as needed with market growth. This new, efficient facility eliminates the need for any small, high-cost facilities to remain open.

The key here is that FQ3 production was 36,207 kg, while the company only sold 12,729 kg. Aurora Cannabis produced 3x the production needed in the last quarter alone. These facilities being closed had nearly 40,000 kg of annual production, or only 10,000 kg per quarter. The amount reduces the March quarter production to ~26,000 kg, when only 13,000 kg was needed. Not only do these facilities need to be removed from the production lineup, but the company needs to scale back other facilities.

So, while Aurora Cannabis was ahead of the game on SG&A expense reductions, the company has been too slow on cutting production and reducing inventory levels. The cannabis company had to record another C$140 million inventory charge.

The real upside here is the gross margin picture. The company had near-industry high gross margins of 54% on cannabis revenues and 44% overall in the last quarter, with Cantor Fitzgerald predicting upside to margins by an incredible 8 percentage points.

So, while Aurora Cannabis is clearly on the mend, the stock is already pricing in this scenario. The stock trades at a forward EV/S multiple of 6x, while stocks like Curaleaf Holdings (OTCPK:CURLF) and Green Thumb Industries (OTCQX:GTBIF) trade at only 3x multiples. The MSOs continues to trade at half the multiples of the Canadian stocks, while already being EBITDA-positive. 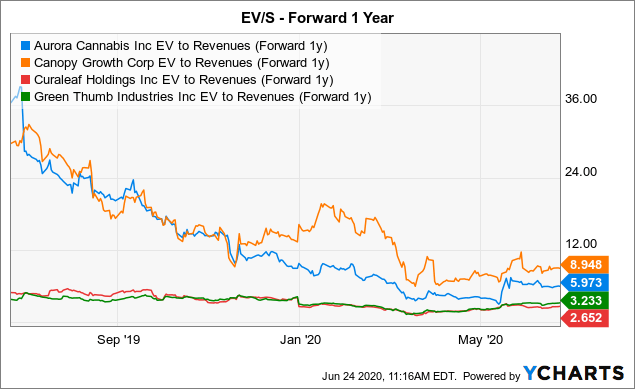 With the September revenue targets topping C$84 million and with 50% gross margins, Aurora Cannabis should have a slight EBITDA profit. The stock just isn't worth the current market valuation based on the hopes of reaching a minor profit target.

The key investor takeaway is that Aurora Cannabis does appear set for EBITDA positive results and maybe even outright profits here by the end of 2020. The stock is far too expensive compare to U.S. peers here.

Investors should watch for a dip toward $10, where Aurora Cannabis will trade at multiples closer to the U.S. cannabis stocks.