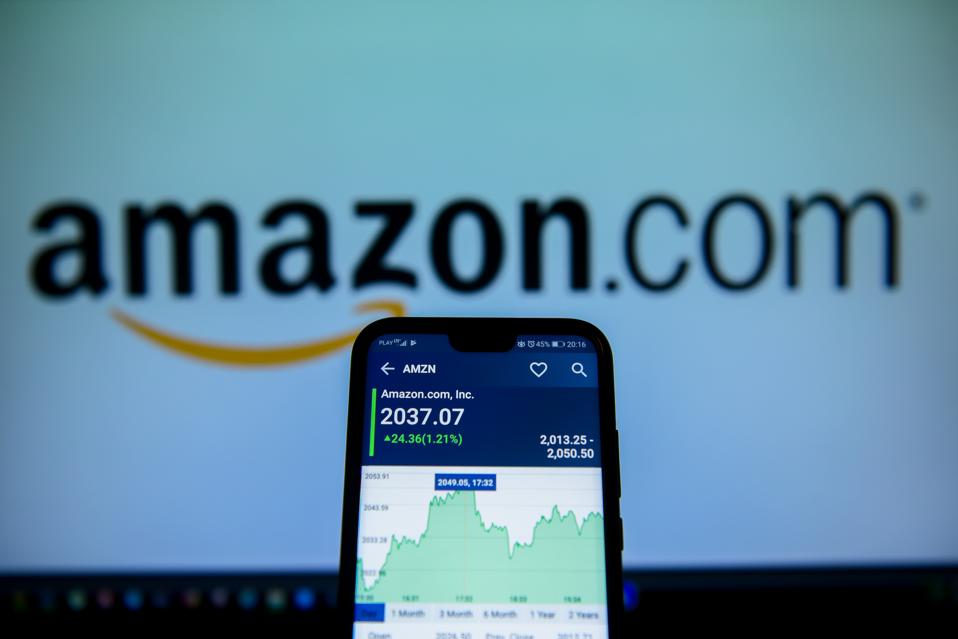 If you want to know if we're still in a bull market, don't ask Alexa. Just watch Amazon's stock price.

If it were any other stock, this sort of consolidation wouldn't be noteworthy. But Amazon isn't just another stock—it's a market bellwether. That makes the recent double top pattern concerning. 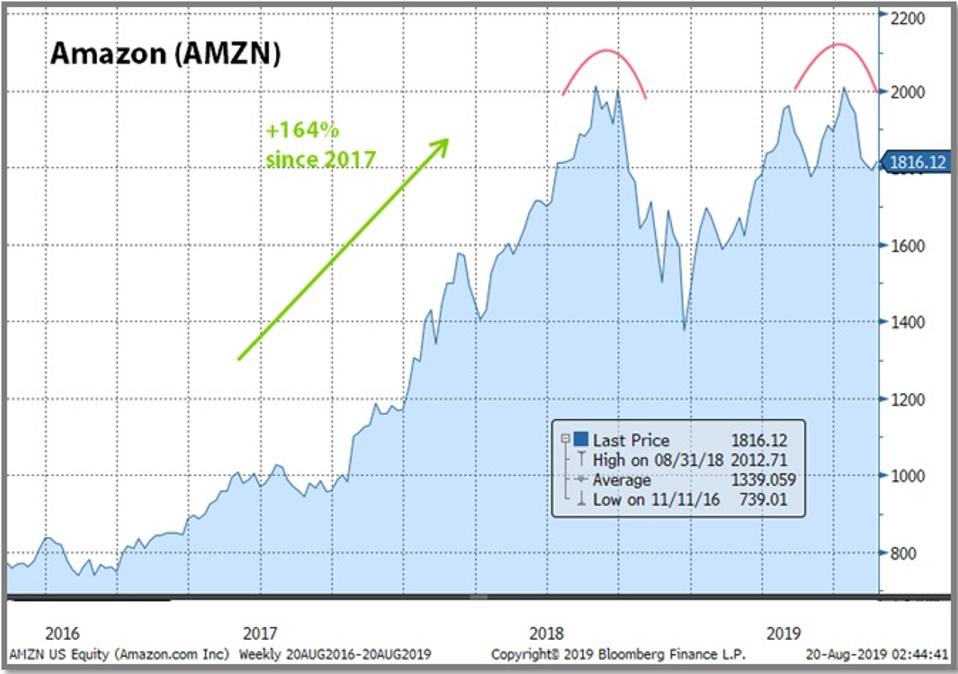 Every bull market is led by a few key 'generals.' These are typically stocks that outperform, surge in popularity, and become archetypes for what the cycle is all about.

Amazon checks all of the boxes.

Similar to generals on a battle field, market generals are normally the last to fall when cycles near their conclusion.

The last buyers in a bull market tend to be folks who sat on the sidelines for a long time. Once they capitulate and decide they want in, they gravitate toward stocks that are the easiest to say "Yes" to (i.e. big companies they're familiar with).

It's premature to declare a top for Amazon. But one factor that enhances the probability involves where it topped.

Big round numbers act as price magnets, and then become areas where major tops are common. Amazon's recent top came right after piercing $2,000 per share and a trillion dollar market cap.

To better illustrate why a potential Amazon top may be a concern for the broader market, let's review a few other examples.

I vividly recall overhearing a conversation in 2007. An analyst asked a very smart portfolio manager which stock he'd own if he could only pick one for the next decade.

In hindsight, it's easy to understand why. The energy sector was a key sector in the last bull market, and SLB was one of its market generals.

"Peak Oil" was a big investment theme at the time. If you thought the world was running out of oil, it was easy to extrapolate forward the profit growth oil service firms were enjoying. Schlumberger was the "best of breed" oil services name.

When the stock made a double top in June 2008, Wall Street was still bullish. At the time, there were 20 Buy ratings, 3 Holds, and zero Sells (source: Bloomberg). 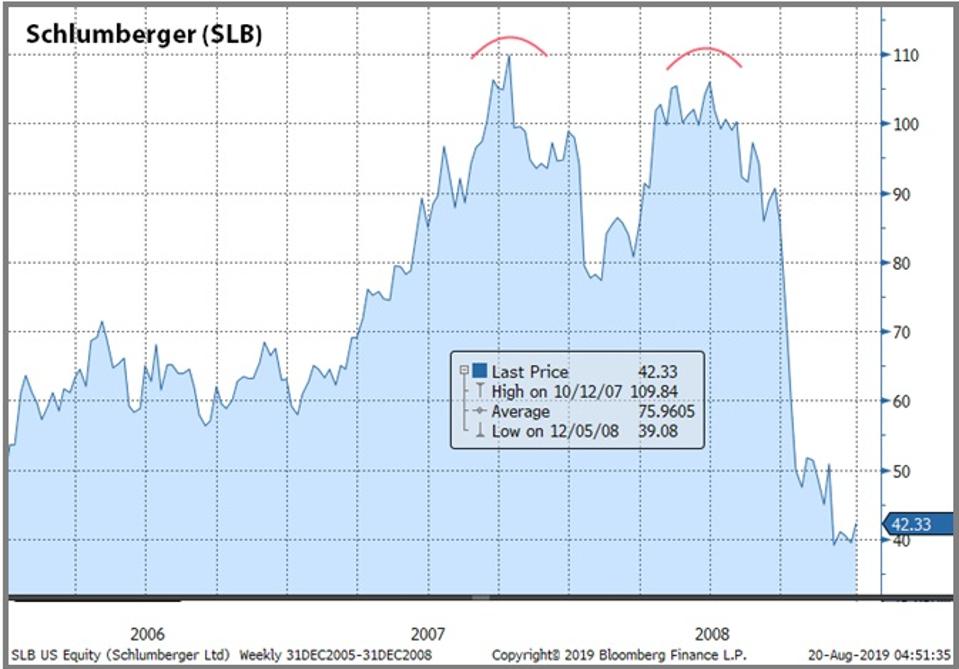 After Schlumberger failed to make a new high in the summer of 2008, it was only a matter of months before the broad bear market kicked into high gear.

Of course, no one envisioned in 2007 the dramatic impact fracking and horizontal drilling would have on the world's oil supply. And few could have fathomed that over the next 12 years, Schlumberger would go on to shed over 30% of its value.

Microsoft was a market general during the 1990s Tech Boom.

As that cycle was approaching its climax, Microsoft shares soared 261% from 1998 through the end of 1999.

When Microsoft failed to eclipse its previous high in the spring of 2000, the shares were still a consensus Buy on Wall Street. 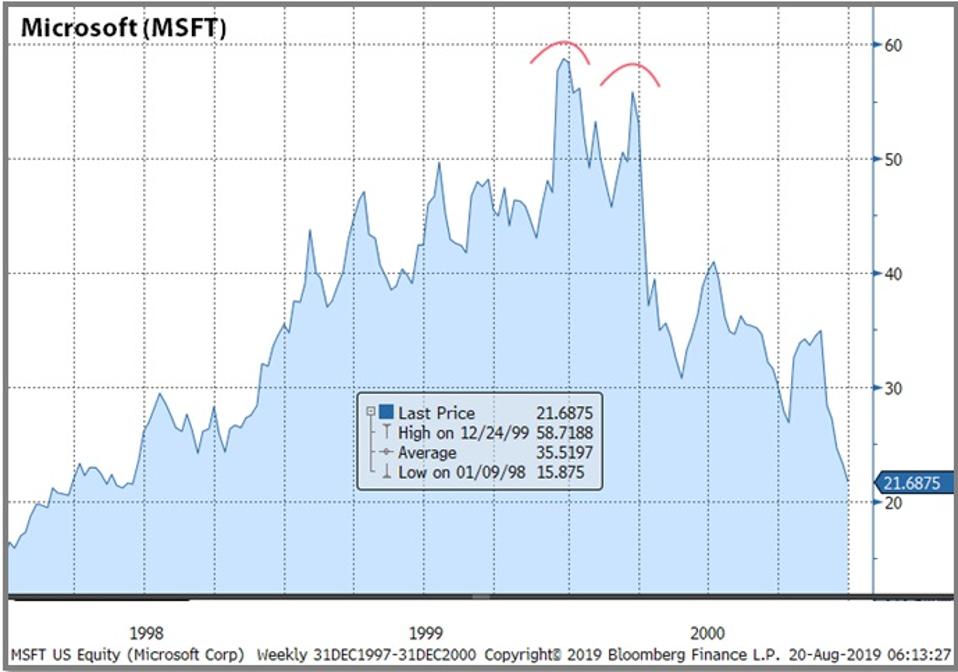 However, antitrust concerns and evidence of slowing growth led a prominent Goldman Sachs analyst to downgrade Microsoft in April of 2000. Other analysts followed. Before long, investors were stampeding out of Microsoft and the tech sector.

It took until 2017 for Microsoft to finally break above its previous high from the year 2000.

There are a couple important lessons one can glean from studying market generals.

First, once a cycle is firmly established, it's important to identify these stocks and monitor them, whether you own them directly or not.

Second, while it can be profitable to ride these stocks in a late-cycle environment when leadership thins, one must be vigilant in managing risk. When the cycle makes its final turn, the heroes of a bull market often turn into villains the next cycle. Just like Microsoft and Schlumberger in the previous two cycles, stocks like Amazon may very well underperform in the next bull market.

Third, beware of optimistic sentiment that becomes lopsided. The world is constantly changing. Remember that markets move on surprises and shifting expectations.

In early 2009, just one-third of the analysts covering Amazon had Buy ratings. A steady conversion of bears to bulls is what moved the stock into the stratosphere. Today, it's a much different setup. There's more room for downgrades.

To help illustrate the counter-intuitive nature of sentiment cycles, I ran a back-test sorting the market by analyst sentiment.

Ironically, the most out of favor stocks on Wall Street went on to perform best, and vice versa. 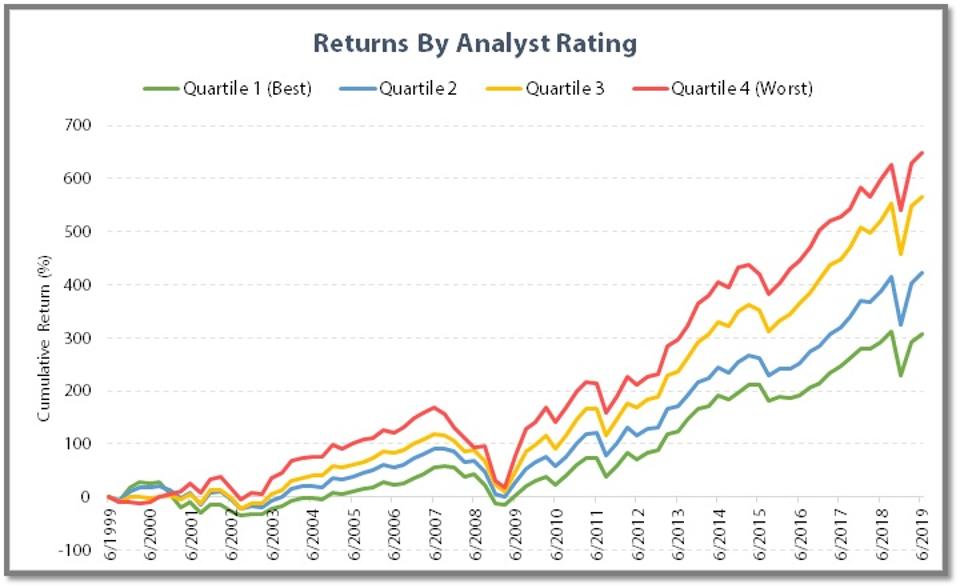