Alibaba May Be The Best Tech Stock To Own Right Now 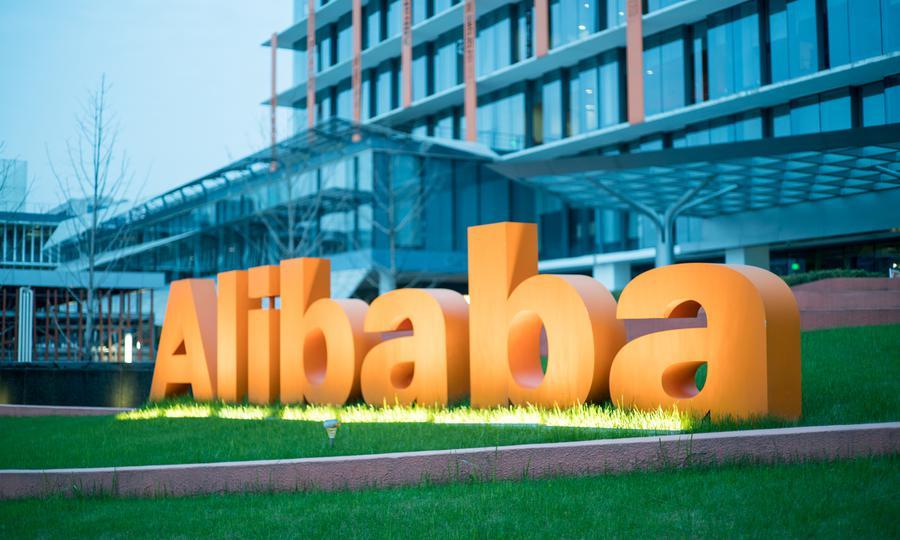 Alibaba (BABA) has been pummeled over the past few weeks. Shares are down by 20% from their recent high just a few weeks ago. 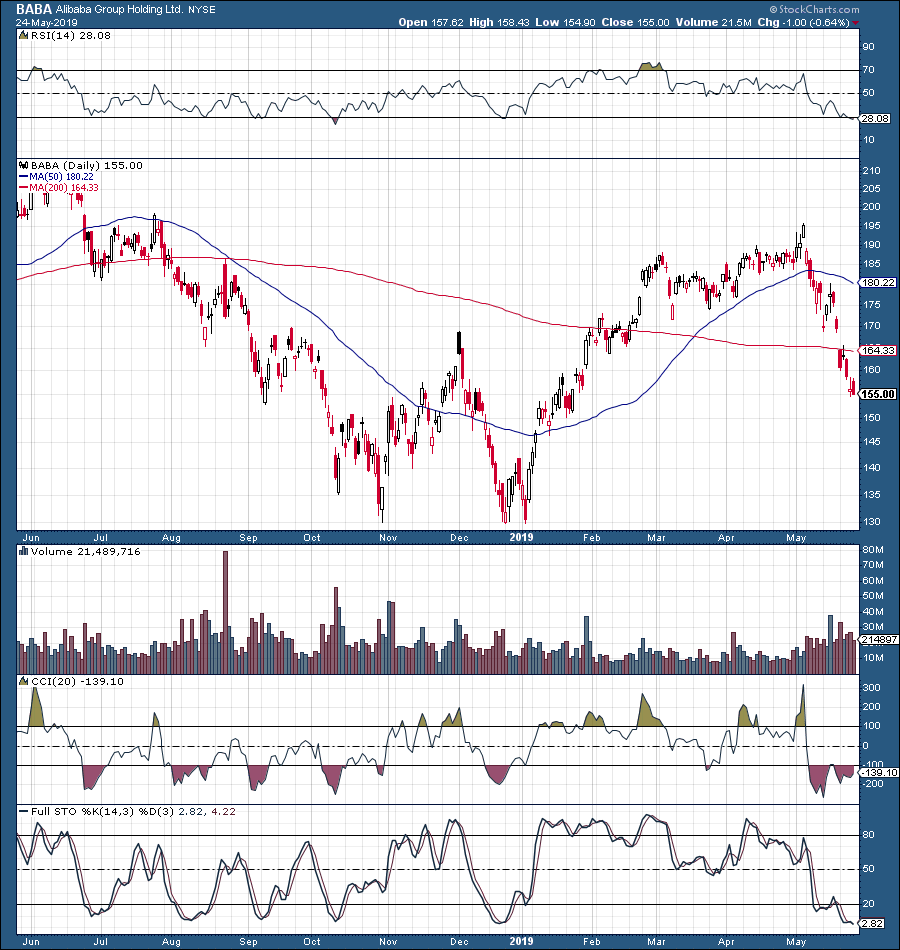 However, this selloff may prove to be transitory, as U.S. imposed actions against China in trade should have a limited effect on Alibaba’s revenues and EPS growth long term.

The stock has gotten remarkably oversold in recent weeks, and its current valuation looks exceedingly attractive given the company’s potential for substantially increasing revenues and EPS going forward.

Don’t underestimate the purchasing power of the Chinese consumer. Consumer spending in China has essentially tripled over the last 10 years and has no apparent signs of slowing down. 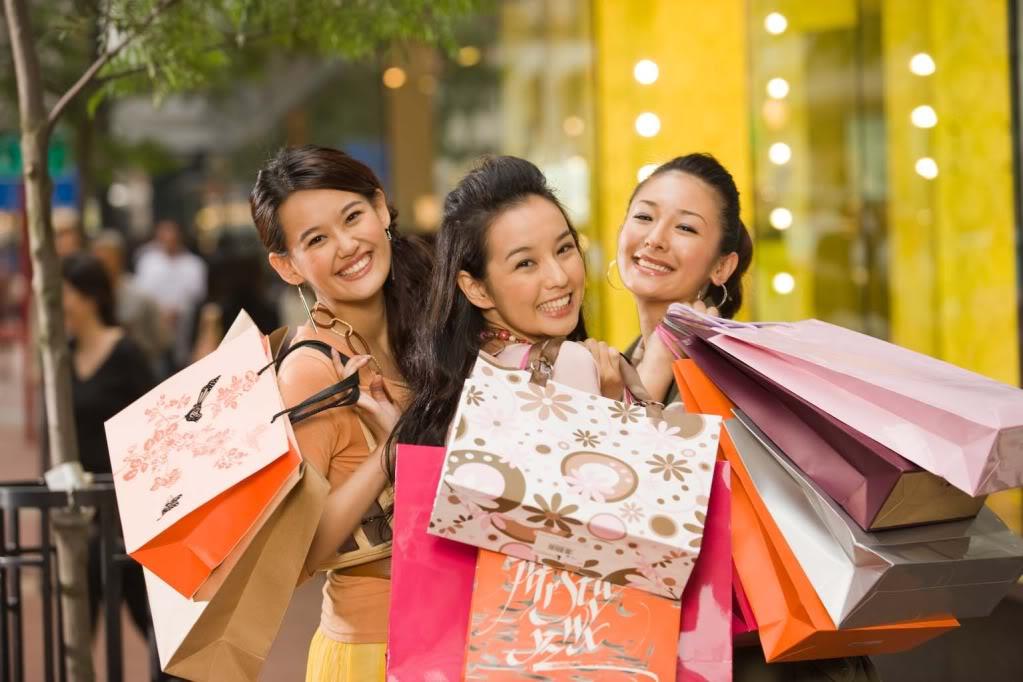 Also, the country has a great advantage in that it can heavily stimulate its economy due to its highly centralized power structure. Never mind the fact that it has nearly 1.4 billion citizens.

China’s purchasing power GDP is expected to increase by about 37% from 2019 to 2023. Naturally, the increased spending should prove very beneficial towards Alibaba’s revenues and profits.

China’s GDP should continue to expand, no matter what happens with the U.S. First off, China has a nuclear option in which it could dump over a trillion dollars of U.S. treasuries on the market. This would likely cause substantial havoc in U.S. markets, and it is in the U.S.’s best interest that things do not escalate to this level.

It's possible U.S. has no retaliation for such a move, as China’s national debt-to-GDP ratio is substantially lower - only about 47%. versus the U.S.’s 105%. This is partly why trade tensions are unlikely to significantly negatively impact the Chinese economy, China’s GDP, and ultimately, Alibaba’s profits long term.

Sources like Statista.com and others predict Chinese GDP will expand by 50% from now to 2024. This is remarkable growth that the U.S. and other nations could only dream of. 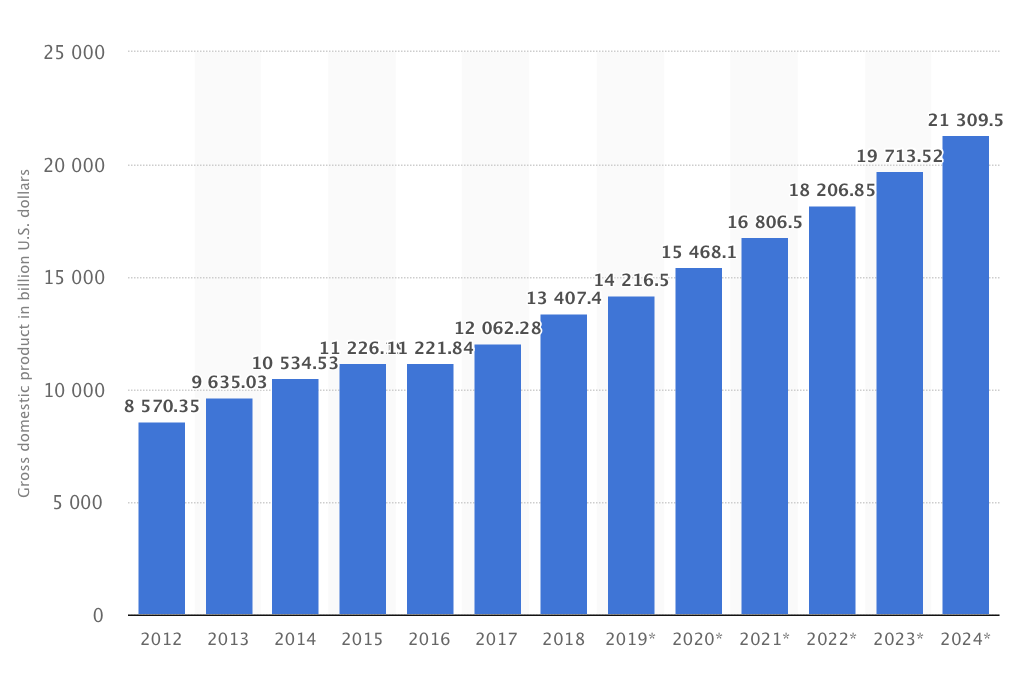 So, why would you go with an investment like Amazon (AMZN) that is trading at 48 times forward EPS estimates when you can own Alibaba at under 24. Additionally, Alibaba is set to expand revenues by over 35% this fiscal year, while Amazon is projected to produce just 17.7% YoY growth.

With Alibaba, you are essentially paying half the price for a company with twice the revenue growth. Additionally, due to Asia’s enormous population, the company likely has the potential to produce high-double digit revenue growth for several years (5-10) going forward.

Given that the company is expected to deliver $6.52 in EPS (consensus estimates) next year, the stock is trading at only 23.77 forward earnings.

Financial metrics in general appeared quite bullish in fiscal 2019 - a trend that is likely to continue into 2020 and beyond. 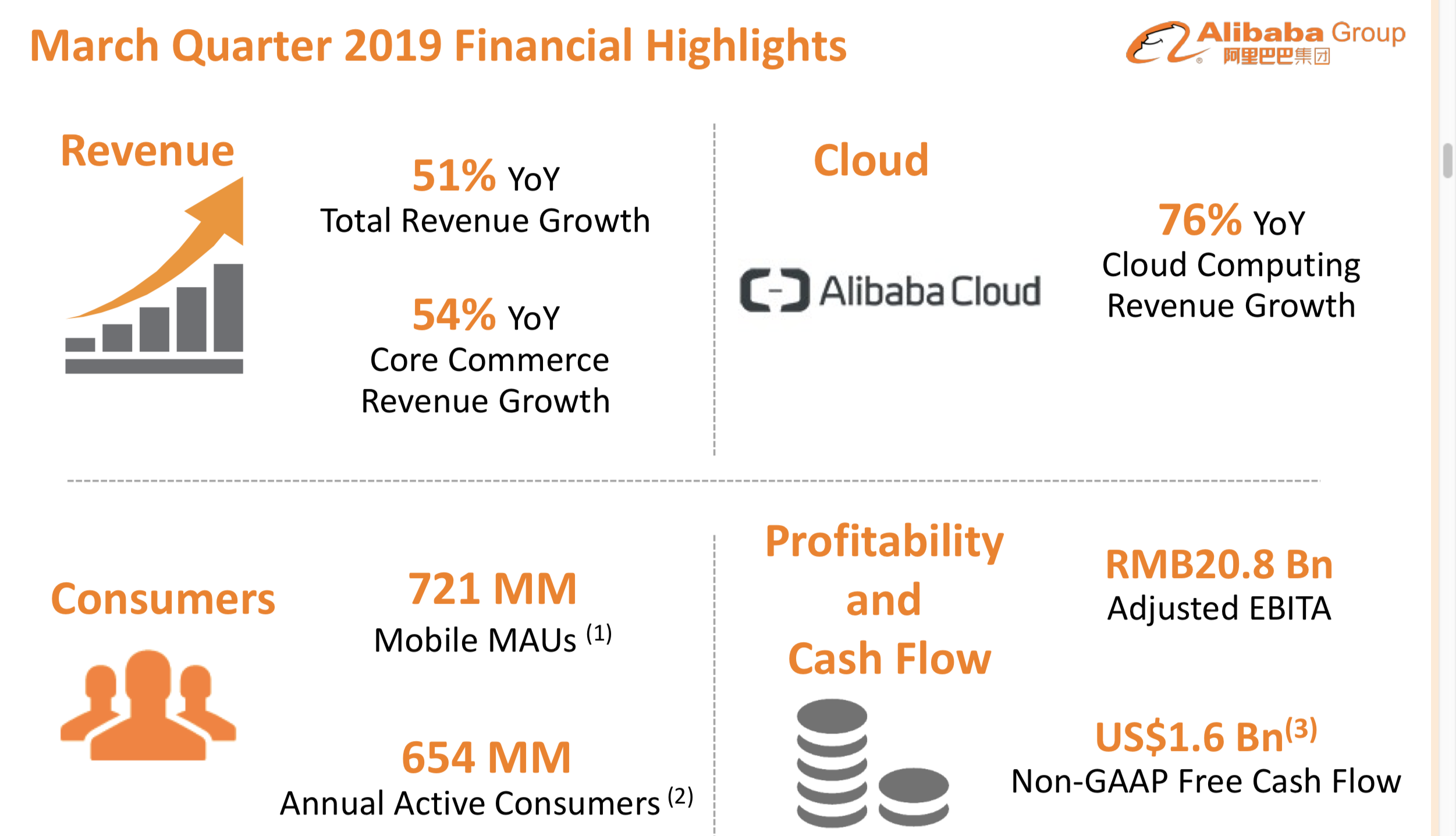 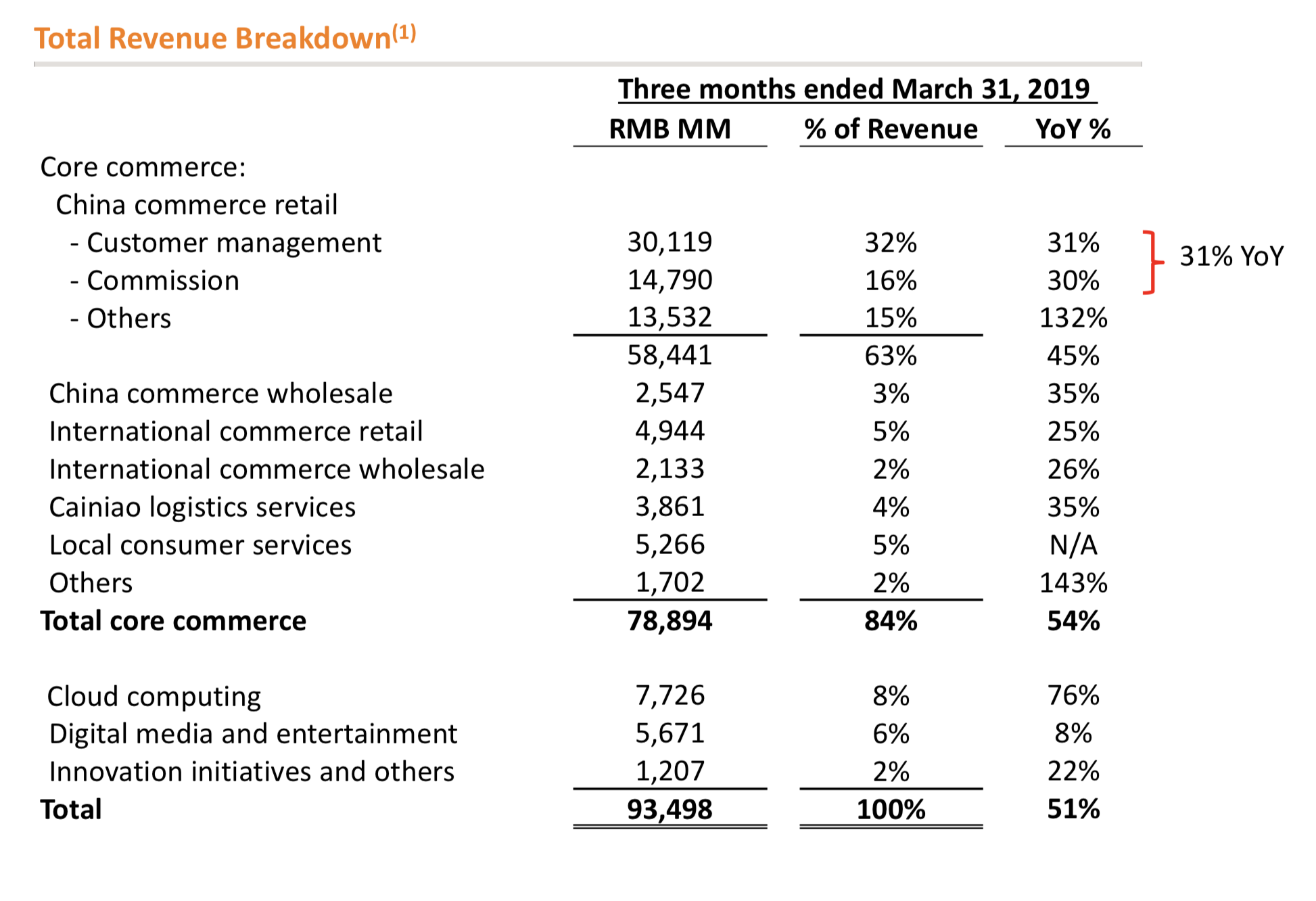 China’s core commerce segment represented about 80% of total revenues in the last quarter, and it successfully grew revenues by 45% on a YoY basis.

Nevertheless, alternative businesses like cloud, media entertainment, and others are continuing to acquire market share and grow their own revenue streams. Moreover, these secondary businesses are likely to become well-monetized in the future, adding to Alibaba’s remarkably high core business profitability.

The ongoing trade rift with the U.S. and China should have an extremely limited effect on Alibaba’s revenues as well earnings growth. The vast majority of its users and consumers are concentrated in China and other parts of Asia that have very little or nothing to do with U.S. tariffs. 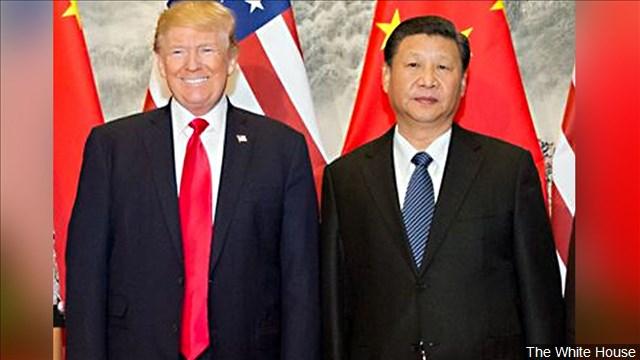 On the other hand, it is healthy to remember that a significant Chinese or global slowdown may put pressure on the company’s growth in the future.

Alibaba has 19 Strong Buy recommendations, versus just 2 Buys and one Hold, per analysts on Nasadaq.com. Also, the 12-month price target on the stock ranges from $195 to $280. Alibaba is trading at $155 right now; so, the stock would have to appreciate by 26% from here just to get to analysts’ lowest-end targets. The consensus 1-year price target on Alibaba is about $220.

So, the stock would need to gain 42% from here just to achieve consensus figures. Also, there are higher estimates, which indicates some analysts believe BABA will be 80% higher a year from now.

I remain on the more bullish side of this stock, and significantly higher prices are attainable 1, 3, 5, and 10 years down the line.

Alibaba is possibly the best growth, long-term value stock you can own. If trade tensions persist, perhaps the company’s shares could slide a bit lower. But this would only create a greater long-term buying opportunity, in my view.

U.S. trade tariffs and other anti-China economic policies should have a very limited effect on Alibaba’s growth and value prospects. The company primarily operates in Asia, and is therefore well-insulated from any kind of U.S.-imposed threats.

At under 24 times forward EPS estimates, Alibaba is a steal, as the company’s revenue growth rate is projected to be around 35% next year.

Given the enormous market the company operates in and the relative strength of the Chinese consumer and the overall Chinese economy, Alibaba is likely to produce very strong double-digit revenue growth for years.

The continuous inflow of revenues from its core business will also enable the company to significantly grow its secondary operations, including in media, cloud, and other areas. Ultimately, Alibaba may become the undisputed top technology conglomerate in China, possibly even in the world.