One of the things which held gold back from rallying in May was the extreme liquidation of gold mining shares. The past two months was indeed a bad time to be a holder of gold stocks, as the PHLX Gold/Silver Index (XAU) fell 17 percent from its February peak. As we’ll discuss in this report, however, the short-term outlook for the gold mining stocks has improved based on an important technical factor. This in turn could pave the way for a gold comeback by later in June.

Gold prices have been largely subdued of late, with the June gold futures contract making no real progress in the last six weeks. Every time it looks as if gold is about to rally, it has encountered strong resistance at its 50-day moving average and has been pushed back. The main culprit to gold’s underperformance has been the steadily increasing value of the U.S. dollar index (DXY). It’s no secret that the steady rise in DXY (below) has served as a major headwind for the yellow metal since a stronger dollar erodes gold’s currency component and makes gold less attractive to own in dollar terms. 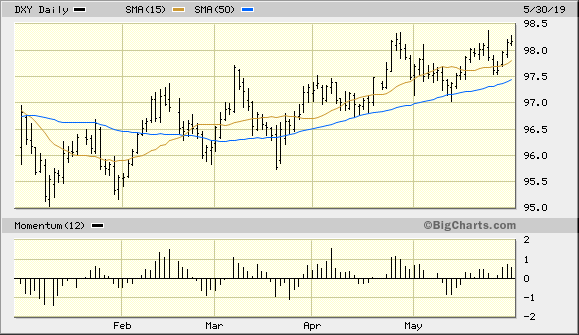 While the dollar has been gold’s biggest obstacle to reversing its downward slope of the last three months, the huge sell-off of many large-cap, mid-tier, and small-cap gold producers and exploration firms hasn’t helped gold’s cause, either. Historically, the overall trajectory of gold stock prices has served as a barometer for near-term gold demand. The reason is that when informed investors sense that the outlook is favorable for purchasing gold, buying gold stocks is an excellent way to benefit from rising gold prices due to the leverage that owning gold mining equities affords.

By contrast, however, when the XAU index is in serious decline – as it has been this spring – the near-term outlook for physical bullion prices is assumed to be unfavorable. The XAU chart shown below reflects the scope of the selling pressure in the mining stocks in the last two months. 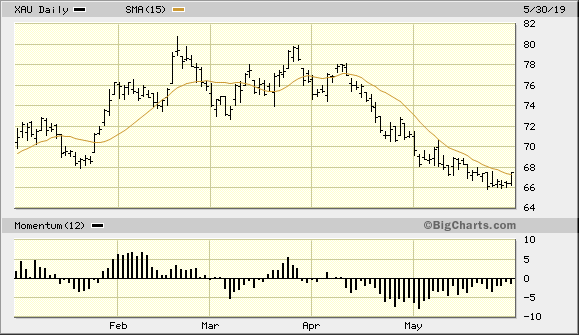 One of the most remarkable features of the XAU’s decline since February’s top is that the index has failed to close decisively above its 15-day moving average in the last seven weeks. I use the 15-day MA to identify the dominant immediate-term (1-4 week) health of the gold miners as a whole, for when the XAU is unable to close above the 15-day MA on a weekly basis it’s an undeniable sign of weakness. It’s highly unusual for the XAU to go as long as it has without even so much as a single close above the 15-day MA. This speaks to the extent of the liquidation experienced among the actively traded miners in April and May.

Prices alone don’t always tell the complete tale for a given industry group. The number of stocks within that industry making new 52-week highs and lows provides a more complete picture. The new highs and lows for dozens of actively traded mining shares reveal the extent of incremental demand for those equities. Whenever the new lows are above normal for any length of time, as they have been since March, bad things are sure to follow for the XAU. For the new highs and lows reflect more than any other factor the near-term path of least resistance for equities.

My favorite way of measuring the incremental demand for the gold stocks as a group is to look at the 4-week rate of change (momentum) of the new highs and lows among the 50 most actively traded gold shares. The following chart shows that the trend of the new highs and lows has been extremely weak in the last several weeks. This in turn has paved the way lower for gold stock prices. Yet in just the last couple of trading sessions, the 4-week rate of change of the highs-lows has shown significant improvement – the first of any kind of meaningful improvement in several weeks. 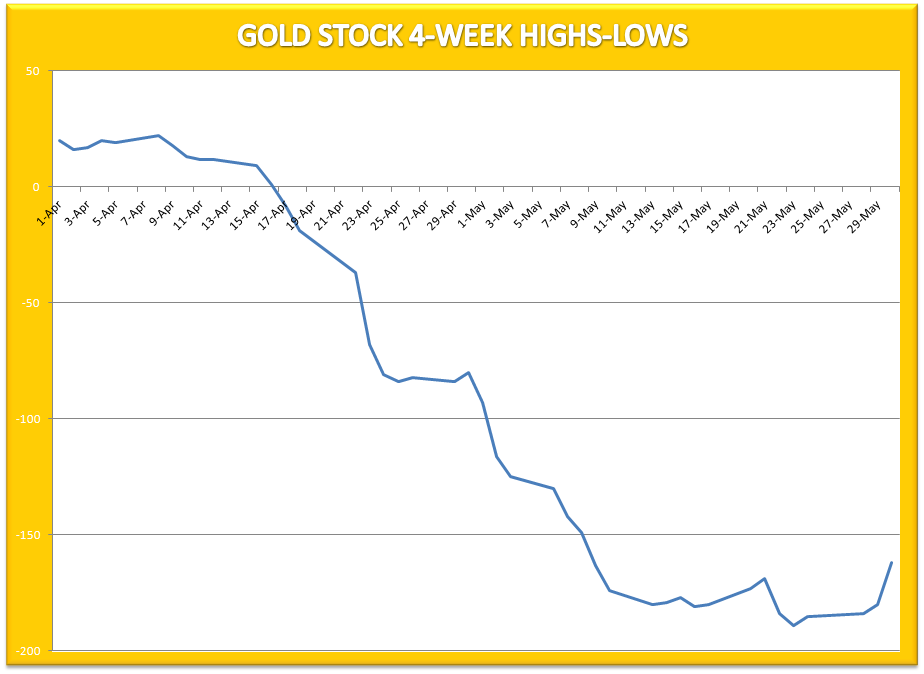 Moreover, my rate of change projections for the new highs and lows strongly suggests that the gold stocks have an excellent opportunity to rally in the coming days. Gold stocks should have an easier time moving higher heading into June since the downside internal momentum that has plagued the market is now in the process of reversing. In other words, the momentum of the cumulative highs-lows for the actively traded gold stocks is now turning upward again.

While it’s still a bit too early to wave the bullish flag on the gold stocks, if the XAU index closes above the 67.44 level on May 31 we’ll have the first indication of an immediate-term (1-4 week) bottom in several weeks. Under the rules of my trading discipline, a 2-day higher close above the 15-day moving average is required to confirm an immediate-term bottom. And if the XAU can close above 67.44 on Friday, we’ll have that signal.

Now in order for gold to show enough improvement to confirm an immediate-term low, we should ideally see the June gold futures price finish above its widely-watched 50-day moving average on a weekly closing basis. That means that the gold price would have to close above the $1,290 level on May 31 to send the first indication that the gold bulls are serious about regaining control of the metal’s near-term trend. The gold price was just below the 50-day MA (blue line in below chart) as of this writing on May 30. 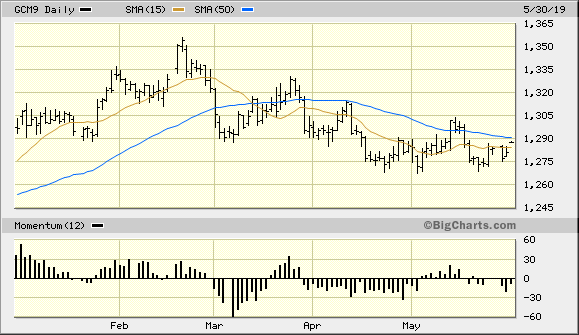 In the last few reports I made the case that gold already has the “fear factor” in its favor, especially as it concerns the U.S. stock market. Recent selling pressure in equities has given at least a minor boost to the gold price, and I expect that gold’s fear component will continue to attract inflows in the coming weeks. But in order for gold to enjoy a sustainable rally, the fundamental factor of a weakening U.S. dollar is necessary. To that end, the next few days could prove vital to determining gold’s next sustained directional move.

Gold and the gold mining shares haven’t had this much potential to confirm an immediate-term bottom in several weeks. While it would be premature to automatically conclude the best-case scenario for the yellow metal, traders should nonetheless stand ready to take advantage of a possible buying opportunity next week. However, until gold and the XAU have confirmed that a bottom has indeed been established, I continue to recommend a cash position.