A Little Market Chaos Is Just Fine With These Stock Traders

Under a bland surface, anarchy reigns in stocks. For the people paid to trade them, that’s not a bad thing.

This earnings season, when one company blows up, another surges. Intel Corp. goes down, and Microsoft Corp. rises. Hit by disparate moves, stocks are falling out of step with each other at one of the fastest rates in a decade. The name of the game has been rotation roulette.

“As opposed to everybody just throwing the baby out with the bathwater in the second half of last year, this feels more normal,” said Diane Jaffee, senior portfolio manager at TCW, which had $200 billion under management at the end of March. “That’s more healthy. That is the way investors should be thinking, as opposed to ‘Oh my gosh, the world is going to end.’ ” 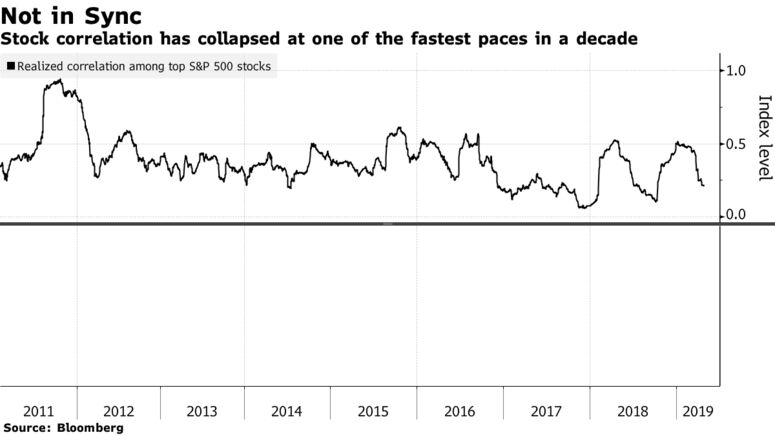 With almost half of S&P 500 firms done reporting earnings, equity correlations have collapsed, as different stocks chart their own course. So evenly has good and bad news been spread out, that in the day after reporting, the average company’s shares haven’t budged, moving just 0.03 percent.

Twitter Inc. rallied 16 percent on Tuesday after the social media site reported strong user growth. Two days later, Xilinx Inc. had its worst day since the turn of the century. 3M Co. suffered its biggest hammering since 1987’s Black Monday after cutting its profit forecast. Microsoft’s 3.3 percent climb on Thursday made it the third U.S. company to top $1 trillion in market value.

When the dust cleared on one of the busiest stretches of the first-quarter earnings season, the S&P 500 capped what was by far its calmest three-week stretch of the year. 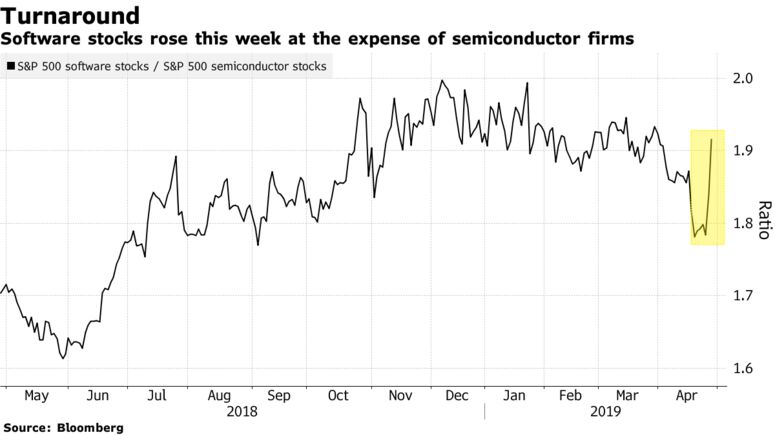 “If everything is going up and it’s just kind of a mad scramble, that’s a little bit more cautious, where you might want to look to de-risk,” said Aaron Clark, a portfolio manager at Boston-based GW&K Investment Management managing $37 billion. “But it has been a little bit more of this sector rotation. It’s not just one big trade, not just a big pile into equities and everything is going up.”

Industries are having their worst moments at different times. Last week it was health-care’s turn as concerns over “Medicare for All” mounted. The group rebounded this week along with high-flying FAANG firms, while semiconductor and industrial companies took their cues to fall. The end result was an S&P 500 that hardly moved.

Rotation within sectors has been evident, too, particularly for technology. While lousy earnings from the likes of Intel and Xilinx sent the S&P 500 semiconductors index to its worst week of the year, software companies rose 3.2 percent, notching their longest weekly winning streak in almost three years.

At roughly 24 percentage points, the gap between the best and worst industries this year is quite large -- the widest in nine years. Normalized for the 17 percent gain in the S&P 500, however, and the spread is the smallest since 1995. 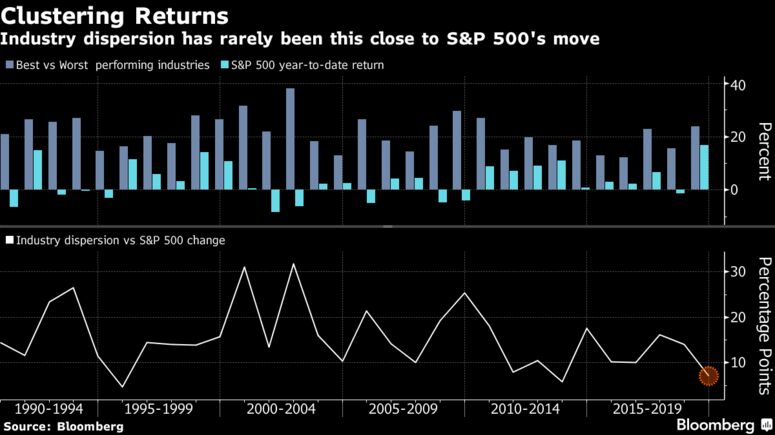 It helps too that the biggest beneficiaries lately hold larger weightings in the benchmarks. Software and services companies make up more of the S&P 500 than any other industry group. Health-care, this week’s best performing sector, is the index’s second largest sector.

“Clearly it’s not all a one-way trade, if it were all a one-way trade -- up or down -- we’d be much more concerned,” said Matt Toms, chief investment officer of fixed income at Voya Investment Management. “We do not read the idiosyncratic issues popping up industry by industry as being something that has aggregated enough to become a defining trend. We see it as a sign of normal differentiation as fundamentals ebb and flow by industry. It’s a sign of resilience ultimately.”