A Boring Article About 2 REITs

This research report was produced by The REIT Forum with assistance from Big Dog Investments.

Both REITs deal in exceptionally high-quality real estate. They each have substantial exposure to "retail" space within their portfolios. However, we see TCO offering a much better value, given the current share prices for each REIT:

We will start with BPR.

We closed out our position in Brookfield Property REIT. We don't consider this a material trade since it was only .01% of our portfolio (rounding). We estimate that BPR would carry a risk rating around 4.5. It wasn't part of our long-term plan, but we held some shares because we had an extremely low-cost basis resulting from the buyout of GGP and wanted to see how it performed.

For subscribers still hanging onto shares, this looks like a viable time to harvest the gains if desired. We don't expect to have BPR under frequent coverage because it doesn't match our main coverage areas well enough.

Valuation doesn't seem too high, but it is no longer dirt cheap. We refused to sell it earlier when the price was dreadfully low.

Shares carry a 6.67% dividend yield currently, but coverage is tight in the way we like to calculate it:

The other reason for a risk rating of 4.5 is that their leverage is extremely high: 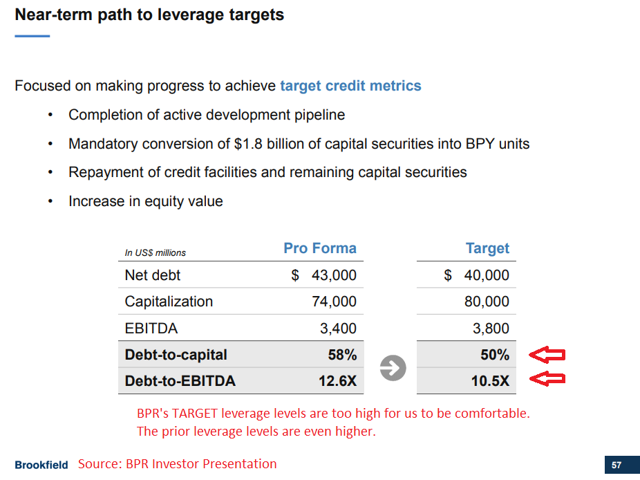 While this isn't a "bearish outlook" for BPR, it is highlighting the high level of risk and why we decided to simply lock in the gains on our tiny exposure and walk away.

Management makes a compelling appeal to shareholders on the potential for enormous returns: 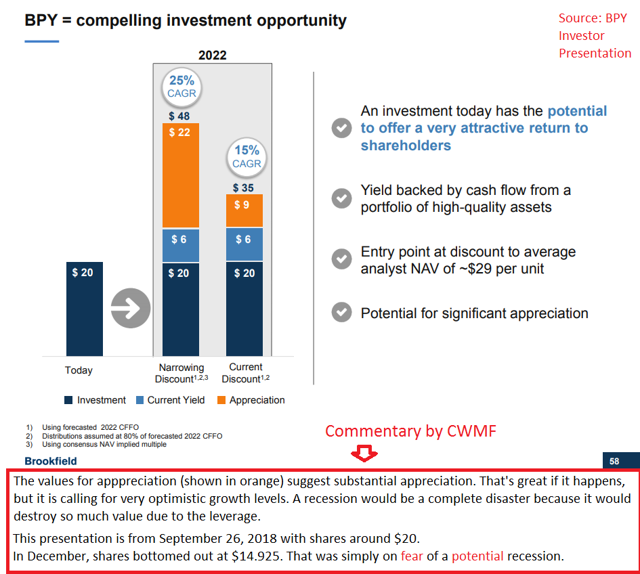 As great as their presentation looks, shares slide around 25% from that point through their bottom in December, but they have since recovered (trading around $20.11 right now, 3/13/2019).

Our shares weren't purchased during December though. We acquired them through a buyout of GGP. We had the opportunity to choose shares of BPR or Brookfield Property Partners (BPY). They are generally the same investment, but BPR is structured as a REIT. We weren't thrilled by BPR, but buying them through GGP created a substantial discount to market value for shares of BPY. Since BPY and BPR are essentially the same investment in different wrappers (one a REIT, the other a partnership), prices should be very similar. Additionally, shares of BPR can be exchanged for shares for BPY, so there would be no reason we can fathom for BPR to be valued below BPY.

The final returns on the investment look like this:

Our initial thesis for BPR was built upon the idea of buying shares at a large discount through GGP.

After the buyout was announced, we had the opportunity to buy shares of GGP, picking "cash" in the buyout process, and get over 60% of our initial investment returned to us in cash. The result was a two-step process.

The cash which wasn't recovered during that process was our effective cost for the shares of BPR.

Note: Technically, this was a "merger". We have used the term "buyout" since the majority of the payment came in the form of cash.

We bought GGP in multiple transactions. The merger had been approved by management, but still needed to go to a shareholder vote. We were comfortable investing there and took a significant position, while GGP was very cheap. To make the deal more appealing to investors in the United States, BPR was created. It would have the exact same fundamentals as BPY, but it would be structured as a REIT. That made it more attractive for many investors because of the dividend status.

If the buyout was approved, shareholders would be able to elect to have either shares of BPR or shares of BPY. They could also choose whether they wanted their payment to be mostly cash or mostly stock. We wanted mostly cash with the remainder in shares of BPR.

Shortly before the vote, GGP had rallied, and we decided to close out over 99% of our position for a moderate gain. We were closing it to prevent downside risk if the vote wasn't approved.

The small position that we kept was so we could provide a guide for subscribers on how to fill out the forms during the buyout process. This is how we ended up with BPR.

After the deal was approved, we purchased a large position again. This purchase went with the subscriber article: "CWMF: New Buy Rating for GGP". We paid a slightly higher price, but it was still low enough for us to be happy. After the transactions had settled, GGP announced that only shareholders who were holding prior to the vote would be able to choose BPR. Our new large position would not have BPR as an option. We found it interesting that the date for this change was announced retroactively.

These new shares of GGP were different from our original purchase because they would be limited to becoming BPY, rather than BPR. We sold shares of BPY shortly after they came into our account. We kept the tiny position in BPR until March of 2019. Following their strong rally, we decided to close out the tiny position.

One of our top alternatives is Taubman Centers. 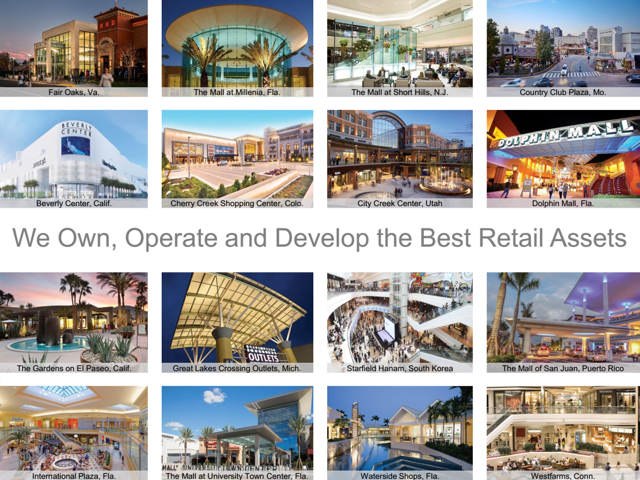 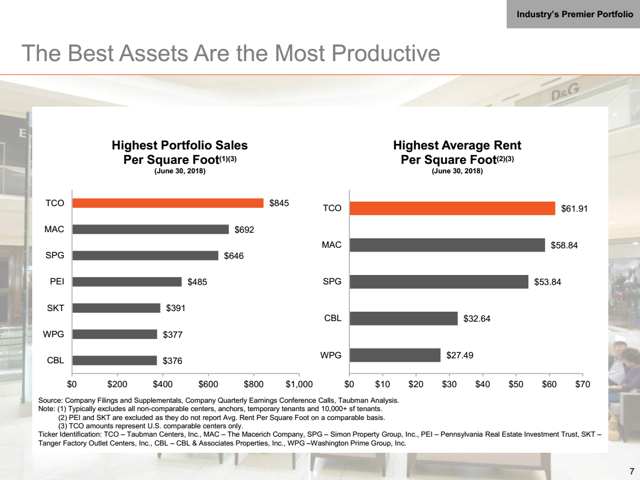 Taubman Centers has the best retail assets in the sector. 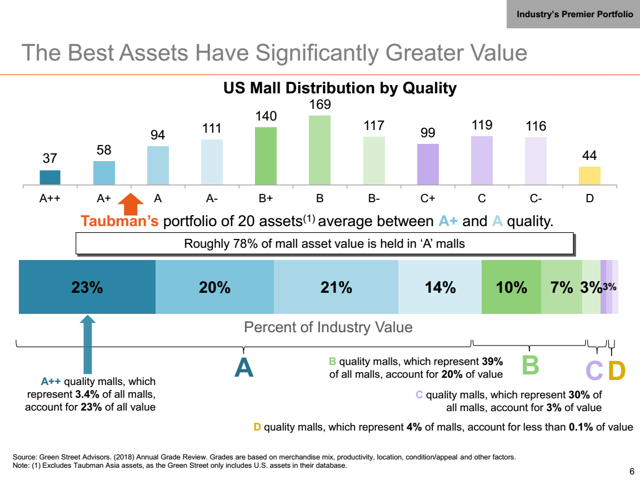 The emphasis on high-quality malls leads to much higher sales per square foot and rent per square foot. These metrics help to sustain the company's NOI and FFO growth. 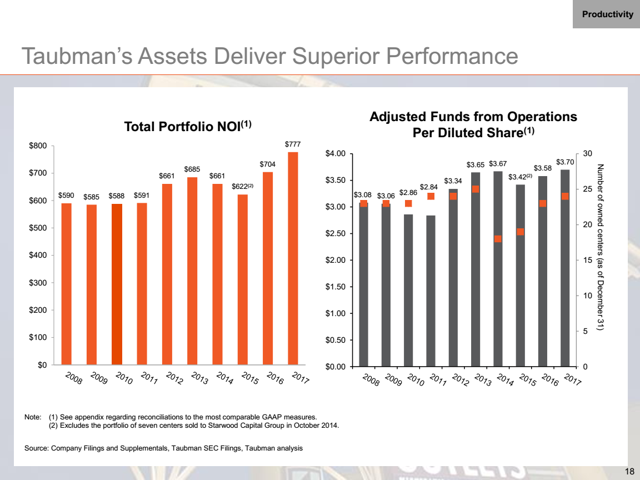 This is through having the best locations, best demographics, strong tenants, and high-quality anchors.

Why The FFO Metric Matters

Using FFO (Funds From Operations) is a very quick way to estimate the REITs "earnings". Using FFO multiples is a very reasonable part of the analysis, but investors need to adjust for quality. Properties that trade at very high capitalization rates usually have terrible growth profiles. A REIT acquiring a large volume of these properties would post high levels of NOI for the current periods with negative growth expected for future periods.

The answer isn't a simple yes/no. The answer depends on how much those properties are actually worth. If the property deserves to trade at a "7 cap" and management acquired it at a "10 cap", they were amazing investors. However, if a "10 cap" is the appropriate price, then management inflated FFO by taking on additional leverage. Inflating FFO through excessive leverage doesn't deserve a higher price, it simply deserves a lower multiple.

So, when are FFO multiples useful?

Any time the investor is comparing two similar REITs. If the assets are similar and the leverage is similar, then the FFO multiples can be a very useful tool for approximating values. For instance, two apartment REITs with similar risk ratings should often trade at similar FFO multiples. Yet our price targets are not simply assigning the same multiple to each similar REIT. Instead, we need to evaluate the location of the assets, the quality of management, and our expectations for future performance.

Currently, BPR is trading at about 13.8x trailing company FFO. TCO is trading at 14.3x our estimate of 2019 FFO. TCO has a materially stronger balance sheet compared to BPR.

We watch the mall REIT sector closely. We believe the abundance of negative stories relating to bankruptcies by retailers may be putting more pressure on the share price than the fundamentals warrant.

BPR was a great example of how investors can take advantage of knowing all the fundamentals. BPR was involved in a complex buyout deal. We were able to capitalize on that opportunity and come out with nice alpha.

Today, TCO is one of our top choices.