7 Stocks to Buy for June 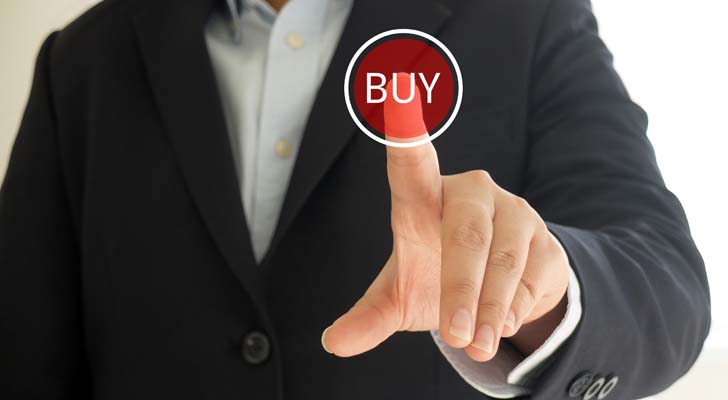 It’s not supposed to be a great month for stocks. Over the course of the past 70 years, June has lost ground about as often as it has gained ground, while the average performance for the S&P 500 for the coming month is actually a small loss. And, given the market’s May so far, following a red-hot start to the year, it looks like this June could prove particularly problematic.

It’s not a problem that applies to all tickers, however. There will be exceptions.

Some of those exceptions are rooted in new sector rotation, while others are the result of excessive selloffs we’ve seen take shape in recent weeks. Still, others are stocks that have simply been in unstoppable, steady uptrends that don’t appear ready to come to a close anytime soon.

Whatever the reason, add these seven names to your list of stocks to buy for your best shot at making forward progress in the coming month(s).

TerraForm Power (NASDAQ:TERP) is a utility-scale renewable energy producer. It owns more than 3,700 megawatts worth of wind and solar energy farms, mostly in the United States.

The hype surrounding renewables back in 2013 and 2014 was palpable, giving rise to the company as a publicly traded entity in July 2014, spun-off from troubled (and eventually bankrupt) parent SunEdison. 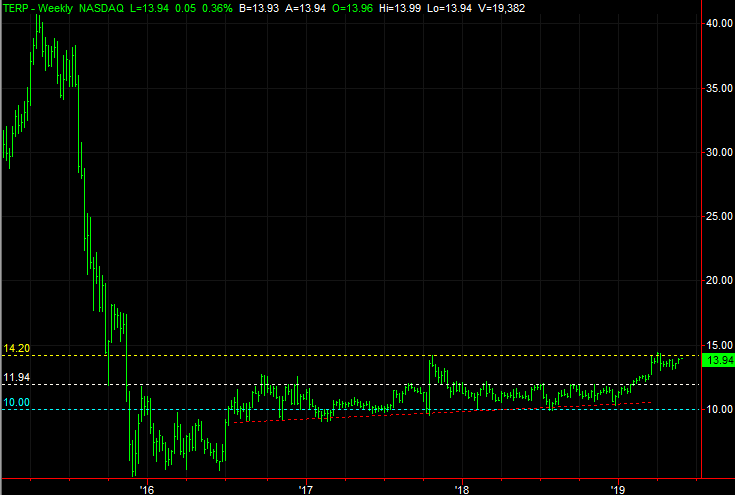 The timing, however, couldn’t have been more unfortunate. The buzz, as well as pricing power and its growth rate, peaked in mid-2015. By the end of that year, TERP stock had lost nearly 90% of its value. Most investors mentally wrote it off.

Big mistake. Although slow-going and inconsistent, TerraForm Power shares are fighting their way back. While stagnant for the bulk of 2018, the stock appears to be in breakout mode, punching past resistance around $12. There’s another ceiling around $14, but with next year’s expected revenue growth of 14% also expected to drive per-share earnings from $2.41 to $2.95, moving past that line in the sand could actually prove catalytic. The social and political tides once again favor the idea of renewables.

Boston Scientific (NYSE:BSX) makes a variety of medical devices, but it might be best known for its pacemakers, stents and a variety of catheters.

Given its diversity, the company’s revenue and earnings growth pace are impressive; most diverse organizations are so diverse they aren’t able to capitalize on any cyclical, product-specific tailwinds. Boston Scientific is an exception to this norm largely because a great number of its products are superior to its competitors. 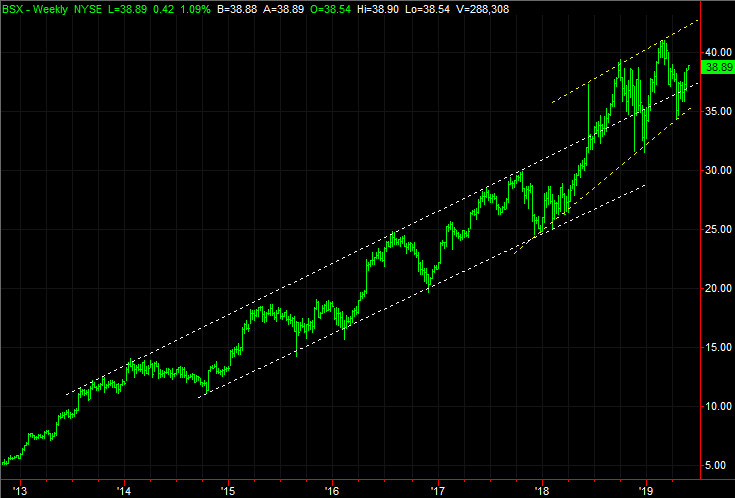 Numbers verify the idea. The company hasn’t failed to grow the top line in any quarter since the third quarter of 2015, with the weakest of those reports being last quarter’s still-solid 4.8% growth. Even that below-average quarter appears to be a one-off though. Analysts are still modeling sales growth of 8.2% this year, followed by a 9% increase next year. Earnings are apt to grow even more.

That’s a big part of the reason BSX stock has been such an impressive, even if choppy, performer since 2018. Its recent weakness simply brings it back to the lower edge of a long-term and rising trading range.

Village Super Market (NASDAQ:VLGEA) isn’t for everybody. With a market cap of right around $300 million, institutional investors may find it difficult to step into a position without moving the stock’s price higher, but even smaller retail investors might find trading volume is unusually light. Besides, aren’t Amazon.com(NASDAQ:AMZN) and Kroger (NYSE:KR) pushing other grocers out of the business? 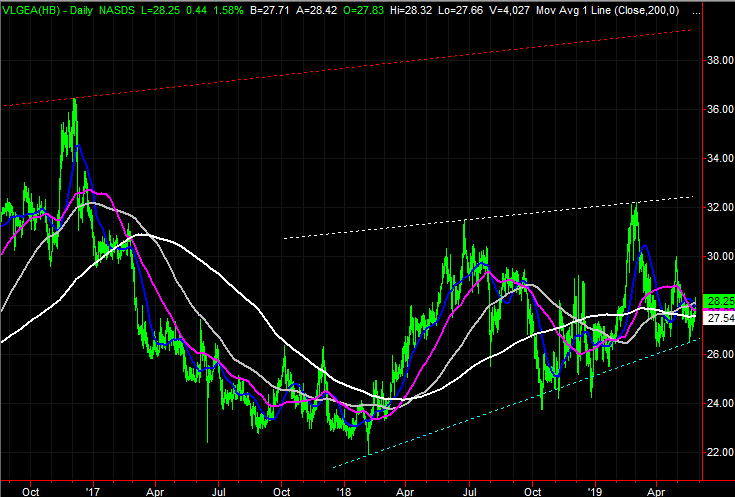 While it is true that the war between Kroger and Amazon is making matters tough for every other player in the grocery business, Village Super Market’s small size is its advantage. Its 29 ShopRite stores aren’t just grocery stores. Several of them have on-site registered dieticians, and many of its stores also operated an on-site culinary classroom, fitness studios and childcare centers. Yet, the company also offers online ordering, just like its biggest rivals do.

That hasn’t shielded VLGEA from some rather wild swings in recent years, but it has earned the company a spot on a list of stocks to buy sooner than later. Shares are just coming off of another higher low, and either of the most plausible ceilings are still miles above.

It’s arguably an unhealthy mindset, but people are obsessed with keeping stuff they rarely (if ever) use, or even see.

Enter Life Storage (NYSE:LSI) … a self-storage chain boasting more than 700 locations spanning 28 states. It’s organized as a real estate investment trust too, so it’s tax-advantaged and built to pay dividends. The current yield of 4.2% is above average for holdings with a similar risk profile, and better still, that dividend has been rising regularly since 2010 (though that growth has been plateauing lately). That may be a key part of the reason shares haven’t made any net progress since the middle of last year. 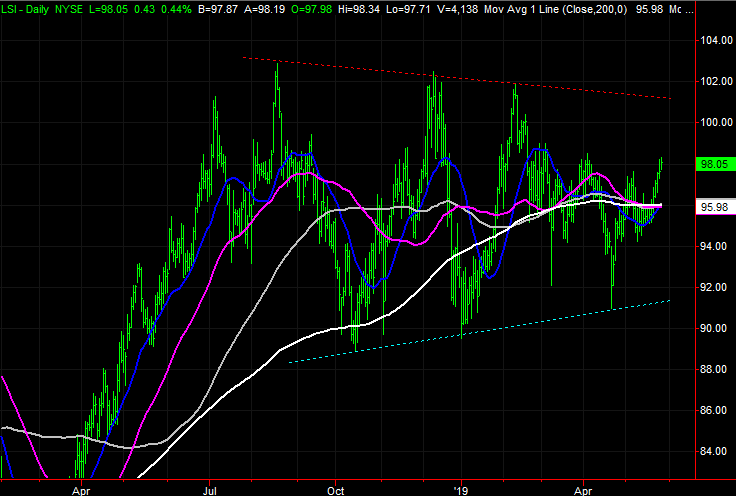 That could be about to change though.

Analysts are calling for “earnings” of $3.13 this year (REIT earnings aren’t necessarily earnings in the conventional sense) to improve to $3.21 next year. But, that outlook may not reflect the recent sale of new notes, which for the most part will be used for general corporate purposes that could include the purchase of new revenue-bearing and profit-driving properties.

The chart’s converging wedge pattern may actually trigger a breakout thrust once the market connects the dots.

Amphastar Pharmaceuticals(NASDAQ:AMPH) may be just barely profitable, but that’s about to change in a big way.

Driven by explosive revenue growth from several of its products including last quarter’s triple-digit revenue growth of thrombosis-prevention drug Enoxaparin, this small biopharma company is projected to improve its top line by nearly 24% next year. That should be enough grow this year’s projected earnings of 32 cents per share to a whopping $1 per share of AMPH stock in 2020. 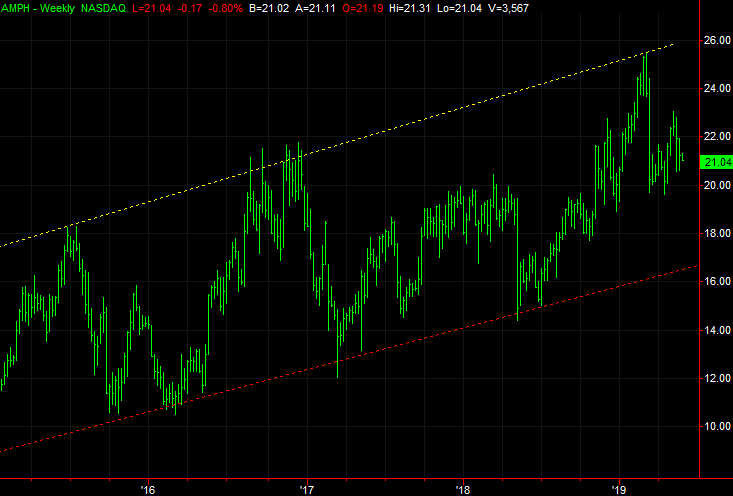 That’s not the only reason Amphastar is one of the top stocks to buy as we head into the latter half of 2019 though. It also has raw momentum, and it has repeatedly rewarded anyone who has bought into it on the dip like the one we’ve recently seen.

The latter half of last year was a miserable one for Zillow Group (NASDAQ:Z), and by extension, for owners of Z stock. Although real estate remained red hot through the first part of the year, a few too many red flags underscored by a couple of different disappointing quarterly reports torpedoed shares. All told, from peak to trough, Zillow Group shares lost 60% of their value. 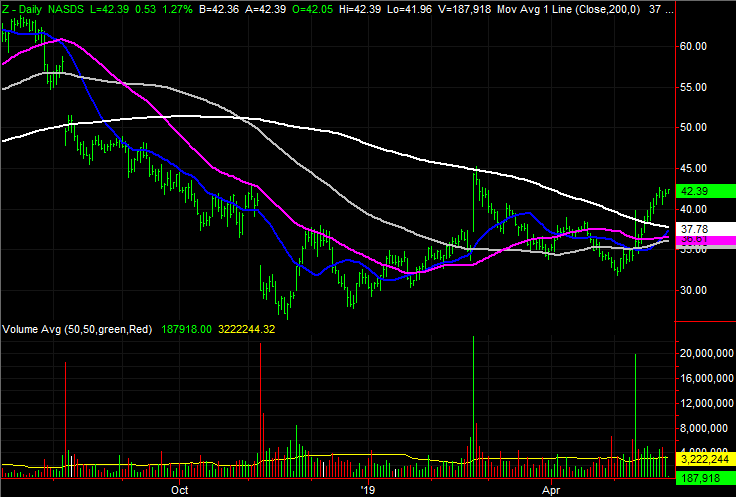 The rebound effort that has taken shape in the meantime, however, suggests traders realize they were a bit overzealous with their selling; the return of Rich Barton as CEO is helping lead them to that conclusion.

And that bounce is the real deal. After logging a higher low earlier this month, Zillow Group stock has crossed back above its pivotal 200-day moving average line, and has done so on higher volume … a key missing ingredient until just recently.

Cowen analyst Thomas Champion recently fanned those bullish flames too, upgrading Z stock to an “Outperform” in early April, touting the notion that Barton was the right guy to lead the company through its new house-flipping initiative.

Finally, add Kforce (NASDAQ:KFRC) to your list of stocks to buy before or at least in June.

Kforce is a staffing agency, although the term doesn’t quite do the company justice. Kforce is as much of a business partner and consultant as it is a supplier of bodies, specializing in meeting higher-level, more complex corporate needs. 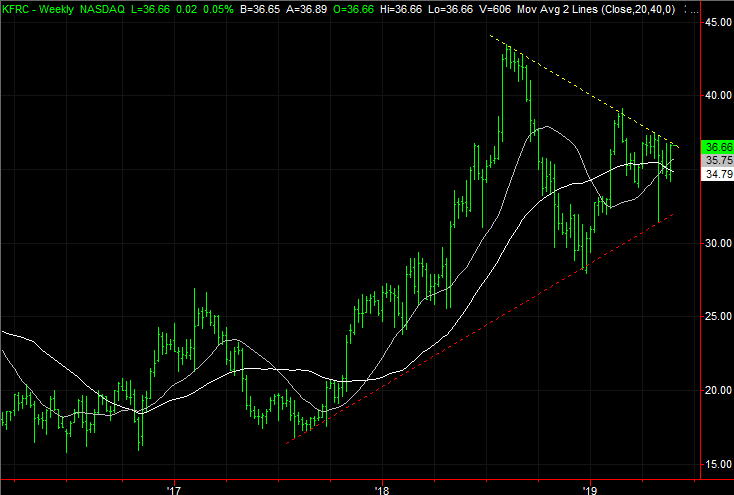 The permanent placement business is only getting bigger. But, where Kforce has a chance to truly shine in the foreseeable future is within the contract/temporary staffing arena.

Although it is nowhere on the horizon yet, more than a few corporations fear some sort of economic slowdown is in the offing. Rather than commit to a large workforce to capitalize on growth opportunities at hand, securing temporary (though indefinite) professional workers right now circumvents the risk and expense of being forced to lay off workers in the future. Alphabet (NASDAQ:GOOG, NASDAQ:GOOGL), for instance, currently employs more contract workers than conventional employees. Even though it leaves those workers in limbo, it plays right into the hand Kforce is holding.

That hasn’t necessarily meant lots of stability for KFRC stock, but when taking a step back and looking at the bigger picture, it becomes clear the longer-term tide is a bullish one.

Also clear is the fact that one more step forward will carry shares above a nagging resistance line that could incite a big wave of bullishness.