7 Stocks the Insiders Are Buying on Sale

A simple yet effective way to screen for stocks is to see if there has been insider buying.

Insiders are people who have access to confidential information about a company. Over the years there have been numerous examples of insiders using this information to gain an unfair advantage over uninformed investors. For example, an insider may know that some news is about to be released that will drive the stock price higher. They could take advantage of this information by buying shares from someone who isn’t in the loop.

The U.S. Securities and Exchange Commission has established many regulations that are meant to prevent this type of activity. One of them is the requirement that an insider must publicly disclose when they are buying or selling their company’s stock.

Because of this we can find profit opportunities. Insider buying could be a very bullish signal for a stock.

There are many reasons why a company insider may sell their stock. They could need to raise money for things such as paying a college tuition or a divorce settlement. Because of this, I usually don’t pay much attention to insider selling unless something seems unusual.

But as the legendary fund manager Peter Lynch said, there is only one reason why an insider would buy their stock. They believe that it is undervalued and that the price of the shares will rise.

Significant insider buying has recently occurred in the following stocks. 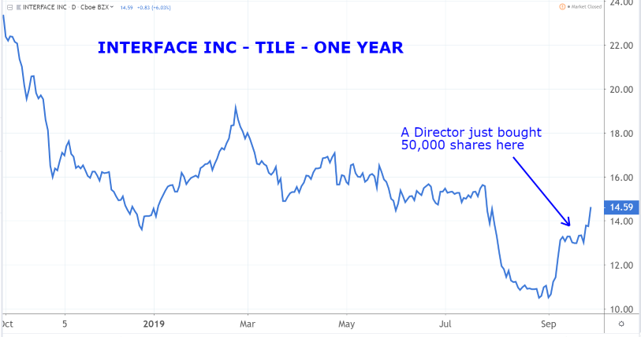 TILE stock was trading around $22 per share at this time last year. Since then it has lost about a third of its value. It is currently trading around $14.20. This could be due to concerns over the trade war and a possible recession.

Interface director Christopher Kennedy must believe that the stock is a bargain at these levels, because he just made a significant investment. He just bought 49,000 shares for an average price of about $13.74 a share. This was an investment of over $650,000. That is a real sign of confidence.

For the most part, Wall Street like this stock, but a few firms aren’t so confident. Out of the eight firms that cover Interface, four have it rated as a “buy” or “strong buy.” Three have it as a “hold” and one has an “underperform” on it. The average target price is $18.20, about 30% higher than where it is currently trading. 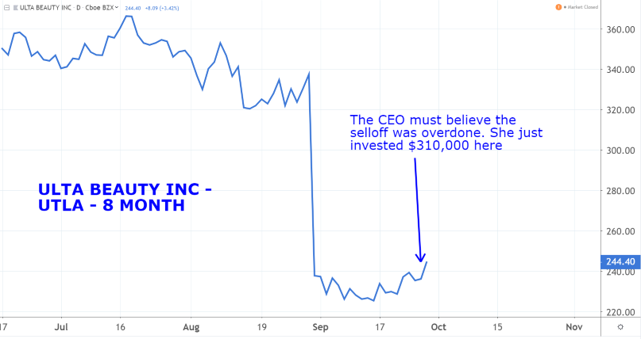 In late August, shares of ULTA dropped about 35% in one day. This is because the company cut its forecast for the full year and said that sales would be slowing down.

Mary Dillion is the CEO of Ulta. She must think that the selling was an overreaction because she just made a significant personal investment of over $300,000 into the stock. She bought 1,300 shares at an average price of $237.17 each.

Despite these concerns, Wall Street is still bullish on the prospects of the company. Over half of the 21 firms following Ulta have “buy” or “strong buy” recommendations. The average target price is about $291.71, which indicates over 10% upside from its current level. 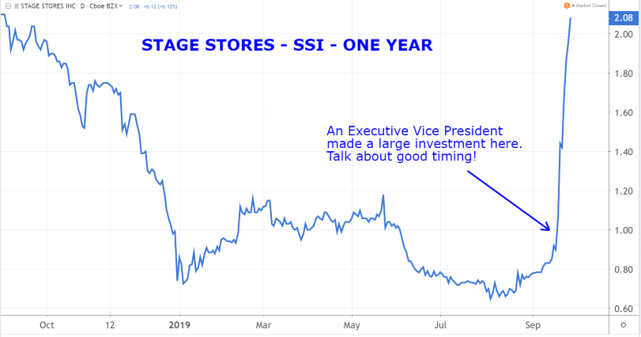 Stage Stores Vice President Thorsten Weber bought 229,500 shares at an average price of 99 cents. This was an investment of almost $230,000. Two days after his Sept. 19 transaction, the stock price more than doubled — doubling Weber’s investment.

Stage recently announced some store closings. One may be tempted to think that maybe this insider purchased shares ahead of the headlines, but this news actually came out two days before Weber made his purchase.

It could just be a case of great timing. 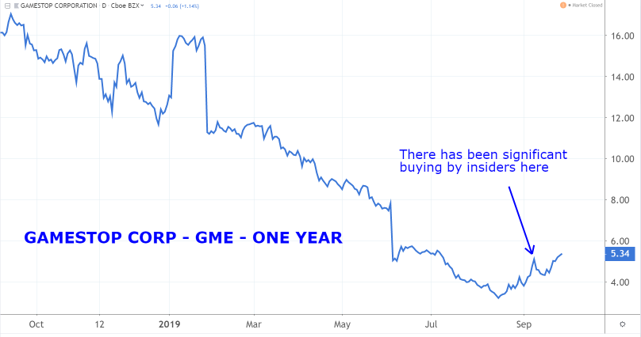 GameStop (NYSE:GME) is a video game and consumer electronics retailer.

Over the past year the price of GME stock has dropped from levels around $16 to as low as $3.25. It is currently trading around $5.50. Traditional brick-and-mortar retailers like GameStop have suffered due to the prevalence of online shopping.

Numerous insiders of the company must believe that the stock will come back because there has been a significant amount of insider buying.

Director Gerald Szczepanski just bought 40,000 shares at $5.04 a share, which is a $200,000 investment. Kathy Vrabeck and Carrie Teffner are also directors. They each just made investments of about $100,000 into the stock. At least two other directors purchased shares as well. 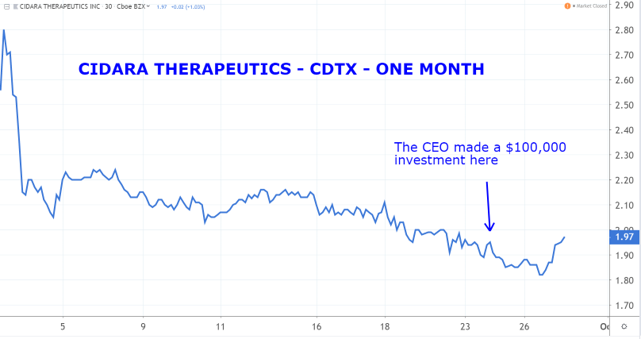 Cidara Therapeutics (NASDAQ:CDTX) is a biotech company that focuses on the development and commercialization of anti-infectives (drugs used to prevent infections).

CDTX stock rallied by 67% in early September when it announced a partnership with Mundipharma that could be worth as much as $568 million for Cidera. Since then the euphoria has worn off and the stock has trended lower over the past month.

Wall Street seems to agree that the shares are undervalued at current levels. Six firms follow CDTX stock. They all have “buy” ratings on it. The average target price is around $6.83 which is 240% higher than where it is currently trading. 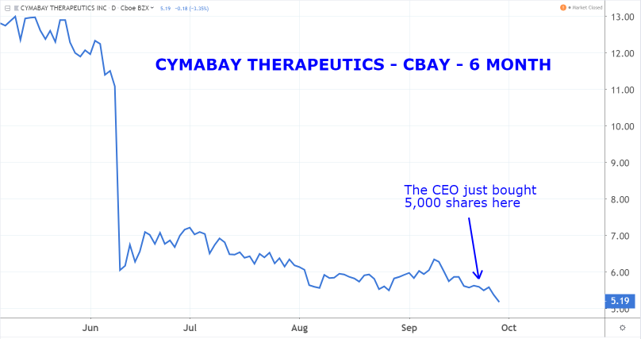 CymaBay Therapeutics (NASDAQ:CBAY) is a clinical stage biopharmaceutical company that focuses on developing and providing therapies to treat liver disease and other chronic illnesses.

In June, CymaBay lost over 50% of its value in just one day when it reported disappointing data regarding one of its drug trials. The company seemed to believe that the results weren’t that bad, but obviously shareholders disagreed. There has been no recovery since then and shares have trended lower.

Wall Street loves CymaBay. The average target price is $16.09, which is more than triple the current CBAY stock price.

CEO Sujal Shah also feels that the stock is undervalued at current levels. Shah just bought 5,000 shares at an average price of $5.53 a share. 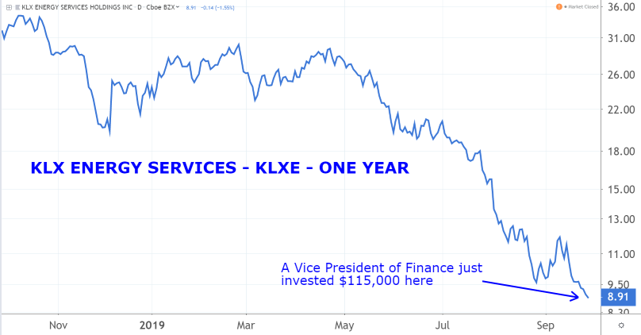 Like many other companies in this industry, shares of KLXE have not performed well over the past year. After trading at highs around $35, KLXE is currently trading for less than $9 per share.

Vice President of Finance Heather Floyd must believe that the stock is about to turn around because she just made a $115,000 investment when she paid $9.20 a share for 12,455 shares.

Director Theodore Weise also believes that the stock is an attractive investment at current levels. Weise invested approximately $30,000 when he bought 3,000 shares at $9.50 per share.