Shares of Aurora Cannabis fell on Tuesday after END_OF_DOCUMENT_TOKEN_TO_BE_REPLACED

In a report released today, Oren Livnat from END_OF_DOCUMENT_TOKEN_TO_BE_REPLACED

7 Stocks That Insiders Are Buying 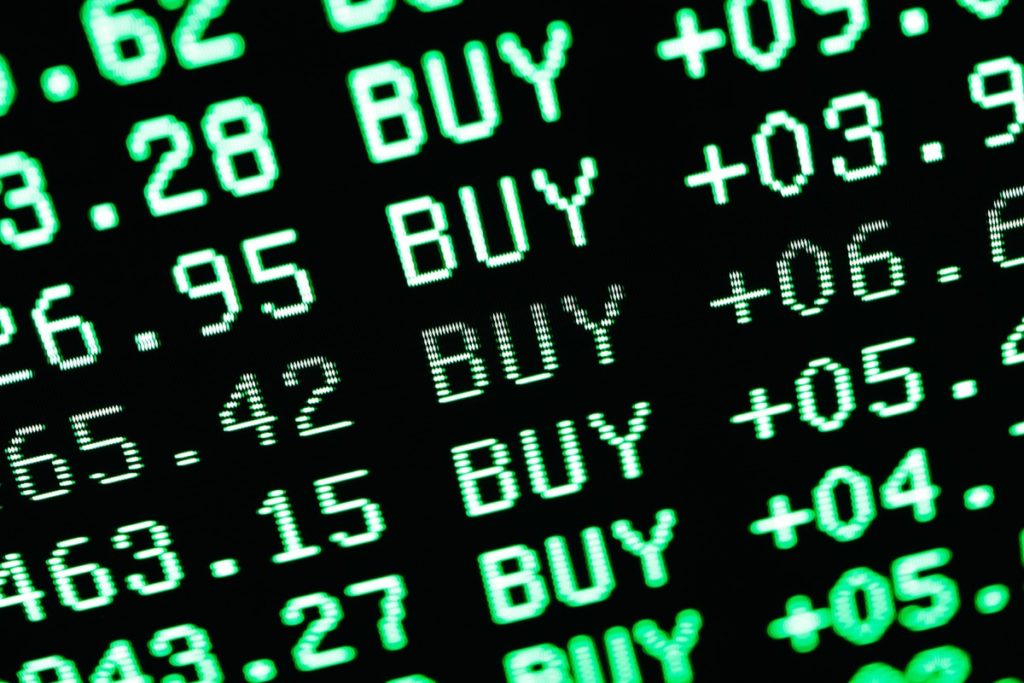 Over the years, there have been numerous instances of where insiders, or people in a company who have access to confidential information, have used this information in order to profit. For example, suppose that the CEO of a company knows that it is about to report earnings that are better than estimated. The CEO believes that the stock will rise when the earnings are reported, so he or she buys it before the release.

If they know earnings will be a negative surprise, they may go ahead and sell their stock before the price falls. The CEO is using information that the public doesn’t have access to in order to make their decision, and that is illegal.

Fortunately, there have been many laws enacted and regulations placed that prevent this type of activity. For example, if an insider of a company purchases their company’s stock, they must file their actions with the SEC.

Basically, the insider has to tell the public when they buy their company stock. Believe it or not, these filings could help us find profitable investment opportunities.

There are many reasons why an insider of a company may be compelled to sell their company’s stock. For instance, they may need money for things such as mortgages, divorce settlements or home improvements. But they buy their company’s stock for one and only one reason — they believe that they will make money! Insider buying could be a major buy signal that you could profit from.

The following stocks caught my attention due to the significant insider buying that has occurred recently. 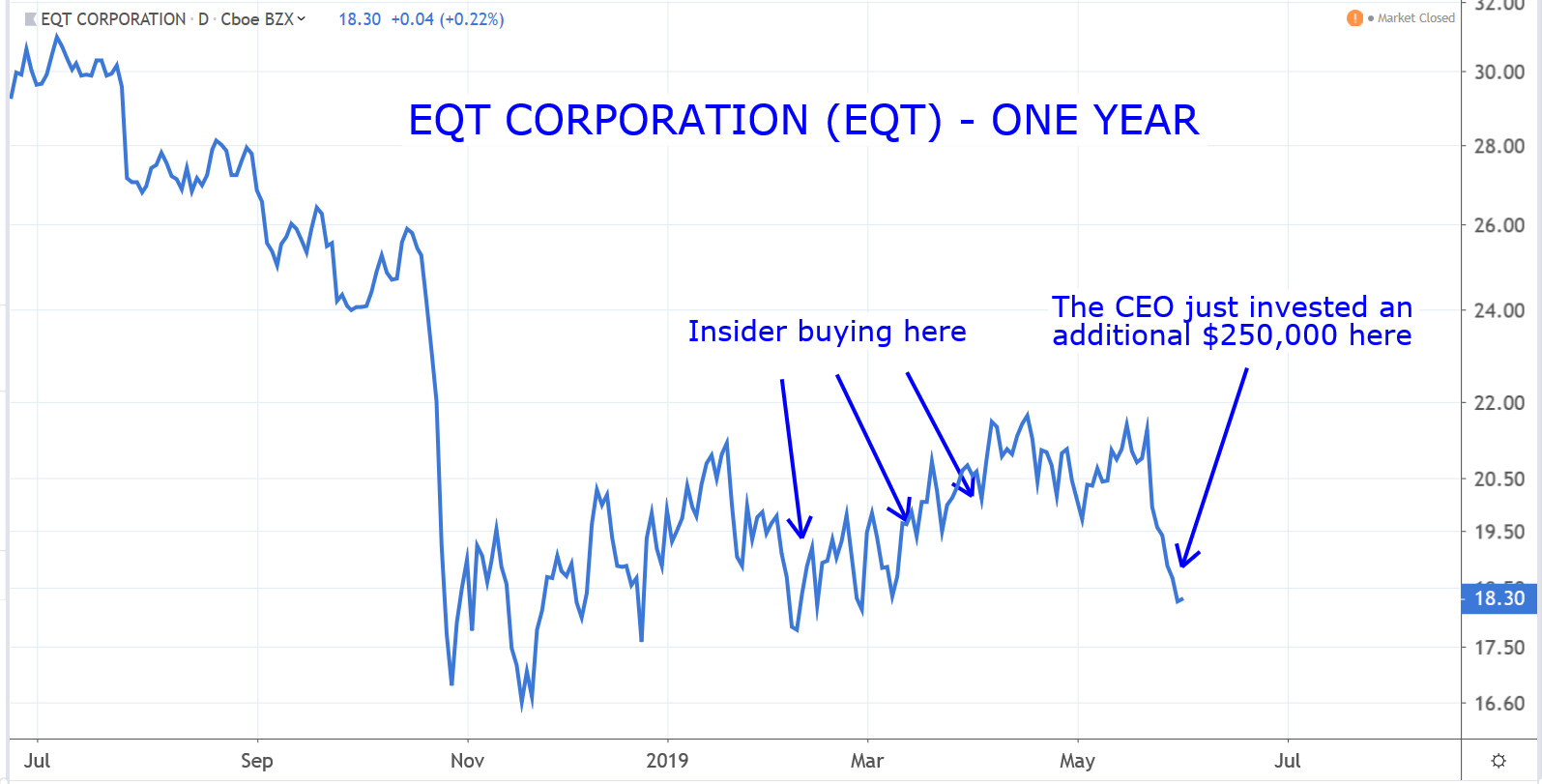 EQT (NYSE:EQT), based in Pittsburg, is in the natural gas business. The 130-year-old business engages in the production and transmission of natural gas in the Application area.The price or EQT has dropped by 50% in less than a year. Maybe that is why there has been significant insider buying recently.

Robert McNally is the president and CEO of EQT. He just invested $250,000 into the company’s stock. This is in addition to the significant purchase that he made in March, spending over $260,000.

There has also been significant buying by some other insiders as well. In February, Executive Vice President Donald Jenkins bought 5,700 shares at $19.46 and the senior vice president of Human resources, Dave Smith, bought 17,000 shares at $19.06.

This company is widely followed by Wall Street, as 18 firms cover it. There are 11 buy ratings and 7 holds. The average target price is $25 per share. 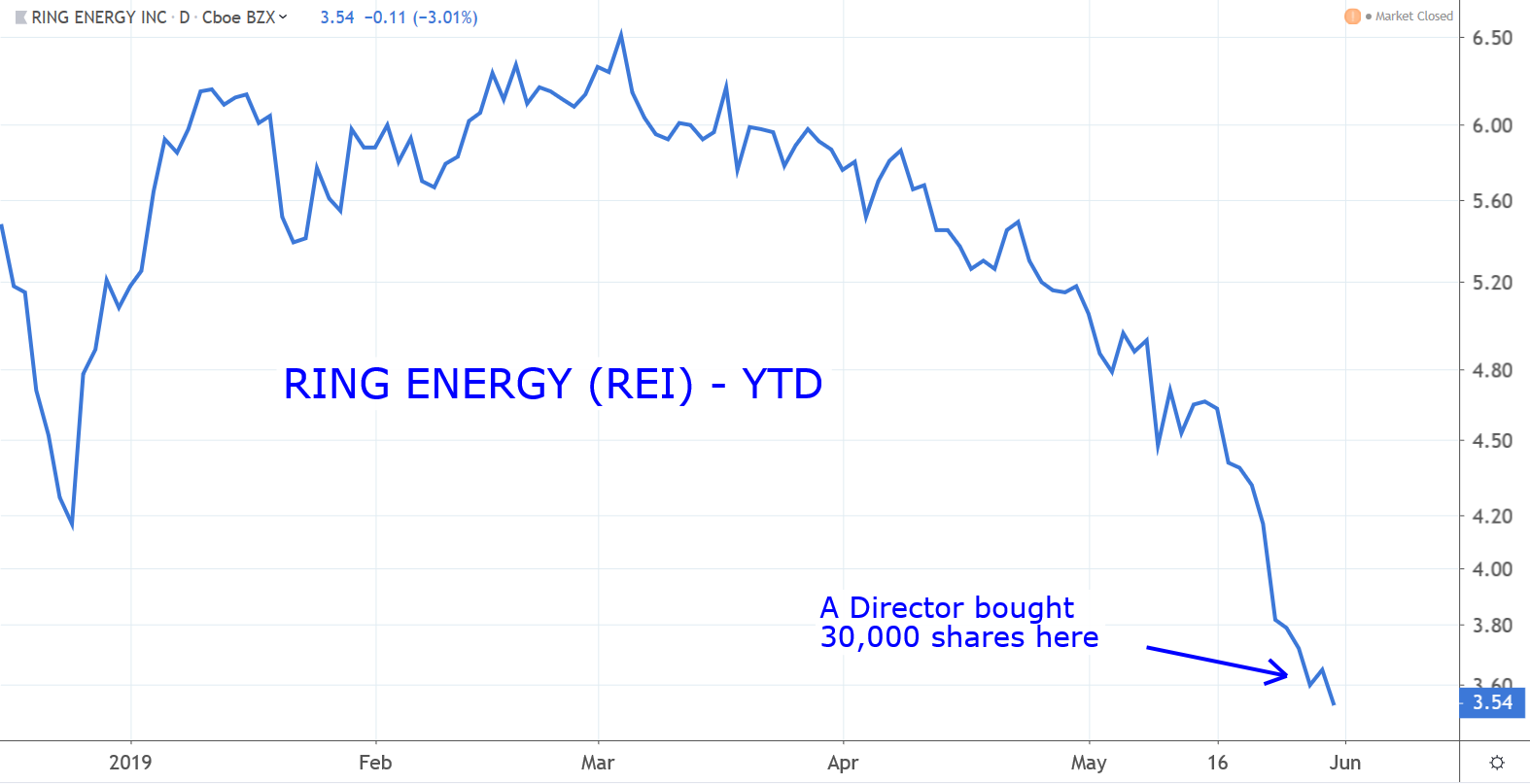 Ring Energy (NYSEAMERICAN:REI) is in the oil and natural gas business. It acquire companies in these industries and engages in exploration, development and production activities. With a market capitalization of about $230 million, it is a small-cap stock.

The stock of Ring Energy has not performed well this year. The stock has fallen almost 50% since just this past March.

Anthony Petrelli is a director of Ring Energy. He must believe that the stock is cheap at these prices, because he just invested almost $115,000 of his own money in it. He purchased 30,000 shares at a price of $3.80 per share on May 28.

Wall Street also apparently feels that the stock is currently undervalued. Ten firms cover it and call it a buy. The average price target is $9.27, which is almost triple the level where it is currently trading. 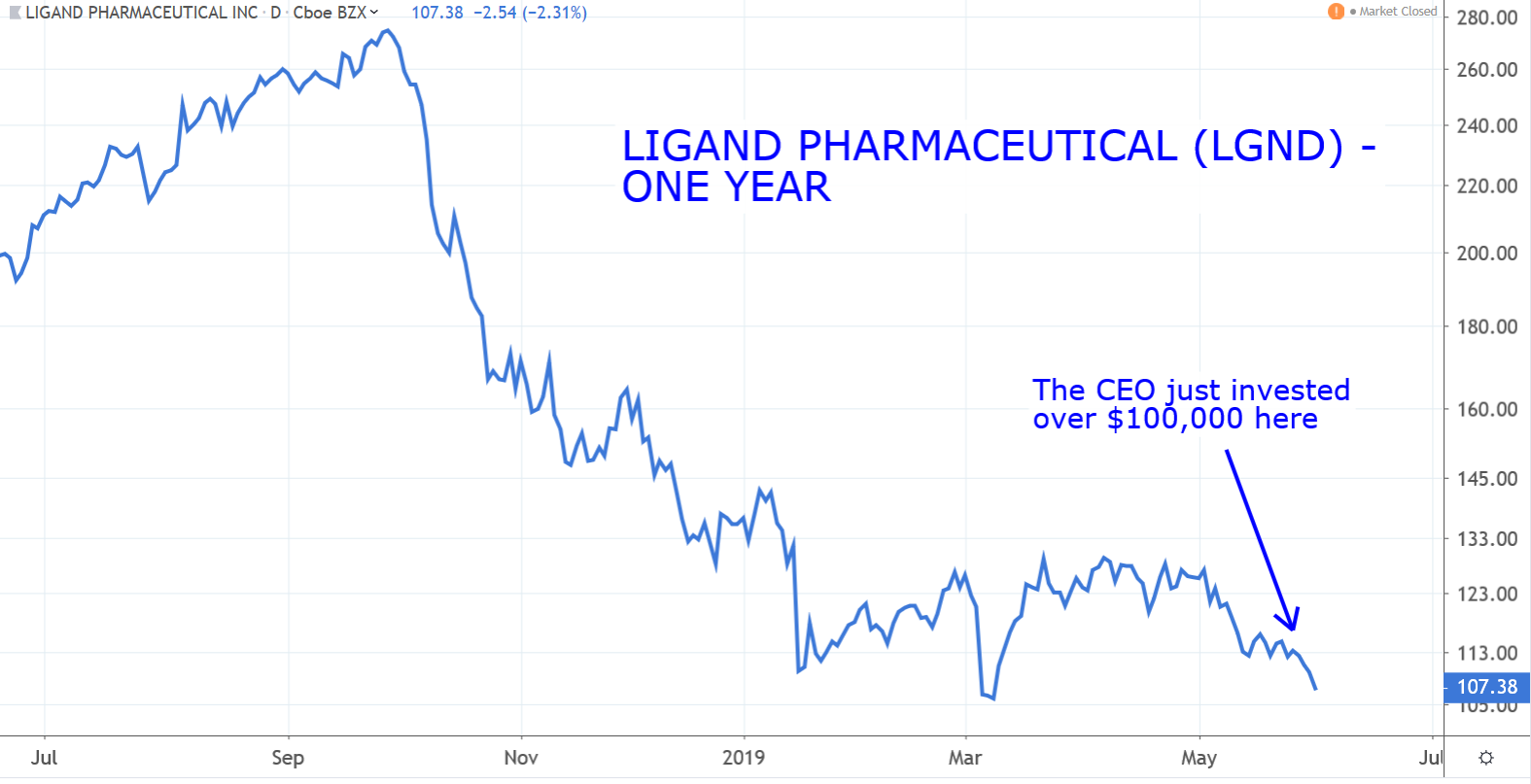 Ligand Pharmaceuticals (NASDAQ:LGND) is a biotechnology company. It develops or acquires technologies that help other pharmaceutical companies discover and create new medicines. The company is based in California and it currently has a market capitalization of just over $2 billion.

The stock of Ligand has essentially collapsed since September. Back then it was trading for around $280 per share. The most recent close was $109.88.

John Higgins is the CEO of Ligand. He has been with the company for 12 years. Maybe he is sick and tired of watching the stock fall. Whatever the reason, he just made $108,000 investment when he paid about $108 for 1,000 shares.

Wall Street apparently loves this company. Five firms follow it and they all have buy ratings on it. The average price target is $202. If the stock did get back to this level it will have doubled in price. 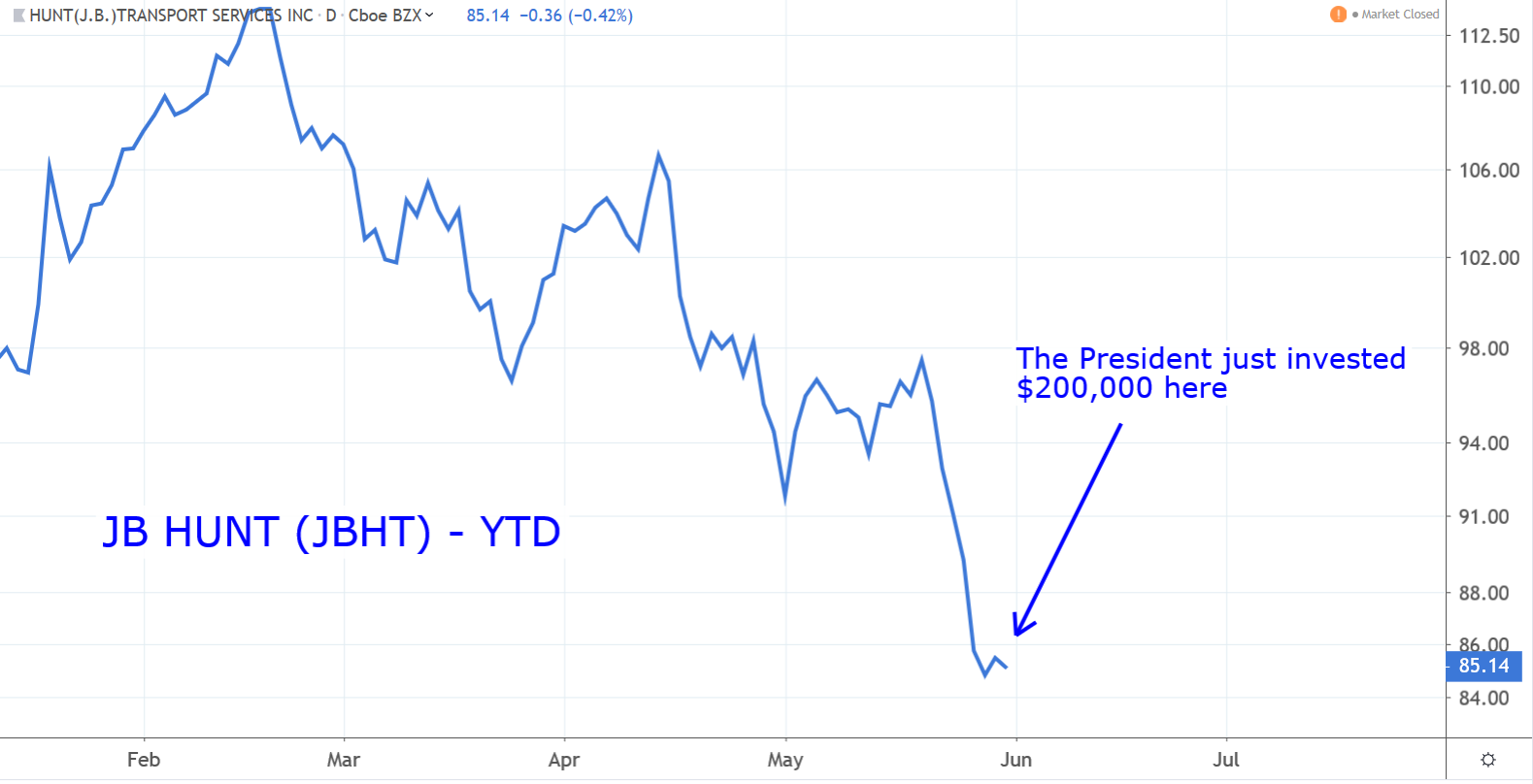 J. B. Hunt Transportation Services (NASDAQ:JBHT) provides logistical solutions. In other words, it is a trucking company. You have probably seen some of their trucks on your local highway.

JBHT has fallen about 20% this year. This may be due to the company’s difficulty in finding an adequate number of truck drivers.

John Roberts apparently thinks that the recent selloff is overdone and that the stock is a bargain at these levels. Mr. Roberts is the president and CEO of the company, and he just invested $200,000 of his own money when he paid $86.23 for 2,300 shares. In addition, early this month Gary George, a director of the company, bought 7,500 shares. That was a $700,000 investment.

This company is widely followed by The Street. Right now, 22 companies follow it. The average rating is an overweight and the average price target is $110. 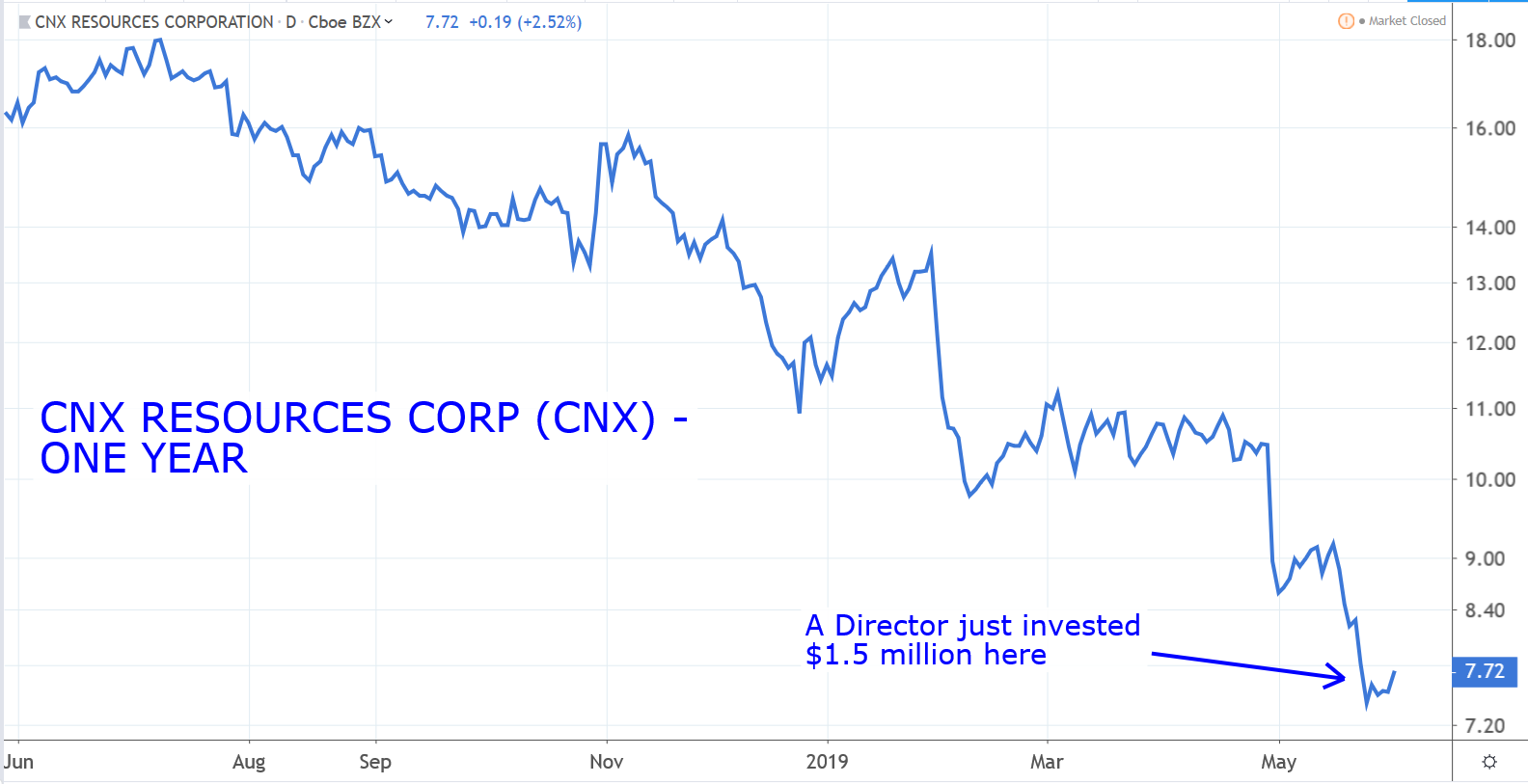 CNX Resources (NYSE:CNX) is in the oil and gas industry. The company is involved in the exploration, development and production of natural gas and operates in the Appalachian Basin. CNX is an old company, being founded in 1864. The current market cap is $1.4 billion.

The stock of CNX has not performed well recently. It has fallen about 60% over the past year. Value investors may want to take a look at this one. The current price-to-earnings ratio is only 7.9.

Bernard Lanigan is a director of CNX. He must feel pretty good about the company’s prospects because he just bought 198,000 shares at a price of $7.56. That is a $1.5 million investment! And he’s bought more since.

Wall Street is lukewarm on this one. Twelve firms follow it and the average rating is a hold. 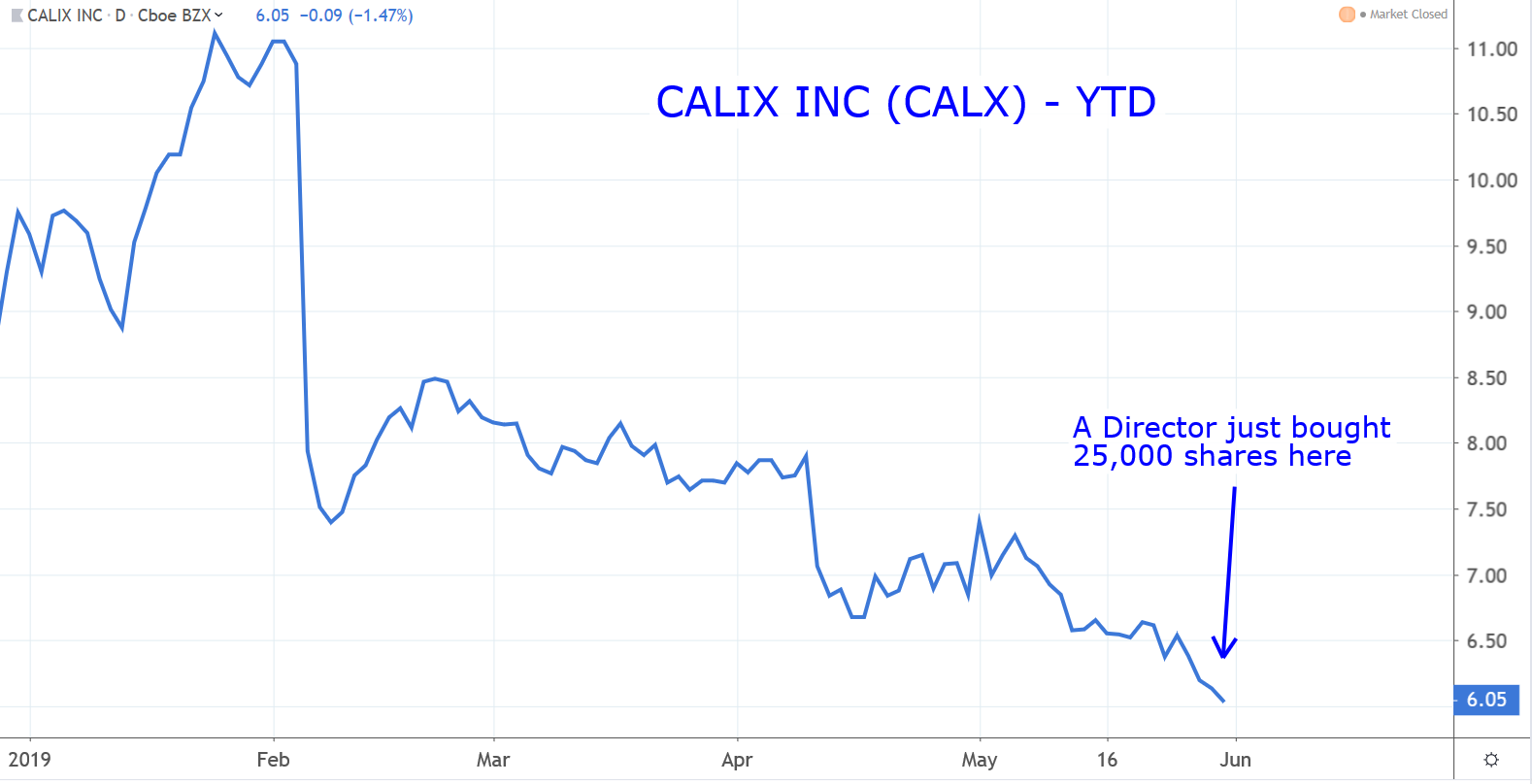 Calix (NYSE:CALX) is based in San Jose, California. It provides broadband communications access systems and software. The company also develops and sells hardware and other software. With a market cap of $330 million, it is a small-cap company.

Shareholders of this company have not been too happy with its performance. The stock price of CALX has fallen by almost 60% since February.

Daniel Plants is a director with the company. He must believe that the stock is a value at these levels because he paid $6.21 for 25,000 shares. This is a personal investment of almost $160,000.

Wall Street is mediocre on this stock. Six firms follow it and the average rating is a hold, while the average price target is $10.75. That is 60% higher then where it is currently trading. 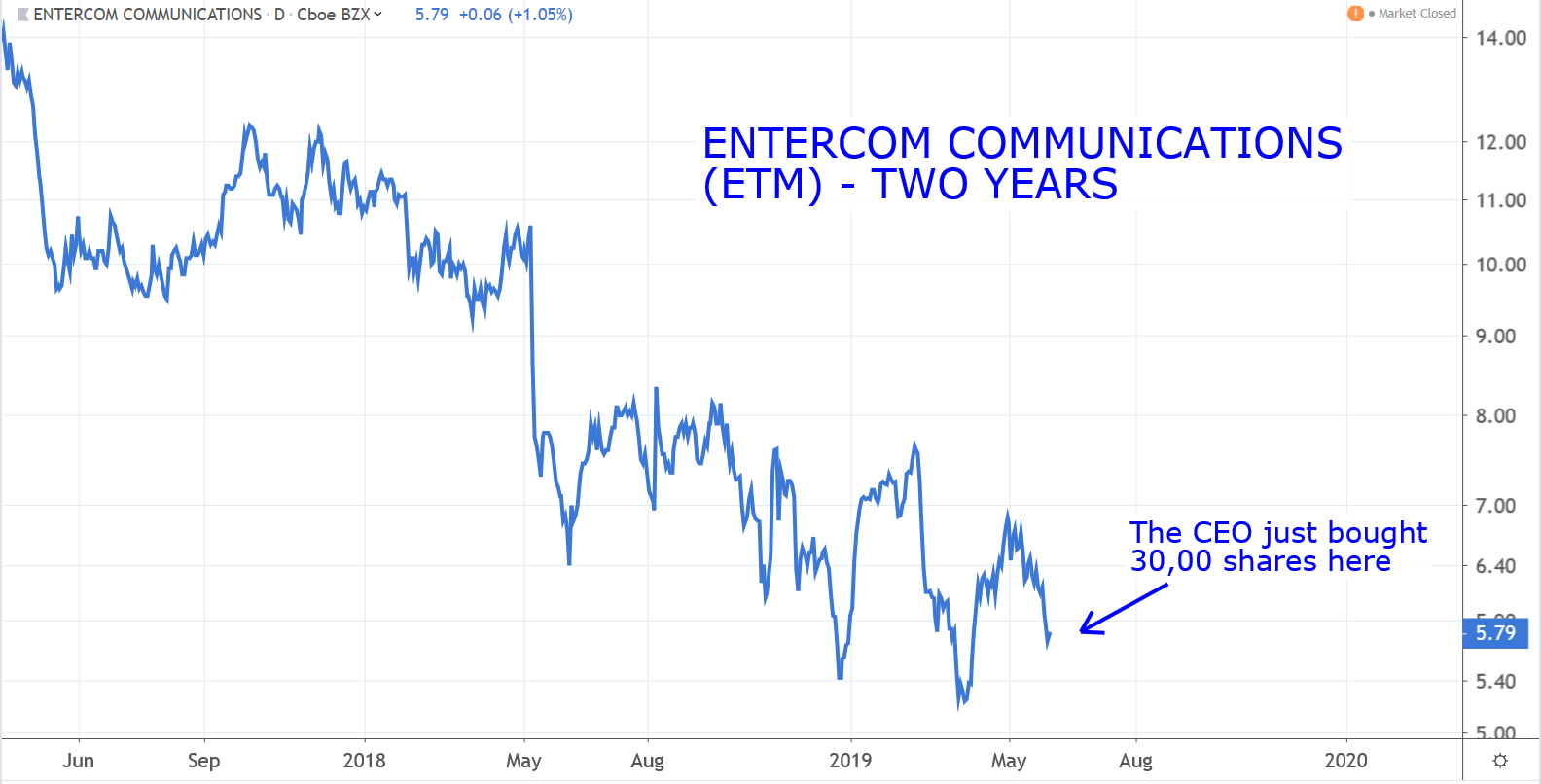 Entercom Communications (NYSE:ETM) is a radio broadcasting company that owns radio stations in various markets across the country. After years of profitably, ETM posted a large loss in 2018.

Two years ago, ETM traded for around $14 per share. Its most recent close was $5.94. In addition, over the past month it dropped by about 20%.

David Field appears to be the ultimate insider. He in the chairman, president and CEO of the company. Someone with such an extensive title must have some great insight. Mr. Field just invested about $175,000 of his own money when he paid around $5.85 for 30,000 shares. He must think that the company is undervalued at current levels.

Wall Street is apparently a fan of ETM. Three firms follow it and two of them have a buy rating on it. The average target price is $8.13, about 20% higher than the most recent close.