Market volatility is up in recent sessions, and END_OF_DOCUMENT_TOKEN_TO_BE_REPLACED

As tech takes a tumble this week, there END_OF_DOCUMENT_TOKEN_TO_BE_REPLACED

7 Stocks on Sale the Insiders Are Buying 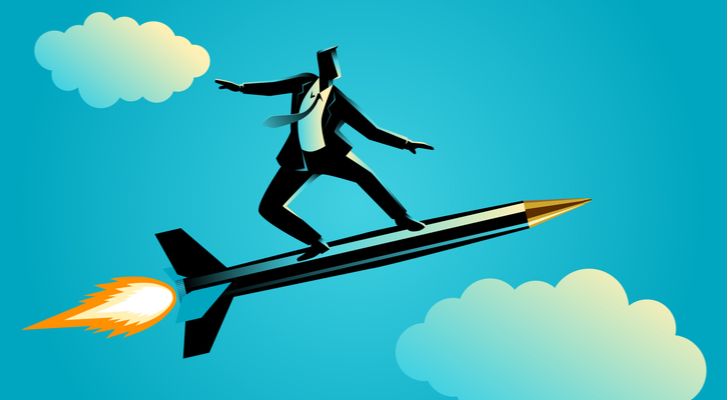 You probably know that insider trading is illegal. An insider is an individual who has access to confidential information about a company. This information can be used to gain an unfair advantage over others in making trading or investing decisions. For instance, suppose an insider knows that a company is about to announce earnings that are dramatically lower than Wall Street estimates. The insider could use this knowledge to profit. They could sell short the stock or buy puts before the release is made public.

The U.S. Securities and Exchange Commission (SEC) has implemented laws and regulations to prevent this type of activity. One of the things that an insider must do is to inform the SEC if they buy or sell their company’s stock. This is fortunate for us ‘outsiders’ because it could give insight into the future performance of the company.

There are numerous reasons why an insider may sell their stock. They may need to money to pay tuition or to buy a home. But there is only one reason why an insider would buy their company’s stock. That is because they believe that it will go higher and they will make money!

The following seven companies have seen their stock prices fall dramatically. Apparently, the insiders at these companies believe that these selloffs are coming to an end because they have been buying.

Guess? Inc. (NYSE:GES) designs and sells clothes for men, women, and children. They say their apparel reflects the ‘American lifestyle and European sensibilities.’ The company sells its products throughout the Americas, Europe, and the Middle East. 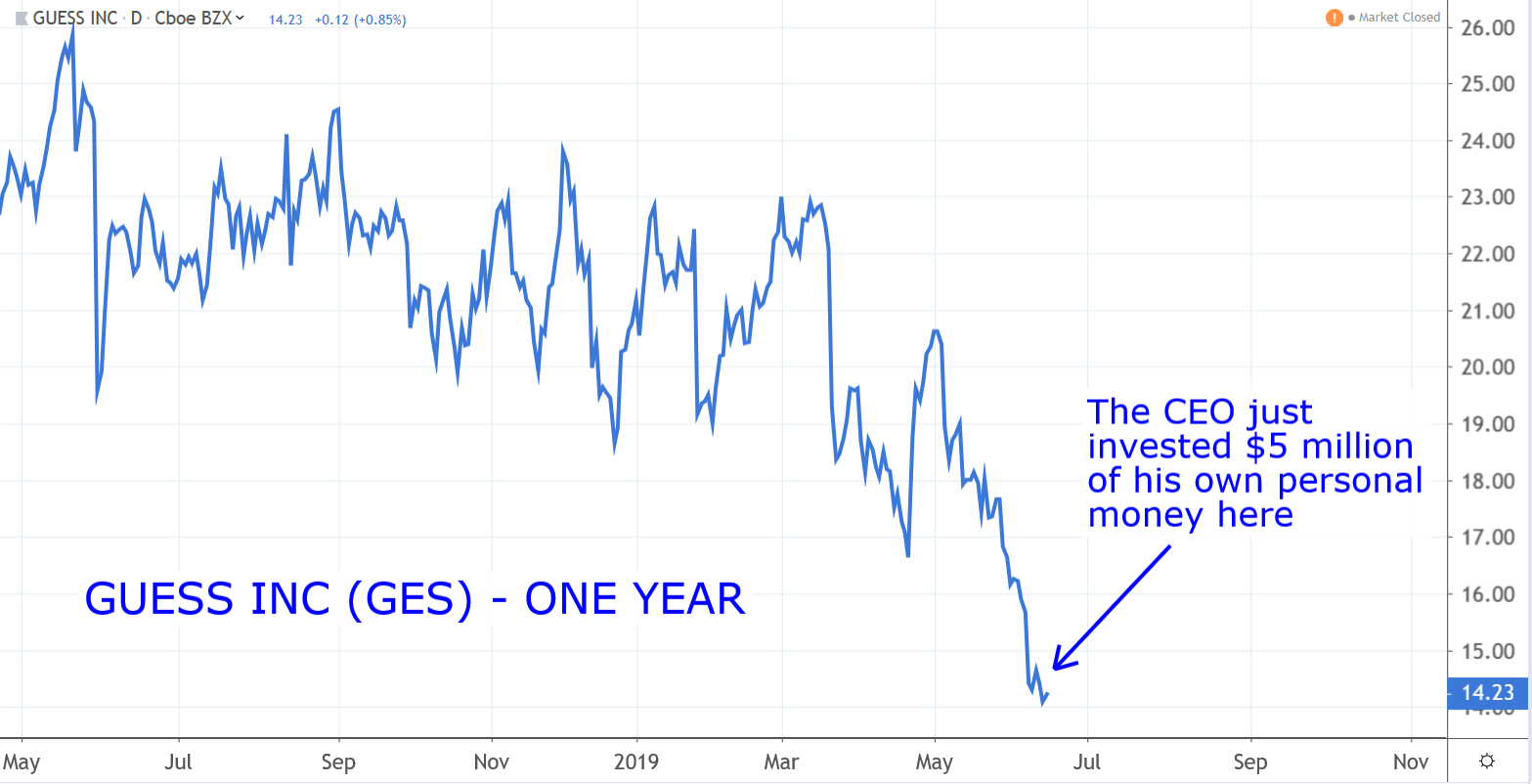 The stock of GES has fallen dramatically. Over the past year it has lost almost 50% of it’s value. Some analysts attribute this to the trade wars because Guess manufactures some of its clothes in China.

Carlos Alberini is the CEO of Guess. Apparently he must believe that the stock is a bargain at these prices because he just paid $14.32 for 348,000 shares. That is a $5 million investment!

Wall Street is bullish on GES as well. It is followed by five companies. The average rating is “overweight” and the average price target is $22.50. This is about 50% higher than current levels.

Occidental Petroleum Corp. (NYSE:OXY) is engaged in the exploration and production of natural gas. The company has three segments: Oil and Gas, Chemical, and Midstream and Marketing. It is 100 years old and is based in Houston. 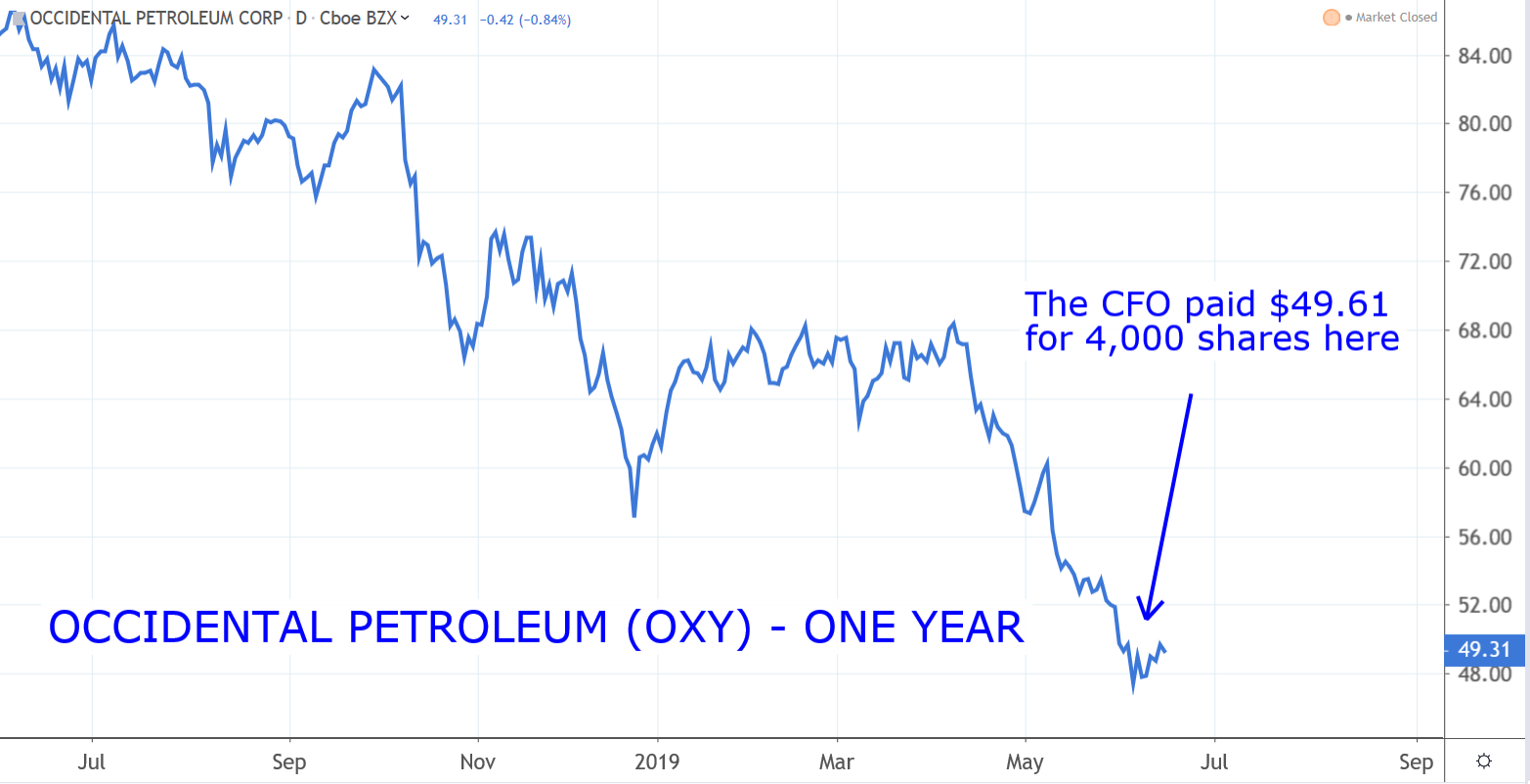 Over the past year the price of OXY has dropped from $84 to $50. As a matter of fact, the stock is trading at it’s lowest levels in a decade.

There has been significant insider buying recently. The CFO just bought 4,000 shares and the CEO just bought 37,000 shares. Two Senior Vice Presidents just bought a total of 20,000 shares between them. In addition, a few Directors purchased shares last week as well.

OXY is covered by 21 firms. They seem to be pretty neutral on the future prospects of the company. The average rating is a “hold.” It is 100 years old and is based in Houston. 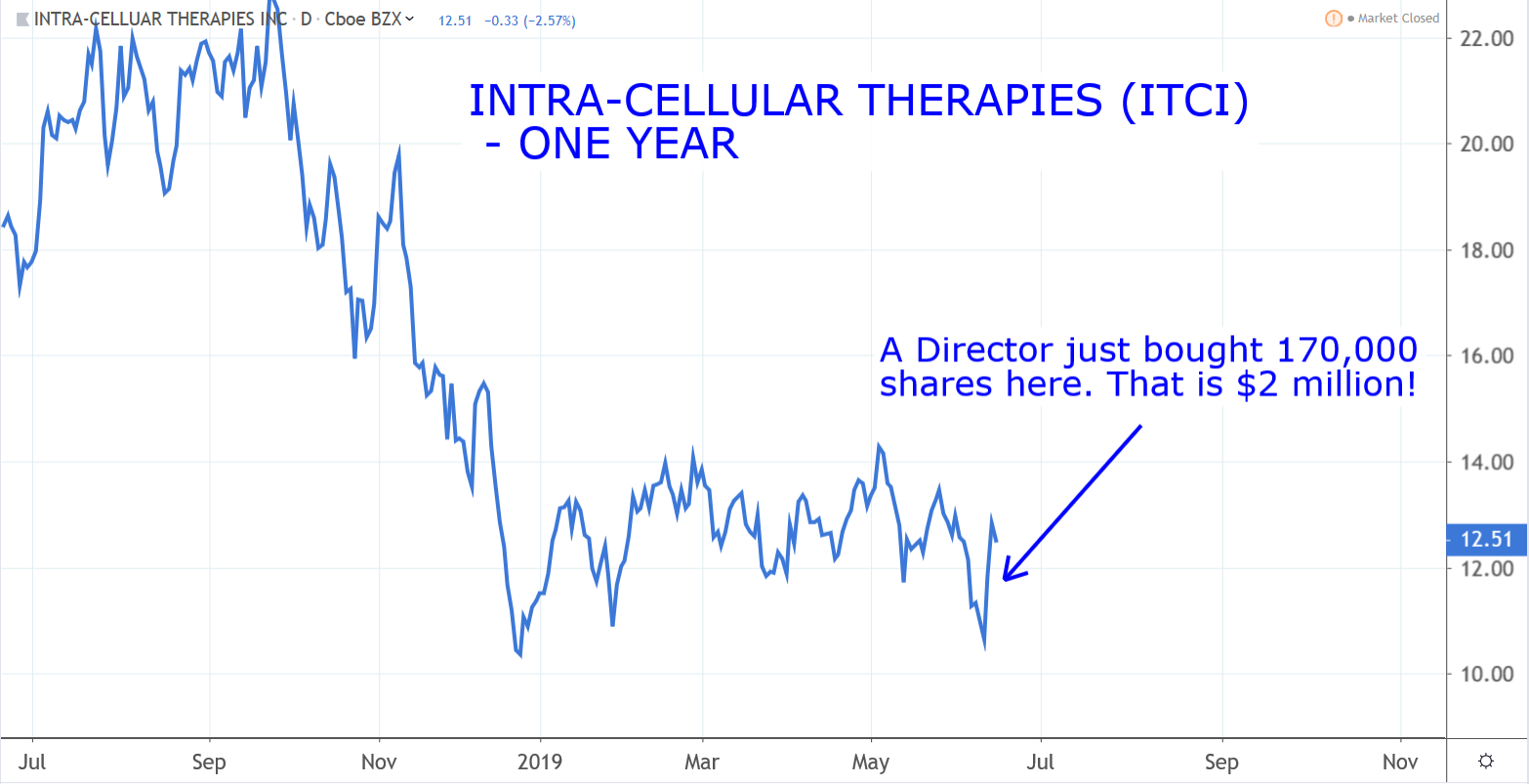 Shareholders of ITCI probably aren’t too happy. The price the stock has fallen about 50% over the past year. Some analysts believe that this is because some large hedge funds have been selling their positions.

Christopher Alafi is a Director of ITCI. He must believe that the stock is a great buy at these levels because he just paid $11.73 for 170,000 shares. That is a personal investment of almost $2 million!

Wall Street loves this stock. Nine firms follow it and they all have it rated as a “buy.” The average target price is $29 which is more than 100% higher than current levels. 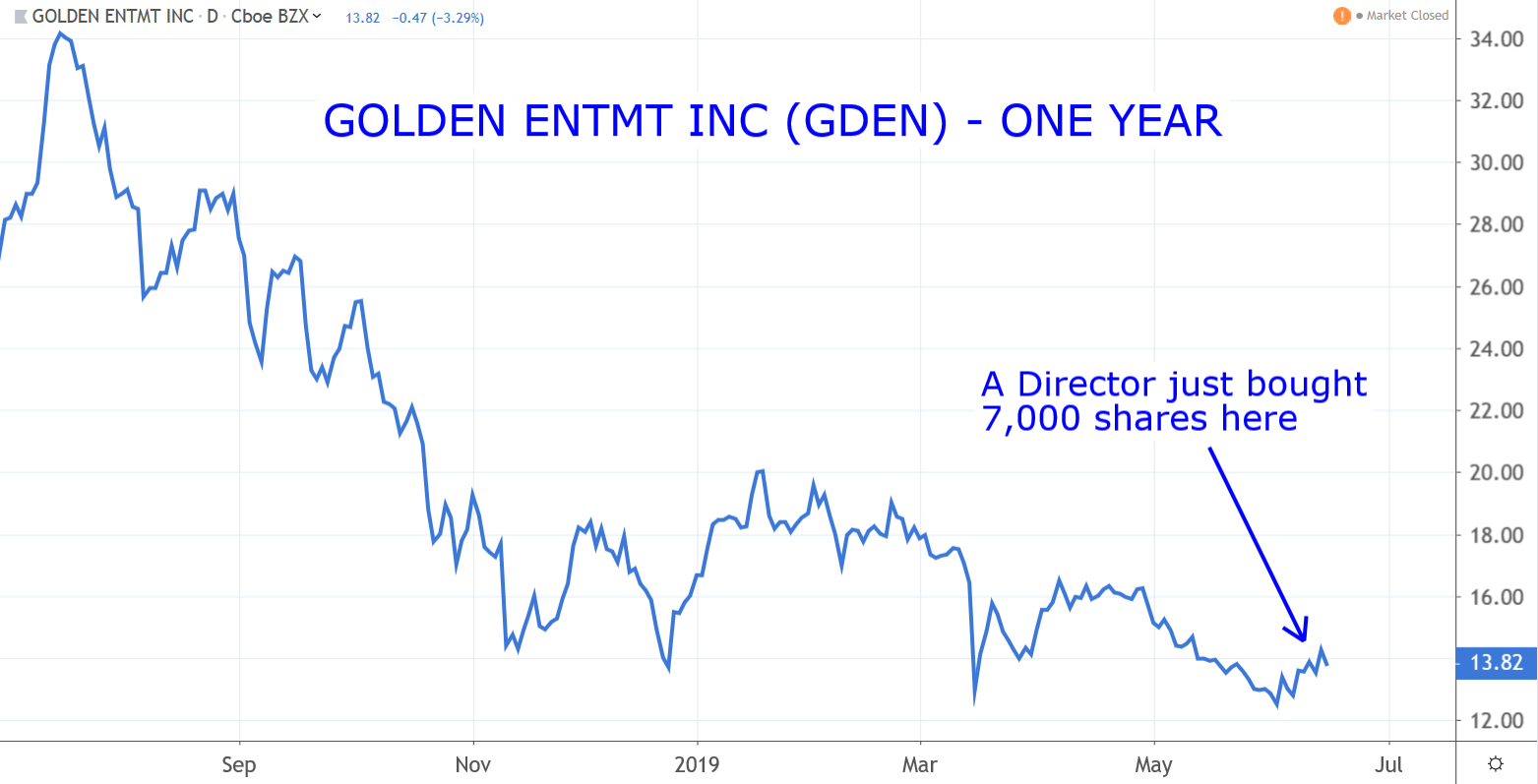 Needless to say, shareholders of GDEN have not been too entertained. However, the short sellers have been enjoying it because the stock has dropped by about 50% over the past year.

Anthony Marnell is a Director of Golden Entertainment. Mr. Marnell must think that the selling is about to come to an end because he is ‘rolling the dice.’ He just bought 7,000 shares at a price of $13.33. This is an investment of almost $100,000.

Wall Street loves this stock as well. Five firms follow it and they all have it rated as a “buy.” The average target price is $22 which is about 33% higher than current levels.

Sharps Compliance Corp. (NASDAQ:SMED) provides waste management services. This is not your local garbageman. SMED disposes of medical, pharmaceutical, and hazardous materials. Next time you are at the Doctor and see one of those Bio-Medical Waste disposal boxes, remember SMED. 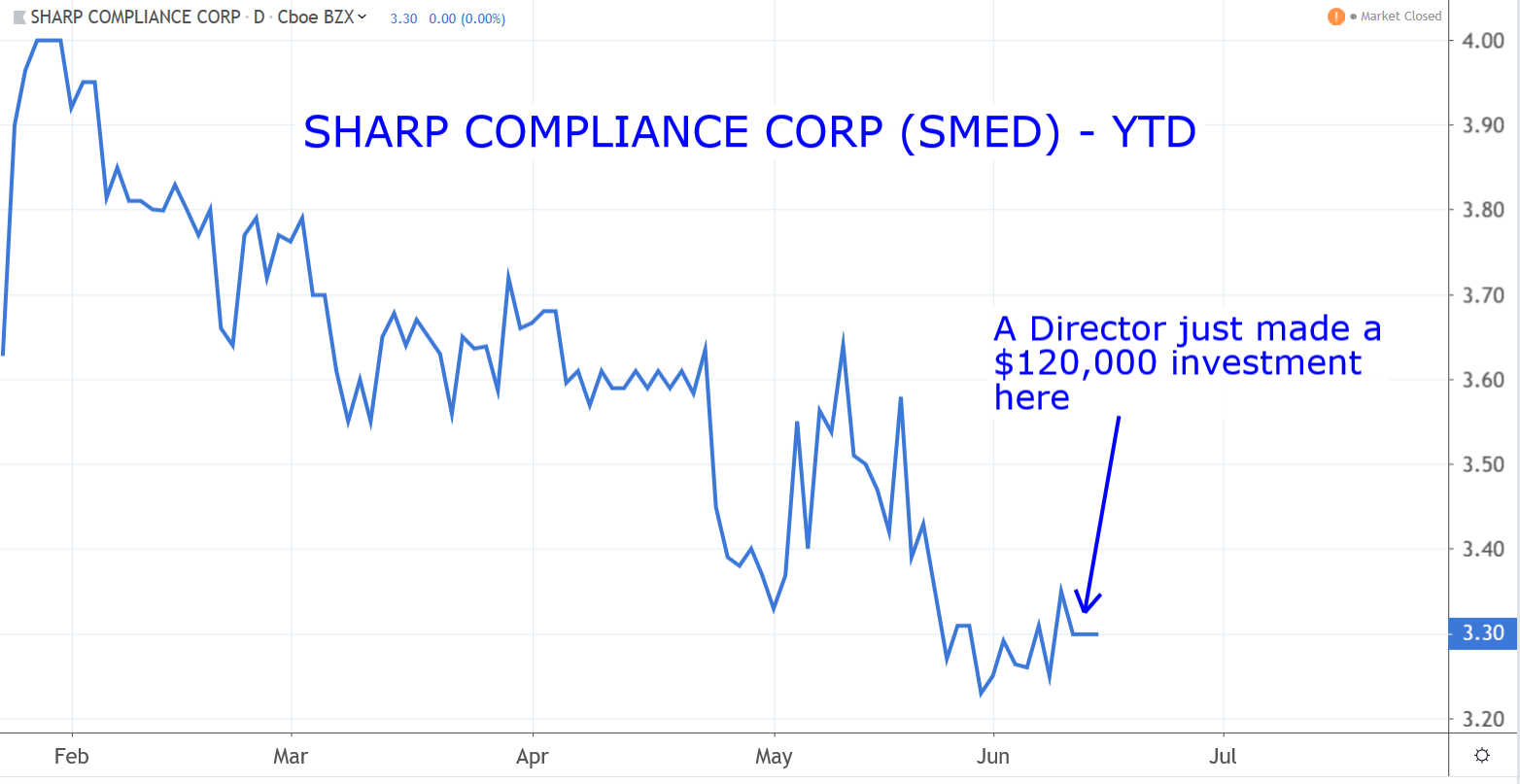 This year the price as SMED has dropped by about 20%. This could be due to the fact that the company reported a loss and revenues that were below estimates.

Only one firm on Wall Street follows this stock, and they have a “buy” on it. This isn’t surprising because when a company is only followed by one firm, there is a good chance that they do business together. For example, it is probably the company that backed the IPO.

Chemical Financial Corp. (NASDAQ:CHFC) is a financial holding company. It operates as Chemical Bank. I don’t know why it is called ‘Chemical’, but its origins go all the way back to 1924. Maybe at some point it did significant business with chemical companies. 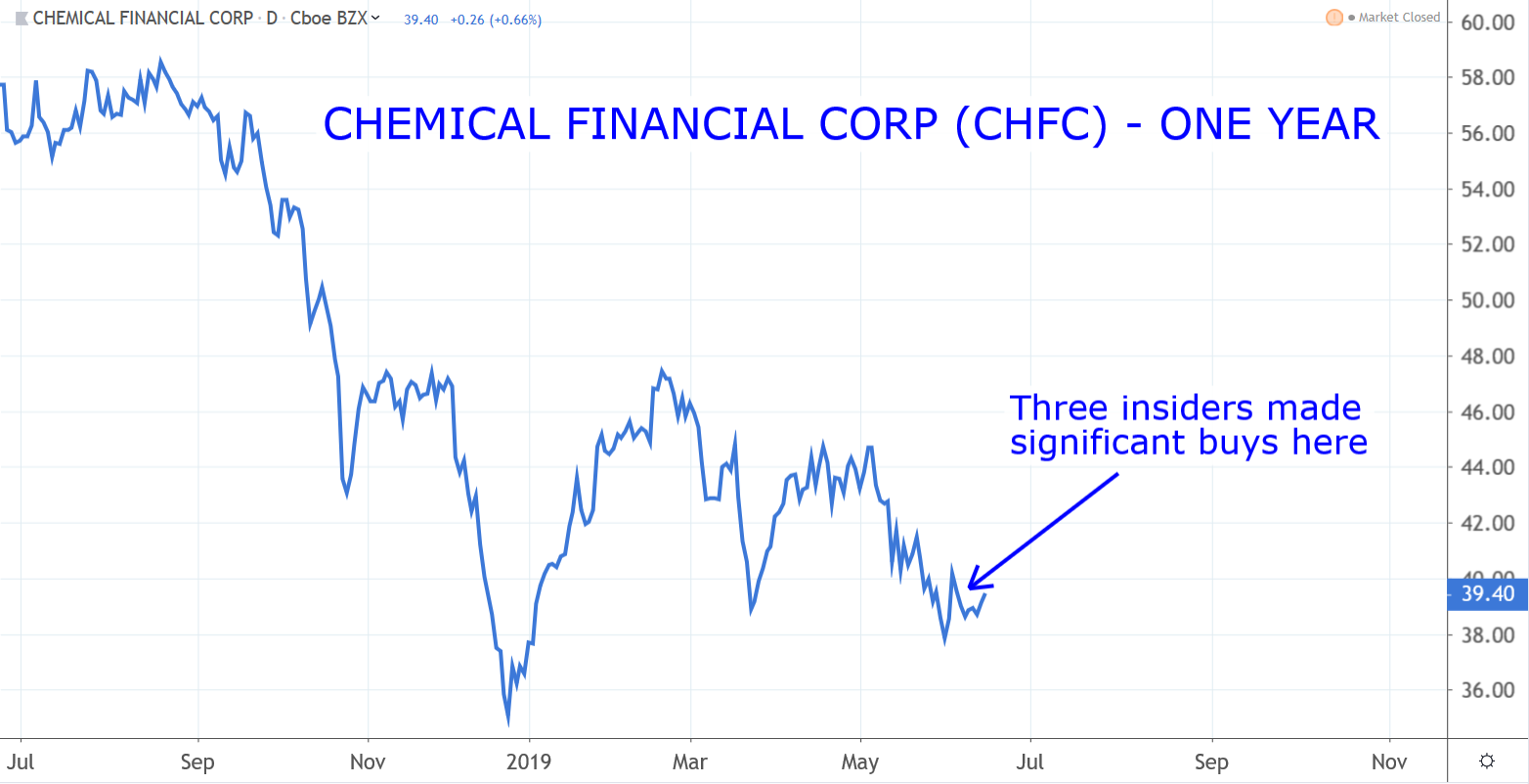 Over the past year the price of CHFC has dropped from $58 to current levels around $40. This is surprising because the companies earnings increased substantially from 2017 through 2018.

The insiders of Chemical seem to be surprised that the stock has fallen by so much as well. There has been significant buying.

David Provost is the CEO and President of the company. Dennis Klaeser is the Chief Financial Officer. Gary Torgow is a Director. All three of these insiders just made $400,000 investments when they each bought 10,000 shares.

Seven Wall Street firms follow chemical. Six of them have ‘buy’ ratings on it while the other has it as a “hold.” The average target price is $55, about 40% higher than the most recent close. 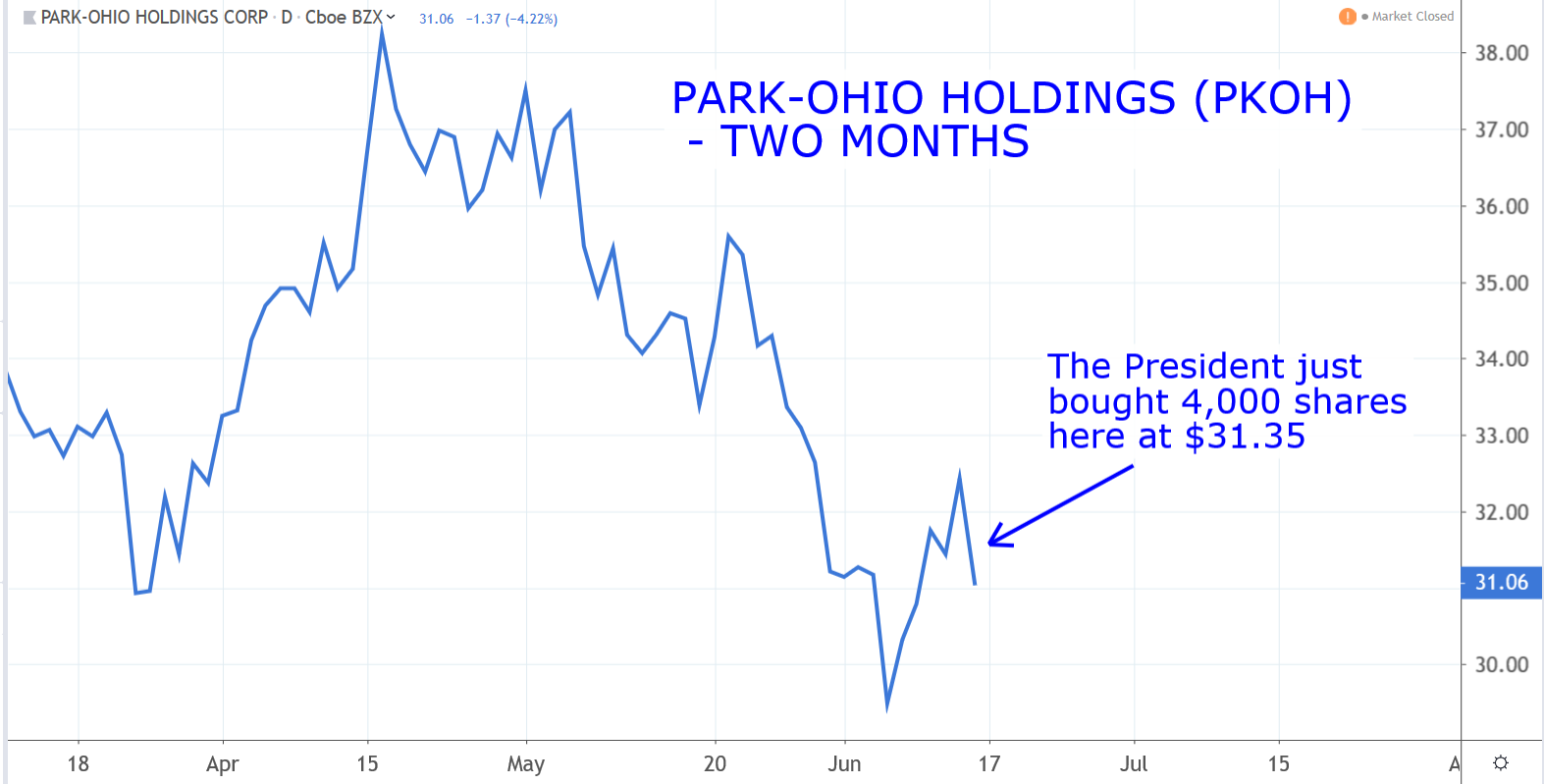 The price of PKOH has dropped by about 15% in just two months. This could be due to the fact that FBR & Co downgraded the stock from ‘outperform’ to ‘market perform.’

Edward Crawford is the President of Park-Ohio. Apparently he disagrees with the research team at FBR. He just paid $31.35 for 4,000 shares. This is an investment of $120,000.

Only three firms follow PKOH. Two of them have ‘buy’ ratings on it. The third, FBR, now has it as a “hold” or “market perform.”