There has been some important news recently that should be very bullish for the cannabis industry and marijuana penny stocks.

In August, the U.S. Department of Justice announced that the U.S. Drug Enforcement Administration will begin processing applications to grow cannabis for research purposes. As of now, the University of Mississippi is the only institution in the country that can do so. Now it will be easier to perform credible research.

Second, the U.S. House of Representatives passed the SAFE Banking Act. The goal of this legislation is to allow banks to provide services to companies that are in the cannabis industry. As of now, they can’t. The U.S. Senate must first pass this bill for it to take effect, but it is a major step in the direction of federal legalization.

Despite these developments, many cannabis stocks are trending lower. Many of the smaller companies have performed even worse. Eventually the industry will turn around, but my guess is that is still some time off.

Here are seven marijuana penny stocks that have been absolutely crushed. Investors used to have confidence in them. Maybe one day they will recover. However, I do not know if this will happen and these are not “buy” recommendations.

Remember that these stocks are extremely risky investments and you need to do your own research. After all, they are trading as penny stocks for a reason. There is a good chance that they won’t survive. 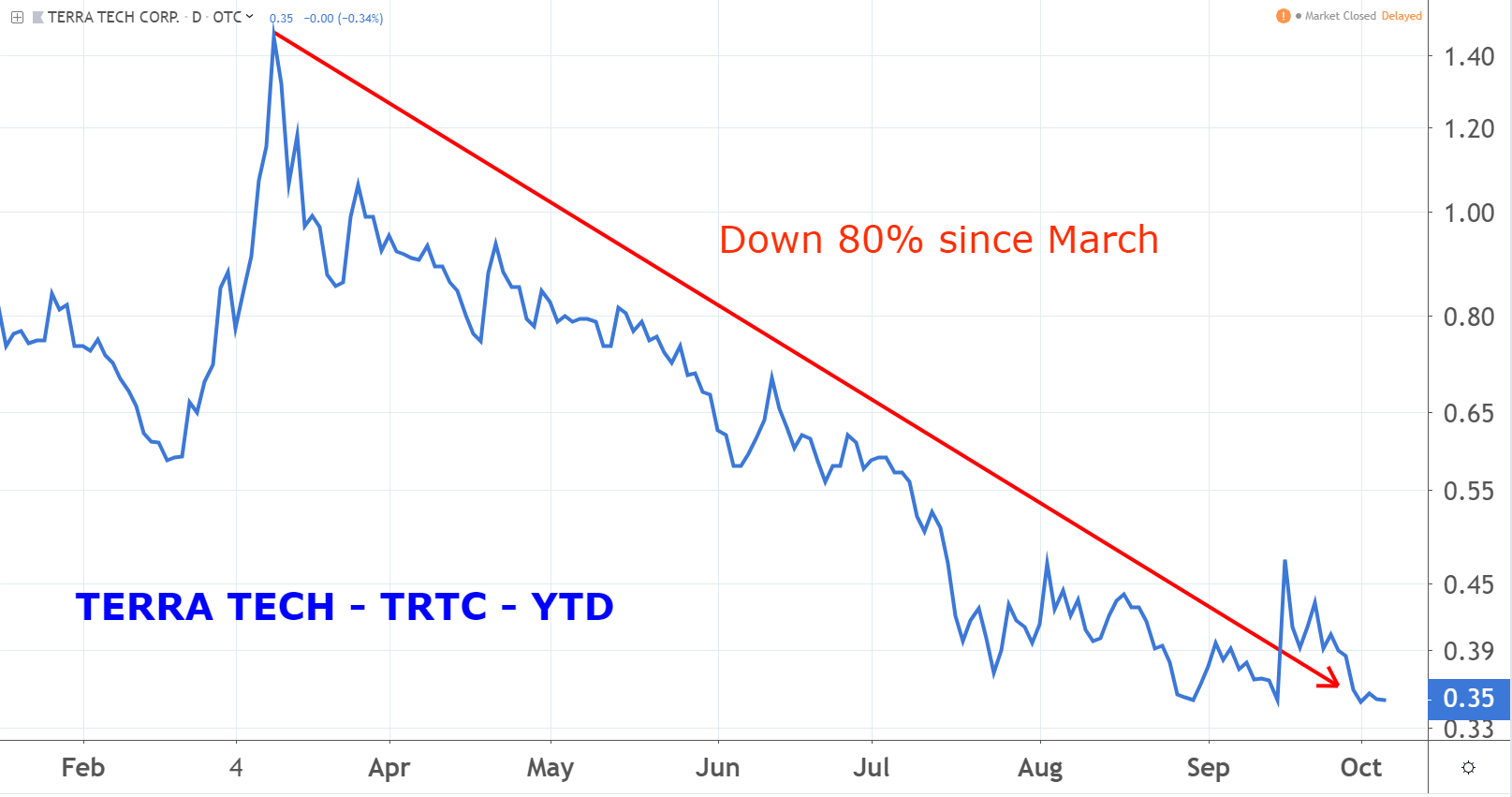 The company just announced a $20 million share buyback plan. CEO Derek Peterson explained “We believe that Terra Tech’s current market value does not reflect the underlying value of its business and future prospects, and that implementing a share buyback program is the best way we can return value to shareholders.”

Peterson may believe that better times are ahead for Terra Tech, but investors do not seem too impressed. They keep selling shares. This once promising company has seen the price of its stock fall by 60% since just this past March. 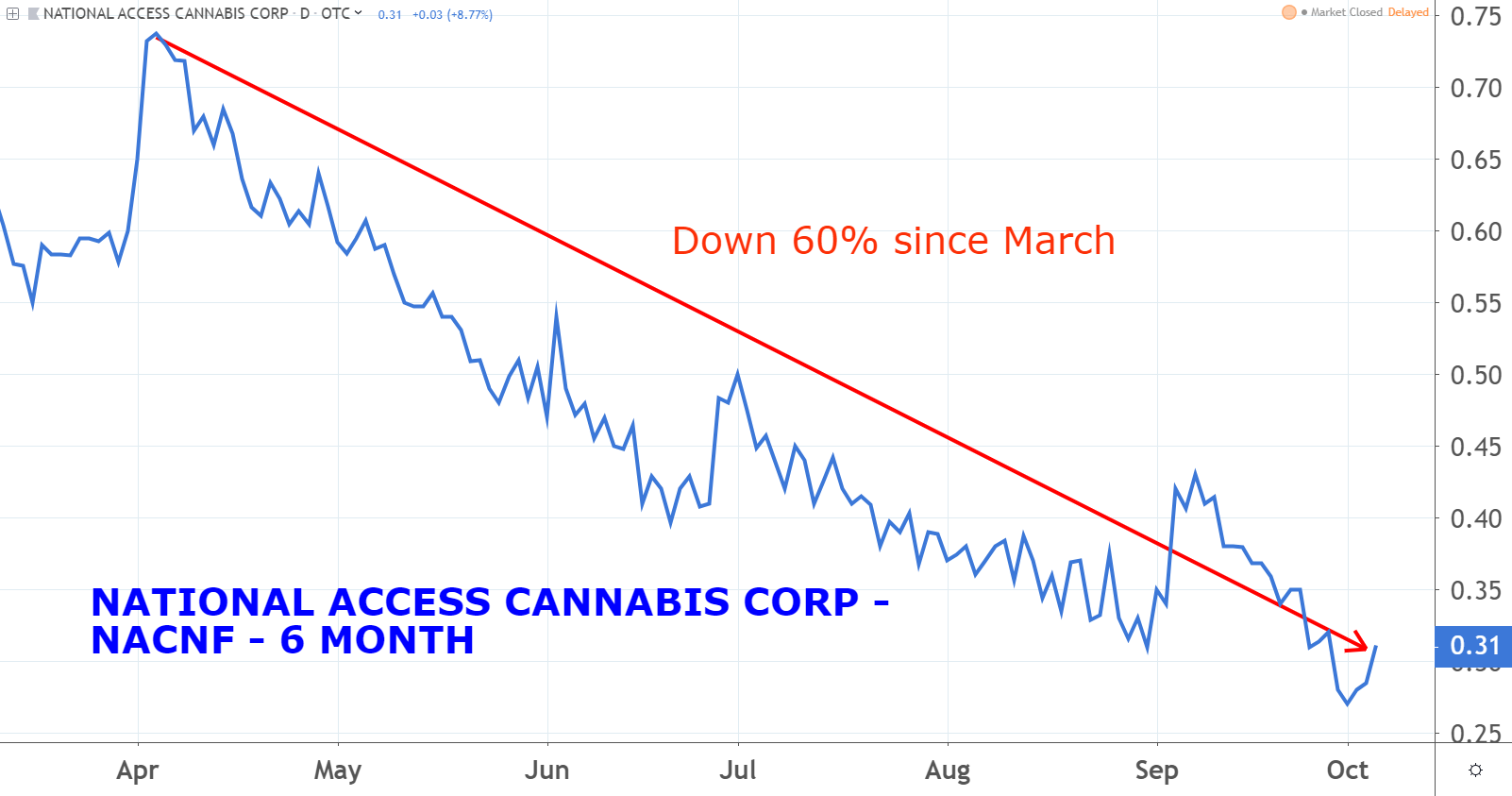 The company, along with Canadian entrepreneur Dr. Tyler Wish, recently announced the launch of NACBio, a cannabis intelligence-as-a service company. Apparently this has something to do with big data and artificial intelligence.

I have no idea what this is or how it will benefit the company, but it will probably take more to turn things around. NACNF shares have dropped by 46% since this past March and they are showing no signs of recovery. 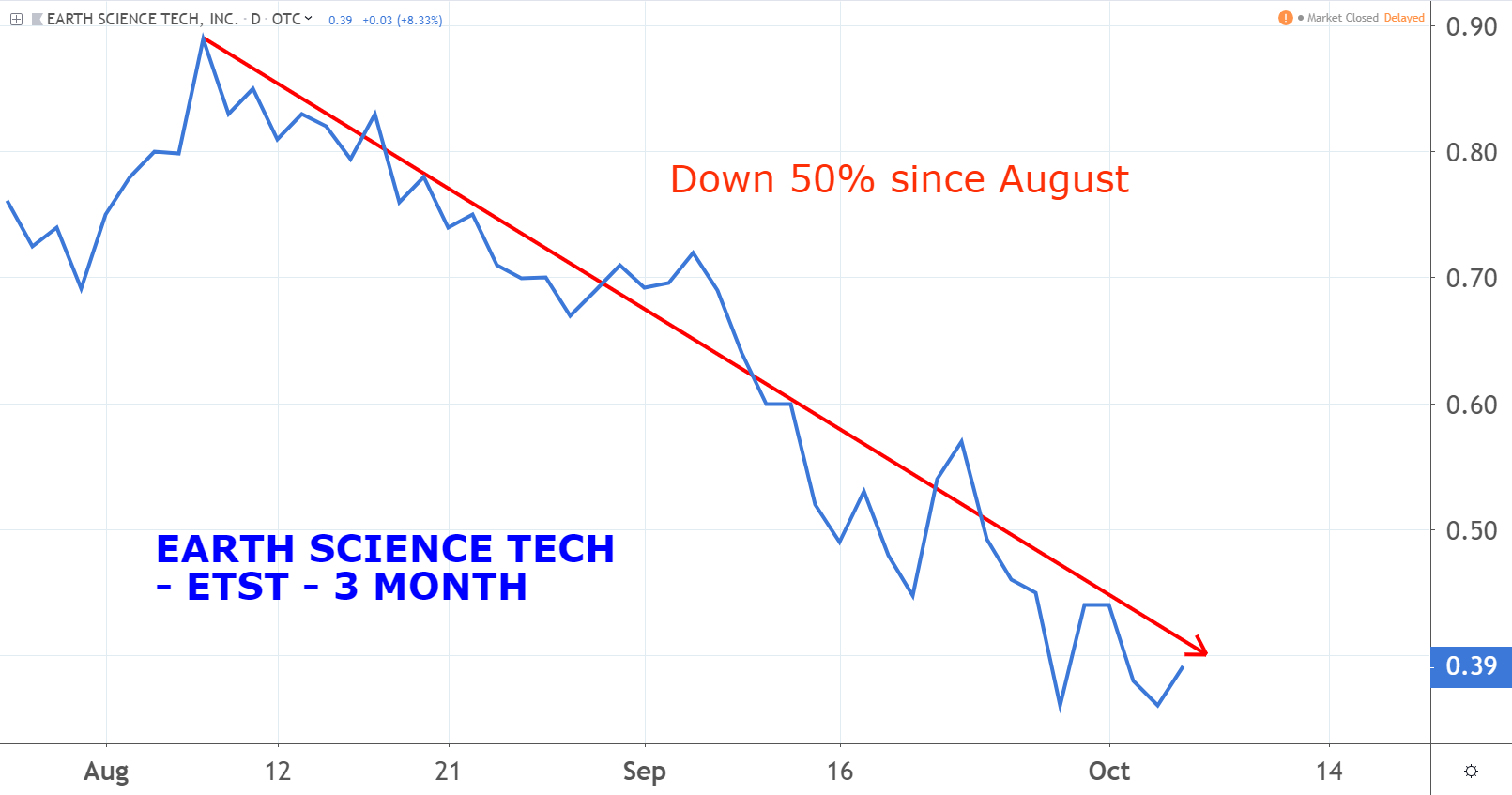 Earth Science recently announced that it has hired a pharmaceutical and orthopedic expert to be the head of its new sales division. This division will focus on developing CBD for therapeutic and pharmaceutical grade products.

This was most likely done to position the company for Cannabis 2.0, the upcoming legalization of edible cannabis products in Canada.

Shareholders are apparently not very impressed. Since August ETST stock has dropped by 52%. The market cap of the company is now about $19 million. 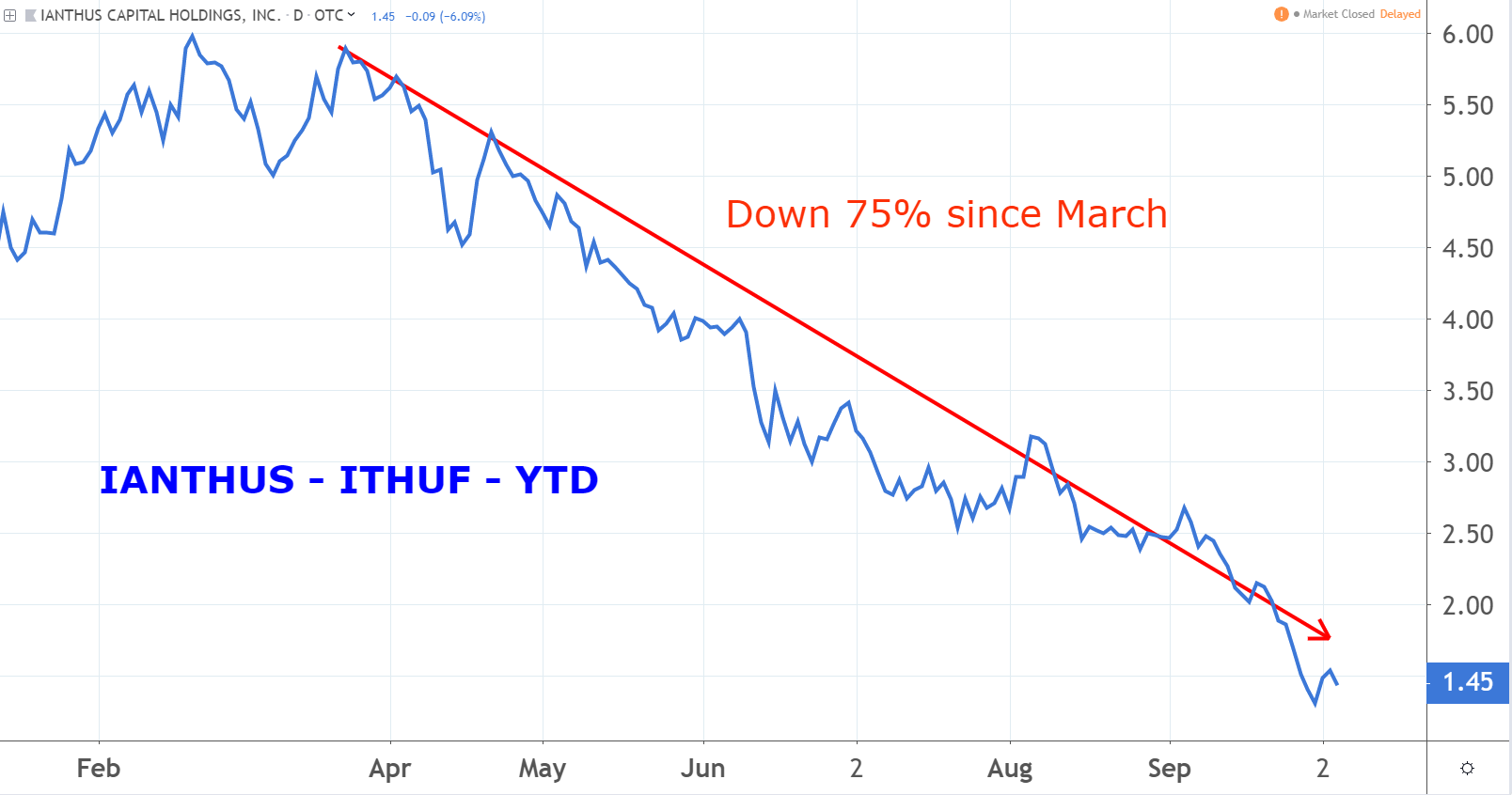 This company just announced that it has received an additional $20 million investment from one of its investors, Gotham Green Partners. Usually an additional investment from a strategic partner is consider good news, but in this case shareholders and investors apparently do not think so. ITHUF shares have dropped by 65% year-to-date.

Despite this terrible performance, Wall Street likes this stock. Nine firms follow it. There are eight “buy” recommendations and one “overweight” recommendation on the stock. The average target price is about $6.50. This is more than four times higher than where it is currently trading. 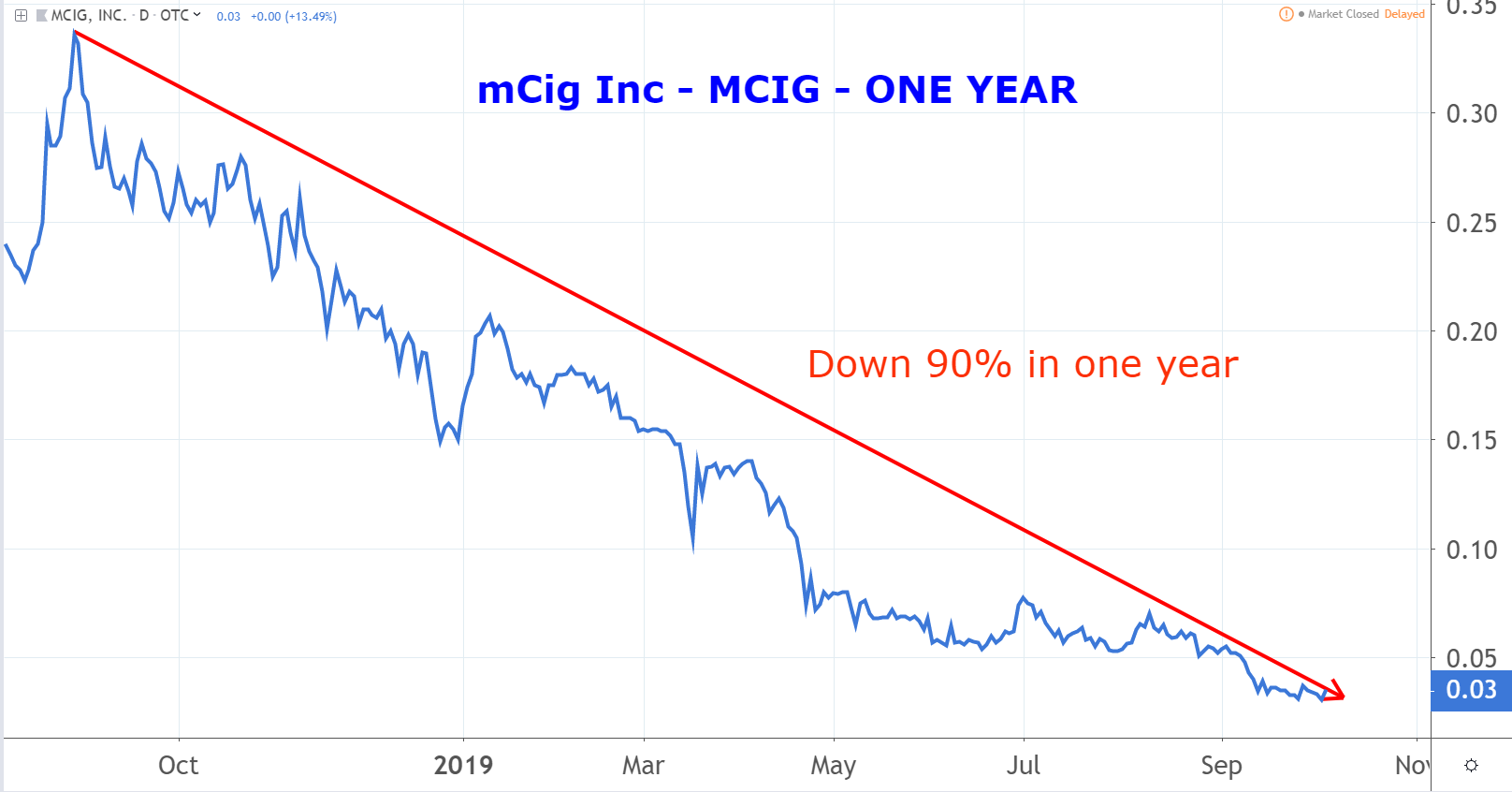 mCig (OTCMKTS:MCIG) operates in the cannabis industry. It has four segments including cultivation and manufacturing, retail sales, media and technology and agriculture.

Some analysts may believe that this company is suffering due to the recent health issues and even deaths that have been attributed to vaping. However, it is clear that the problems with MCIG started well before this news came out.

The company recently reported that it has changed auditors, which typically isn’t a good sign. It also announced that the board of directors hired a new Co-CEO in July. This probably isn’t a good sign either. After all, if the CEO knew what they were doing, why would they need a partner?

It goes without saying that these moves have not impressed shareholders. The price of MCIG stock has dropped by 90% over the past year. 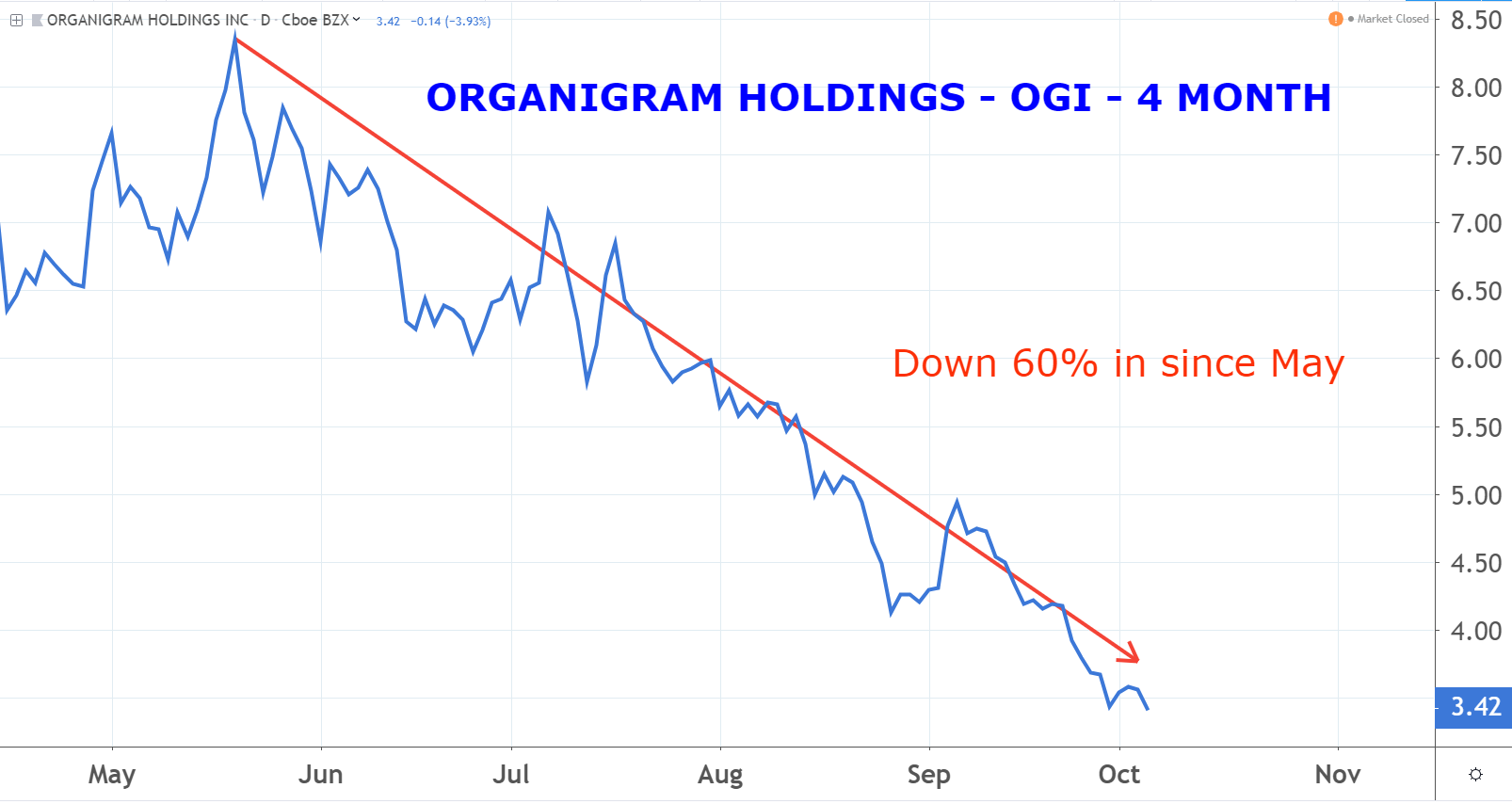 OrganiGram Holdings (NASDAQ:OGI) produces and sells dried cannabis. It has a current market cap of about $518 million.

The U.S. Securities and Exchange Commission considers penny stocks to be those that are trading at $5 or less. OGI stock wasn’t a penny stock until recently, but unfortunately for shareholders, it is now.

OGI shares have dropped by about 60% since May when they were trading for over $8 per share. The most recent close was at $3.56.

Despite this, Wall Street is bullish on the prospects of this company. Fifteen firms follow it. There are 11 “buy” recommendations, two “overweight” ratings and two “hold” ratings on the stock. The average target price is around $11.75. This is more than three times higher than current levels. 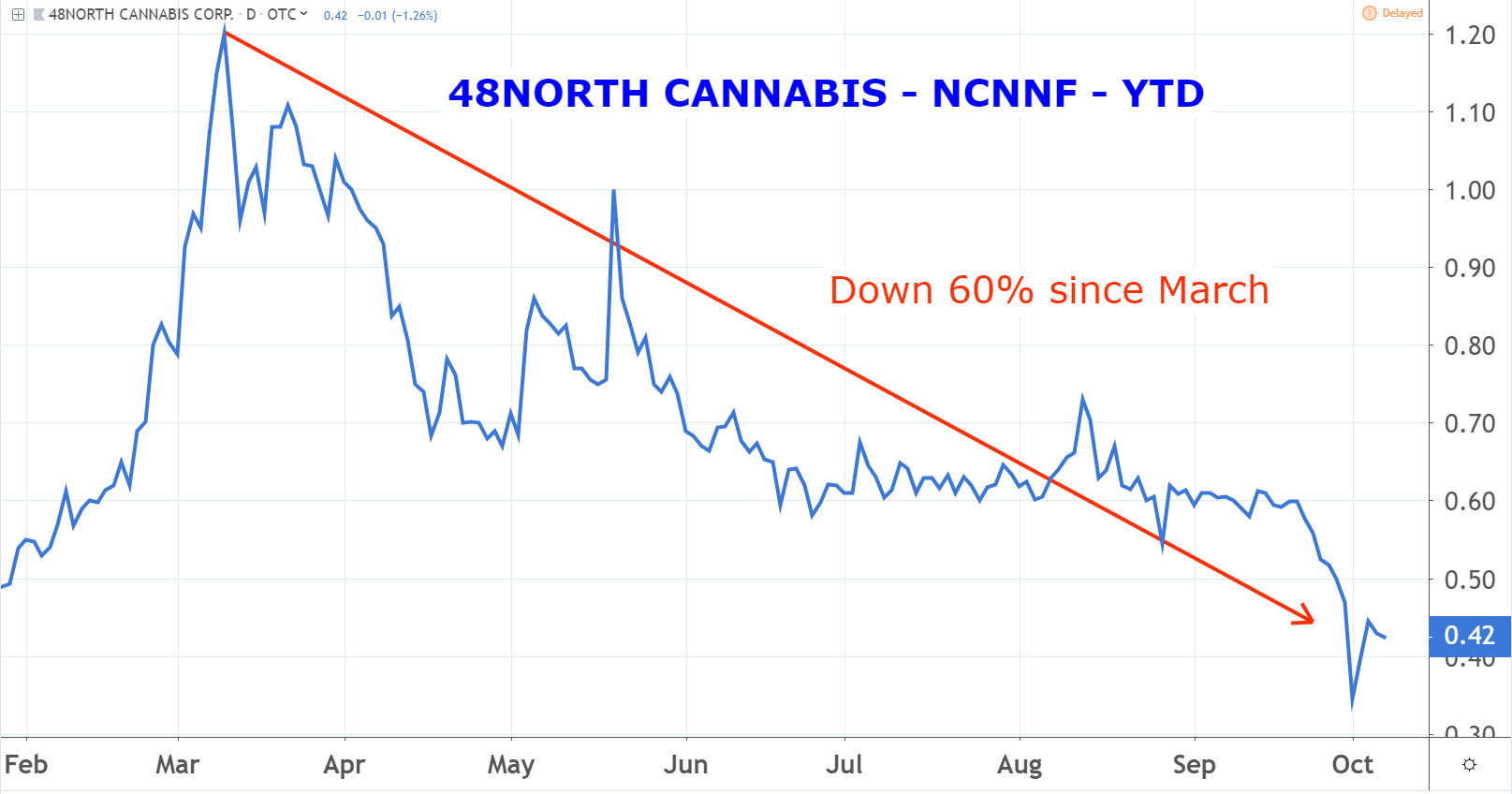 48North Cannabis (OTCMKTS:NCNNF) is a cannabis company that focuses on the female health and wellness markets in Canada. The market cap is just under $74 million.

NCNNF just reported earnings and they seem to have been pretty good. The loss for the fiscal year ending in June was 7 cents CAD. This is significantly less than the loss of 21 cents CAD that the company reported last year.

This comprehensive loss was $8.1 million CAD, which was about $4 million CAD less than last year.

The company also reported that it has raised more than $48 million CAD, and now has almost $53 million CAD of cash and cash equivalents on hand.

Despite these seemingly positive developments, shareholders have been selling their stock. Since March shares of 48North have headed south. They have dropped by about 46%.