We’ve been pounding the table on Lucid Motors END_OF_DOCUMENT_TOKEN_TO_BE_REPLACED

Global equities are under pressure on Friday as traders worry about the fallout from the attack on two energy tankers in the Persian Gulf as well as dismal economic data out of China, where industrial output growth slowed to a 17-year low.

Semiconductor stocks are getting hit hard, with the pressure beginning over in Europe with names like Infineon, AMS and STMicroelectronics (NYSE:STM) feeling the hurt after Broadcom (NASDAQ:AVGO) cut forward guidance and warned of a demand slowdown due to a tech ban resulting from U.S.-China trade tensions.

All eyes are now turning towards the Federal Reserve’s next policy announcement on June 19, with hopes high that officials heed the message of the futures market and prepare for interest rate cuts later this year. The promise of easier credit could help juice the market higher as the economic data worldwide becomes more and more disappointing.

The specter for disappointment is extremely high, however, with history reminding us that the majority of prior Fed interest rate cuts come as a recession is already in flight. If so, the selling could well intensify, led by the makers of the silicon “raw materials” of our modern economy: Semiconductors.

Here are four stocks in the industry to consider selling: 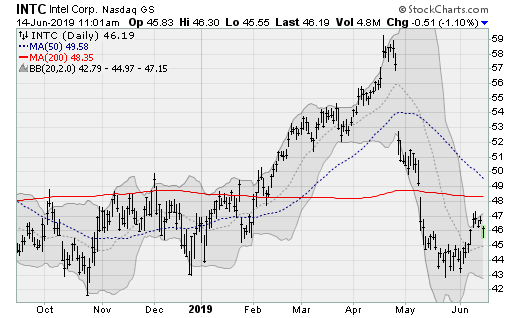 Intel (NASADQ:INTC) shares continue to languish below their 200-day moving average, marking a 22% decline from the late-April high a continuing a long sideways range going back to late 2017. A breakdown below critical support near the $42-a-share level would result in a likely decline back to the 2016-2017 trading range near $34, which would be worth a loss of more than 25% from here. 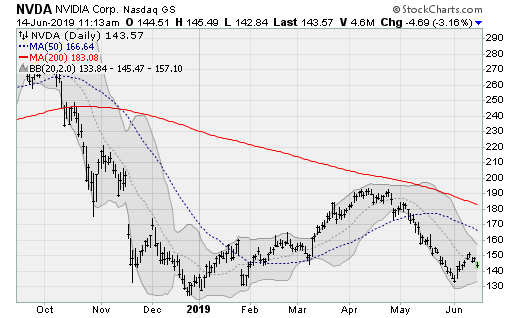 Nvidia (NASDAQ:NVDA) shares are simply unable to get up off the mat, as the onetime momentum sweetheart languishes near its late December lows and remains well below its 50-day and 200-day moving averages. A slowdown in GPU sales, a loss to AMD (NASDAQ:AMD) on upcoming gaming console refreshes from Sony (NYSE:SNE) and Microsoft (NASDAQ:MSFT), and a popping of the bitcoin bubble have all contributed to the downturn.

The company will next report results on Aug. 15 after the close. Analysts are looking for earnings of $1.14 per share on revenues of $2.6 billion. When the company last reported on May 16, earnings of 88 cents per share beat estimates by seven cents on a 31% drop in revenues. 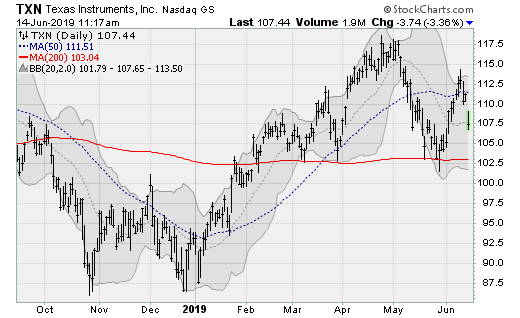 Shares of Texas Instruments (NASDAQ:TXN) are rolling down what looks like the right shoulder of a nasty-looking head-and-shoulders reversal pattern bounced by a neckline that coincides with its 200-day moving average. A breakdown here would trace down to a decline back to its late-December lows, worth a loss of roughly 15% from here. Earlier in the month, analysts at Cascend Research noted that demand for power chips in the industrial, automotive, and consumer products area was weakening at a 18%-plus pace year-over-year. This was the worst result in eight years and will weigh on TXN stock’s top line results.

The company will next report results on July 23 after the close. Analysts are looking for earnings of $1.22 per share on revenues of $3.6 billion. When the company last reported on April 23, earnings of $1.26 beat estimates by nine cents on a 5.1% decline in revenues. 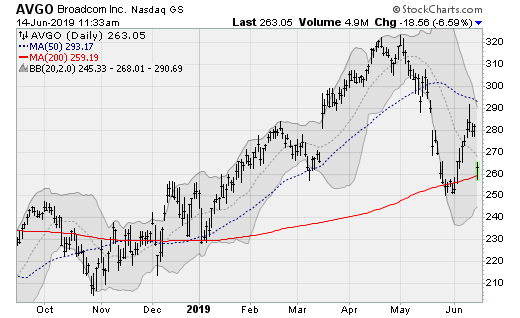 Broadcom shares are down sharply, nearly 7% as I write this, testing their 200-day moving average average. Management cut its forward guidance as part of its quarterly earnings report, warning that fiscal 2019 results would be dampened by waning demand and ongoing trade tensions. There are a few silver linings, from 10% expected bump in content growth thanks to the 5G wireless rollout to module wins in the upcoming Apple (NASDAQ:AAPL) iPhone 11.

The company will next report results on Sept. 12 after the close. When the company last reported on June 13, earnings of $5.21 beat estimates by three cents on a 10% rise in revenues.