4 Marijuana Penny Stocks That Could ‘Double’

We all know that legal cannabis markets are booming and pot is increasingly being accepted into our society. There seem to be countless advertisements courting subscribers to this or that service for marijuana penny stocks that have, allegedly, doubled or tripled in price. But you need to be careful and treat any advertisements touting great investment performance with a grain of salt. I shouldn’t have to tell you that this advertising can be very misleading.

There can be statements that are technically true, but at best they’re misleading … at worst, they’re deceitful. Example: If a stock goes from 2 cents to 4 cents then technically it has gone up by 100%. However, this is not the same as a stock going from say $2 to $4 or $20 to $40.

Consider the following. When someone buys or sells a stock “at market,” they will receive the best price that currently exists in the market. If they are selling, they will get the highest price that anyone in the market is willing to pay. If they are buying, they will get the lowest price that anyone is willing to sell at. Suppose a stock is bid at 2 cents and offered at 4 cents. This means that the most anyone will pay for the stock is 2 cents, and the lowest anyone will sell it for is 4 cents.

Now, say someone sells 100 shares at the market and hits the bid. The last trade is two cents. Suppose one minute later someone else buys 100 shares at the market and pays the offer price. Now the last trade is four cents. This is +100% from the prior trade. The stock has apparently doubled, but in reality it hasn’t moved! And if you paid 4 cents for your investment, you literally need to wait for the stock to double and the bid to become 4 cents just to break even!

Just remember that if it seems too good to be true, it probably is.

Here are four examples of seemingly legitimate companies whose stock prices would suggest otherwise. I’m not saying that you can’t make money with them … it’s not outside the realm of possibility. But neither is the chance that space aliens will invade tomorrow, enslave us and ship us off to work in some dilithium crystal mines on the other side of the galaxy. But I wouldn’t bet on it, just like I wouldn’t bet on these stocks.

[A word of warning: Due to their extremely low prices these and other penny stocks can be very volatile. This makes them dangerous investments.]

The first one is Rocky Mountain High Brands (OTCMKTS:RMHB). RMHB refers to itself as “a publicly-traded, lifestyle brand management company that markets ‘good for you’ products to health-conscious consumers.” 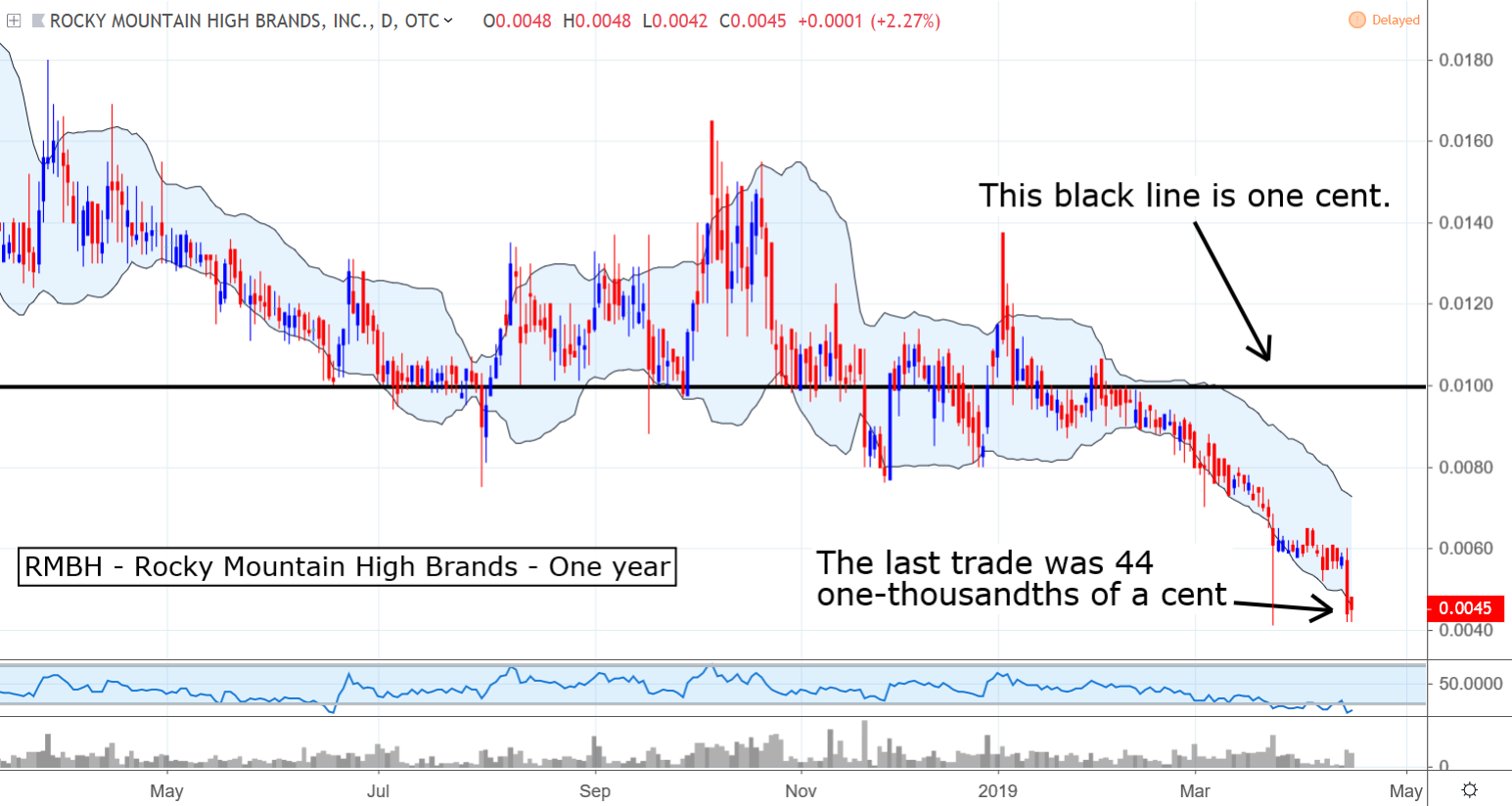 It seems to be a “real” company, insofar as it has a decent-enough website and people apparently actually work there. But take a look at the stock.

On the chart above, the highest price displayed on the X axis of the price scale is .018 … just under two cents.

Commissions, liquidity constraints and transaction costs will keep this from happening. The stock is not trade-able.

This next gem is Ubiquitech Software (OTCMKTS:UBQU). The company considers itself a “multimedia, multi-faceted corporation focused on utilizing state of the art global internet marketing and traditional marketing to drive traffic to multibillion-dollar industries.” 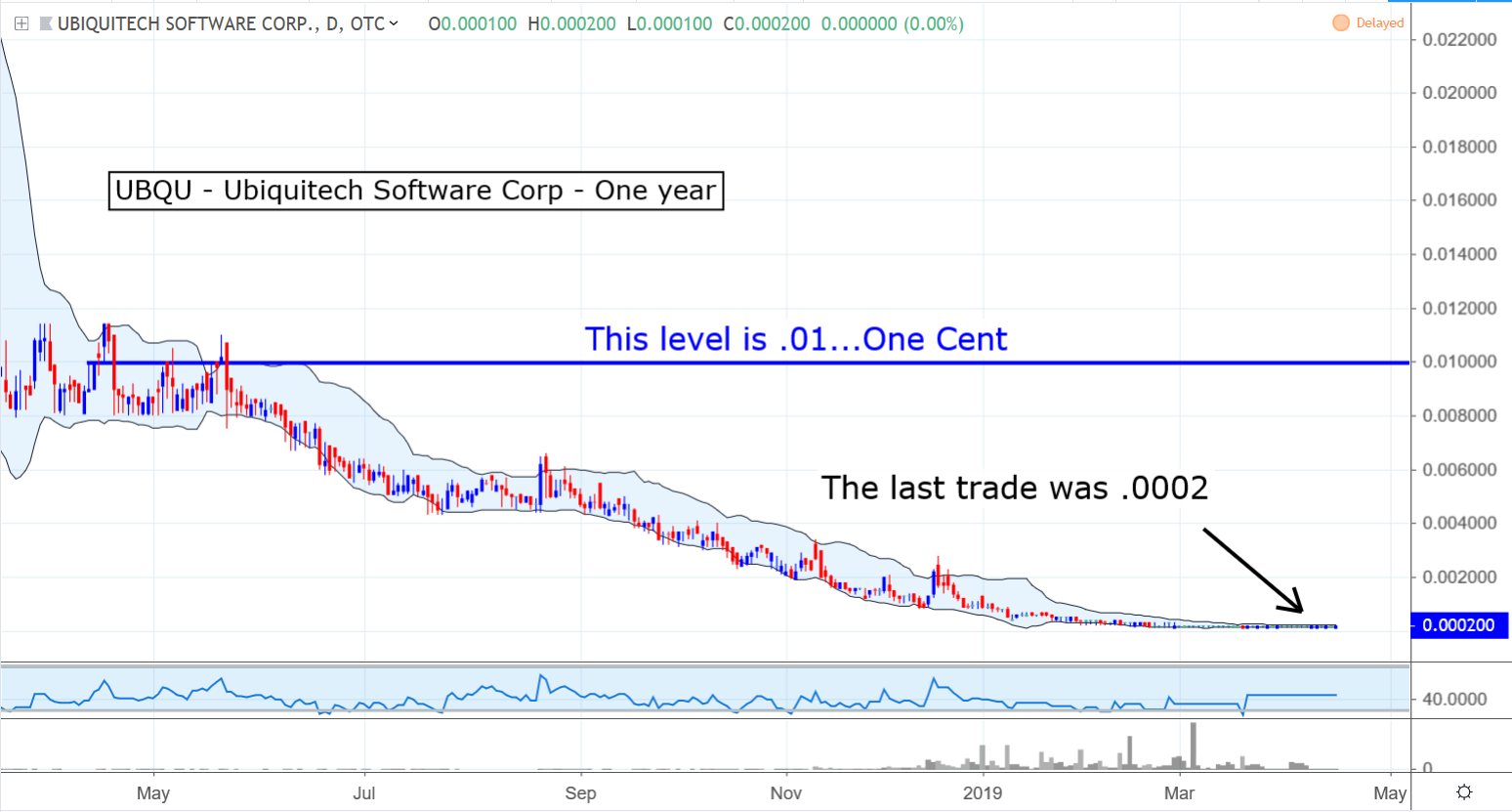 To illustrate some of the misunderstandings of these types of markets, check out this ridiculous analysis from insiderfinancial.com:

“Ubiquitech Software Corp might as well have found a way to reinvigorate its ailing prospects having taken a significant hit. The company is in the process of changing its name and has also decided to forego its cryptocurrency ambitions all in the effort of focusing on the hemp business. HempLife Today is the proposed name change that the company believes reaffirm long-term ambitions and plans.

The restructuring drive appears to have caught investors’ attention given the increased trading activity around the stock in recent trading sessions. While the stock is still languishing at all-time lows having lost more than 80% in market value, a high turnover in traded shares could as well signal a change in the direction of trade.

The stock has started showing signs of bottoming out having spiked by more than 60% in recent trading sessions. After the recent spike higher, the stock faces immediate resistance at the $0.006 level on further movements on the upward.

A rally followed by a close above the critical resistance level should reaffirm the emerging uptrend, setting the stage for the stock to continue climbing high. Below the $0.006 resistance level, the stock remains susceptible to further declines given the underlying bear trend and the fact that short sellers are still in firm control”.

You have got to be kidding me. Resistance at six-one thousandths of a share? Short sellers in control? Apparently whoever wrote this drivel doesn’t realize that in order to short a stock it needs to be marginable. Penny stocks are not marginable, so there are no short sellers in this market. Again, this stock is not tradeable and this analysis is completely invalid.

This is GrowLife Inc (OTCMKTS:PHOT). They say they are “a nationally recognized cultivation brand” that deals in hydroponics. Hydroponics are essentially a way of growing cannabis without soil, but with water, sand or even gravel. GrowLife provides this equipment to the grow houses that, well, grow the pot. They also supply lighting and “other cultivation supplies” for use in many environments, including for commercial use. 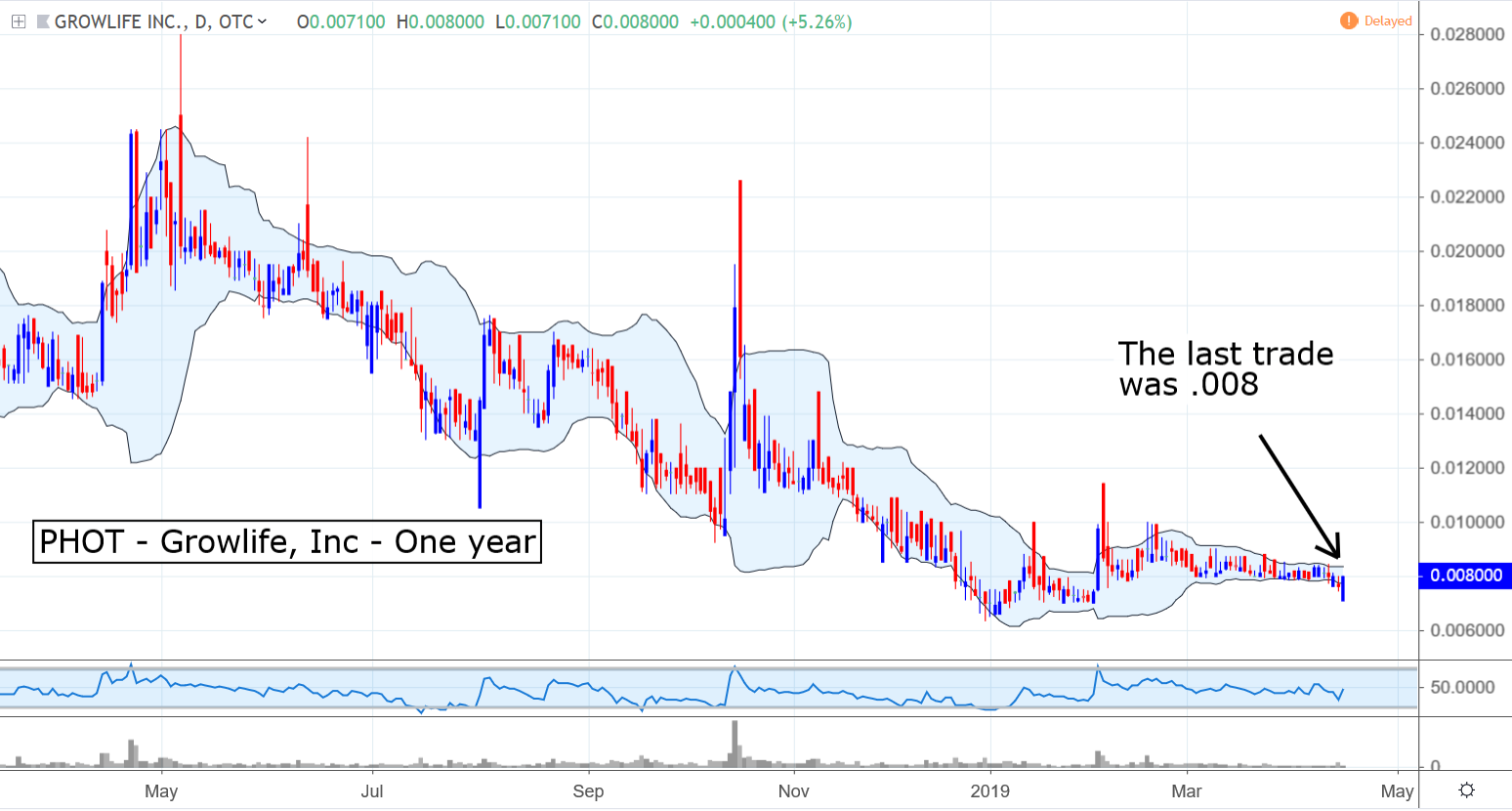 The last trade was at .008. If it “rallies” to .016, did it really a double? On paper “yes.” But as I mentioned earlier, percentages can be tricky, as they mask the true value when used in a misleading way. I’d much rather see a stock like Roku (NASDAQ:ROKU) double.

In real life, could you actually make this trade with a meaningful amount of money? Not a chance.

Last, but certainly not least we have Green Cures & Botanical Distribution Inc(OTCMKTS:GRCU). According to its website, Green Cures deals in infused drinks, which it considers “nutritional, botanical, sports and body care products.” It doesn’t have a brick-and-mortar retail presence, and it is currently focused on online sales to generate sales. 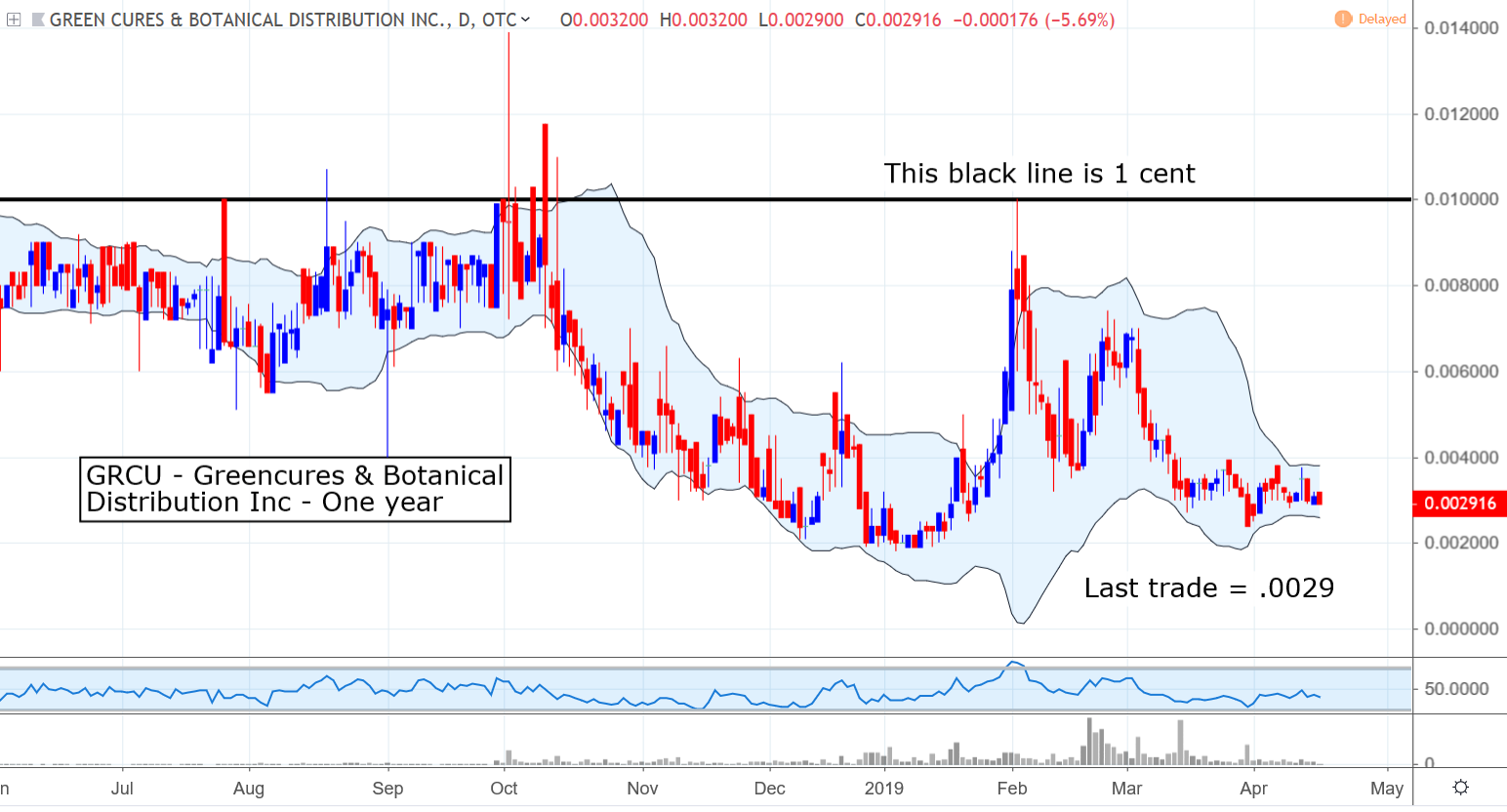 “From concept to production and distribution, Green Cures & Botanical Distribution Inc., is continuously creating and introducing products that promote a healthy lifestyle.” Yeah, sure. One look at the stock and you’ll think otherwise.

GRCU stock closed at .0029. If you wanted to invest $20,000 in it — and were actually able to buy it — you would be long 6,900,000 shares. That is more than 10 days worth of the average daily volume! It would not be possible to trade that many shares without affecting the price.