The buzz is largely gone. And today’s situation END_OF_DOCUMENT_TOKEN_TO_BE_REPLACED

Psychedelics could be a game-changer for millions struggling END_OF_DOCUMENT_TOKEN_TO_BE_REPLACED

U.S. equities find themselves in the red again on Thursday amid fresh concerns about the fate of the ongoing trade discussions with China. The Dow Jones Industrial Average is down over 200 points as I write this, threatening to fall below its 50-day moving average for the first time since January.

Obviously, investors are on edge since we are entering the worst six months of the year for the stock market. “Sell in May” has a strong seasonal tendency to be right. This is especially true when you combine it with technical sell signals, such as a downward break of the 50-day moving average which seems likely in the coming days.

The catalysts are familiar: Political gridlock (minimizing chances of an infrastructure bill), a lack of comfort from the Federal Reserve (who seems to think inflation could bubble up again), tensions with trading partners and the ongoing standoff over Iranian and Venezuelan oil.

As a result, a number of mega-cap stocks are weakening noticeably. Here are four Dow Jones stocks to sell:

After suffering a big pullback in March following the Ethiopian Air crash of a 737 MAX, and the subsequent grounding of the model for a safety flaw, Boeing (NYSE:BA) shares are under renewed pressure as the software “fix” is taking longer than the bulls had assumed — risking not only order cancellations but legal liabilities as well. 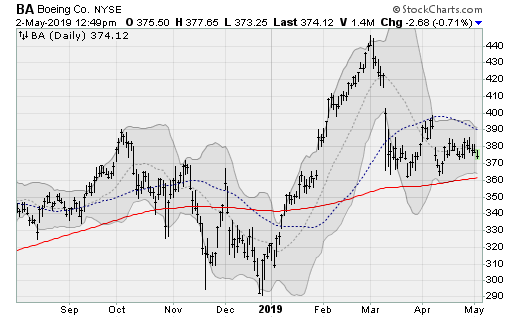 The company will next report result son July 24 before the bell. Analysts are looking for earnings of $1.82 per share on revenues of $21.5 billion. When the company last reported on April 24, earnings of $3.16 missed estimates by 3 cents on a 2% decline in revenues.

Shares of Caterpillar (NYSE:CAT) have fallen below their 50-day moving average and are threatening to lose their 200-day average as well. This is setting CAT shares up for a break of the uptrend that has been in place since late October. There fear is that without a U.S.-China trade deal, exports to the Middle Kingdom will be under threat. 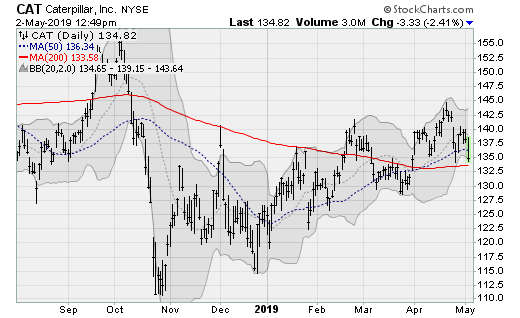 The company will next report results on July 24 before the bell. Analysts are looking for earnings of $3.1 per share on revenues of $14.5 billion. When the company last reported on April 24, earnings of $2.94 beat estimates by 8 cents on a 4.7% rise in revenues. Forward guidance was reaffirmed.

After rising impressively on the back of higher energy prices, oil and gas stocks like Chevron (NYSE:CVX) are coming under pressure now on a combination of profit taking and a pullback in crude oil with the U.S. Oil Fund (NYSEARCA:USO) falling below its 200-day moving average. The company is locked in a bidding war for Anadarko (NYSE:APC) with Occidental (NYSE:OXY). The bears fear the company will up its offer and overpay. 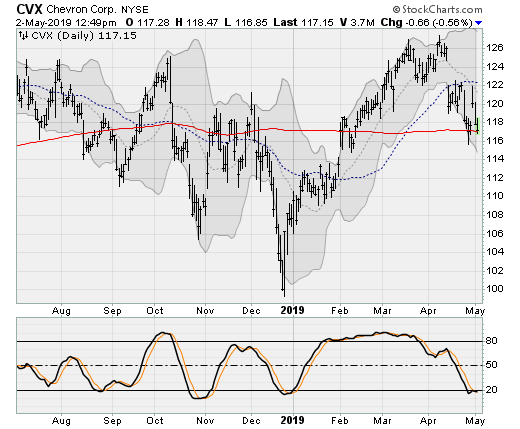 The company will next report results on July 26 before the bell. Analysts are looking for earnings of $2 per share on revenues of $41.3 billion. When the company last reported on April 26, earnings of $1.39 beat estimates by 6 cents on a 6.8% decline in revenues.

Shares of Dow DuPont (NYSE:DWDP) are falling down and out of a six-month consolidation range after a failed attempt to break up and over its 200-day moving average. This range capped a 30% decline from the highs set in early 2018 and sets up a possible return to the lows seen in early 2016, which would be worth a loss of more than 25% from here. 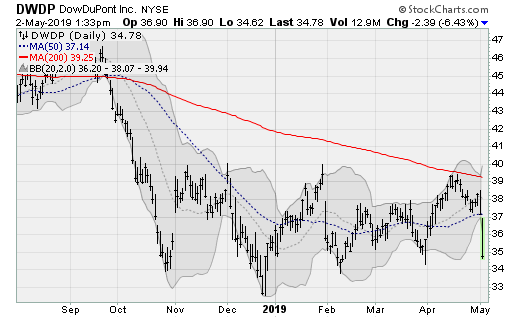 When the company reported earnings today, earnings of 84 cents per share missed estimates by a penny on an 8.7% decline in revenues.