The marijuana industry has been on a roller-coaster ride since 2019 -- a dreadful year that pulled the industry benchmark, the Horizons Marijuana Life Sciences ETF (OTC: HMLSF), down by 36%. Regulatory delays, particularly in Canada, were a large reason for the decline, because they allowed the black market to thrive amid a backdrop of fewer legal stores than expected.

But this year has been favorable, at least until now, as the coronavirus pandemic has increased the demand for cannabis. U.S. marijuana companies, in particular, are flourishing. Recently, Massachusetts-based Curaleaf (OTC: CURLF) reported its second-quarter 2020 results for the period ended June 30, which showed its continued strength in the U.S. markets. Illinois-based Green Thumb Industries (OTC: GTBIF) also has seen drastic revenue growth this year, accompanied by continued profitability. Let's look at three things in its recent second-quarter results that make Green Thumb a great buy right now. 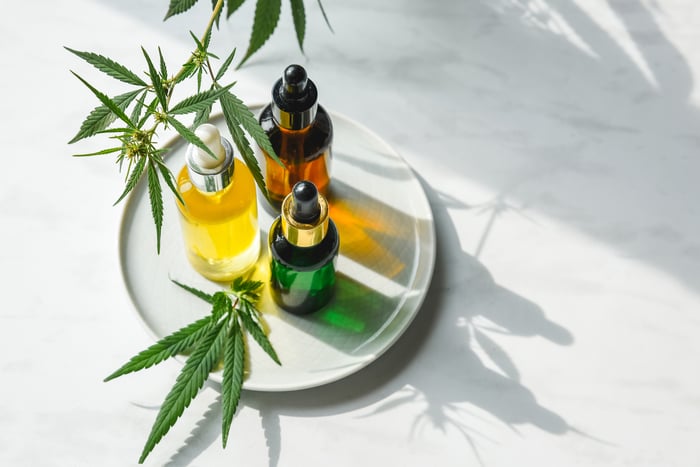 Green Thumb is the owner of cannabis stores bearing the Rise and Essence names, and it manufactures and sells a wide range of medical and recreational cannabis products under the Dogwalkers, Dr. Solomon's, and Rhythm brands. The second quarter -- which ended June 30 -- showed first-half revenue of $220 million, outperforming full-year 2019 revenue of $216.4 million.

Green Thumb's revenue in Q2 was up a whopping 167.5% to $119.6 million from the year-ago period. Its consumer packaged goods and retail segments were both responsible for the sales of various cannabis products, such as vape pens, cannabis strains, edibles, flowers, and cannabidiol skincare products.

2. Expansion plans continuing amid the pandemic

Green Thumb's strength lies in its strong footing in its home state of Illinois, which legalized recreational marijuana Jan. 1. In the first month, total sales touched $39.2 million, and they hit a record-breaking $61 million in July. To take advantage of growing demand, Green Thumb opened its eighth store in the state in May.

This company has shown it's able to expand during a crisis, even as others are struggling to stay afloat. In 2020, it opened nine retail stores, bringing its total to 48 locations in 12 U.S. states. Among them were two new medical cannabis stores in Pennsylvania -- Rise Chambersburg and Rise Duncansville. As markets slowly start to open up after coronavirus-related lockdowns, Green Thumb plans to expand further into popular tourist destinations. It opened its fifth retail store in Las Vegas in June and holds licenses to open six more stores in Nevada.

Management remains confident about the future, noting that the coronavirus pandemic has helped marijuana be accepted more broadly as a consumer staple product. The company holds a total of 96 retail licenses as part of its expansion plans, and its balance sheet is solidly supporting its growth strategy. It ended the second quarter with $82.9 million in cash and cash equivalents and $95.2 million in total debt.

3. Another quarter of positive profitability

Most U.S. cannabis companies are profitable, but those above the border are still struggling to break even. Popular players Aurora Cannabis and Canopy Growth have so far failed to report positive EBITDA (earnings before income, tax, depreciation, and amortization). Meanwhile, Green Thumb's rising revenue led to another quarter of positive EBITDA; the total of $35.4 million was much higher than the $2.3 million it achieved in the year-ago period. Peer Curaleaf also saw a notable jump in its adjusted EBITDA, which came in at $28 million versus $3.3 million in Q2 2019. Much like Green Thumb, Curaleaf has also focused on expansion amid the pandemic to strengthen its position in the U.S. markets.

Shares of Green Thumb and Curaleaf are up 39% and 15% so far this year, compared with the Horizons Marijuana Life Sciences ETF's decline of 28.4%. 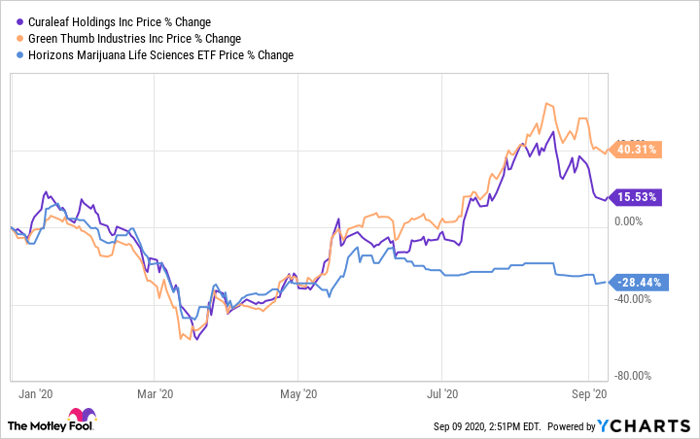 This stock is worth considering for the long term

Green Thumb has established itself as a strong contender in the still-limited U.S. cannabis market, and if you're looking to benefit over the long term, this marijuana stock is for you. While marijuana remains illegal on a federal level, there is no end to the opportunities for Green Thumb -- New Jersey, Mississippi, South Dakota, Arizona, and Montana all have cannabis legalization initiatives on the 2020 ballot. And it's possible that federal legalization could happen as soon as 2022, opening more doors for the company. Its rising revenue, consistent profits, and strong balance sheet will support its future growth.