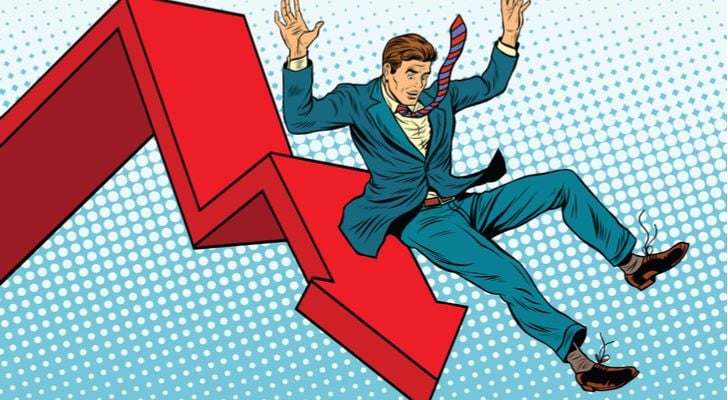 The following are not Dogs of the Dow stocks in 2019, but risky looking price charts hint at looming dogged price action in 3M (NYSE:MMM), Caterpillar (NYSE:CAT) and Apple (NASDAQ:AAPL). And the always real possibility of these companies making that list next year is a strong reason to short MMM, CAT and AAPL stock today.

Dow Jones stocks sometimes go up and at other times, they go down. Mostly these days, it happens to be the case the bulk of these blue-chips go up. For its part the bellwether average is up nearly 15% on the year and roughly 1% removed from its recent all-time-highs.

At the same time, leading Dow constituents Microsoft (NASDAQ:MSFT), Cisco Systems (NASDAQ:CSCO), American Express (NYSE:APX) and Visa (NYSE:V) are up roughly 30% to 35% in 2019.

The gains are certainly nice, as are AAPL stock’s own outperformance of nearly 27%. Still, what goes up does eventually go down. And CAT stock’s relative under-performance of 5% and MMM stock’s decline of nearly 13.50% are testaments of this cyclical certainty. And if the price charts allow, sometimes investors are even offered a well-placed short stock opportunity.

With that in mind, MMM, CAT and AAPL stock are in this technically perilous situation right now and ready for shorting. And if today’s bearish price patterns behave really dogged in 2019’s second half, these three shorts might even land on next year’s yield-driven Dogs of the Dow list for buying.

3M is our first bearish Dow Jones stock to short. MMM stock is the worst performer of today’s three names. And right now, the chart is offering a good entry point to profit from continued weakness.

The weekly chart points to MMM stock following through on the downside out of a bearish flag. The pattern has formed inside a former support area comprised of key Fibonacci levels which failed this past spring and have turned into staunch resistance. 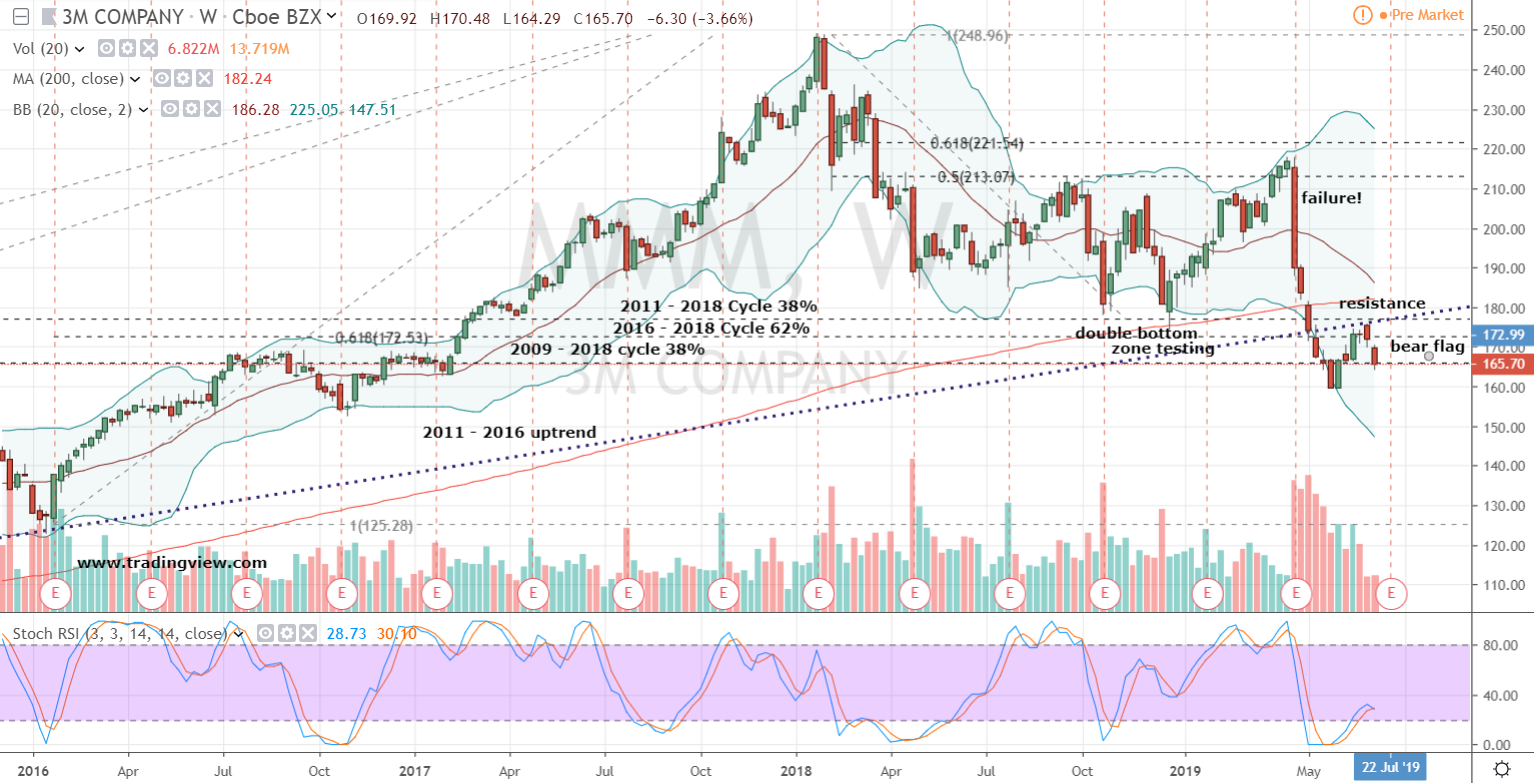 With shares already confirming the pivot high within the bear flag and stochastics forming a bearish crossover from neutral levels, MMM stock looks like a short today. I’d suggest a stop loss of 8% to contain potential losses and smartly exit if resistance is overcome. Optimistically though, a profitable trend for bears could put shares back toward the 2016 lows near $125.

Caterpillar is our next Dow Jones stock to short. CAT stock is already showing relative weakness this year. But if a weekly price chart showing lower highs and a couple bullish trend failures since late last year have any say, conditions are going to get worse. 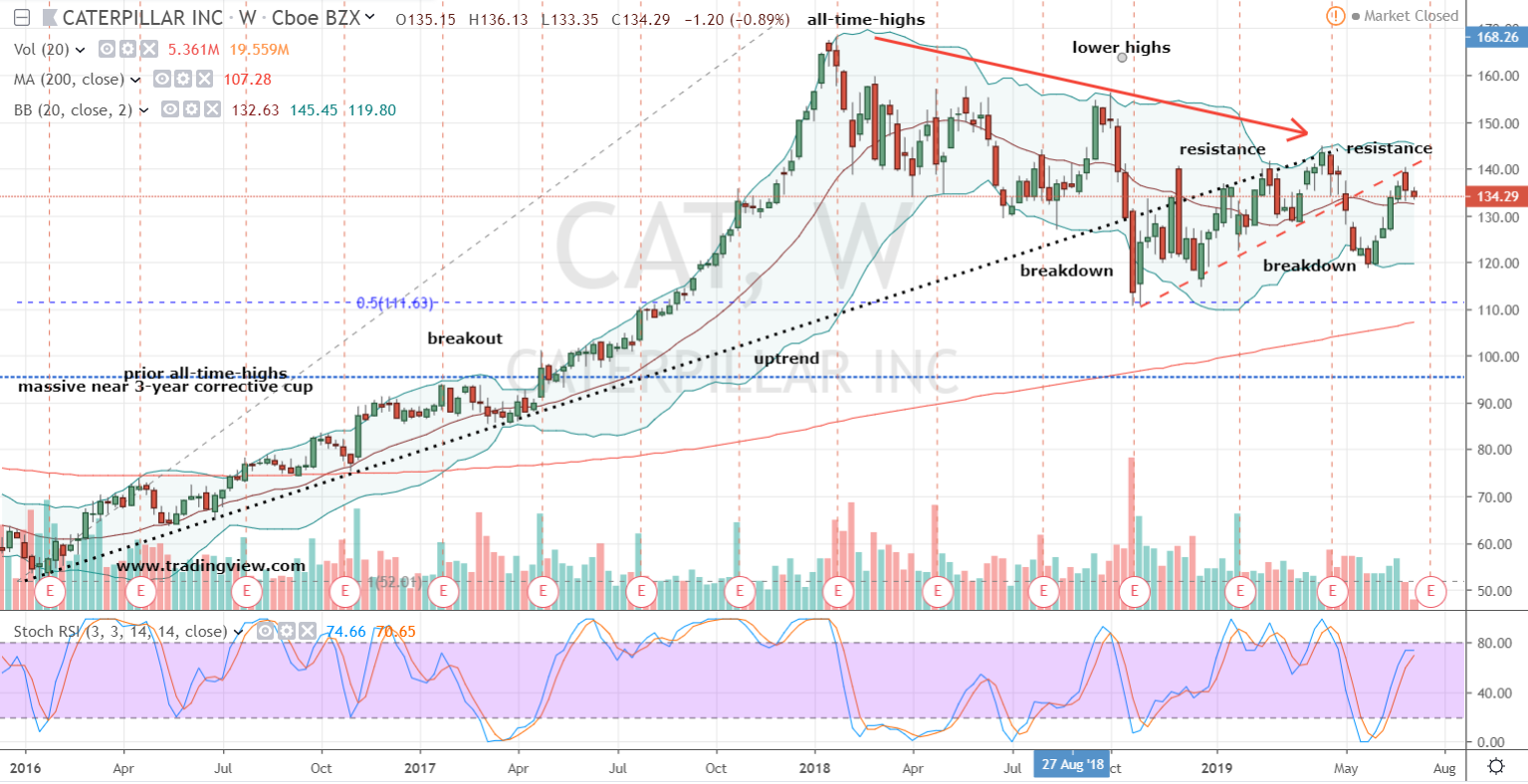 Bearish operators also have a nice spot to short this Dow Jones stock with limited risk and potentially outsized rewards. Following June’s rally, shares have formed a pivot top within a countertrend rally against resistance.

My recommended strategy in CAT stock is to wait on a short through last week’s topping candle low of $133.22. That price confirmation should also help a stochastics set-up that’s currently on the cusp of turning lower and signaling a bearish crossover.

For this Dow Jones stock short I’d suggest a 9% stop and size the position accordingly. Similar to MMM stock, this exit limits losses and closes the position if pattern resistance fails. On the downside, I’d look to take partial and much larger profits on a test of last year’s corrective low near $110.

Apple is our third and final Dow Jones stock to short. AAPL stock’s gains this year are nothing to sneeze at, but a second lower high pivot on the weekly view doesn’t look good. And with price action set against a former trend line, the current cycle’s 76% resistance level and a mostly favorable-looking stochastics position, an AAPL short looks even better. 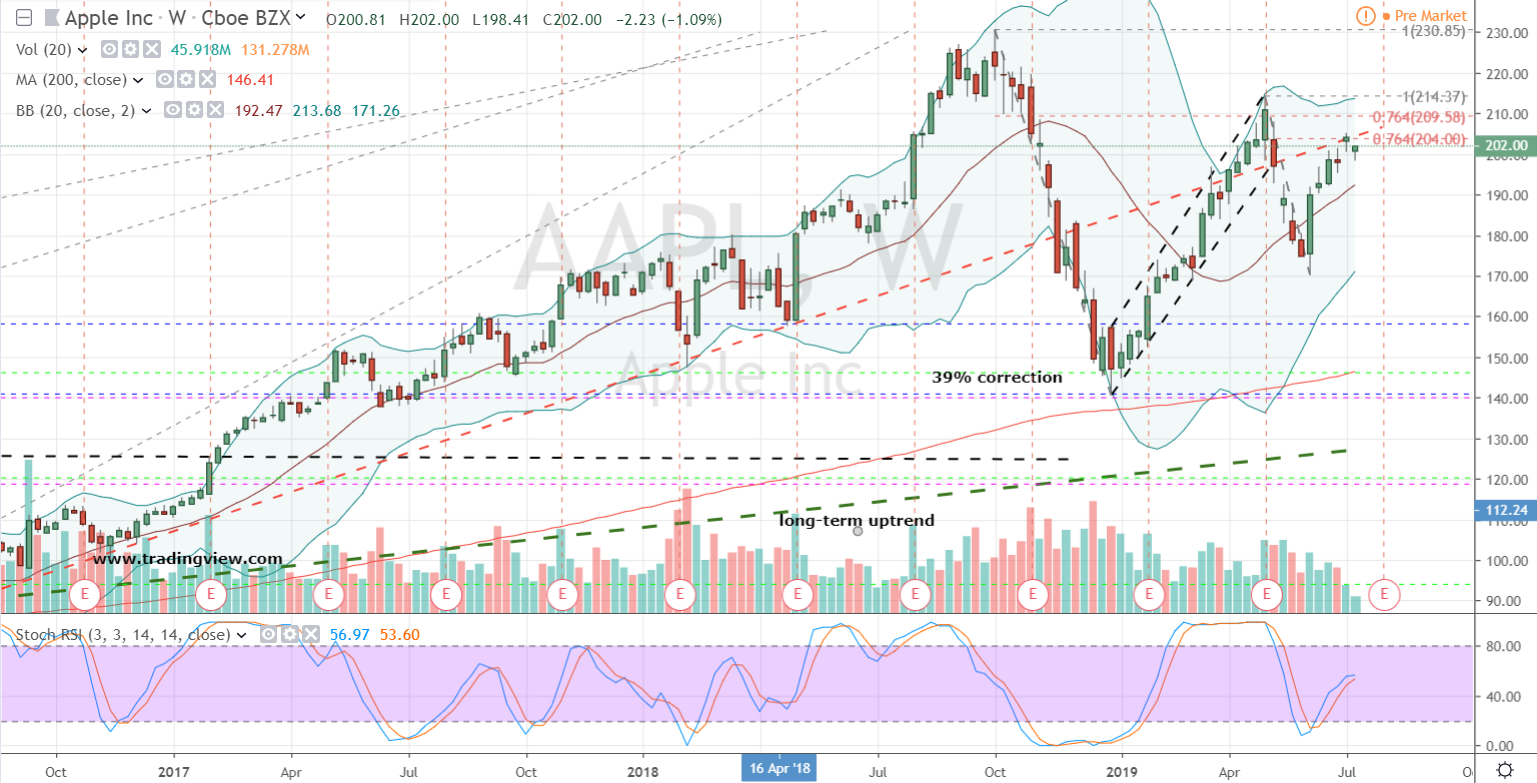 With Apple stock confirming a pivot high this week as shares moved through $200.65, shares could be shorted today while using a stop-loss above the pattern’s candlestick high of $205.08.

Since this Dow stock finished Tuesday modestly above the short signal price, I like placing Apple shares on the radar for shorting on a bearish re-cross of $200.65 for additional confirmation. The entry is also contingent on last week’s high remaining intact and of course, using it for keeping risk well-managed off and on the price chart.