We’re looking for Zacks Rank #1s (Strong Buys) or #2s (Buys) with a Momentum Style Score of “B” or better. In addition to this though, we want these stocks to be at or near their 52-week highs. This combination of upward price action and rising earnings estimate revisions shows stocks that are on the move right now… and should continue that trend in the future.

Below are three stocks that were recently in this screen, but make sure to look at the full list as it changes daily.

It’s been a pretty good year already for ON Semiconductor. Not only is the semiconductor components maker up more than 21% in 2021, but it also recently reported a solid fourth-quarter performance that led to raised earnings estimates.

ON is an original equipment manufacturer of a broad range of discrete and embedded semiconductor components. One of the company’s greatest strengths is its well diversified business, generating a significant percentage of revenues from the computing, consumer, industrial, communications and automotive markets.

The company is also pretty comfortable in making big acquisitions. You probably remember it’s purchase of Fairchild Semiconductor a few years ago, which made it a leader in the power semiconductor space.

On the first day of this month, ON reported fourth-quarter earnings per share of 35 cents, which improved 16% from the previous year and beat the Zacks Consensus Estimate by 25%. This was the third straight quarter with a positive surprise.

Revenue of $1.45 billion was up 3.2% year over year and ahead of our expectations by 6.5%. The company attributed its strong results to the improving global economy, lean inventories and the strengthening automotive end-market.

These demand trends are expected to remain strong moving forward with first quarter revenue of $1.4 billion to $1.5 billion.

Earnings estimates moved sharply higher since the report. The Zacks Consensus Estimate for this year is up 15.5% to $1.64 in 30 days. Expectations for next year advanced by a more modest 4.2% to $1.97.

Most importantly though, analysts see earnings growth of more than 20% for 2022 over 2021. The company is certainly “on a roll”.

Have you made the jump to 5G yet? If not, what are you waiting for? Are you still dialing up for your Internet? Do you still give out a landline phone number? Of course not! So why would you still be using 4G technology? 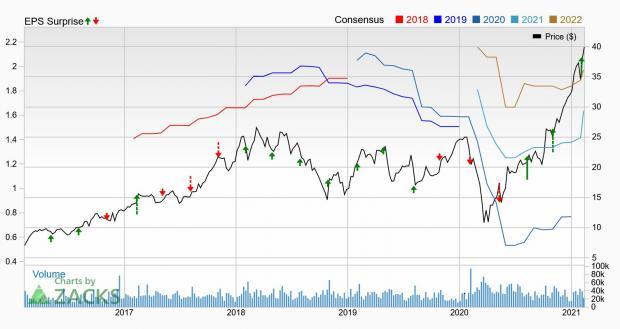 Skyworks Solutions can get you up to date. The company designs, manufacturers and markets a broad range of high-performance analog and mixed signal semiconductors that enable wireless connectivity. It serves a variety of industries, including aerospace, automotive, broadband, cellular infrastructure and smartphones, among many others.

SWKS has benefitted from accelerated 5G deployment and increasing demand for Wi-Fi 6 solutions, which explained the success of its recent fiscal first quarter earnings report.

Earnings per share of $3.36 surged 100% from last year, while also topping the Zacks Consensus Estimate by more than 61%. It was the third straight beat for the company.

Revenue of $1.51 billion was impressive as well. The result was 69% better than last year and more than 42% above our expectations. Interest remains high for its Sky5® portfolio, which supports the next wave of 5G launches at Samsung, Oppo, Vivo, Xiaomi and other Tier-1 players.

But the best part is that SWKS expects continued adoption of its wireless protocols moving forward, which explains why it felt comfortable enough to offer a fiscal second quarter outlook. Revenue is expected between $1.125 billion and $1.175 billion with earnings per share of $2.34. These forecasts were above expectations at the time, leading to a rise in earnings estimates.

For the moment, earnings are only expected to grow 5% year over year. However, we’re at the very beginning of its fiscal year, so there’s plenty of time for analysts to revise higher

Shares of SWKS are up approximately 20% this year, while the Semiconductors – Radio Frequency space is in the Top 15% of the Zacks Industry Rank.

eBay got about a 25-year head start on this pandemic. Founded just a year after Amazon, this auction site was one of the pioneers of the space. Consumers were able to buy stuff through EBAY that it couldn’t get anywhere else.

For a lot of people, this company was their first experience with e-commerce. If there was some obscure, out-of-print item that nobody else ever heard of, then EBAY could probably connect you with another nerd somewhere on the planet that was selling it. However, it has grown quite a bit from those days.

Though nowhere near as big as Amazon, EBAY remains one of the major players in e-commerce. During this pandemic, it’s become an important resource for small businesses to find customers all over the world. The success was on full display in its recent fourth quarter report.

Earnings of 86 cents per share jumped more than 30% year over year and beat the Zacks Consensus Estimate by 3.6%. It has been beating our expectations for several quarters and now has a four-quarter average of approximately 5.6%.

Net revenues of $2.9 billion jumped 28% from last year and bettered our expectations by more than 6%. Gross merchandise volume was up 21% to $26.6 billion. Annual active buyers in the quarter reached 185 million, which was up 7%

Since its quarterly report eight days ago, the Zacks Consensus Estimate for this year has improved 9% to $3.98, while expectations for next year are up 6.6% in that time to $4.51. Therefore, analysts expect year-over-year growth of more than 13%.