3 Reasons To Watch Apple This Week

Apple Inc. (NASDAQ:AAPL) shares are higher today, in territory not charted since their May highs, as traders gear up for the iPhone maker's highly anticipated earnings report, slated for release after the close tomorrow. What's more, AAPL stock should be on your radar for two more reasons this week: it was one of the best stocks to own after the last Fed rate cut (another cut is expected this Wednesday, July 31), and the FAANG stock tends to shine in the month of August.

Below were the 25 best stocks to own a month after the Sept. 18, 2007, Fed rate cut, which was the first of its kind after a period of rate hikes. From that date until Oct. 18, 2007, Apple shares rallied a healthy 23.1%, beating the S&P 500 Index's (SPX) gain of 1.34% in the same time frame, per data from Schaeffer's Senior Quantitative Analyst Rocky White. In fact, AAPL is the only Dow Jones Industrial Average (DJI) component to make the cut. 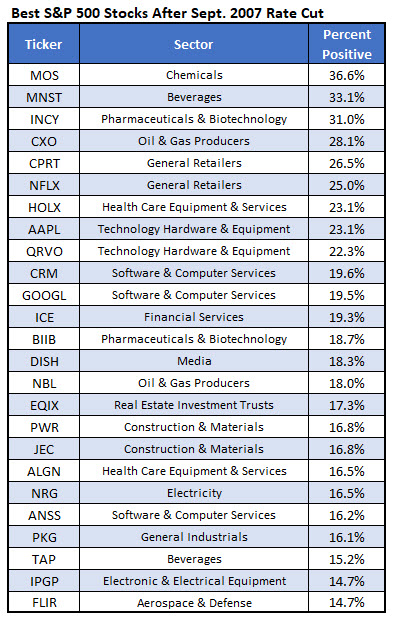 Meanwhile, Apple tends to outperform in the month of August. Over the past 10 years, the FAANG stock has averaged an August gain of 4.45%, and has ended the month higher 70% of the time -- the best blue chip on the list.

That seasonality bodes well for AAPL bulls ahead of earnings tomorrow. What's more, the stock's historical earnings reactions are also encouraging. After the past eight earnings releases, Apple stock moved higher the next session six times, including a 4.9% jump after earnings in May. Regardless of direction, AAPL has moved 5%, on average, the day after its last eight reports.

Since pulling back to the $175 area -- a roughly 50% Fibonacci retracement of its January lows to its May highs -- AAPL has rebounded about 20% atop its 20-day moving average. The shares were last seen trading at $210.08 -- up 1.1% on the day, and in territory not charted in almost three months. Should the equity once again enjoy post-earnings or seasonal tailwinds, the FAANG member could challenge its all-time highs. 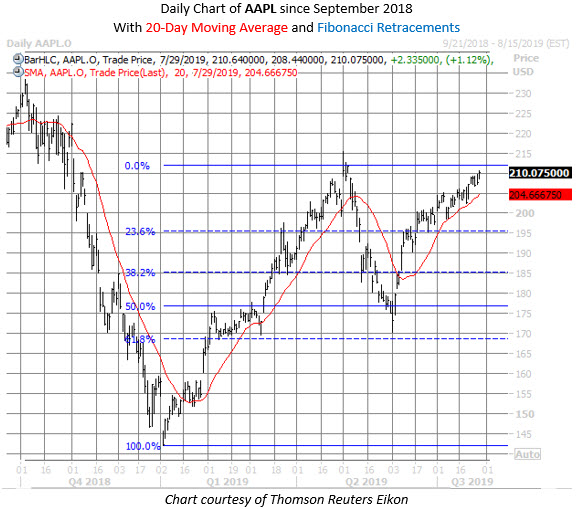 Despite the stock's bounce since early June, options traders have been more bearish than usual during the past 10 weeks. AAPL's 50-day put/call volume ratio at the International Securities Exchange (ISE), Cboe Options Exchange (CBOE), and NASDAQ OMX PHLX (PHLX) sits at 0.80, in the 97th percentile of its annual range. While the ratio suggests more calls than puts were bought to open on an absolute basis, the elevated percentile points to a much healthier-than-usual appetite for long puts over calls of late.