It’s been a wild ride for the owners of Nvidia (NASDAQ:NVDA) stock. After years of jaw-dropping gains, the axe came down hard in the fourth quarter of 2018, with Nvidia stock falling more than 50% in less than three months. It’s hard to remember the last time a high-quality company suffered such a blow.

In late January, NVDA cut its fourth-quarter outlook notably,  resulting in a  15% tumble in Nvidia stock that sent the shares below $140. However, importantly, Nvidia stock did not make new lows.

That showed that, despite the bad news, investors had likely priced in a worst-case scenario. When the company reported in February, it provided less-than-flattering Q1 guidance. That didn’t stop NVDA stock from rallying, though. Now with Nvidia stock near $180, is NVDA a buy? 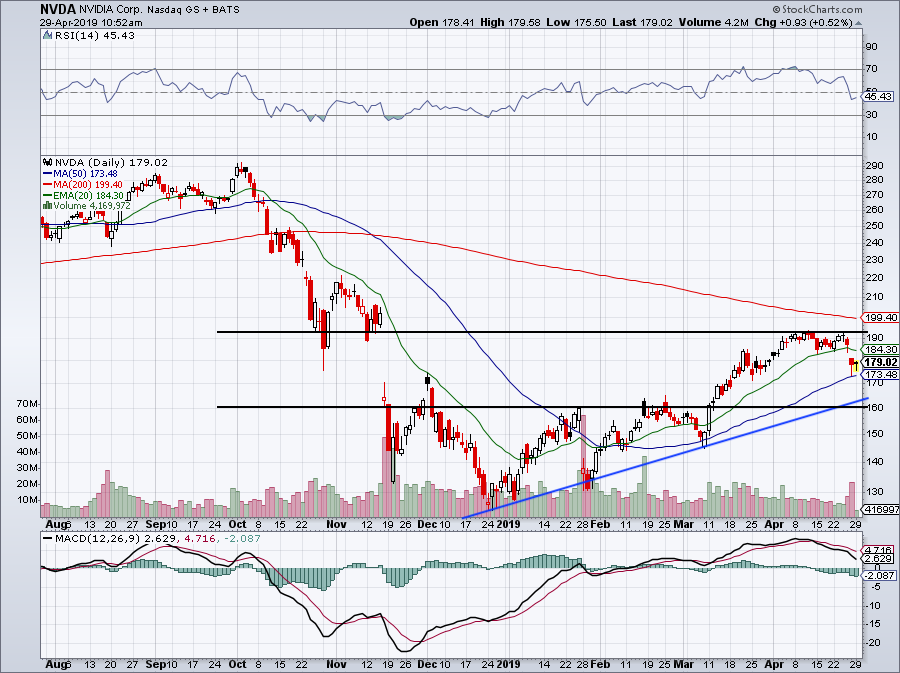 The first reason I like Nvidia stock is its chart. NVDA suffered a continuous flow of bad news in Q1 and either dodged selloffs or rallied despite it. I think that indicates that investors are aware of the bad news and have already accounted for it. Could Nvidia’s situation deteriorate even more in the coming months and quarters? Of course, and its stock may pay the price as a result.

But for now, the technical situation of Nvidia  stock has seriously improved after a tough Q4.

The 50-day moving average continues to buoy Nvidia stock. The $190-$192 level was a breakdown zone for NVDA stock back in November and it’s proving to be resistance on the way up. I like the way NVDA is holding the 50-day, but if it gives way, look to see how it handles $160. If Nvidia stock climbs above the 20-day, the $190-$192 level is back on the table.

Following Intel’s (NASDAQ:INTC) results, investors may be hesitant about Nvidia stock ahead of NVDA’s earnings in May.

Every company is susceptible to the ups and down of the business climate. I suggest going back to watch Nvidia’s GTC keynote presentation from last month. In it, CEO Jensen Huang underscores why Nvidia’s large customer base which spans so many industries makes it a global leader in the chip-making space.

There are several options when looking for computing power and chips, including NVDA, INTC and Advanced Micro Devices (NASDAQ:AMD). Depending on the application, a Nvidia chip may be overkill. But it’s hard to deny that the company’s products are not some of, if not the best, on the market. Among the applications for which NVDA’s chips are superior are autonomous driving, datacenter, artificial intelligence, and robotics.

Listen to the earnings conference call of Microsoft (NASDAQ:MSFT) or Amazon(NASDAQ:AMZN). and you’ll see how well their cloud businesses are doing. It’s possible that the cloud’s growth will occasionally slow or a glut of inventory for datacenter chips will occur. But by and large, data is in non-cyclical growth, as are video games, robotics and other systems that constantly utilize graphics. That dynamic will enable NVDA to deliver solid growth for years to come.

Nvidia stock hit a stumbling block, but the company is building the foundation for tomorrow’s technology.

In the keynote presentation I mentioned above, Nvidia announced a new partnership with Toyota Motors (NYSE:TM), as well as the release of its DRIVE Constellation platform. With NVDA’s Constellation and Pegasus systems both available to its customers,  Nvidia’s automotive segment can become a serious catalyst for Nvidia stock.

New annual sales records could be set. And while automotive is a small business for Nvidia compared to gaming and datacenters, perhaps the shift to autonomous technologies will help investors realize that Nvidia will be a major supplier of chips for vehicles.

Nvidia works with many other automakers aside from Toyota on autonomous technology, including Daimler (OTCMKTS:DDAIF). TM and Daimler are two of the world’s largest auto manufacturers, but NVDA doesn’t work with Tesla(NASDAQ:TSLA).

While Tesla has its own struggles, it’s growing quickly in the self-driving car space. After recently unveiling its own chip, Tesla has the potential to dramatically accelerate its autonomous driving technology. If it does, other automakers will be forced to try to quickly catch up.

Where will they get their chips? Nvidia is a likely source.

Autonomous driving may not be the best reason to buy NVDA stock today, but it could be a catalyst down the road and is certainly one that investors should be aware of in the present.