3 Potential Stocks to Buy Near Support

The stock markets are making new highs — but there are still a few companies that have gone the other way. So today we examine a few stocks to buy near support zones. Specifically we look at the opportunities that may lie within the stocks of Twitter (NYSE:TWTR), Disney (NYSE:DIS) and Netflix (NASDAQ:NFLX). These three stocks have had great stints this year but for one reason or another are now well off the highs.

It also important to note that this week is the heaviest earnings week of the season where Alphabet (NASDAQ:GOOG, NASDAQ:GOOGL), Apple (NASDAQ:AAPL) and Facebook (NASDAQ:FB) report earnings. In addition, we will find out the decision of the Federal Reserve regarding interest rates for the rest of the year. Also, we will get important economic data especially late in the week through the U.S. Department of Labor’s jobs update and Institute for Supply Management’s report. These are all binary events that could wreak havoc on the equity markets. 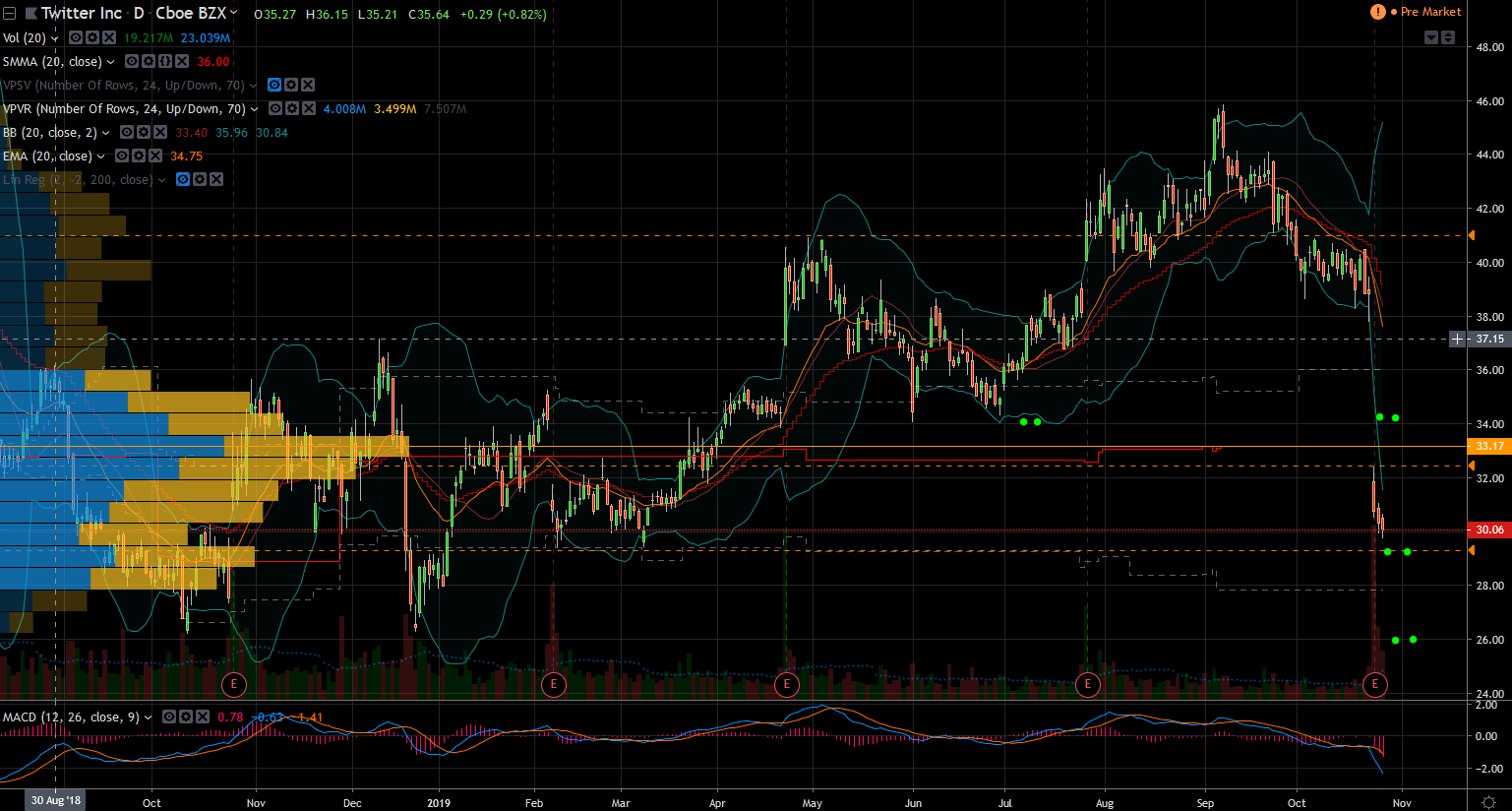 Last week Twitter’s management delivered an earnings report that left Wall Street wanting much more. Consequently TWTR stock fell 20% on the headline — and even more since then. This is while markets are making new highs at a pace that is set by the likes of Microsoft (NASDAQ:MSFT) stock.

Fundamentally, the TWTR report wasn’t a disaster. But it’s the expectations that count even more than the actual score. Management offered a bunch of excuses for the negative guidance including technical issues which may or may not linger going forward. So, they have three months to fix these issues or else the reaction to the next earnings report could be equally as bad.

Meanwhile, there could be relief from the charts. TWTR stock is falling into the base zone for the 50% rally from March of this year. Since then $29.50 is proven to be support so the assumption is that it will hold again. The onus is on the bears to take TWTR lower. Even then, there are the lows of the Christmas crash as secondary support.

If Twitter stock finds its footing then the hard work begins. The early bounce to $33 per share could come relatively easy but the gap will be more difficult to fill. For that to happen I bet that investors will want good reason from management, which means that it would take another earnings report with better news. 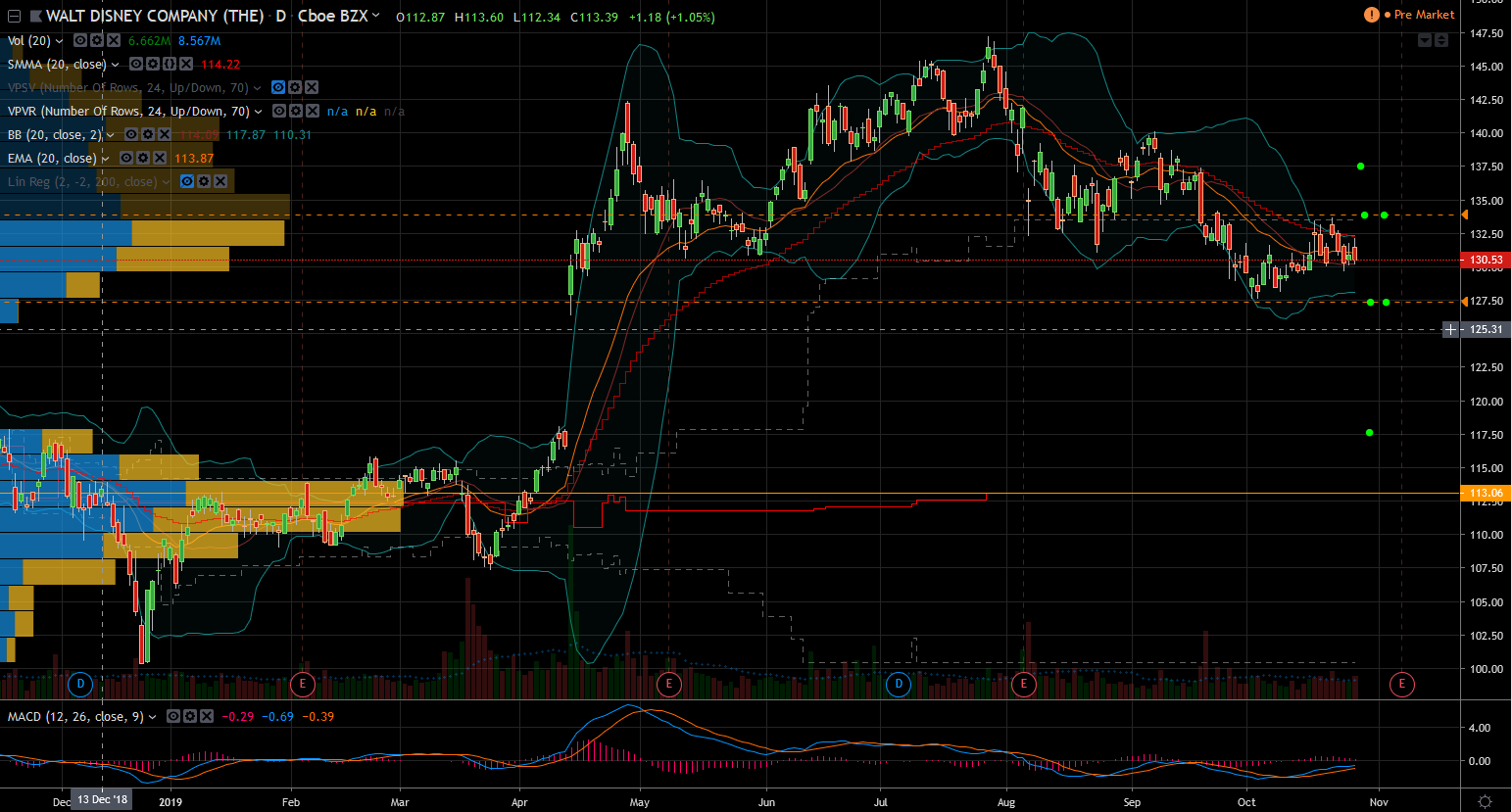 DIS stock suffered a setback off its 2019 high but only because the rally was too enthusiastic. Profits came much too quickly. This usually puts the stock into weak hands. These weak hands then tend to book profits quickly and without good reason. So fundamentally, the story has not changed. It’s merely a matter of DIS stock chopping about to build a better base of short-term investors before it can rally.

The risk on the DIS stock chart is if the bulls lose the $127 line then they could trigger a bearish pattern that would target a gap fill down to $118. Otherwise, buyers could establish a base above the neckline so they can reclaim $140 per share. But there too are lines to cross. Patience will reward those who wait for breakout confirmation above $132.20 and $133.90.

The range in DIS stock is tightening so a move is coming. We will find out soon in which direction investors want to take it next. Fundamentally, the release of the company’s streaming service should be an immense hit. So the metrics from the new signups may give the bulls reasons to cheer. The actual impact on the bottom line will not factor in until months after the release. 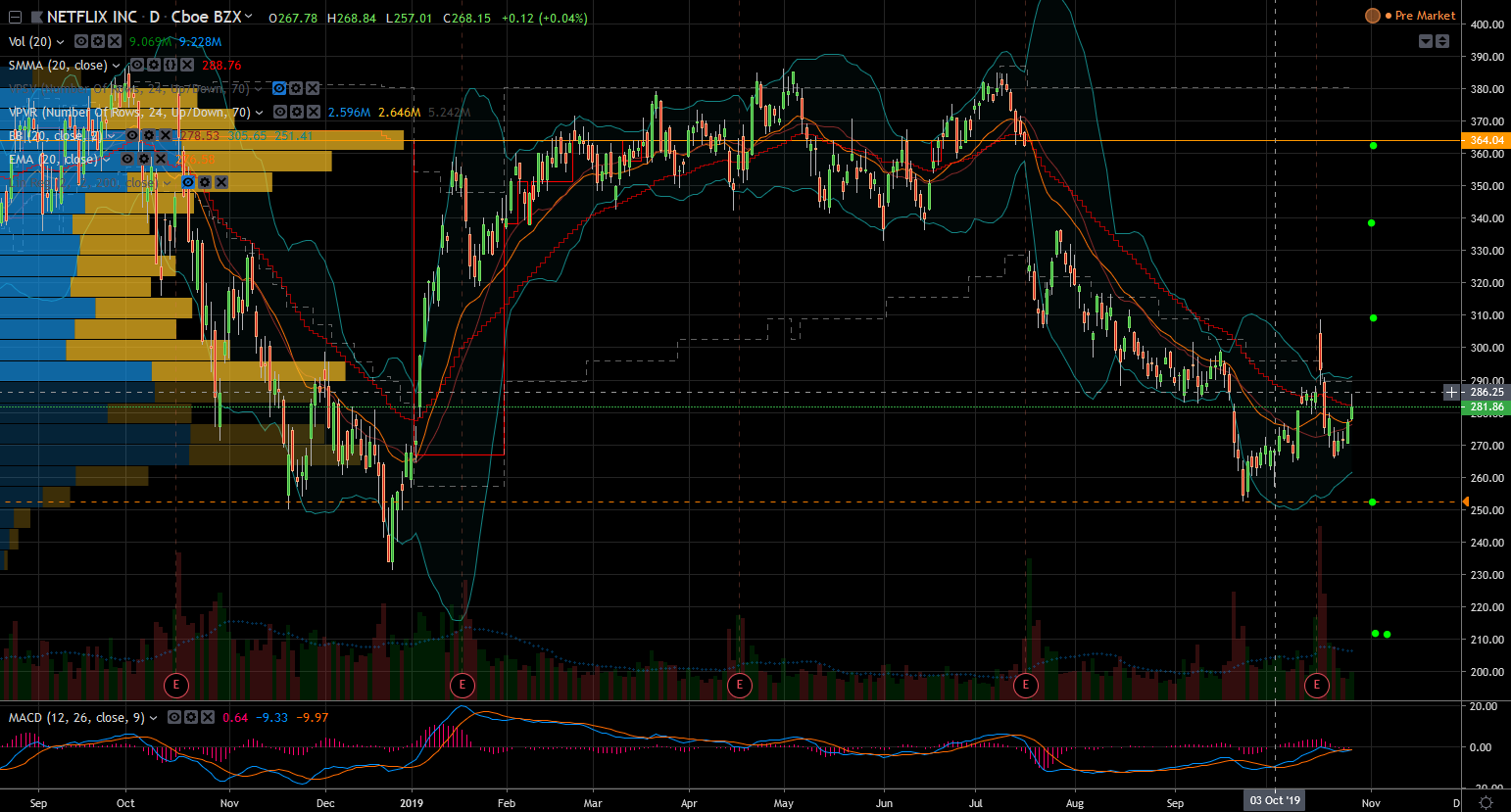 Unlike Disney, NFLX stock’s demise came from fears of oncoming competition. But this is nothing new. Massive companies have been chasing Netflix for a long while. But only recently as the DIS + launch approaches and after Apple announced its streaming service have traders cared about the impact that competition will have on NFLX stock.

In spite of this, the NFLX fundamentals have not changed. New entrants are inevitable. This could be an overreaction that will work its way out of the investor psyche soon.

Recently management reported earnings and after a brief spike, NFLX stock fell 13%. It has since found some footing but it is still mired in the September-October cluster. But therein lies the opportunity. NFLX stock is inside a recently consolidated zone, which also is just above the Christmas crash bottom. Between those two zones, NFLX bulls have support they can count on.

So even though I am not a fan of the earnings report and future of Netflix, I don’t believe that this is the time to panic out of the stock. The bulls have footing and they could remount a rally. If they can take out first $290 then $310 per share, NFLX stock could rally back to $340. Patience is key so it is best to wait for the trigger confirmations in either direction. If support fails, there will be much more pain for NFLX investors.