The global semiconductor shortage is a grave challenge END_OF_DOCUMENT_TOKEN_TO_BE_REPLACED

3 Most Compelling Reasons To Bet Tesla Stock Could Plunge 95% 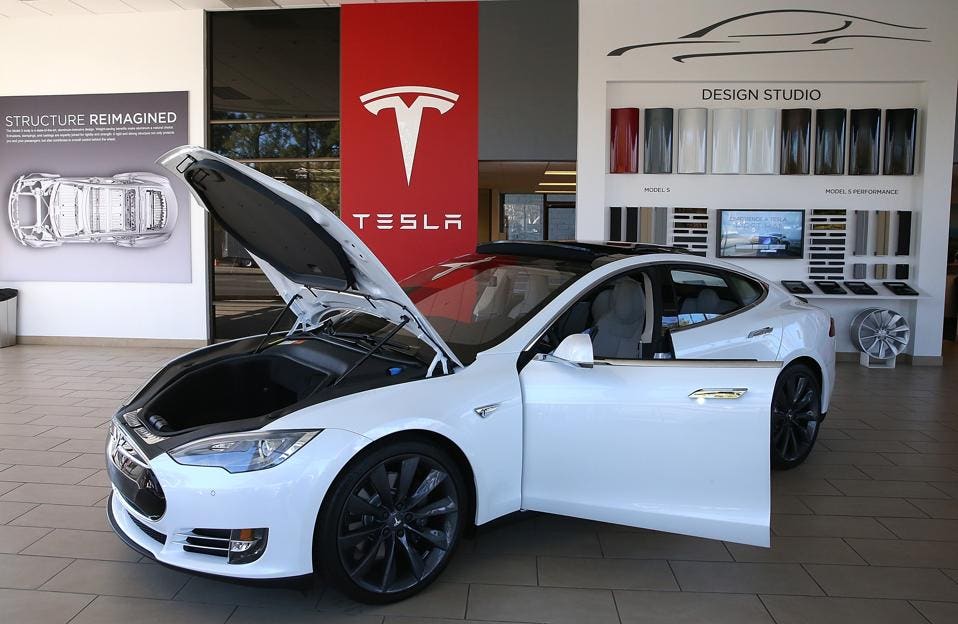 I would not sell Tesla stock short -- but I think its shares could fall much more. Indeed, I see three reasons that Tesla stock could plunge as much as 95% -- and you can profit from this outcome without shorting its shares.

(I have no financial interest in the securities mentioned in this post.)

Before getting into this, let's take a look at how Tesla has been doing lately and why you should not short its shares.

Over the last five years, Tesla has been growing rapidly, losing money, and burning through cash -- and its stock sits about 1% below where it was five years ago. Revenues have soared at a 61% average rate to $21.5 billion in 2018 over the last five years. It lost $980 million and burned through $220 million in free cash flow in 2018, according to Morningstar.

And in the latest quarter, Tesla disappointed investors. According to CNBC, Tesla’s revenue for the quarter fell $650 million short of the $5.19 billion Refinitiv expected and its adjusted loss per share was a whopping $2.21 worse than forecast.  Tesla also delivered 13,000 fewer vehicles during the quarter than the 76,000 analysts anticipated.

I believe that you should short shares of a company -- meaning you borrow the shares from a broker, sell them, and hope to repay the borrowed shares by buying them back at a lower price -- that has a good chance of filing for bankruptcy.

To be sure, many people disagree with me -- indeed about 44% of Tesla's float is short.

Tesla does not have a high enough chance of entering Chapter 11 to warrant shorting it. Indeed, according to its March 2019 quarterly report, Tesla expects that its "current sources of liquidity together with our projection of cash flows from operating activities will provide us with adequate liquidity over at least the next 12 months."

But Tesla is furiously burning through cash. In the first quarter, its operations consumed $640 million, its investments burned through another $305 million -- it's building a Shanghai battery factory and car assembly plant, developing autonomous vehicle technology, and preparing to build Semi trucks and Model Y compact SUVs, according to CNBC -- and its financing activities consumed another $653 million due in part to Tesla's $920 million repayment of a convertible note -- a topic I discussed in January.

Yet it does face three huge business challenges that have caused some analysts to predict its shares could plunge.

A big reason that Tesla stock rose in the past was its ability to grow faster than expected.

But two Wall Street analysts outlined bearish scenarios in which Tesla would fall way short of volume forecasts in China.

For example, Adam Jonas of Morgan Stanley envisions a scenario in which Tesla stock plunges to $10. That bear case scenario forecasts that due to tariffs and a slowing economy, Tesla sells roughly half the number of vehicles in China envisioned in Morgan Stanley's base case forecast -- "an average of 165k units annually in China from 2020 through 2024 at an average price of around $55,000 per unit,” according to Barron's.

Citi’s Itay Michaeli is more optimistic than Jonas -- envisioning that Tesla shares could fall 82% to $36, according to CNBC. Michaeli argues that the stock could fall further despite its recent capital raise because of "lingering demand/FCF (free cash flow) concerns.”

Things must be looking bad at Tesla for CEO Elon Musk to focus the company so heavily on cost-cutting. I am guessing that he is struggling to raise sufficient capital to cover its cash burn rate -- due to a more pessimistic cast in investor sentiment.

Last week, Musk told employees in a memo that they would need to take “hardcore” measures to cut costs. “It is important to bear in mind that we lost $700 million in the first quarter this year, which is over $200 million per month,” according to CNBC's report on the memo.

Michaeli suggests that this memo made him question Tesla's previous investor guidance -- of 90,000 to 100,000 vehicles sold in the quarter ending June 2019, according to Tesla's April 25 conference call.

Musk is among the latest in a long line of American confidence people. Their charisma seems to make people want to believe that they are superhuman -- able to defy those who think they are not above the rules that limit what people can say or do.

But what happens when the spell breaks? As we saw during the financial crisis of 2008, investor sentiment can change rapidly and the debt that companies glibly refer to as liquidity can evaporate overnight.

Indeed it is unclear that suppliers and banks would be eager to extend more credit to Tesla if it keeps falling short of its promises. Michaeli seems to think this is possible. According to his note,  "The implications [of falling short of guidance] can be serious, since an automaker’s balance sheet is always subject to the confidence ‘spiral’ risk."

To bet that these bear case scenarios become real, you could buy put options. Here is a hypothetical example -- you could buy an option that gave you the right -- but not the obligation -- to sell 100 Tesla shares for $200 a share in May 2020.

As MotleyFool explains, if the option was selling for $2 a share, you would have to pay a $200 premium for the option. If by May 2020, Tesla shares trade at $300 a share, your option would expire worthless and you'd lose your $200 premium.