3 Marijuana Stocks to Buy Before They Spark Back Up

Though the mania surrounding the marijuana stocks has dramatically subsided from its 2018 peak, pot stocks still have very dedicated fans on Wall Street. Trading them remains exciting as they constantly go on extended runs, in either direction. There is little doubt these are momentum stocks, which also makes them tricky to trade.

The underlying thesis for investing in cannabis is simple. Fans should simply own the pot stock shares for the long-term and ignore the short term action.

These are intrepid companies working hard to establish a new sector for investors. They have tremendous headwinds, most importantly the fact that marijuana is still illegal at the federal level in the United States.

Eventually this will have to change because it’s unlikely that those states that have legalized pot will reverse their decisions. Therefore, it is very logical to expect that the U.S. will make it federally legal to be in the business of cannabis.

Today we examine the three companies that are likely to be there for that headline. Meanwhile, they continuously make headlines of their own in the sector. They are:

Marijuana Stocks to Own for the Long Term: Canopy Growth (CGC) 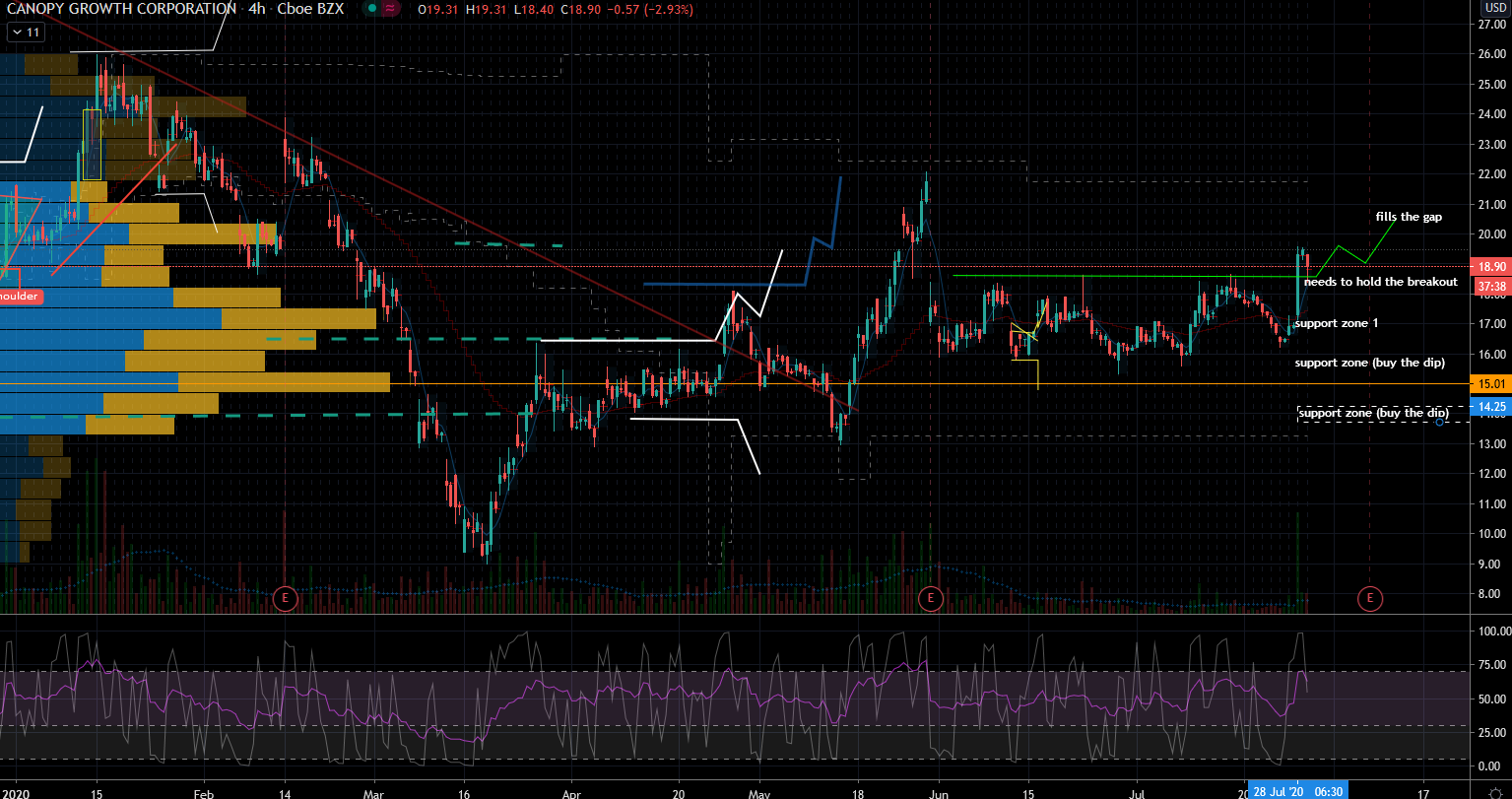 Canopy Growth has the most name recognition of the cohort after receiving a $4 billion investment from Constellation Brands (NYSE:STZ) in 2018. This legitimized CGC as the leading company in the field with the best odds of success. Having a massive balance sheet opens a lot of doors. It also makes it a lot easier to overcome the obstacles that it and the others are facing.

The fundamentals are still challenging because many of the original hurdles still exist. However since CGC stock is 68% off its highs, the metrics have improved a great deal. Investors now should have more confidence that most of the froth has been eliminated. The company still loses money, but at least their price-to-sales is a fraction of what it was during the hype bubble. That being said, they are by no means cheap.

Knowing how to read charts makes it much easier to actively trade CGC. Trying to time positions based only on gut nstinct is fraught with danger. Case in point, on Monday I shared a video on the potential upside in CGC stock and it rallied 10% within hours.

Clearly these are wild stocks, so they do make for great trading vehicles. Buying as it approaches $22 per share comes with short-term risk of losses. The stock is coming into a prior fail zone, placing the onus on the bulls to overtake it. The better trade would be to chase the breakout from there, as it invites more momentum buyers to target $26. Conversely, the better entry point is to buy the dip near $17.

Longer-term there’s no reason to short these companies yet, mainly because of the potential legalization headline rally. Bulls have the advantage of time, which makes shorting them with conviction hazardous. Meanwhile there are plenty of trading opportunities available for those who are more active. 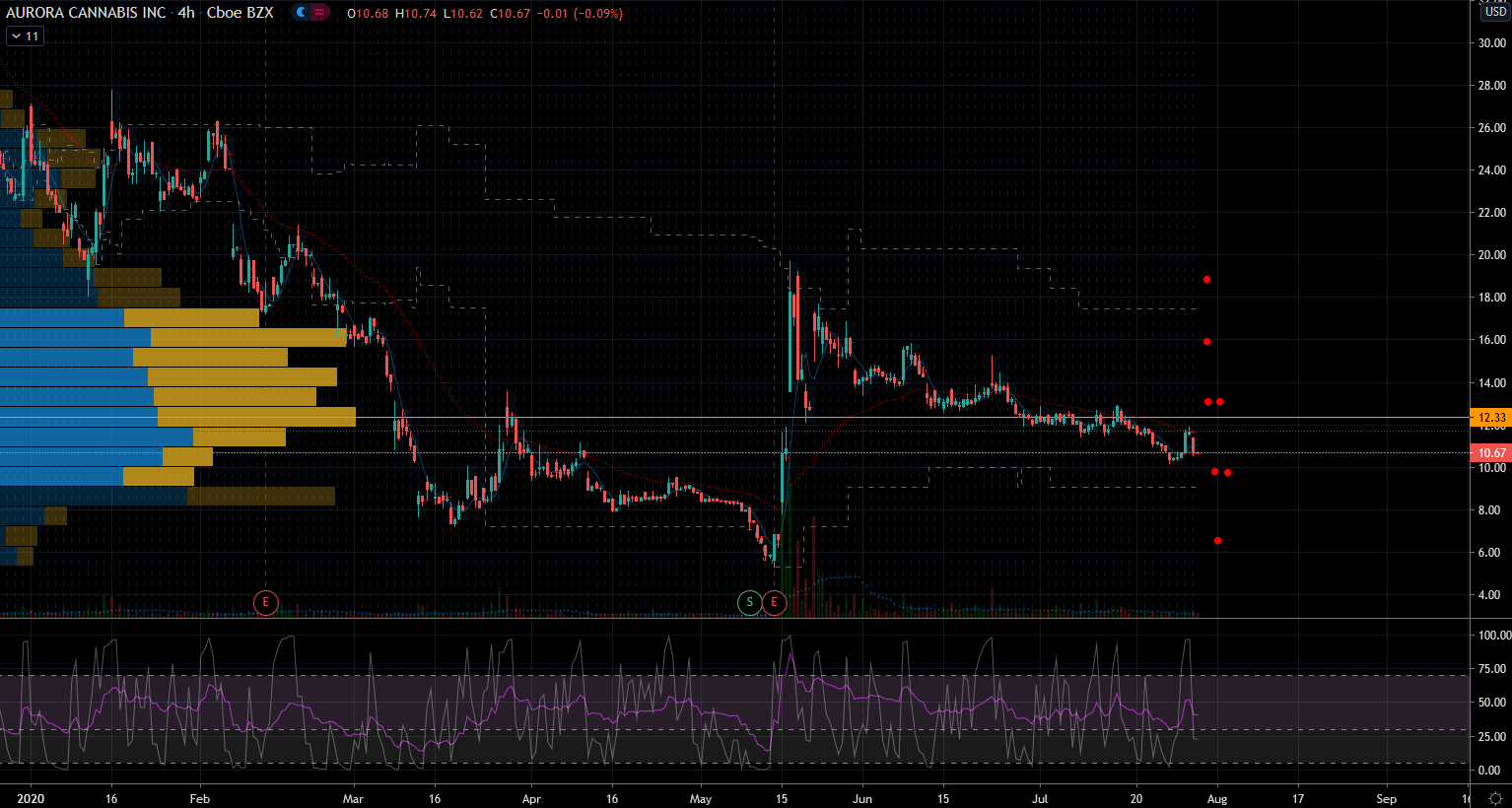 Typically I wouldn’t advise you trade stocks doing reverse splits just to remain relevant on Wall Street. ACB stock recently split 1 for 12 in May. But luckily for Aurora, management backed up the maneuver with good headlines.

As a result ACB stock spiked 240%, thereby justifying the stock split, at least for the time-being. Now the bulls have to defend $10 as best as they can so they don’t fade back to the lows from which they just sprang. And they’ve already given back 60% of the rally.

ACB stock still has a strong fanbase among investors. Even though its fundamental metrics are far more reasonable than during its heyday, ACB is almost three times more expensive than CGC and sports a price to sales above 60.

Those are lofty expectations that the bulls have stuffed into today’s stock price. Nevertheless, much like the concept of investing in CGC, here too investors should either believe in it for the long term or simply trade the short-term price action.

The closest triggers for that purpose are at $12 and $12.9 for the bulls, versus $10 for the bears. The breach of either of those lines will carry momentum in that direction. The potential size of the breakout could carry ACB stock to $16 where it has a lot of resistance, while the breakdown would risk to close the gap at $6.9. Its is best to wait for the triggers before chasing. Buying ACB near $10 for the long term as an investment is also a viable strategy. 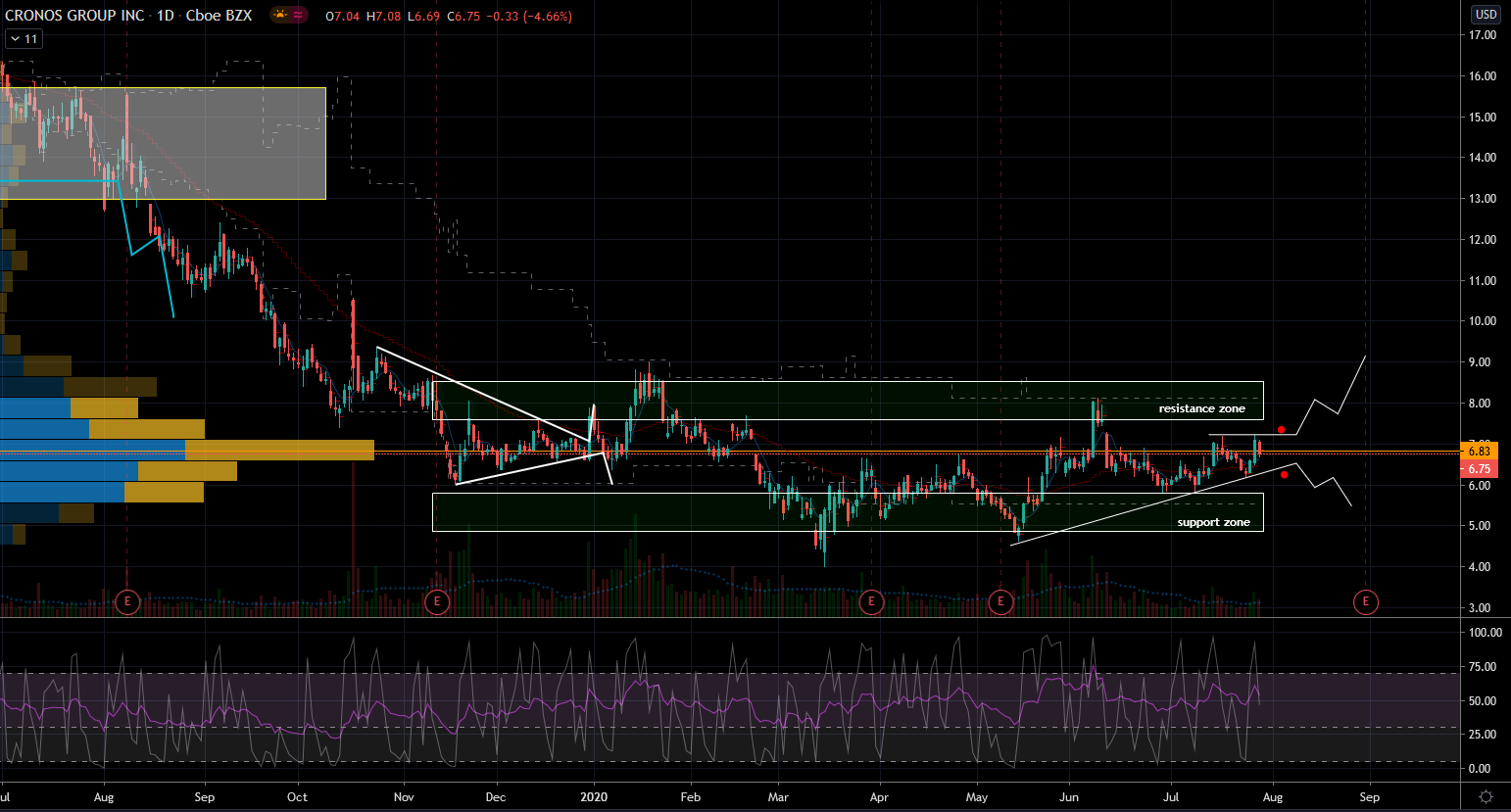 Of the three companies discussed here, CRON stock is the most expensive, trading at 100 times its full year sales. This is five times more than CGC and almost four times that of ACB.

For an absolute comparison, that’s as high as the price-to-sales of Zoom Video (NASDAQ:ZM). That’s a lot of investors’ hopes for future growth baked into the stock now. This is the equivalent of offering to buy a store for 100 years worth of sales today. That screams overstretched.

Regardless, the stock chart has important information suggesting how far investors are willing to go. It is 70% below its all time high and 70% above the recent March lows.

This is also the volume profile point-of-interest for the last four years. This is the spot where both bulls and bears have been most active, so it is likely to be sticky. The bulls will need to work hard to rally out of it, and the bears will need help from negative headlines to set new lows.

Specifically, there are trigger lines at $7.25 for the buyers and below $6.10 for the sellers. The stock is stuck between resistance and support zones. For the short term, the price action is likely to ping pong inside of said range until the breakout. Long term the thesis here and regardless of valuation is still to buy and hold for the long term success or Cronos.

These marijuana stocks are saddled with all kinds of challenges. This is not only limited to the larger producers like these three but also at the sales outlets for the industry. These tend to be small businesses that are learning on the go how to handle the growth. They are not so different from the potato chip model where wholesalers have to compete for shelf space. This will take time to mature and it looks like they won’t stuff this jack in the box back into its container so might as well accept it.