3 Large-Cap Stocks Ready to Break Out

Santa is back after a year’s absence. But if you think you’re too late to enjoy this seasonal gift giving Wall Street style, think again. Large-cap stocks Netflix (NASDAQ:NFLX), Target (NYSE:TGT) and Chipotle (NYSE:CMG) are being gift-wrapped on their price charts. And combined with money management, bulls are being offered the possibility of big-time and merry profits, while avoiding potential Grinch-like behavior.

Much to the relief of large-cap bulls, 2019 hasn’t been a December-to-remember like 2018. That’s not to say it hasn’t been memorable. The promise of a seasonal strong Santa Claus rally has been bestowed upon Wall Street with the major averages rallying strongly to fresh all-time-highs to cap off a very solid fourth quarter.

Another less jolly truth is investors are riding the fumes of this past week’s phase one trade deal. It could mean profit-taking is around the corner. Alternatively, maybe something like FedEx’s (NYSE:FDX) earnings-driven bag of coal triggers an unwrapping of those gains? Or what if less-spirited worries, such as this year’s yield-curve scare come back to haunt Wall Street like a Grinch of Christmas’ past?

The point is risks always exist and bullish investors shouldn’t take a friendly trend for granted. So, while the large-cap S&P 500 is on track for its best year since 1997, just remember to wrap today’s breakouts with money management in order to enjoy the gift that keeps giving. 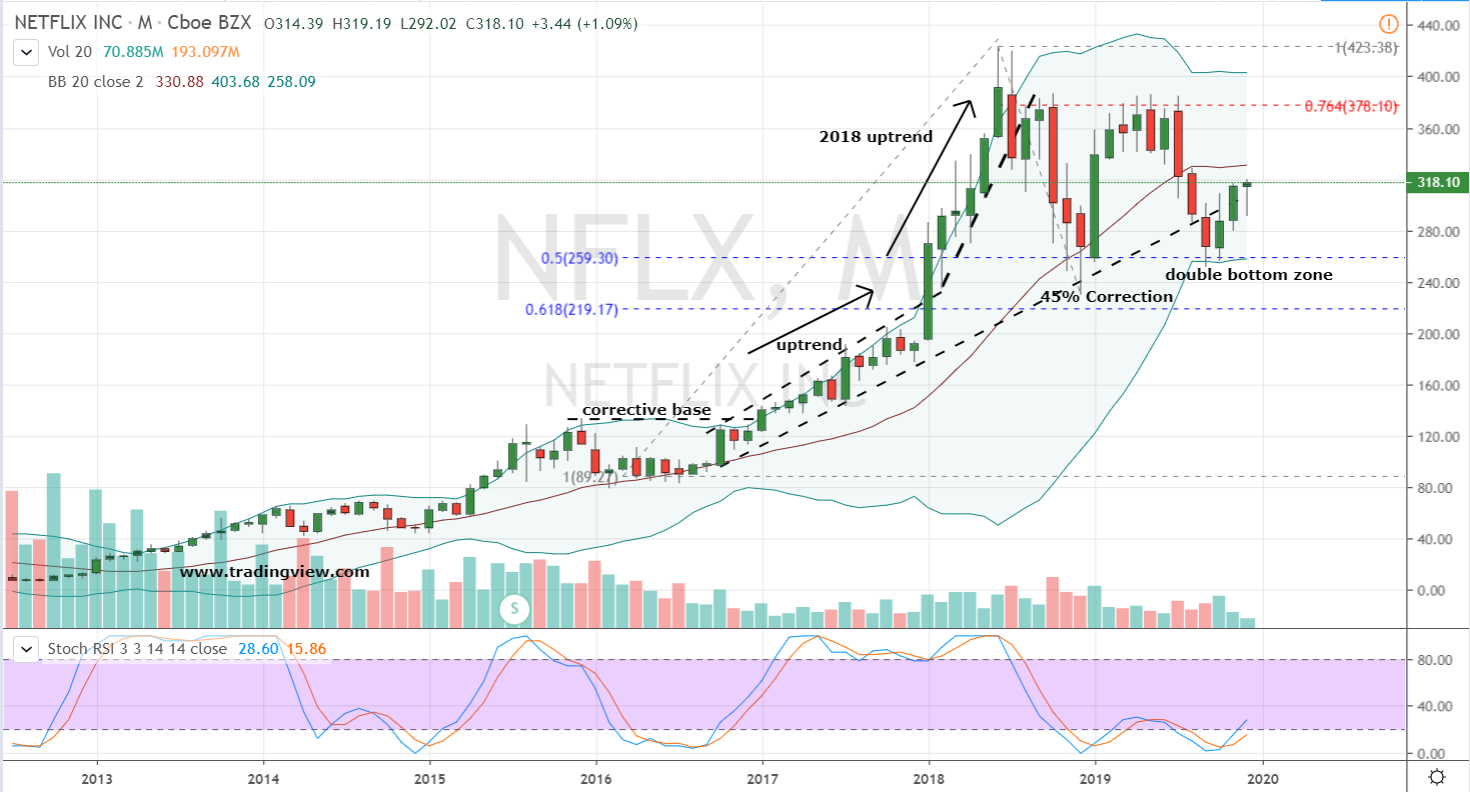 The first of our large-cap stocks breaking out is Netflix. Over the past couple months, NFLX stock has confirmed a higher-low double-bottom as part of a massive correction. Over the last few weeks, shares have begun to rally and reaffirm the possibility that a major low is in place.

More recently, this week, NFLX has reclaimed a long-standing uptrend line while breaking out to a four-month high. With stochastics backing the price action, Netflix is a large-cap in position to buy today.

Trading NFLX Stock: Buy NFLX shares today. I’d recommend an exit strategy tied to a stop-loss below $299. This effectively contains risk off and on the price chart of this large-cap stock if needed. It also looks great relative to taking profits and reducing exposure near $380 and NFLX stock’s year-to-date mid-pivot pattern high. 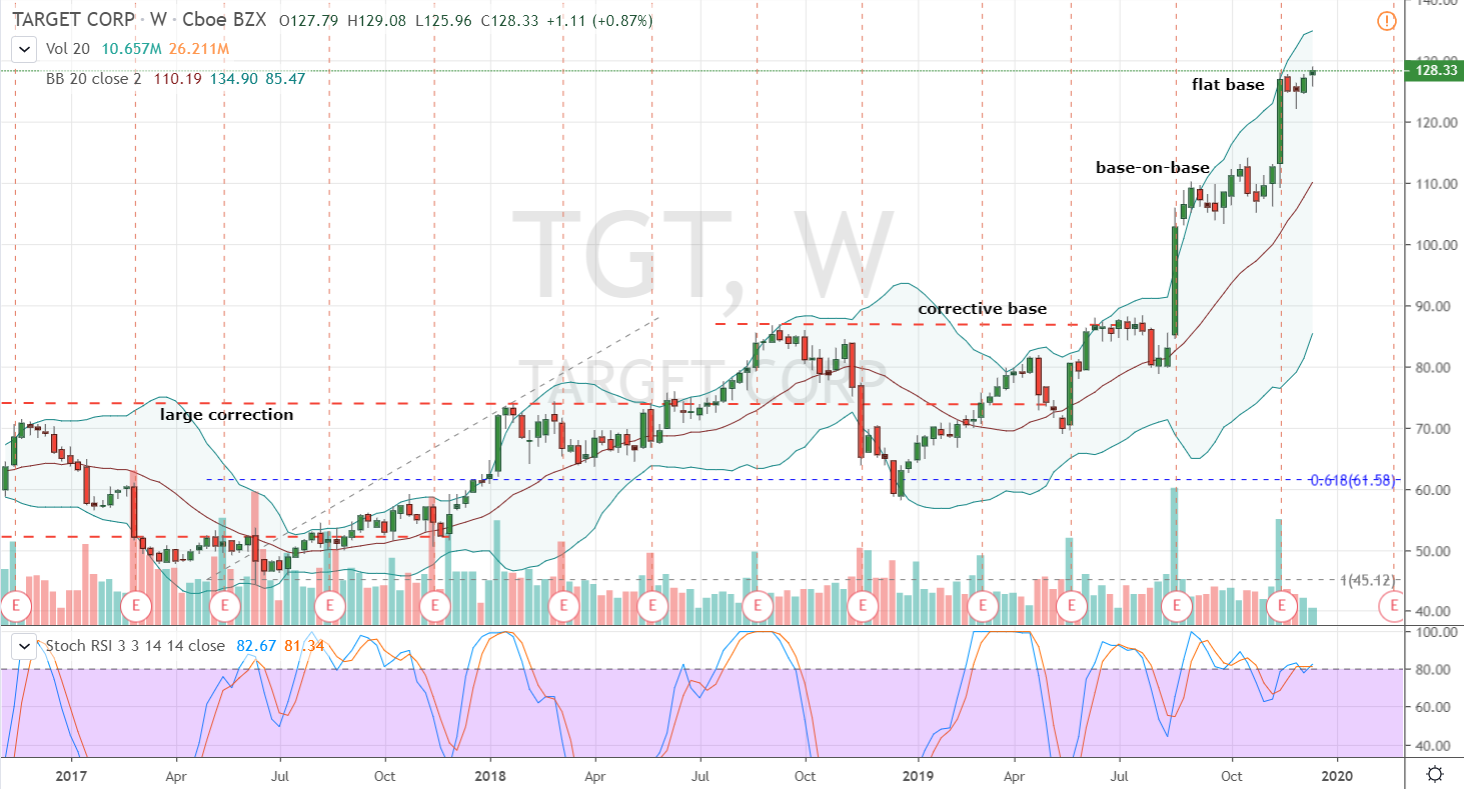 The second of our large-cap stocks to buy is retailer Target. A solid earnings report, which easily topped Street views and offered an upwardly revised profit outlook sent shares rocketing higher. In the month since those results were released TGT stock has put together a small flat weekly base just under a month in length.

Now shares are breaking out. I’ve never thought of this large-cap stock as a momentum name, but this year’s rally of more than 90% defies that judgement. What’s more, with the weekly Bollinger Band still in a climbing position and stochastics signaling a bullish crossover in overbought territory, TGT stock is a breakout to buy today.

Trading TGT Stock: Buy this large-cap stock today. I’d set a price target of $150 on shares for taking initial profits and use the pattern low to complete this technically inspired gift. 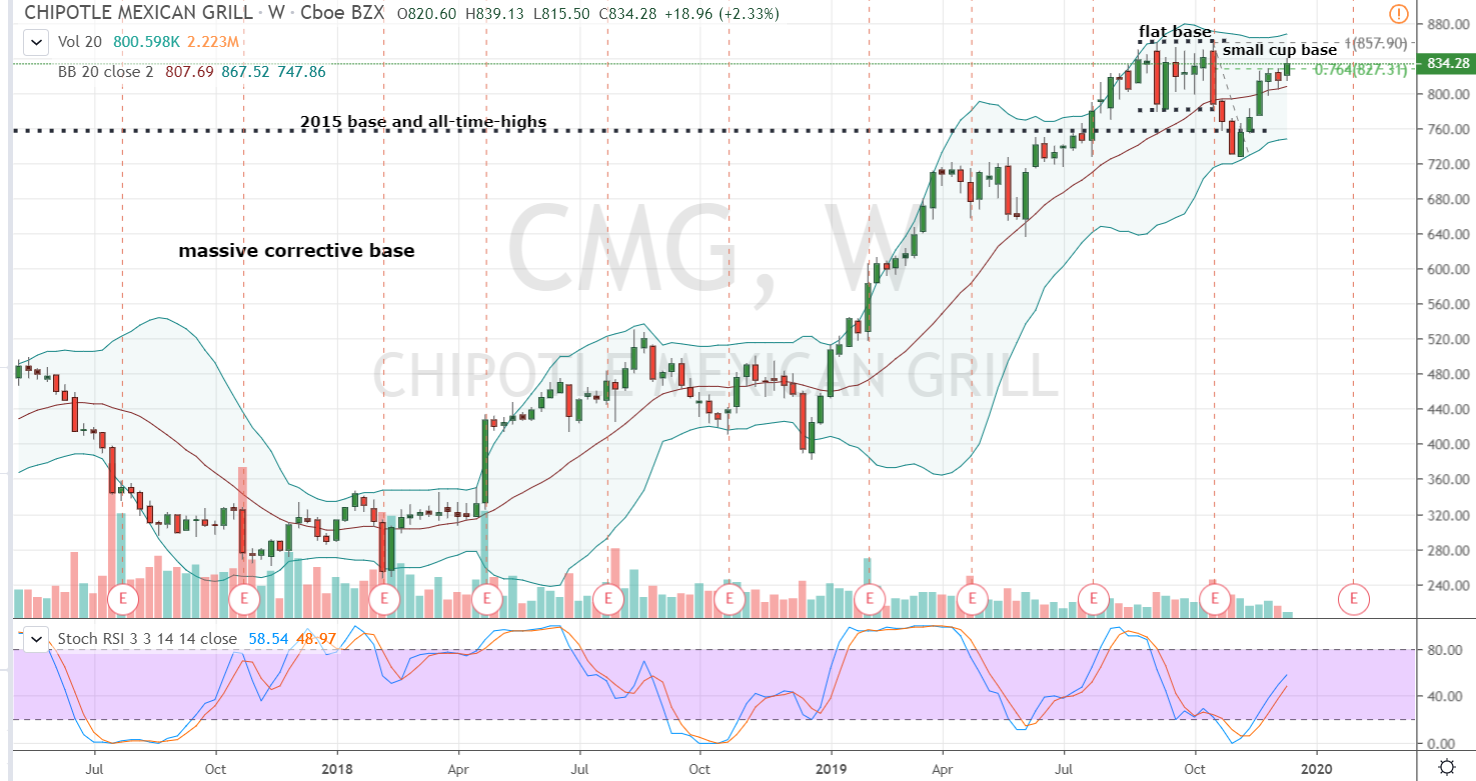 The last of our large-cap stocks is fresh-fast restaurant chain Chipotle. Shares have been sizzling the past two years following a painful stretch of food scares and required cleaning of house by management. And CMG stock doesn’t appear to be finished delivering solid returns to its investors.

Currently, shares of Chipotle are positioned in a small, corrective cup-shaped base. It developed after a modest rally through this large-cap’s prior all-time high from 2015. The price action also follows a flat weekly base, which looked great, but ultimately broke down before ever breaking out.

In total, the combination of this base-on-base structure looks compelling. Now, and with CMG stock’s stochastics trending higher and shares breaking out of a small handle consolidation inside the cup-shaped pattern, there’s no time like the present to buy this large-cap stock.

Trading CMG Stock: Set an exit beneath the handle low of $798 to keep exposure looking smart on and off the CMG stock price chart. And without being too hopeful, I’d look to take profits at fresh all-time-highs above $900 and possibly an even friendlier $1,000 in 2020.