Market volatility is up in recent sessions, and END_OF_DOCUMENT_TOKEN_TO_BE_REPLACED

As tech takes a tumble this week, there END_OF_DOCUMENT_TOKEN_TO_BE_REPLACED

Three growth stocks to invest in now target companies that could rise the way Amazon, Microsoft, and Apple have flourished by identifying and seizing opportunities.

The three growth stocks to invest in now have the potential to boost revenues and earnings faster than giant growth companies that face the high hurdle of keeping up their pace of gains from the past. In contrast to value stocks, which typically pay dividends, the promising growth stocks identified below aim to give their shareholders capital appreciation from increases in their respective share prices.

Investors often still expect technology giants to grow like hot startups but those big stocks cannot sustain the momentum, said Hilary Kramer, who heads the GameChangers advisory service, which has booked 21 profitable trades among its last 25 transactions. The best days of those companies to grow quickly could be behind them, she added.

3 Growth Stocks Do Not Include Amazon

Amazon reached $50 billion in market capitalization a decade ago and subsequently amassed an additional $800 billion in wealth, Kramer told me. To duplicate that growth, Amazon would need to turn into a $18 trillion company before 2029, Kramer continued.

To sustain Amazon’s current “67 times earnings valuation,” it would need to book $250 billion a year in profit on $6 trillion in annual revenue, Kramer said.

That whopping revenue total would equal the entire U.S. retail economy, said Kramer, whose 2-Day Trader advisory service has notched 15 out of 17 profitable trades with an average return of 13.76% and a holding period of less than one day since its launch. There are growth opportunities for Amazon but the best investment opportunities on the retail front could be companies that are worth $50 billion right now and have the climb to the $850 billion market capitalization level of the world’s biggest online retailer.

Investors need to exercise caution with other big growth stocks such as Microsoft, which accounts for 10% of NASDAQ, since its “great run” could be ending, Kramer said. The company’s rate of growth is “slowing,” she added.

Microsoft is a stock that is crowded with buyers who are seeking a “safety” investment, Kramer continued. The “immediate upside” for mega-technology growth stocks has dimmed but “pockets of more dynamic growth” remain available for investors who know where to find it, Kramer added.

Envestnet Is One Of 3 Growth Stocks To Invest In Now

As one of three growth stocks to invest in now, Envestnet has the potential to become the Amazon of finance, Kramer predicted. Envestnet offers online wealth management and insurance solutions.

Its mergers and acquisitions activities produce at least 10% growth annually, even in slow years, Kramer said. Envestnet’s returns literally have “run rings around” stocks such as Apple, she added.

Plus, Envestnet’s valuation of 31 times earnings right now will look “cheap” in the future, Kramer continued. The company’s stock price dropped as the market reacted to the news of a fatal car accident on Thursday, Oct. 3, that killed Envestnet’s visionary Chairman and Chief Executive Officer Jud Bergman and his wife, Mary Miller, when the cab they were riding in was struck by a vehicle heading the wrong way on a San Francisco highway.

Envestnet’s stock price opened on Oct. 4 at $51, down 6.54% from the close the previous day. However, the company named Bill Crager, who had served as Envestnet’s president since 2002, and chief of its Envestnet Wealth Solutions business unit, to become interim CEO. Ross Chapin, an independent member of the company’s board of directors, agreed to serve as interim chairman.

The stock since then has recouped those gains and climbed even higher to $60.42 on Oct. 11. The seasoned management team at Envestnet is expected to steer the company forward and investors should not expect any sudden change of course or strategy, Kramer said. 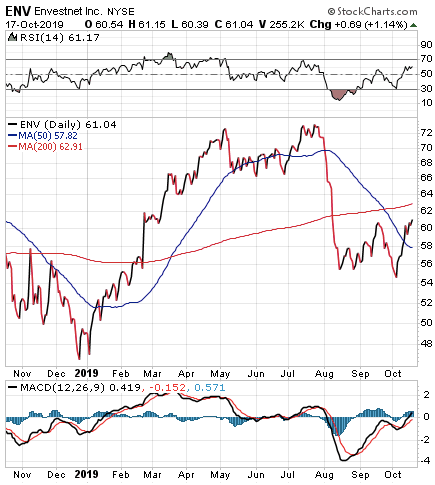 The second of the three growth stocks to invest in now is Texas Roadhouse Inc., which has dropped in price since May but now offers a reduced entry point to purchase the restaurant chain’s shares. Texas Roadhouse now could be undervalued since it is ramping up its revenue twice as fast as the S&P 500, she added.

A chance to buy its shares below a valuation of 26 times earnings is rare but investors can do so now, Kramer said. She advised seizing upon the pullback to purchase shares and recommends the stock in her GameChangers advisory service.

Restaurant stocks sometimes take a hit when the economy weakens and consumers limit dining out to save money, but Texas Roadhouse has a concept of offering barbequed food, free peanuts and other distinctive items that could help it to retain many of its core patrons. Bargain hunters who like to buy stocks when they are low may find now a good time to acquire shares of Texas Roadhouse before they heat up again. 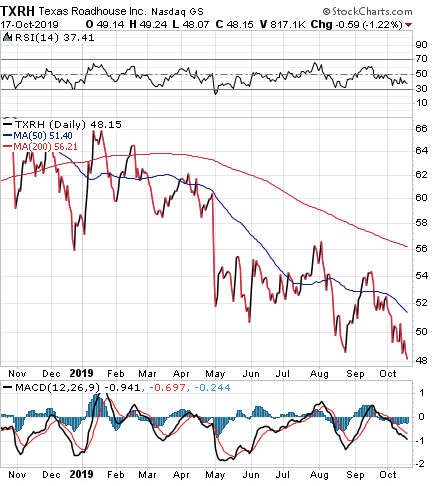 Roku a provider of streaming television entertainment, is the last of the three growth stocks to invest in now. One appeal is its 86% annual growth, said Kramer, who seeks underappreciated stocks in her Value Authority advisory service. Advertisements and other services form 67% of Roku’s revenue and are spurring growth of 86% a year.

In comparison, services account for 19% of Apple’s business, which is growing at a much more modest 23% a year than Roku, Kramer said. For that reason, Roku seems to be the better investment, she added. 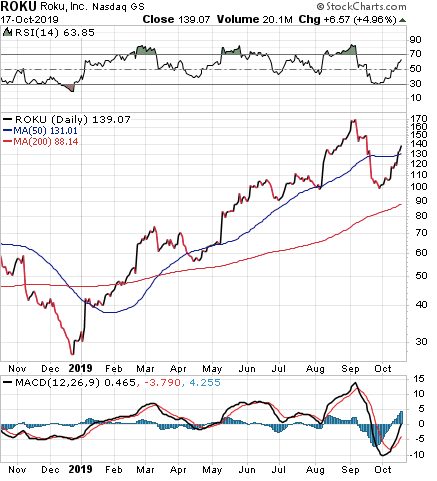 Economic weakness, negative interest rates in Europe, rising government debt, trade wars, global conflicts and action in the U.S. House to impeach President Trump are weighing down the markets, but investors still have three growth stocks to invest in now that should fare well, despite the external risks.

Since valuations of these three growth stocks to buy now compare favorably to established growth stocks that are slowing their climb, investors willing to put money into less well-known companies could find a winning formula.